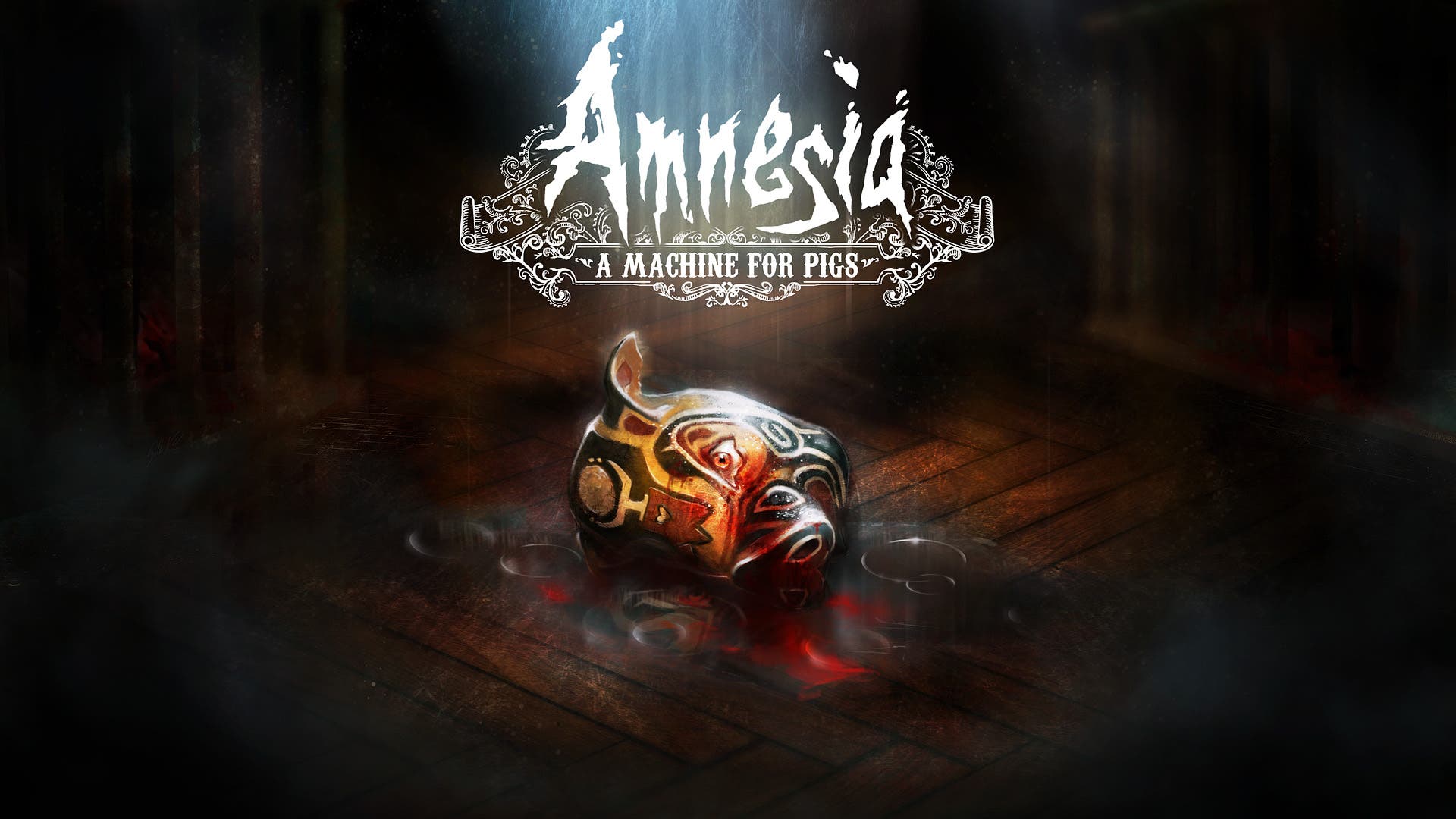 Amnesia: A Machine For Pigs Review

While not a direct sequel, Amnesia: A Machine For Pigs is more thematically connected to 2010’s Amnesia: The Dark Descent. Frictional Games has handed the lantern over to ‘Dear Esther’ creators, The Chinese Room. It is unfortunate that during the transfer, the tension was a bit lost on the developers. You awaken in a room with the same amount of knowledge as the character you play, Oswald Mandus (which is none). It seems he has, you guessed it, amnesia. Immediately you begin asking questions about the environment you woke up in. Why are all these cages in the bedrooms? Who is this person calling me on the telephone? Where are my kids? Was that a pig? And thus starts out your exploration and learning about yourself and what went wrong.

In true adventure game tradition and keeping with the Amnesia style, you’re restricted to the first-person perspective. And it’s all flight, no fight. Combat is not allowed here, and is welcome for this survival horror game. If you’ve played The Dark Descent, you’ll notice that A Machine For Pigs lacks any kind of inventory used to store items other than writing notes on event happenings and keeping pages that are strewn about tables and floors. In a stark contrast to the first game, your lantern never runs out, nor is there a necessity to stay hidden or worry about being in the dark too long to risk your sanity. These changes make sense in the overarching plot, but don’t give the same sense of dread of the double-edged sword gameplay rules you had to abide by before. Interaction is kept to a minimum, only allowing you to play with switches, some drawers, chairs, and lights. The puzzles that prevent you from progressing, are straightforward and present very little challenge to complete. It is insulting to anyone’s intelligence when the answer to a puzzle is finding an item and plugging it into the slot that it came from. But there’s a certain pleasure of pulling away a painting to reveal a switch that reveals a hidden passageway.

This time, you aren’t confined to just the indoors, you’ll be able to step out into 1899 London and see factories and tall buildings in the distance, giving you a sense of place. The rest of the game remains indoors, traversing to sewers, churches, cellars, and reactor rooms with tesla-like devices. All unique and interesting to look at as you progress.

Early on, you only get a glimpse at the creatures that you’ll come across, and then go a long, uneventful period of time without ever seeing one again. These huge, lumbering pigmen have deep growls rather than high-pitched squeals, and pack quite a punch. When nothing is happening (which is quite often), you develop a fear of fear itself which exacerbates with each step you take. Once something does happen and you’re being pursued, your senses overload and the screen warps as you run hoping to break line of sight. Though, being killed is of little to no consequence as you’ll respawn slightly closer to the exit. The game is dark, even with the gamma turned up all the way is almost pitch black in some areas. Near the beginning of the game, it has weird banding and odd texture issues. They did end up going away on their own. While there was significant improvements in making your hand look less like a penguin in the first game, and now more like a human’s hand should look, the visuals haven’t improved enough it all looks dated. Gone is the Lovecraftian aesthetic, the new steampunk-inspired look matches the era and feel at the turn of the 20th century.

The sound design perfectly compliments the look by making each step you take thunderous, and cacophonous – often spooking yourself. Other sounds of vents releasing steam, lights flickering, infernos blazing, and barrels mysteriously rolling around hold the atmosphere together. Voicework is well done and there’s often telephone conversations between the protagnoist and a stranger on the other end urging you forward and keeping you interested.

Jessica Curry’s music is a beautifully haunted collection, where each track is telling a different story beneath the action taking place before you. Amnesia isn’t broken, or even buggy. But what it is, is a convoluted mess of a story that does little to fill you in unless you explore every nook and cranny for exposition. Even then, you may not have answers for the questions you seek. There are plenty of scares, but in great moderation from what you’d expect. A Machine For Pigs short run time of only 4 hours, and confusing ending will leave you thinking you had amnesia.