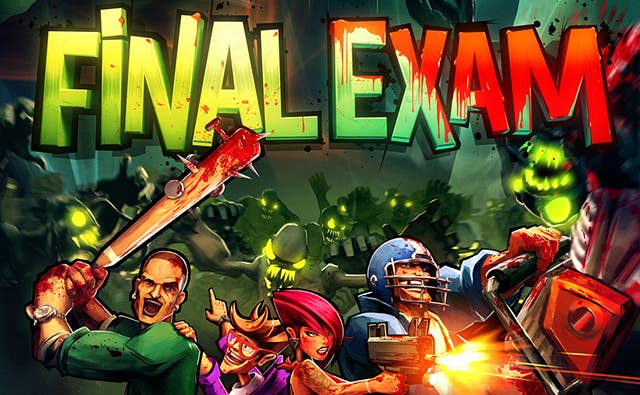 Originally given the confusing title of ‘Obscure’, as the developers who eventually formed Mighty Rocket Studio, have already made a game called Obscure. The game itself isn’t obscure, and is a clear and focused game that is well worth your time and money. The game starts off innocently enough as four former students are headed back to their old high school for a major party, but instead of crashing the party, crash their car due to monsters roaming the streets. The incidental story just serves as a cause for progression across each of the levels.

Each of the playable characters are roughly the same, with little specialization. As you play, you’ll earn skill points in which to upgrade your character. They all fall in the same categories of passive and special skills. Every character can use any of the twenty weapons found in the game. But in order to use them, they first must be found in a level to be used.

The aforementioned skill points are awarded for performance. The better the score, the more you scavenge for weapons, and hidden items, there will be more skill points given out so you can actually upgrade faster. This encourages replayability on past levels and exploring more. Co-op supports up to 4-players, online and off. Regardless of difficulty, the game scales the enemy count to match what’s on-screen. Each of the difficulties also felt appropriate, and is expertly balanced. Every level takes about 30 minutes to get through depending on how much you explore, and can be completed in roughly 4-5 hours.

Leaderboards are pretty interesting, and worth a mention. Everyone is on the same playing field, despite using different characters and difficulties. The only thing that separates them is the level that was played. This makes it so the leaderboards aren’t too segmented and comes down to chasing scores rather than specific filters. All versions of the game are identical. Now, as I played primarily on the PS3 version, it runs at 720p and 30fps, it is likely the same for the Xbox 360 version. The PC version does more than 1080p and locks at 60fps. There’s no definitive version here, play it anywhere you can. The differences in the frames per second are marginal and both handle enemies and explosions without the framerate suffering..

I just absolutely love the art style in this game. Colors are fully saturated and just absolutely pop off the screen with such an intense vibrancy. Character animations move with fluidity and great speed. It’s such a treat just to sit and stare at this game. Final Exam is hands-down, the best co-op experience I’ve had this year. It is a top contender for most enjoyable 2.5D sidescrolling platformer for 2013. Whether playing solo, or with friends on the same couch or online, there’s a lot of fun to be had in short bursts or playing the game in one go. The content and the price point is hard to beat.