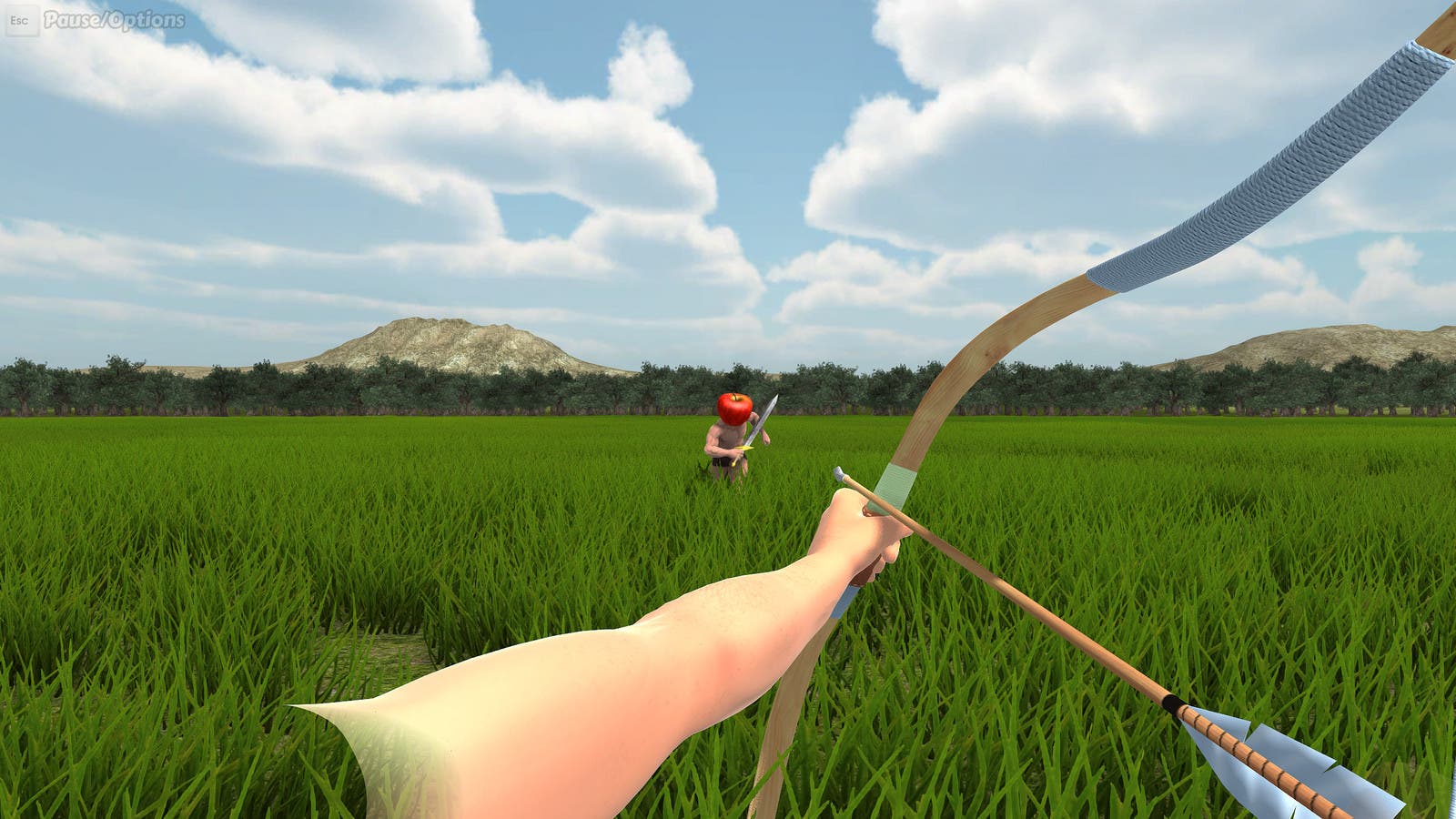 Real-life archery is very difficult. It requires strength and many hours of practice to get right. Probably Archery is also very difficult in a virtual environment. Is this a problem? Probably. The developer has been open to citing the game’s influences: QWOP, the difficult flash game in which you control a runner’s legs to get him to go 100m, and Surgeon Simulator 2013 wherein you are a doctor in a morbid, interactive version of Operation. Each of them has their place, but South East Games has essentially both games into one to provide a great party game for you and friends to laugh at each other’s missteps.

Whether playing with a controller, or a mouse & keyboard, moving your character’s independent limbs to come together to be able to sling an arrow into a bow and shoot with any precision is a monumental, hilarious, and excruciating task. You manipulate the left and right arms, as well as bending the wrist, elbow, and moving the shoulders to be able to work together in concert. Only the concert is a bunch of improperly tuned instruments all playing the wrong song. The game’s singleplayer modes span eight modes. Among them are Targets mode for both stationary and moving, Eggsterminator where you are essentially a bull in a china shop tasked with only taking out winged eggs, a William Tell tribute: Don’t Miss, Berserker, akin to Serious Sam with the enemy running straight at you and you explode, The Noose – a time based mode to save someone from certain death, among a few others. Besides target practice, every other mode requires precision or speed in order to be successful. While initially this can provide a few laughs, doesn’t last for long.

The game’s visual style is quite basic, but looks very good with swaying grass and moving clouds up high. You can customize your character’s arms and head, my favorite being mechanical arms like a Terminator and the head of a basketball. Editor’s Note: The Oculus Rift is supported, but was not tested.

I was unfortunately unable to find any multiplayer matches to play, whether I tried Quick Match, Team Deathmatch, or Co-Op Horde. I even created a match and let it sit, and no one joined. So sadly, this portion of the game did not get reviewed, but won’t be adversely scored. It’s just a shame no one is playing it.

In addition to the archery MP, there is Zoccer. It is a unique multiplayer mode where you are equipped with a cricket bat for taking out zombies meandering on the field, and kicking a larger than normal soccer ball to the goal while the other team would naturally try to stop you from doing so. This is a refreshing and exciting distraction to the main game. But again, as I wasn’t able to find an online match, I could only play this solo, which wasn’t fun without any opposition. Probably Archery isn’t a bad game. You are a bad player, and it takes practice and patience to become qualified to play any of the ancillary modes with any kind of precision and skill. Frustration will win out long before that. And that’s a shame, because Probably Archery has a lot to offer that I don’t think many will get around to seeing.

A Steam code for the game was provided by the developer, South East Games for review purposes