Infected Planet is a squad-based, real-time strategy game with tower defense elements set in a universe similar to “Starship Troopers”, sans the camp and unfortunate lack of Casper Van Dien. The foreboding sense of being overwhelmed at any point is the great dynamic between the fast-paced action and strategic nature of suppressing the enemies spewing from their hives.

You’ll start with a lowly 5-man squad out to eradicate a planet of 100,000 bugs. It doesn’t seem like there’s that many, but once you see the sheer numbers of creatures filling your screen at any one time, you’ll believe it to be true. There’s no real story to be had as to how things came to be, and given the pacing of the game, there’s simply no time to explain it all. Blocks of text start each mission for what you need to do, but doesn’t get prevent you from getting right back into the action.

As you’re brisked from mission to mission, you’re required to destroy and capture enemy hives by any means necessary. You can select your Marines one-by-one or as a group and guide them to where they need to go. Shooting is automatic except when you want them to use rockets on enemy buildings.  Along the way you’ll earn BP that can be used only in-mission to create turret defenses to protect your capture points or mobile healing stations that a squad member must lug around. Enemy hives can have their own defenses such as acidic turrets and proximity mines to deter you from easily taking back the planet. Squad members can die but aren’t permanently lost, and after some time will respawn at the nearest capture point. You can sacrifice a marine for BP in a crucial moment needed for victory, but run the risk of being overrun with one less man. The choice is all yours.

Everything ends up playing samey in way that isn’t as refreshing as when you first started. Luckily, the ability to purchase permanent upgrades and temporary buffs give the game the much needed variety it lacks in other areas. In any given mission, once you’ve unlocked the upgrades to do so, you’ll be raiding enemy hives with attack choppers, officers that boost morale, flamethrowers, and shotguns. 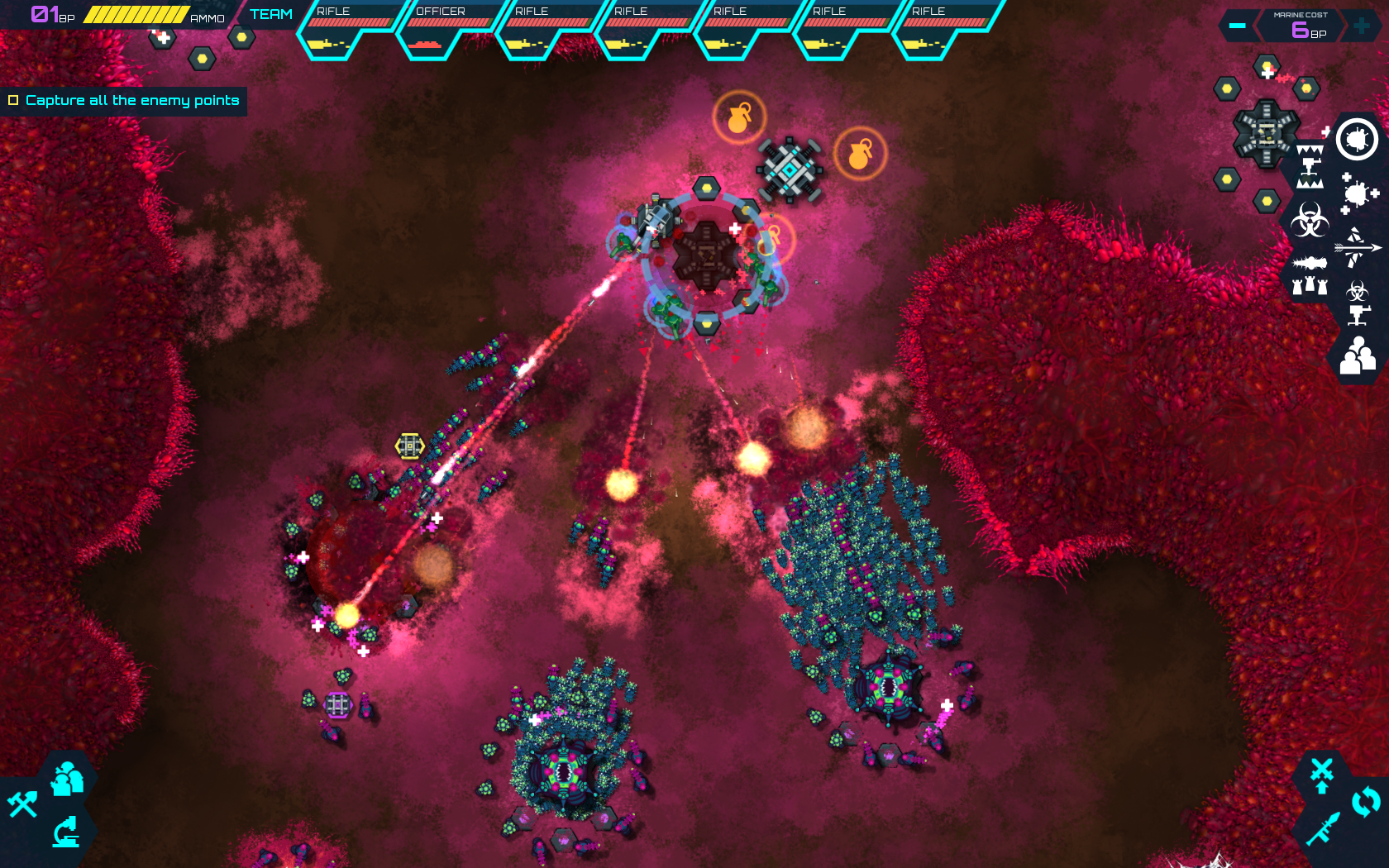 The most unfortunate thing about Infested Planet is the color choices of the Marines and the aliens. They’re the same, exact colors – blue and green. Why this is, I don’t know. But in the thick of battle and being completely surrounded while zoomed all the way in, it is nearly impossible to tell where your Marines are unless you drag-select the entire screen to find them. This happened to me a lot more than I’d like. And as some maps are just simply large in size and you’ll be zooming and scrolling quite often, the visual difference that is lost becomes frustrating.

It’s none-the-less a gorgeous game with strong colors and wonderful art. While traversing the game’s locations, the levels change stylistically and visually representing you getting closer to the heart of the infestation. The world that’s become infested reeks of extraterrestrial and unknown. It’s a visual delight of science fiction. This, combined with the sound of  squishing of bugs as your Marines get in close for melee attacks, and the unending turret gunfire amid rocket launcher explosions is audibly pleasing.

The game’s branching Campaign lasts seventeen levels. The different branches tear away from the story and allow you to do random missions for extra money and other incentives, and are able to be played over and over again. The Weekly Challenge offers bronze, silver, and gold which represent the difficulty, and offer varied challenges to complete for a place on the leaderboard. Skirmish is a no frills way of jumping into the game with complete randomization of map, enemies, weapons, and hoping for the best. 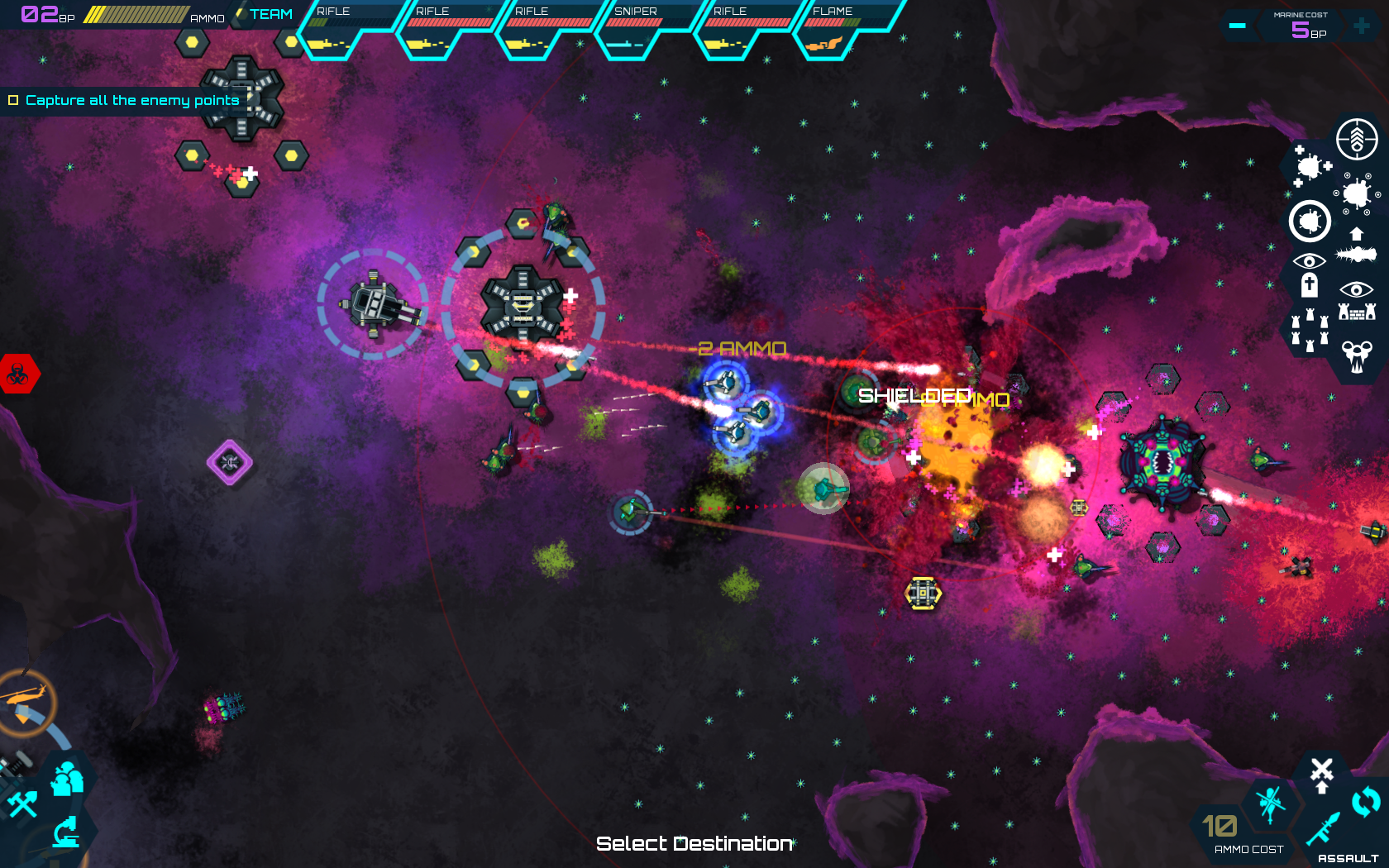 Infested Planet is an infinitely replayable game that offers a lot of depth, mixed with action and strategy. The modest asking price and breadth of content are well-matched. Some oddities in color choices and repetitiveness can be ignored or otherwise overcome, but burden the game in unexpected ways. It’s an absolute blast to play, and has impressive numbers of enemies that fill the screen. Good in short bursts or monster play sessions, is a game that does many things, and most of it really well.