TowerFall Ascension feels like a game ripped from a different time. From the pixelated art, to the sound, and even the 4:3 presentation. There was nothing like this game from the era it represents, but it fills the void in our modern hearts.

TowerFall Ascension is the vastly expanded and heavily updated version of the Ouya hit, TowerFall. The ability to get in and start playing is remarkably fast, and easy to learn. There’s a massive amount of variables to choose from, creating insane combinations that are sure to result in hilarity. Such as the Big Head Mode which paints and even bigger target onto your character, as well as everyone else. Each of the included variants, now totaling 67, enhance or complicate each match.

You’ll start off by choosing one of four playable characters, with the option for four bonus characters to be unlocked through play. Each character is visually different, but are identical to one another in all aspects. All players then gets dropped into an arena of their choosing,  or by randomization. Levels wrap around horizontally and vertically, giving room for many opportunities and mistakes. Mostly mistakes. You’ll move, jump, and shoot as basics to the combat. More experienced players will use the dash to evade and reach higher platforms. Good timing is rewarded by the ability to catch incoming arrows for extra ammo and bragging rights. Random power-ups will appear in the form of chests that can be claimed by any player, which can change the tide of battle. Something as simple as a pair of wings can let you sustain height, but doesn’t make you invulnerable from someone looping around for an unsuspecting head-stomp. Or obtaining the bramble arrow for instance, which upon contact, unleashes an expanding vine of thorns. The best perhaps, is when a wall of lava slowly encloses in the arena until the round is over.

Unpredictable moments can make the basic firing of an arrow more exciting when it is fired towards a lantern, which can ignite it to become a flaming arrow to set your opponent ablaze upon death. Firing arrows simultaneously at one another causes them to cancel each other out. Everything is out to kill you, from your friends, to the power-ups, and even the levels themselves where platforms disappear or smash violently into nearby walls. The final kill allows you to relive your glory or utter failure thanks to the instant replay, which can be used ad infinitum and even slowed down to pour salt onto the freshly opened wound.

Versus mode requires a minimum of two players, and up to four to play. The more archers, the faster and more frantic the game gets, and the louder everyone becomes. Each round can go incredibly fast due to impatience, or be a seemingly never-ending stalemate as you dodge and shoot frantically in desperate attempts to be the victor. At the end of a match, awards are earned for how one plays. Some of them can be truly praising, others are humiliating. Versus comes in a few flavors: Headhunters, Team Deathmatch, and Last Man Standing, but now with 120 arenas to play on, this provides a unique experience every time.

The big addition here is Quest mode, which serves as the game’s closest form of singleplayer or co-op mode. You alone, or with a friend can play through the game’s levels linearly by facing waves of opponents appearing from portals. The first couple of waves are pretty easy to dispatch, but quickly becomes challenging and good practice for the competitive aspect.

As with the original release, there’s also the Trials. These are time trials for you to take out hanging practice archery dolls of hay as fast as possible, and are rewarded for getting below par time. This develops a mild form of OCD to go back and play them again and again to improve time and be awarded the next medal before actually just moving on. 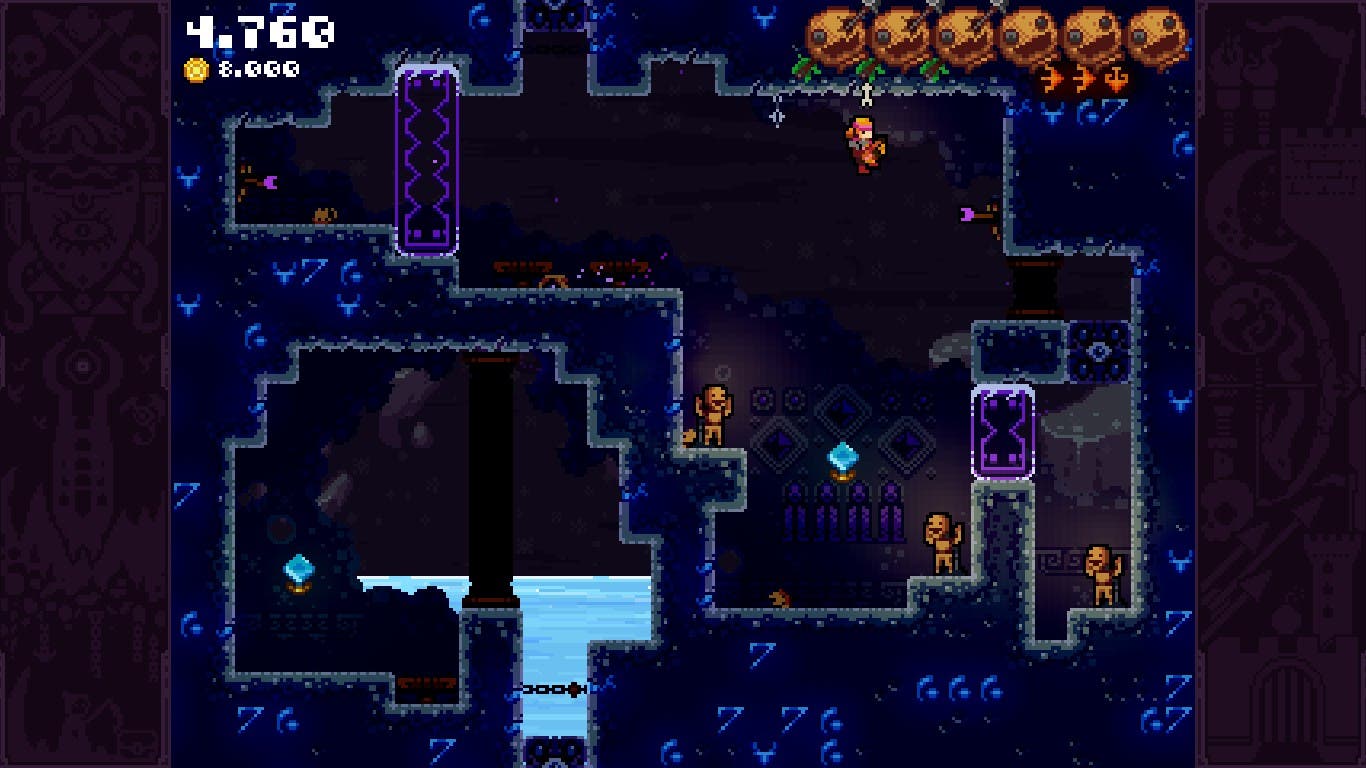 A clever use of the DualShock 4’s lightbar is to match the player up with the color of their chosen character. When you take damage it blinks feverishly. But of course, the overall effect is only accentuated in darkness. Other neat effects is using the speaker on the controller that emits sound effects on particular actions. The touchpad doesn’t have any actions, but I don’t see where it would be useful.

This may come as a shock to many, but there’s no online multiplayer to be had on any of the platforms this game appears on. And this is okay. I can’t imagine even the smallest amount of lag to be remotely enjoyable for anyone. As such, this is explicitly a local couch game that’s insanely fun.

Regarding updates to the Ouya version, Matt Thorson has this to say about it:
“Ouya will also see Ascension as a free update, 3 months after launch elsewhere.”

It’s a bold move to release a game in 2014 without online multiplayer and a proper singleplayer campaign. But that isn’t what makes this game fun or exciting. It’s about the personal and intimate relationships that are bonded and broken within a few minutes. If you have friends or family that can play this regularly, it’s definitely worth the purchase and will provide anecdotes of “that one time” to relive again and again. However, if you’re intention is to play this solo, you’re won’t get the full enjoyment of what TowerFall Ascension has to offer.