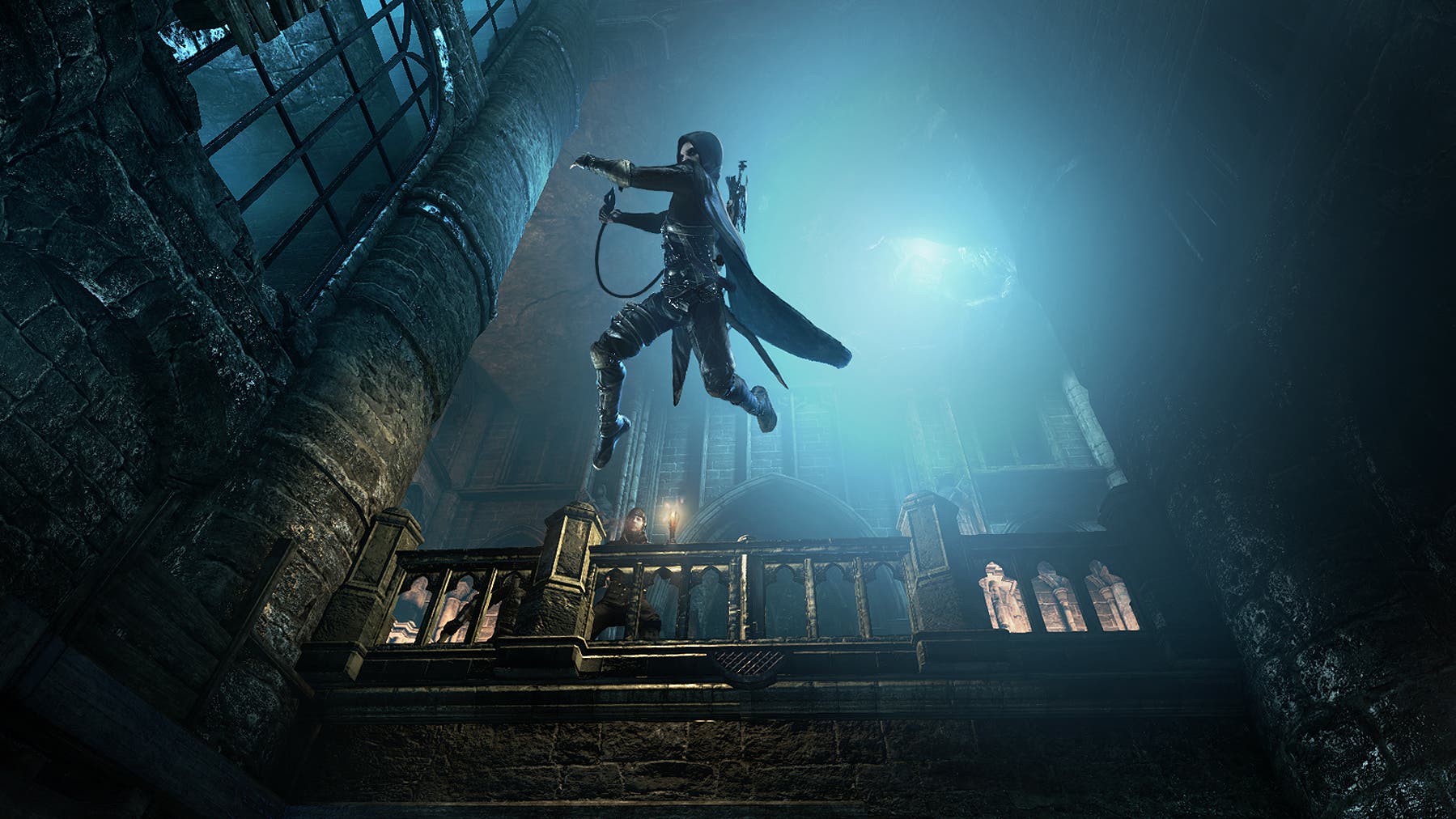 Being a thief, a good one anyway, requires a great amount of skill. They must use stealth, generally combined with a lack of violence to steal items, and disappear unnoticed. And following these guidelines while playing THIEF is where you get the most enjoyment. Straying from this format does not penalize you or stop you from progressing, but instead makes for clumsy combat and unyielding frustration in which you revert to the last save point to undo what went wrong. This is the trial-and-error gameplay you’d come to expect in a stealth game, and from THIEF, but isn’t as much fun as it is a slog. 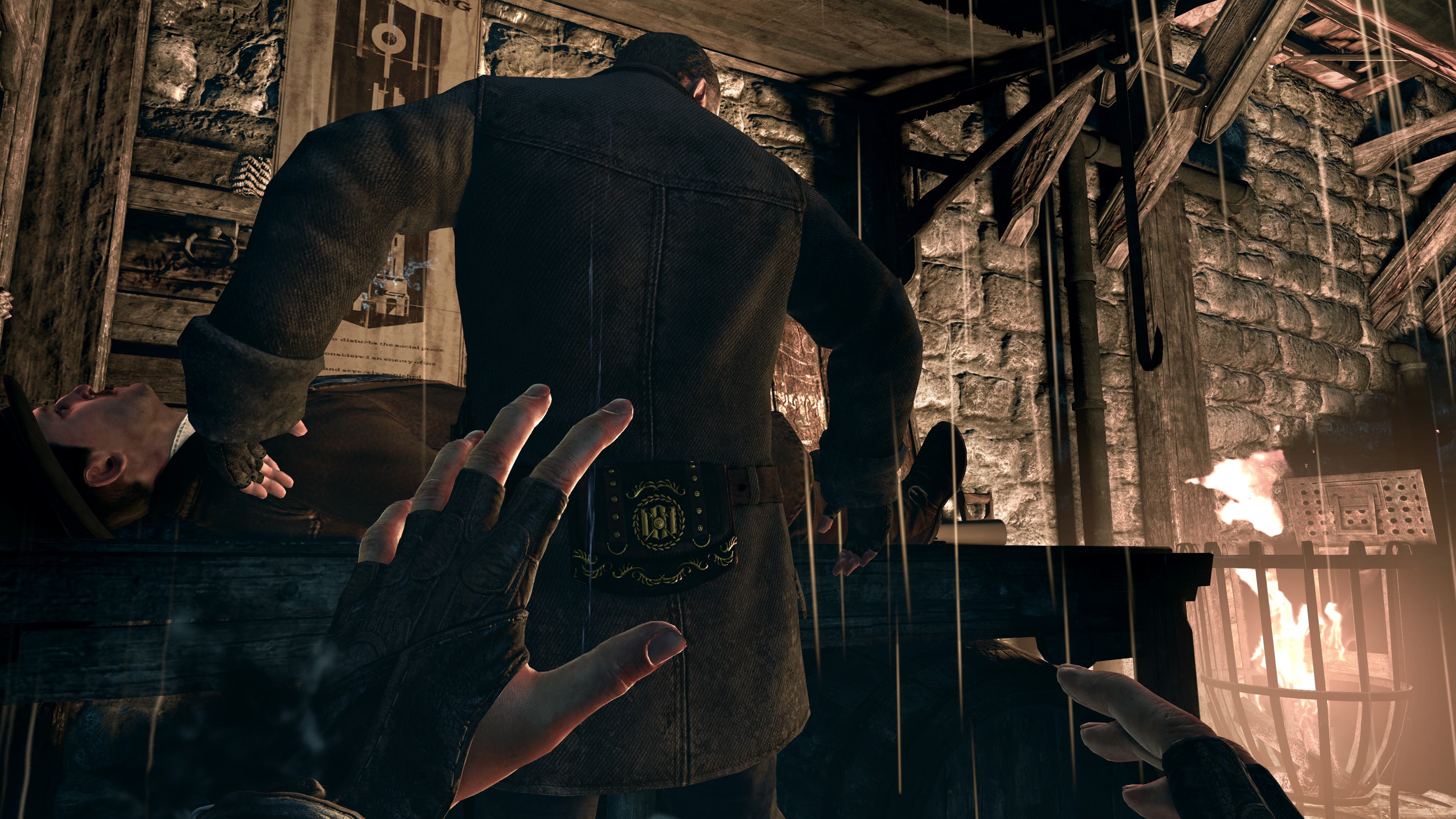 Serving as a reboot akin to the recent Tomb Raider release, THIEF places you into the light-stepping shoes of Garrett, the renowned or self-proclaimed “world’s greatest thief”. He is working with a naive, juvenile, and brash apprentice named Erin. While on a mission to retrieve an artifact, things naturally go awry. In a moment of weakness, it is she who gets Garrett to lower his guard, and in this haste, puts them in harm’s way. Something catastrophic happens that puts Garrett into a year-long coma.

Awakened by forces unknown, you are thrown back into the now-quarantined city. This forces upon you to figure out what The Gloom is and how to stop The Baron while taking refuge in The City. Why Garrett, a thief of all people is entrusted to complete this task and return The City to its former glory is unknown. It all seems, well, above his abilities and people’s expectations. But this is exactly what The City needs, an anti-hero. 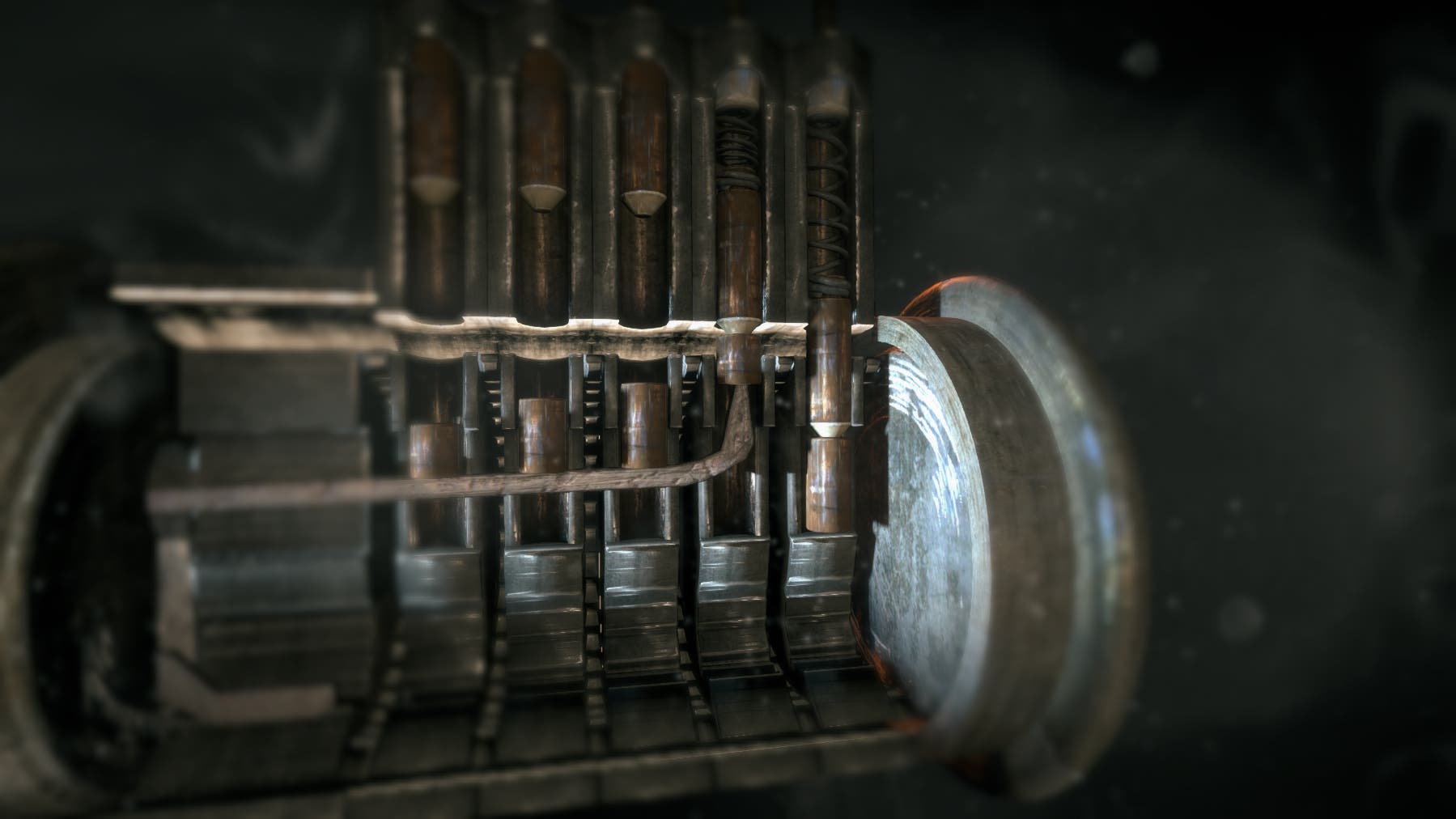 Garrett has many tools at his disposal: wrench, wire-cutters, bow and arrow, and even his trusty blackjack. It’s a shame that every weapon is contextual in use. Want to use the wrench? Press a button and watch Garrett do it. Want to take out a guard using the blackjack? Press a button and watch Garrett do it. You are removed from being in direct control of the action in front of you, in moments where you want to be. Rope arrows allow you to climb to new heights, but are only available at specific points to be used left by the developers. Fire arrows can only set guards ablaze once it hits flammable liquid on the ground, and never when directly aimed at them. This disconnect does not make me feel like a thief in any meaningful way.

Early on, Garrett acquires a tool that he spent so much time debating its practicality, suggesting it makes things “too easy”, only to end up using it himself in most of the game. It’s hypocrisy at it’s finest, but strange that Garrett would sway so quickly on it. That said, it’s a pretty damn useful tool and makes traversal the only way possible by using it. 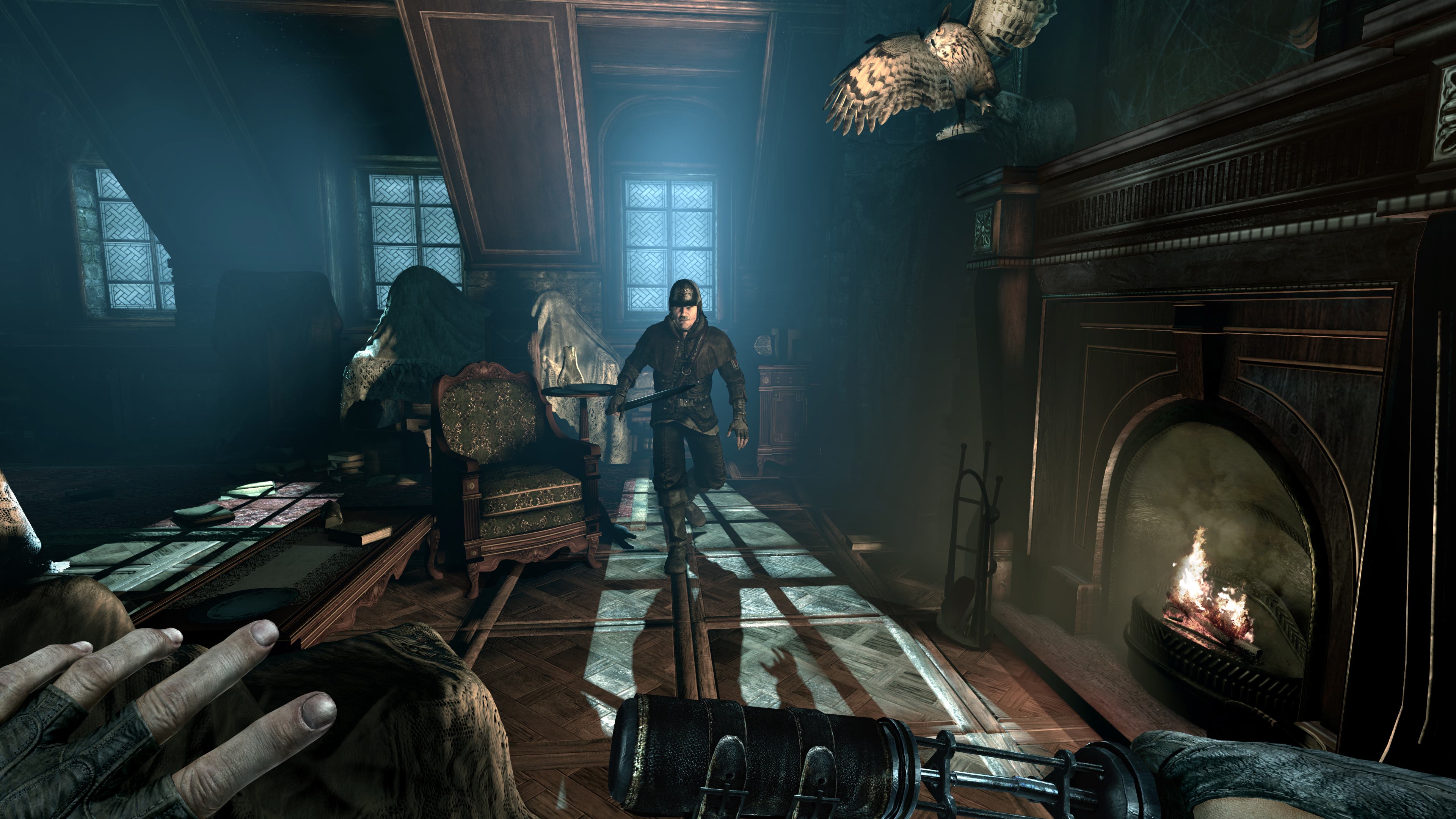 Focus is the new, optional, ability that allows Garrett to perceive with great clarity, improve lock-picking, or perform better in combat. It burns up like a flame when used and can be turned off at will. Recharging it requires picking up poppy flowers or purchasing them at traders. Focus can be upgraded provided you have crystals to do so. You then invest it into different areas that will be improved when in use.

It’s a very divisive mechanic that’s brought discord to the hardcore fans of the series. This is why I stress that is optional. It’s helpful for those who may struggle or get stuck. I ended up starting a separate game where I have it turned off permanently via the custom difficulty. So, you too can play as if it never existed, and not hinder your experience. 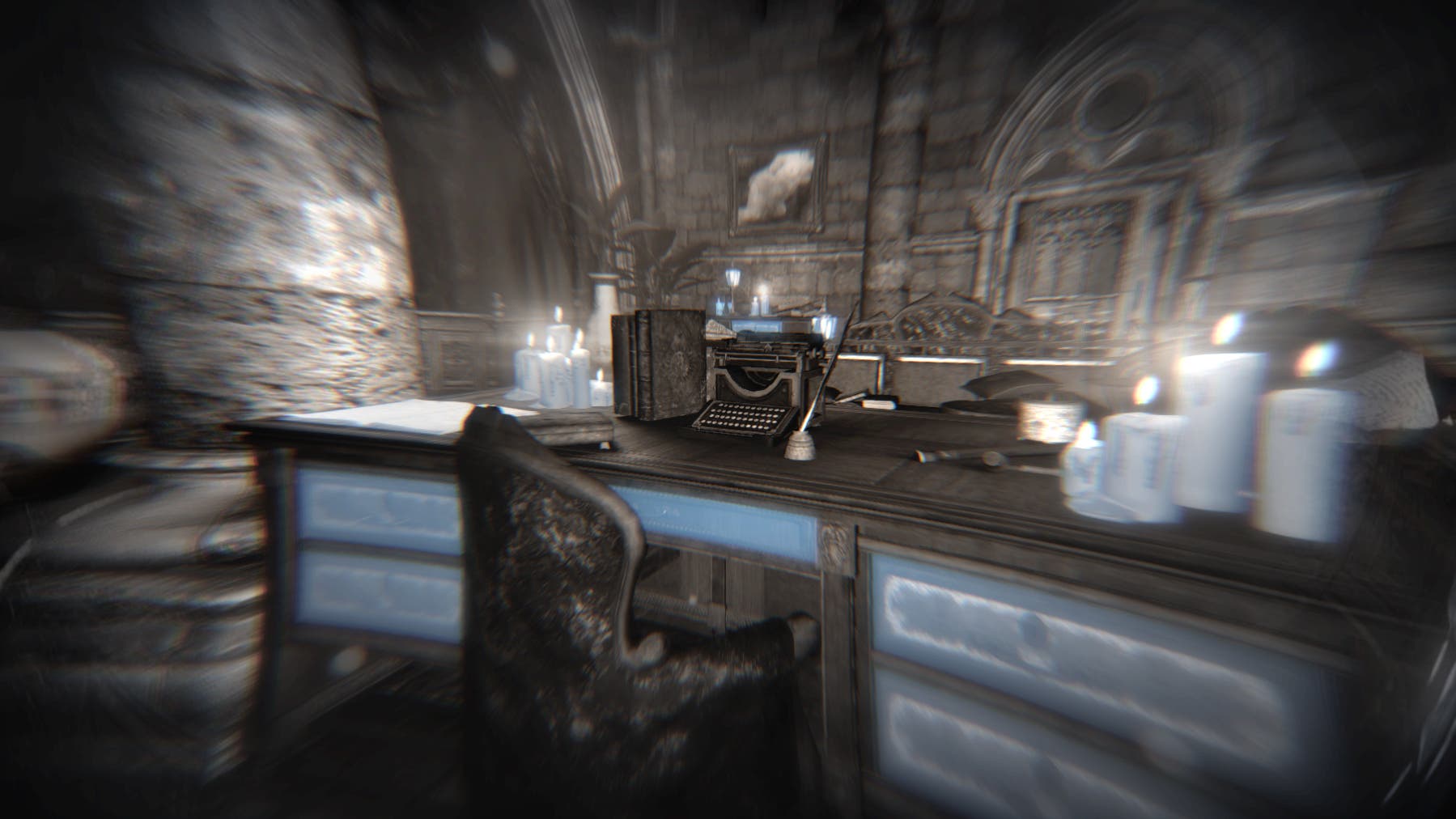 The game sure has quirks and oddities that really interfere with enjoying everything properly: The AI is erratic and unpredictable in unwelcome ways. For instance, being in complete shadow gets you noticed while standing in blinding light and you get ignored. It doesn’t always follow that rule, which is confusing and you never know when you’ll be unnecessarily detected. Replaying a mission requires walking Garrett through the sectioned city (separated by load screens) to retry a mission rather than selecting it from a menu. Security in The City lacks variety. Nearly everyone has a wall safe hidden behind a button-release painting, a combination written down, or a peephole to learn secrets. Loose lips.

What THIEF gets right, is few but exactly what makes the game great. The fear that you experience when lock-picking is tense. You’re vision is locked to looking at what you’re doing, and can’t see where the guard that’s patrolling the area is. Or when you jump up into the rafters and stalk from the upper shadows and just observe. Peeping through keyholes or walls allow for some interesting information to gather, or survey a room without accidentally barging in on something and being caught. Seeing a glimmering item to steal off in the distance only encourages, even begs you to steal it, no matter the risk. It’s all so exciting to pull off that perfect heist without disturbing even a hair. 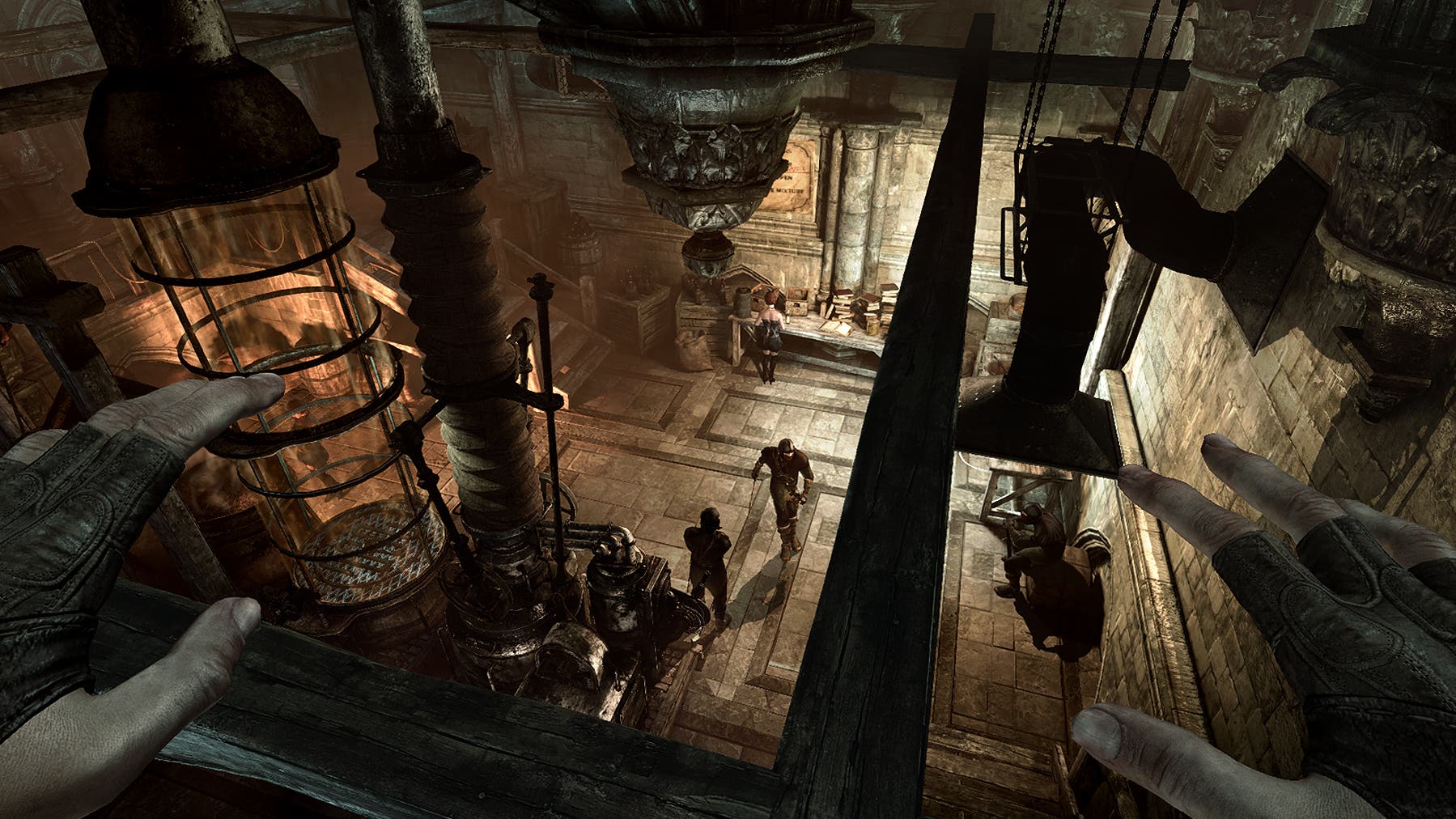 Most of the time, THIEF looks good. The night sky is filled with stars and the streets are dimly lit by open flames. Main streets are illuminated by electricity, all of it casting harsh shadows around. Each area is almost always dark and gloomy, feeling absolutely appropriate. When up close though, it loses the charm. Normally this wouldn’t be so bad, but often you’re brushed up against objects for peeking and looking for hidden switches. Reviewing the game on PC, at max settings, I still found low-res textures and terrible looking faces that only a mother could love. Having been developed simultaneously on last-gen systems hurts the overall visuals.

Sound design is great, hearing ambient dialogue, Garrett’s light steps matching his pace, and completely muffled when using the walk modifier to go slowly. It’s a terrifying sound to incapacitate a guard with your blackjack, also highly enjoyable to hear again and again. Some audio syncing arises during cutscenes. The music is well orchestrated and fitting to the era, but is often drowning out dialogue in cutscenes. This seems to be the only flaw, is cutscene audio, but the rest is moody and atmospheric. 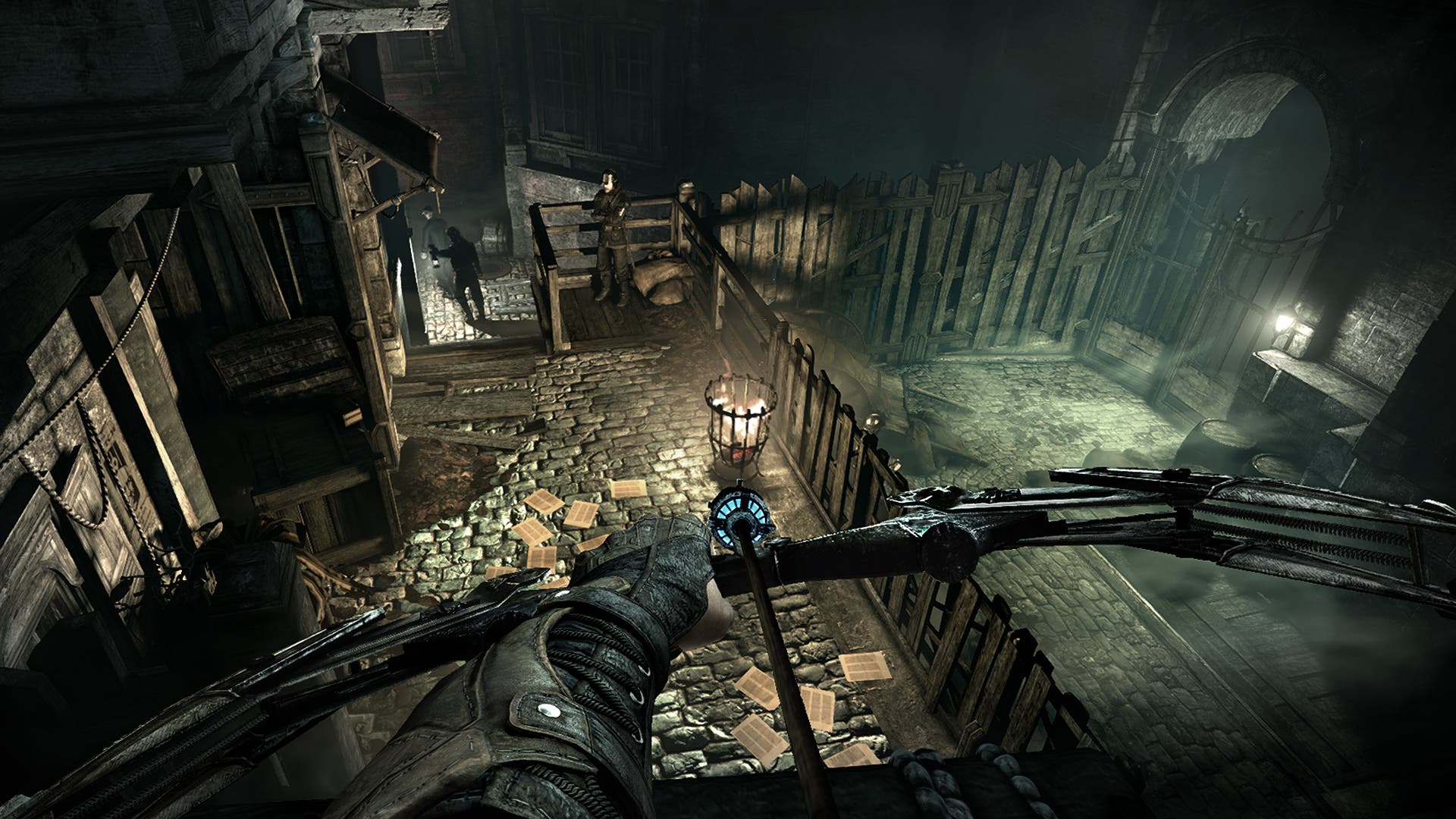 THIEF manages to straddle the fence at every chance it gets, unwilling to take risks and leave it’s comfort zone of tried and true mechanics of a generation gone by. There are numerous odd choices in character motivation, design constraints, and an overabundant use of loading screens – even on “Next Gen” systems. The game is still enjoyable on a fundamental level. With main and side quests to accomplish and retry, can still fulfill the need to release your inner-kleptomaniac and steal everything in sight, all while feeling like a stealthy badass, as you come out unscathed. Everything is handed to the player on a silver platter disguised as choice. Perhaps it’s time to retire this thief.

A Steam code was provided by GreenManGaming for review purposes