Exploring an unknown world can be incredibly exciting and fantastic. The world of Vertiel in Bound By Flame is no different. Except that the developer by the name of Spiders, only wants you to only get a glimpse of what the world has to offer. You’ll traverse in tight corridors and walkways that would make a contortionist feel cramped. This is only the tip of the iceberg of Bound By Flame‘s problems systemically. It’s an RPG that means well, but falls short in every aspect described as a feature. 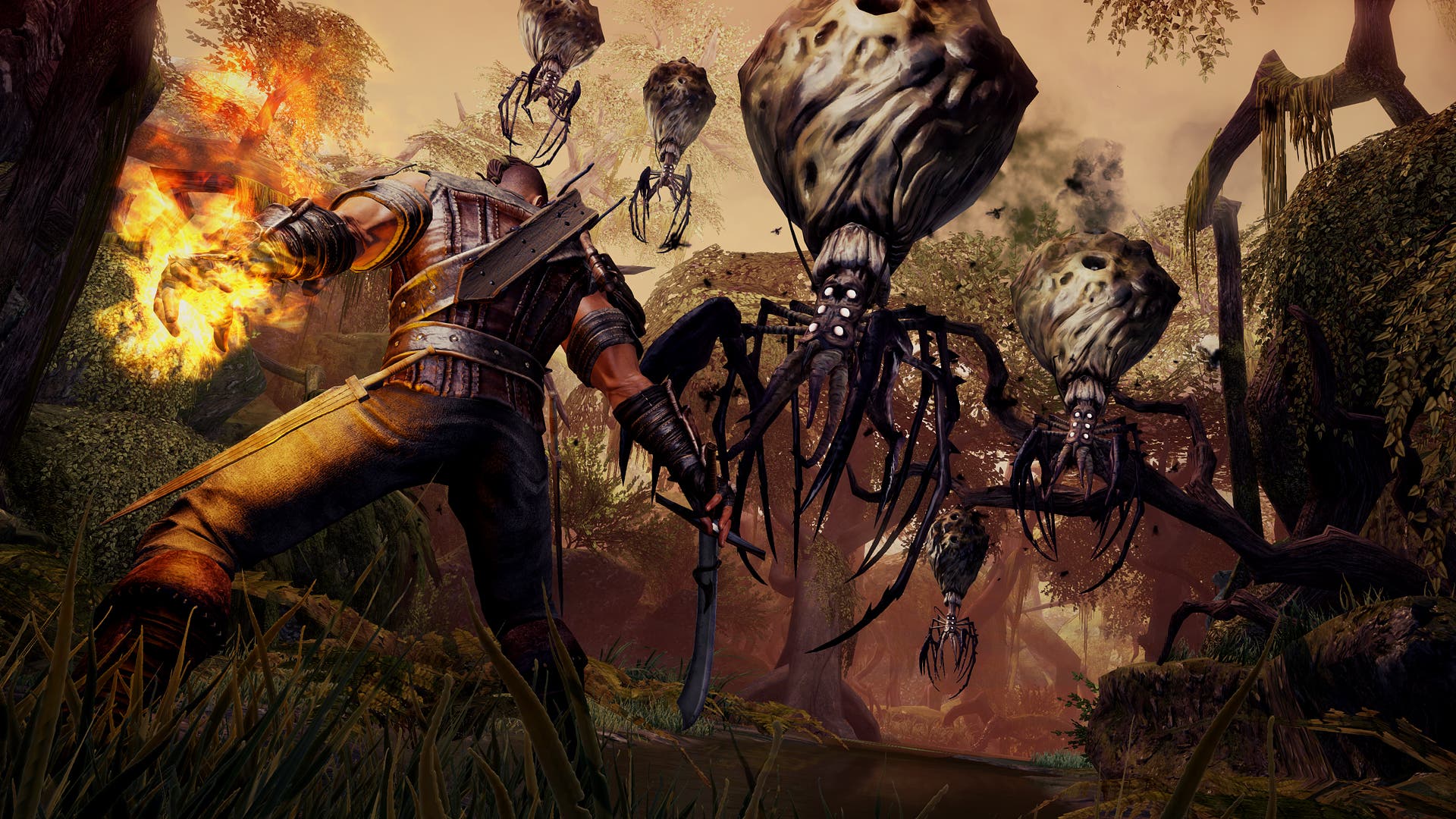 Vertiel is being threatened by the ominous return of the seven Ice Lords, and summon the deadwalkers to rip the world apart. Between you, a part of the Pure-Blades working with the Red Scribes, another faction who uses magic. They must cast a powerful spell that will stop this, but fail. You quite literally get caught up in it as you accidentally fall into the portal, and take on a flame demon within your body. As a bonus, you also are imbued with new powers of pyromancy. As a downside, he’s quite chatty, and will often give his input on certain situations, allowing you to succumb to his will.

The story contained within Bound By Flame is deliberately linear, but allows for deviations in the form of side quests to complete. But nothing is ever fantastically rewarding. The sidequests will have you revisiting the same locations as you’ll find in the main questline, showing the extreme lack of explorable areas to uncover. Each of the three acts in the game have a new hub town that can be visited to talk with allies, trade, and further the story. As a result of the game’s linearity, any previous towns visited cannot be returned to, so you’ll have to wrap up all side activities before moving on for risk of failing those objectives. A pure main story run may take only 8-10 hours depending on difficulty, and up to 15 hours with all sidequests completed. Short for an RPG, but with so many choices, there are reasons to go back for other playthroughs. 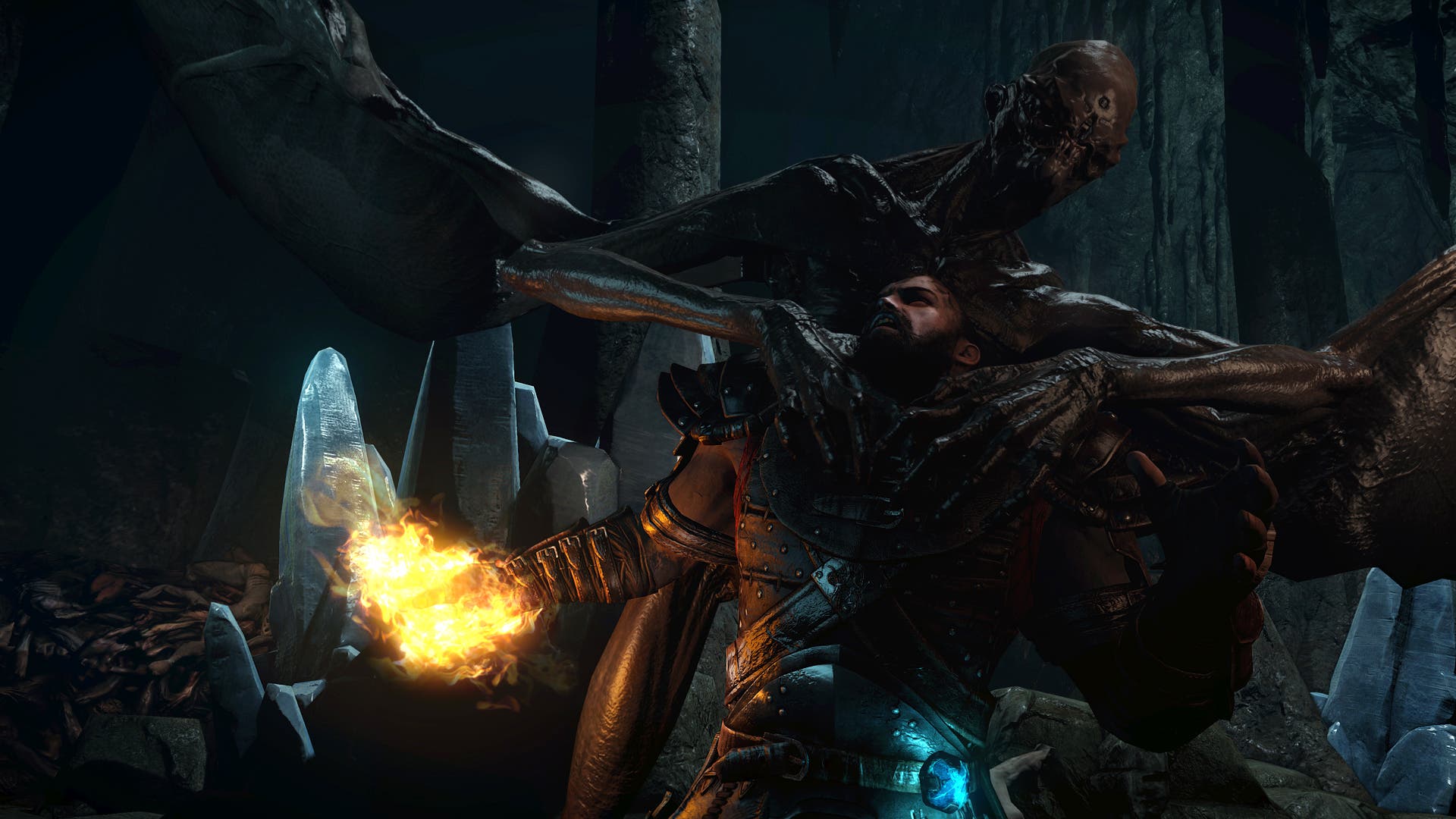 As any good action RPG should have, is character customization. While not very robust, is satisfying in achieving the right type of look and feel for your female or male character. By default, your name is Vulcan. Vulcan is a dumb name. You can choose to rename yourself. However, that is soon forgotten, every person you encounter in cutscenes will just call you Vulcan anyway, diminishing that aspect of customization.

Spiders seems to have been influenced by RPGs of recent past, and combined them together with loose resemblances. Most notably Dragon Age: Origins for dialogue and companion interactions, and The Witcher 2 for the combat. While this is applaudable, they don’t do any of it well enough to be anything interesting or significant when played out. 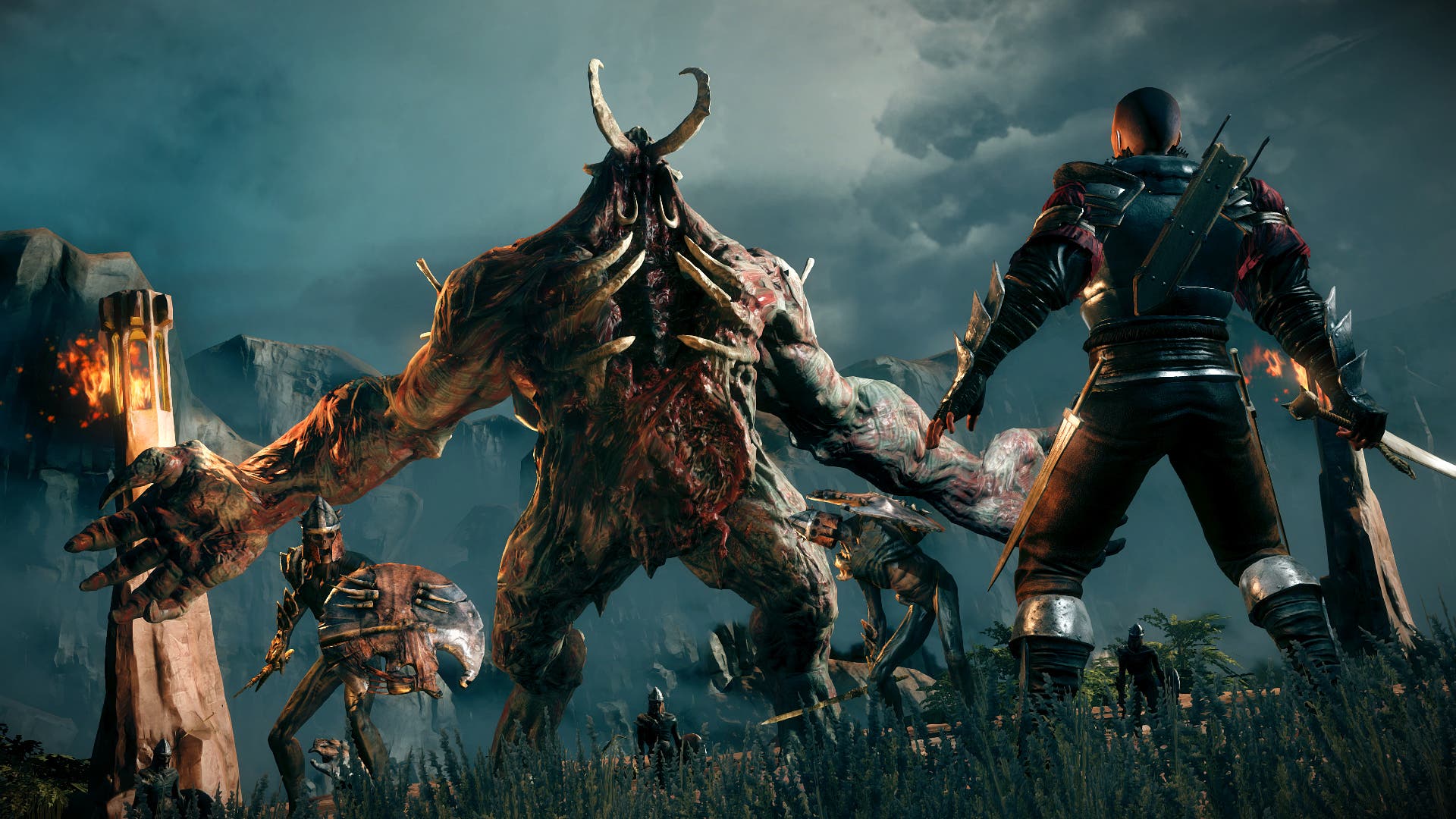 Conversing with anyone is a mess. Dialogue tonally shifts from humorous to serious within the same conversation. It is very uneven when there is something cataclysmic happening in the world, but yet someone wants to crack inappropriate jokes for levity? Though, I have to admit that when it was funny, got me to chuckle more than a few times. Some characters like to swear “shit”, and others like to substitute that with “shite” – this inconsistency does give the characters around you some subtle differences that I could appreciate.

Choice is in overabundance here. You’ll constantly be tasked with breaking the tie between two different things at any one time. Spiders does not play it safe with its characters. Life or death can reach a character by the decisions you make just in chat alone can maintain alliances or forge rivalries that won’t have repercussions until later in the game. Should you side with your inner demon, you’ll take on a demonic appearance to show how evil you really are. 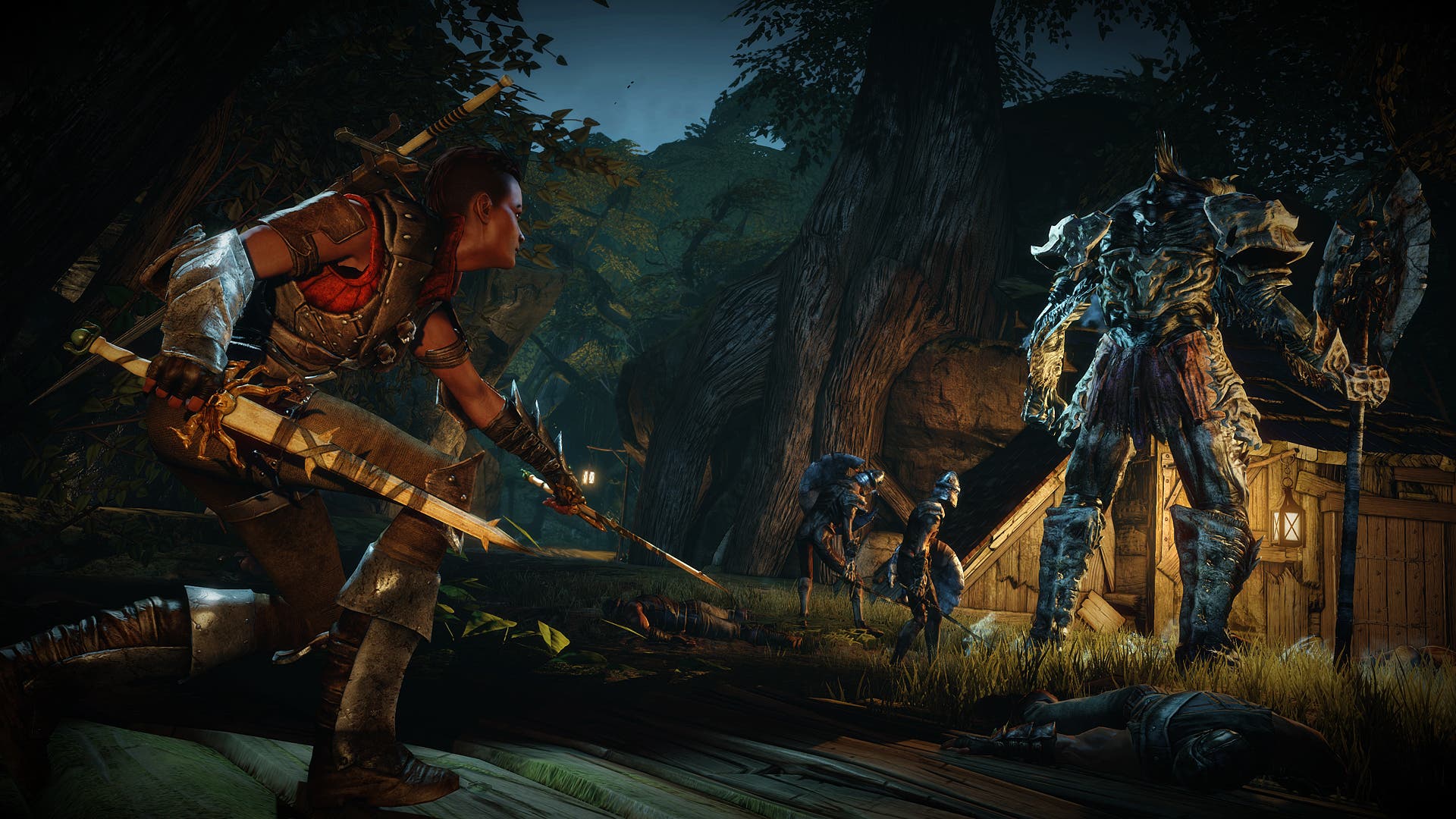 Bound By Flame does not rely on the usual class-based system. Your Vulcan is versed in two fighting styles, or stances: The Warrior, who wields a two-handed sword who can stun with a hearty kick, and the Ranger who equips a pair of daggers for quick strikes and can dodge with great agility. Rather than be shoehorned into a specific class or fighting style, this allows for you to switch at any moment to accommodate the situation and enemy before you. Also in your repertoire, is the ability to lay down traps and shoot a crossbow which are stance-neutral and can be used at any time. Switching from Warrior to Ranger while throwing fireballs as a Pyromancer is fast and smooth. Having this versatility negates the need to start a new game to experience a different class.

Engaging in combat with enemies is tactical, in that you must think about who you’re facing off against. Most strategies involve making one or two hits and then back off for the return attack. There’s something off about attacks, they don’t always seem to land when watching the animation in motion. Oddly enough, some hits from the enemy cannot be blocked or parried and often result in a knockdown. This is somewhat acceptable for standard enemies, but on the second boss encounter, this becomes frustrating beyond concern. Upon being knocked down, you will be mercilessly attacked with no way of defending yourself from this onslaught. Even upon your standing up animation, the attacks can continue until death. Often I had to “cheese” boss encounters by running in circles to give myself respite, and so that my health regenerated to full. I eventually had to lower the difficulty to easy to progress. Most battles and boss fights beyond this were manageable until the final boss fight, which is an enraging mess yet again. And not in any way challenging.

As you kill things, complete quests, and have conversations you will accrue XP points that can be spent into the three skill trees. There is a tree for each area of combat: warrior, ranger, and pyromancy. How you choose to spend these points are up to you. As you progress into higher tiers, certain requirements must be met. But to attain them may require investing in skills or perks that you weren’t willing to originally invest in, making them feel wasted. You can also spend points in feats that will allow you craft items using less resources or acquire more health – as it is not awarded simply by leveling, to name a couple.

Vulcan’s inner teenager will record everything into his diary, or more commonly known as a codex. Allowing you to learn about the monsters you’ve faced and characters you’ve interacted and get simple text on what has transpired thus far. 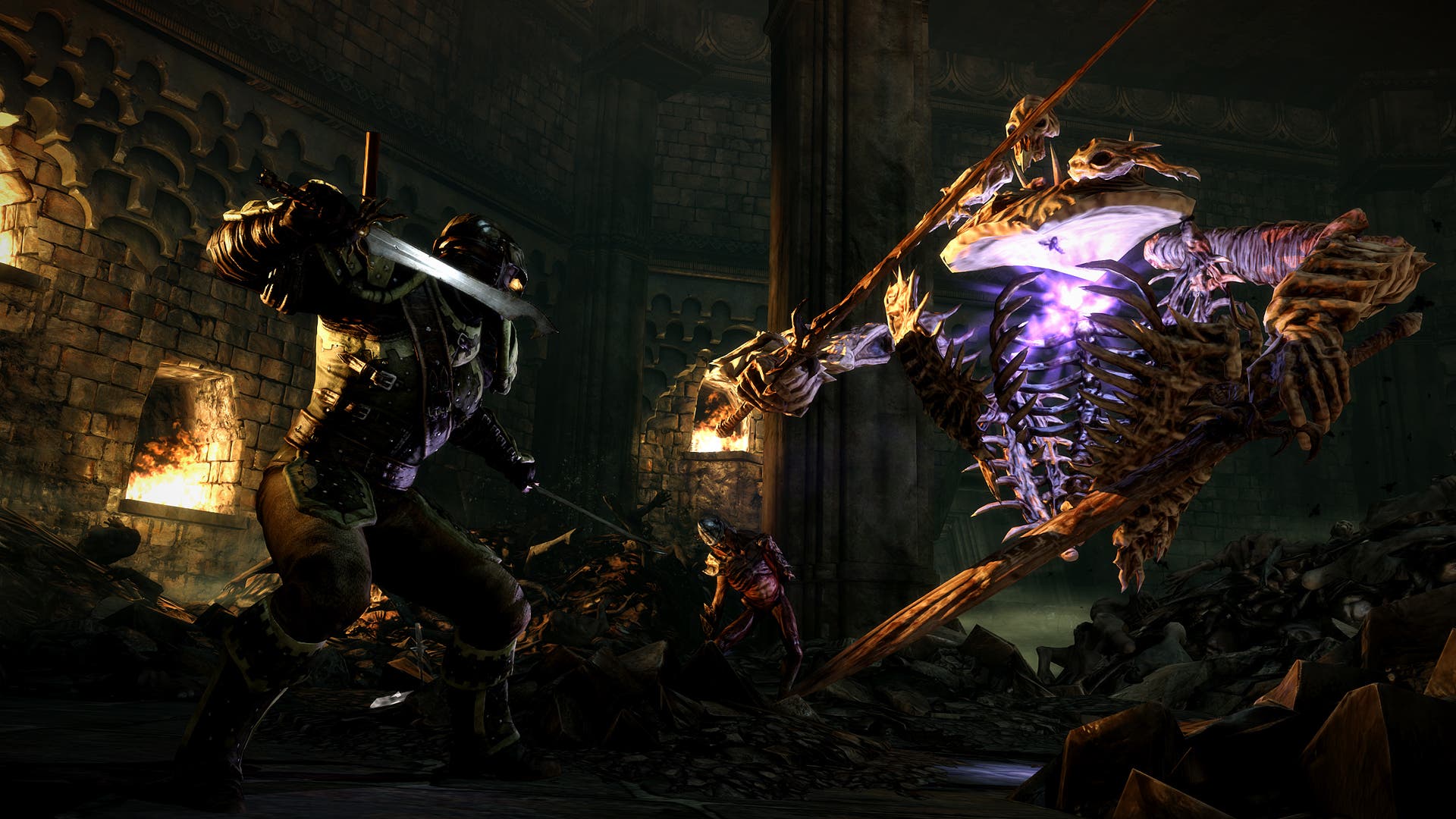 You don’t have to play alone, the game will allow for you to have NPC companions join you along the way, some can be love interests or mortal enemies by the end of the game. Each character who can join you is unique and serves a different purpose when engaged in combat. You can issue orders to them to change their behavior, or beforehand have a discussion with what you’d like them to do in a fight. Whether you tell them to be defensive of their own mortality or not, they go down quickly in combat and become useless as they cannot be revived.

Items can be crafted at any time, on the road questing or even mid-combat. Don’t like how your weapon is performing? Pause the game and craft the weapon you need to have. You can modify the pommel, hilt, and blade to have different properties such as health regeneration, resistance to poison, and dealing extra damage. Crafting ultimately devalues the need for a trader when you are in town.

The game looks great for being on DirectX 9, but some colors come off flat or muted. Enemy designs often repeat after they’ve all been introduced, and tedium sets in with how to deal with them.

Having played the PS4 and PC version, the only two “next-gen” versions of the game, the PC version is still the clear winner. The PS4 is not far behind. The only flaws experienced while playing were in the framerate. While seemingly above 30fps, fluxuated between 30-60fps depending on what was going on-screen. Not a large complaint, but something to consider.

I am glad Spiders worked hard to make the UI and menu system easy to navigate, and really clean to look at. Never was I confused looking at the map or interacting with any elements. 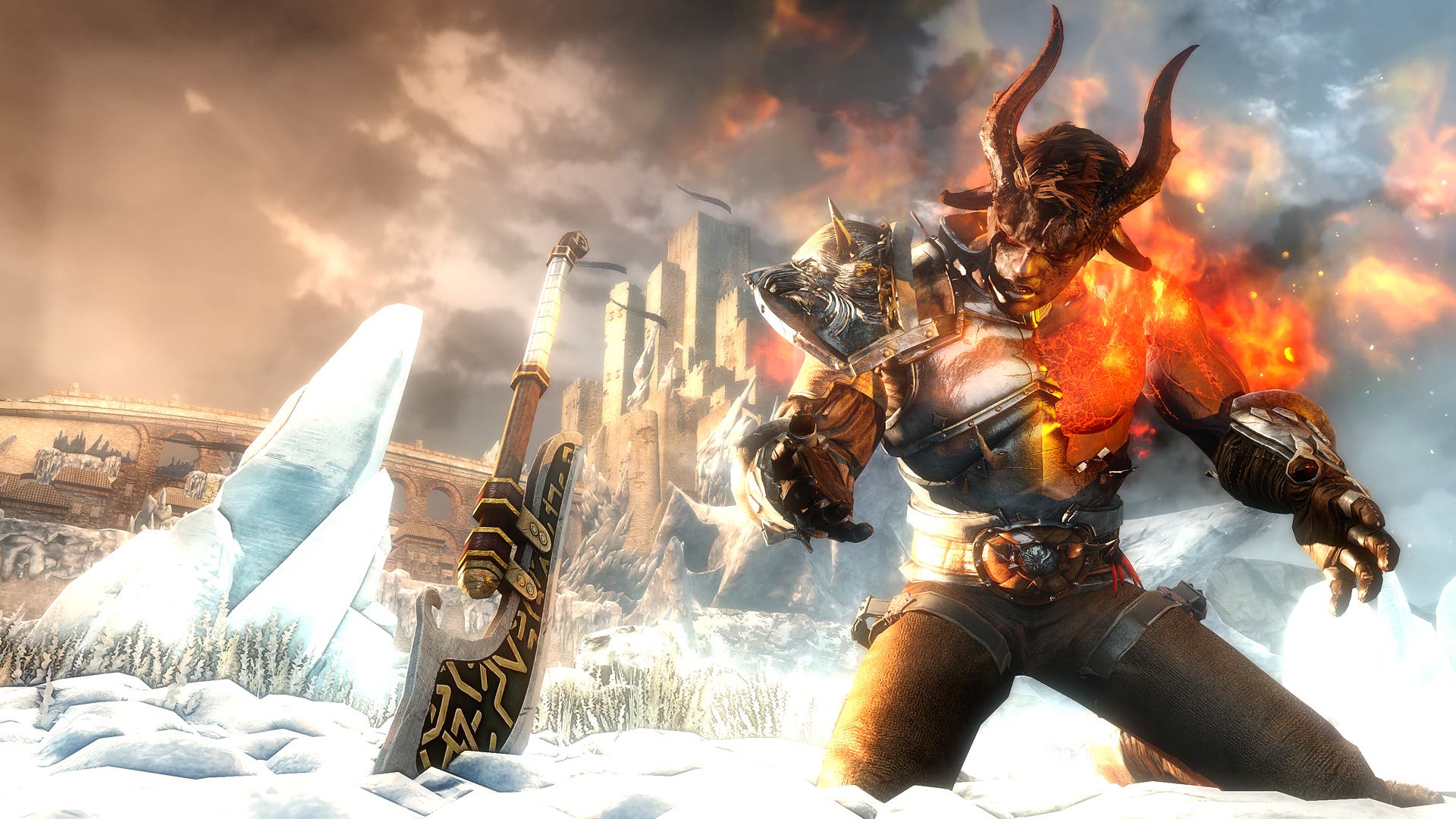 Bound By Flame is an average RPG held back by budgets and serious design flaws outweighed by its ambition. With the ability to save anywhere, change your fighting style on-the-fly, and craft at any time, Bound By Flame does a lot of little things right while getting all the big things wrong. Difficulty is unbalanced and unfair. Combat is ruined by player animations that can be interrupted resulting in quick deaths and having to load your last save. That’s an egregious mistake in the design process to allow such a thing. At first, I enjoyed my time with the game. By the game’s end, I was happy that it was over, as in that I didn’t have to play it anymore.