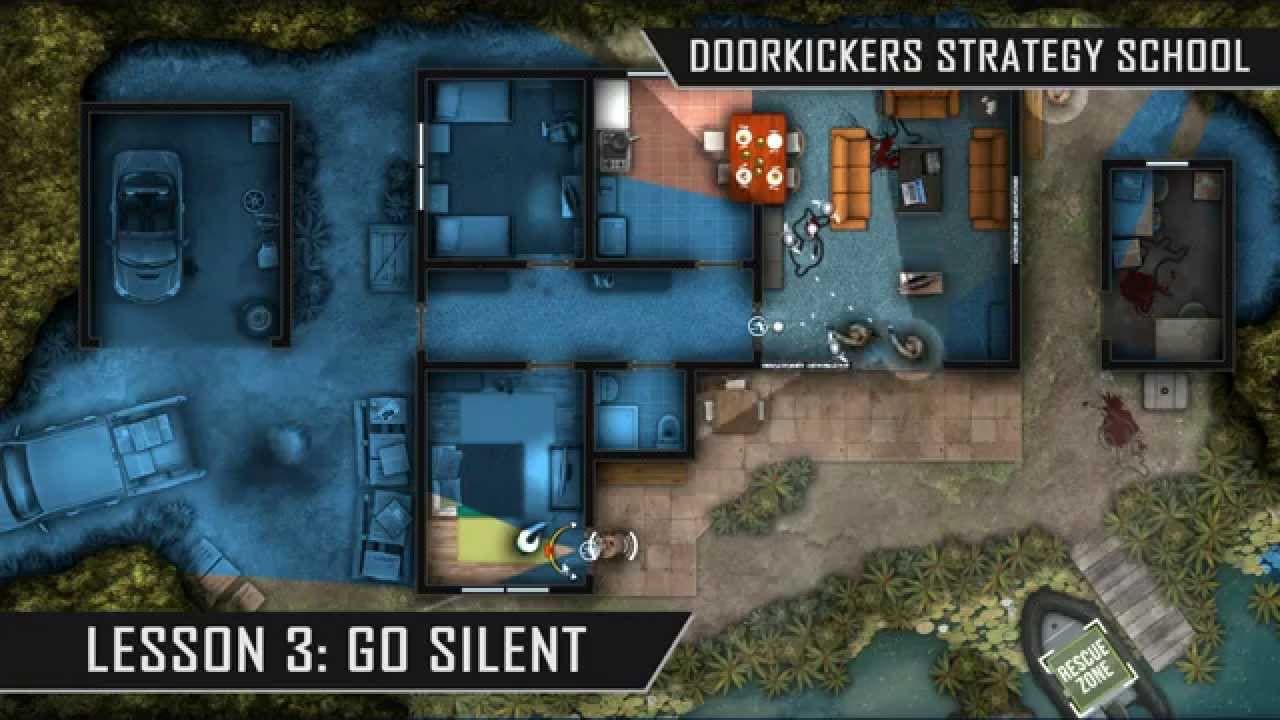 Door Kickers goes into Beta, evidenced by this Trailer

Starting with the new menu makeup, going through the changed equipment unlocking and Squad Levelup, and getting to the improved tactical options in game, we feel its a much better experience.

Yes, we did say Squad Levelup. Back when we first put the Doctrine Tree out we knew some things didn’t really click together, and your feedback confirmed we’re on the same page. The new system works as follows:

Speaking of your troopers, you can now quasi-customize them by replacing them with others from the available pool. In the future, you will also be able to completely edit the names and use your custom pictures! Going into the actual game, you might notice the troopers are much better at following the path and orders sequence and its much easier to predict now what you will see from each waypoint.

You can also have waypoints that interact with objects from a distance, so if you want for example to have a trooper open the door from the side, that’s easy to plan in advance now.

Also, a new and handy auto-go-code is available now, the wait for clear order. Troopers ordered to do so will stay in place until all hostiles have been pacified or left their field of view, and continue afterwards. Its a handy tool, but it will put a half a second delay in your advance, so use it where appropriate only.

Since the game plays a little different, we’re especially keen to hear your thoughts on the new build and features, so don’t forget to write!

– Challenges: in addition to the 3-star system, you can now complete challenges for each level. These do not count towards unlocking weapons but do gain your troopers XP.
– Plan saving: all paths up to the first “Play” command are saved and restored when restarting the map, also called the Daimaju feature (https://www.youtube.com/watch?v=X5P849j6q5c).
– Unlockable items: items are now unlocked using the Stars currency.
– Unlockable classes: trooper classes (assaulter/breacher/etc.) are now unlocked by leveling up your squad.
– 8 new firearms.
– 3 new armor types.
– 8 new maps.
– Many improvements to enemy AI.
– Line of sight preview when drawing a path.
– Proper feedback indicators for enemies that are about to execute a hostage + added countdown timers for executioners.
– Feedback for the range of all sounds. Can be switched off in options.
– Added indicators for shield area of cover.
– Added enemy tooltips that show their equipment and intentions.
– When the line of fire is blocked by a friendly unit, a proper graphical indicator is rendered.
– The VIPs in “Protect the VIP” scenarios must be activated by proximity in order to be able to control them.
– Can customize the name/appearance of your troopers (wip, for now you can only loop through all the troopers in the database).
– Can now change resolution from the in-game video options.
– Support for more .wav formats. Previously an unknown format would crash the game.
– Added reverb sound effects (wip).
– Added new graphics/sounds effects (ejecting bullet shells, rain, fire etc.).
– Graphical updates to many maps, including the training ones.
– Improved overall graphics.
– Can now disable map zooming/panning from the options menu.
– Arrested enemies auto-move outside the line of fire between a swat and a fellow enemy.
– Selecting between paths that are over-imposed is now much easier.
– It is now possible to switch between pages in the Single Mission selection screen, via the small buttons on the bottom.

– Fixed the 50 mods limit downloaded from Steam.
– The “Export replay to movie” feature now works correctly on more (all?) hardware configurations (and faster).
– A crash that would sometimes happen after enabling/disabling mods and playing a game.
– Mods are no longer deleted after starting the game in offline mode.
– Deploy slots no longer look weird on very large screen resolutions.
– Flashbangs that could sometimes kill an enemy if they hit him.
– Too many trooper radio sounds in replays.
– A bug where shields would not stop bullets coming from grazing angles.
– Snipers can no longer target VIPs.
– A bug where modded weapons would show up more than one time in the equipment menu.

– When updating a mod, the mod.xml “description” field is no longer updated on Steam Workshop.
– Can now use additional breaching charge types on a door.
– Maximum map size is no longer hardcoded at 4096×4096, though it’s still limited by the maximum texture size supported by the GPU. Recommended 8192×8192.
– Added more rendering layers (can now control which item renders on top of what item with more precision).
– All weapon mods that use bullet_trace.tga + bullet_trace_shotgun.tga should now use the .dds versions. Will remove the .tga ones in the next update.
– All weapon mods should update the firearms flare rendering layers to mimic the ones in the new equipment.xml version.
– All weapon mods should add bullet-shell-on-the-ground sounds like in equipment.xml. If your mod already added such sounds (e.g. SiC), make sure to take them out or add them using the new fields in equipment.xml.
– Graphics / Explosion sounds for flashbangs/breaching charges are now moddable. Mods that modify the flashbangs/breaching charges should modify them according to the new equipment.xml (added the explosion sounds and graphics).
– Crowbar/lock-picks added to the equipment items and can now be modded.