A Gold Edition of Lara Croft and the Temple of Osiris, which features multiple exclusive items including a 3″ Lara figurine, an artbook filled with never-before-seen concept art, a folding map of the Overworld, and the Season Pass, will be available at participating North American retailers for Xbox One, PlayStation 4 system, and Windows PC. 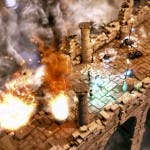 The Lara Croft and the Temple of Osiris Season Pass is available for purchase and includes all future downloadable content including the Icy Death and Twisted Gears Packs. The upcoming DLC Packs offer 6 additional costumes and will challenge Lara, Carter, Horus and Isis to conquer additional tombs and collect a treasure trove of unique rings, amulets and weapons.  The Season Pass does not include the pre-order packs.