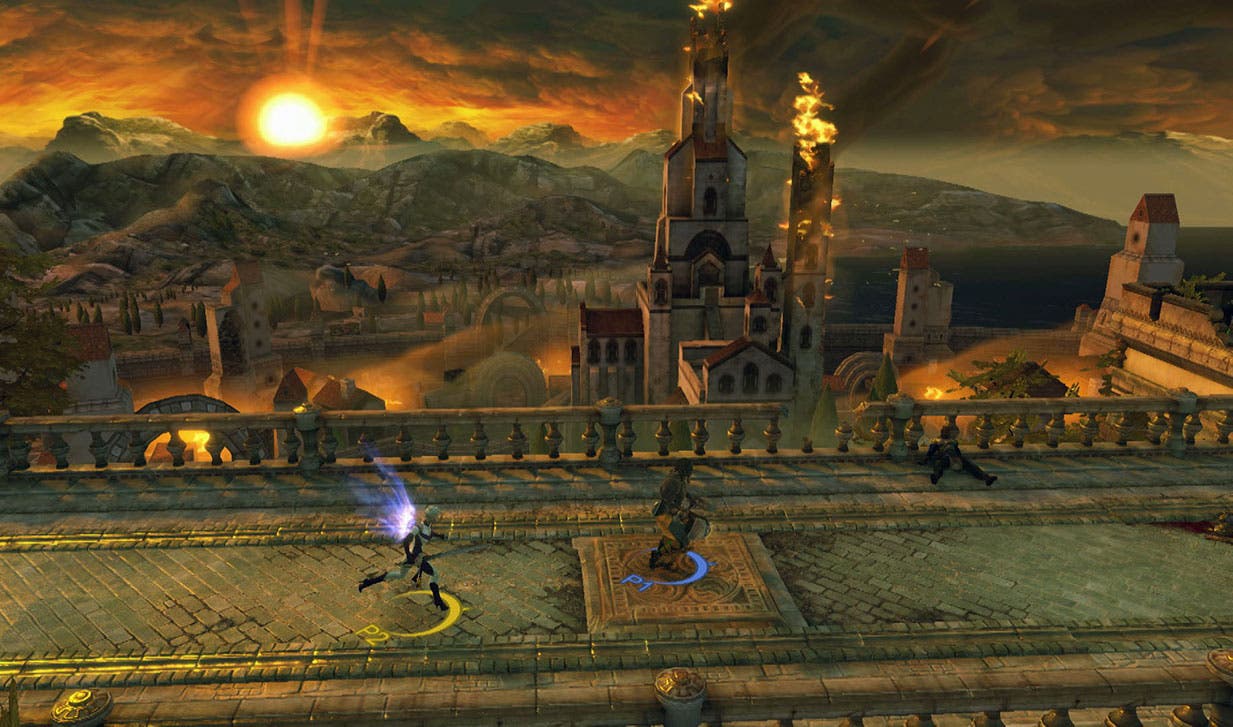 The Sacred series is likely not a household name when compared to the likes of Diablo. It filled a very specific void in the hearts of those who appreciated a deep action RPG. There is no such void now, and the original series’ developers are no more. So when Deep Silver went to resurrect this dormant series, it was going to be interesting as to what the result would be. While a much different game, Sacred 3 is fine in its own right, is not the Sacred you remember or even want. 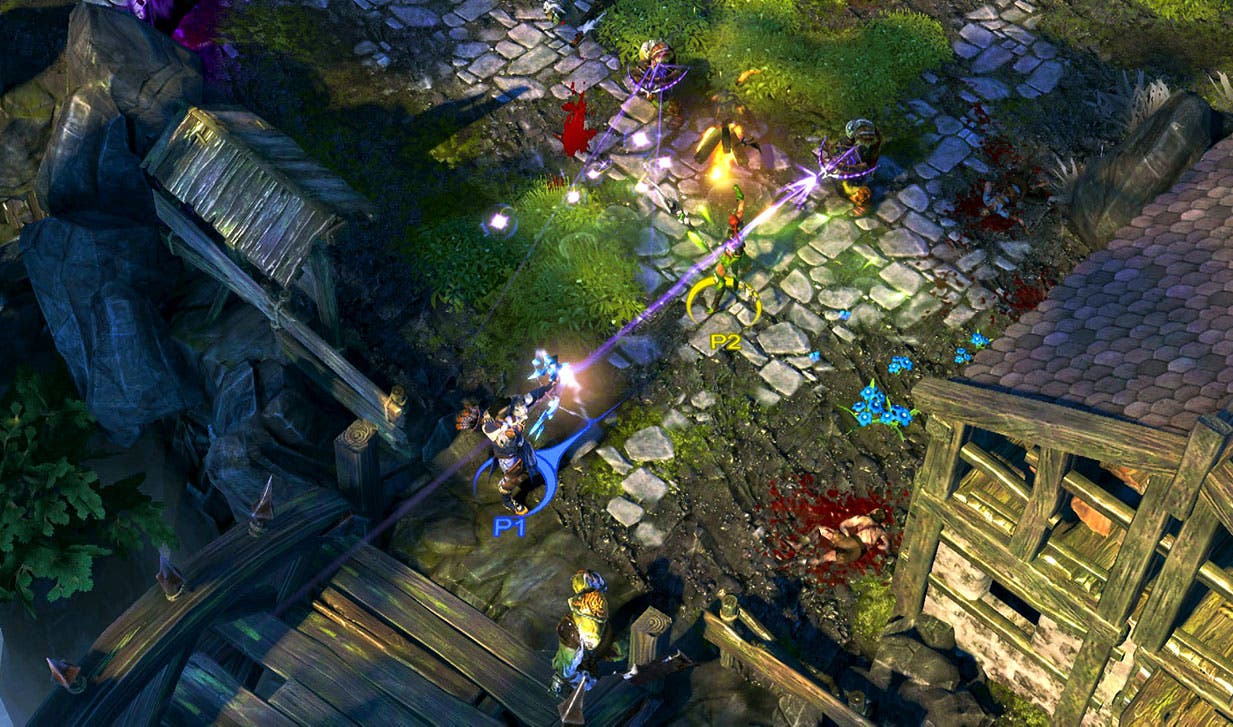 You see, Sacred 3 is no longer an open-world action RPG, but rather a hack ‘n’ slash brawler-type with light RPG elements in tight, linear levels that help give the appearance of character progression. I’m not sure if the scope or scale of the game changed, but there are many areas that look like they’d lead to explorable dungeons, but don’t. This feeling carries through the entire game, with open sewer covers, entrances with doors broken down, and seemingly split paths that just lead to treasure without any sort of challenge to earn it.

The Heart of Ancaria was once protected, but now the forgotten warriors leave it unguarded, and in true good vs evil fashion, it is up to you and a ragtag group of warriors to become heroes to stop the Ashen Empire from obtaining the artifact. A serviceable but shallow story sets you up for action, but the cutscenes and mid-level voice acting ranges from hilarious to embarrassing from one minute to the next. Uneven dialogue and tone aren’t the only things at fault here. You have four characters to choose from, ranging in looks and abilities, and a fifth which is locked behind paid DLC. As to whether this character is a meaningful addition or not, is unknown to me as I did not have access to this character for review.

There’s no shortage of beauty, as the world is lush and fantastically vibrant from scene to scene. Lava has a disturbing, pulsating glow as it rushes by, ice shimmers and reflects the day’s sun, and elemental effects stand out, giving Ancaria a sense of place and color in what is otherwise drab and a world in dire straights. 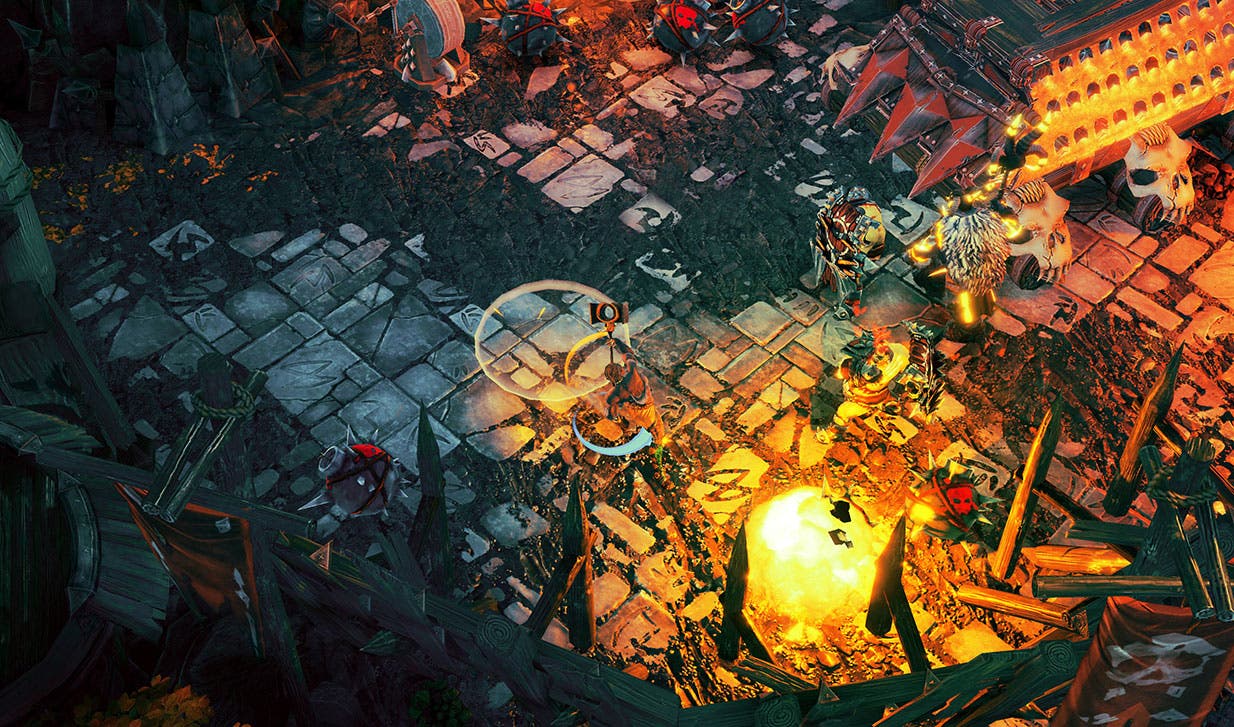 Fighting is simplified, but generally fun. There are only a handful of enemy types, but with so many enemies on-screen makes you feel like a badass as you dispatch them handily. With your charged attack, you can break the shields of tougher enemies and lay into them with either of you active abilities. Combat is fast and fluid, and you are always significantly outnumbered whether playing alone or with friends. It is here where Sacred 3 excels.

As you slay enemies, you’ll quickly learn there is no loot to be had. You cannot pick up armor, weapons, or anything to equip your character with. There is only gold. Gold to be used to purchase health or “mana” potions at vendors in-between levels. New weapons can be earned arbitrarily by gaining levels, and the gold can also be used to upgrade weapons in a set path. 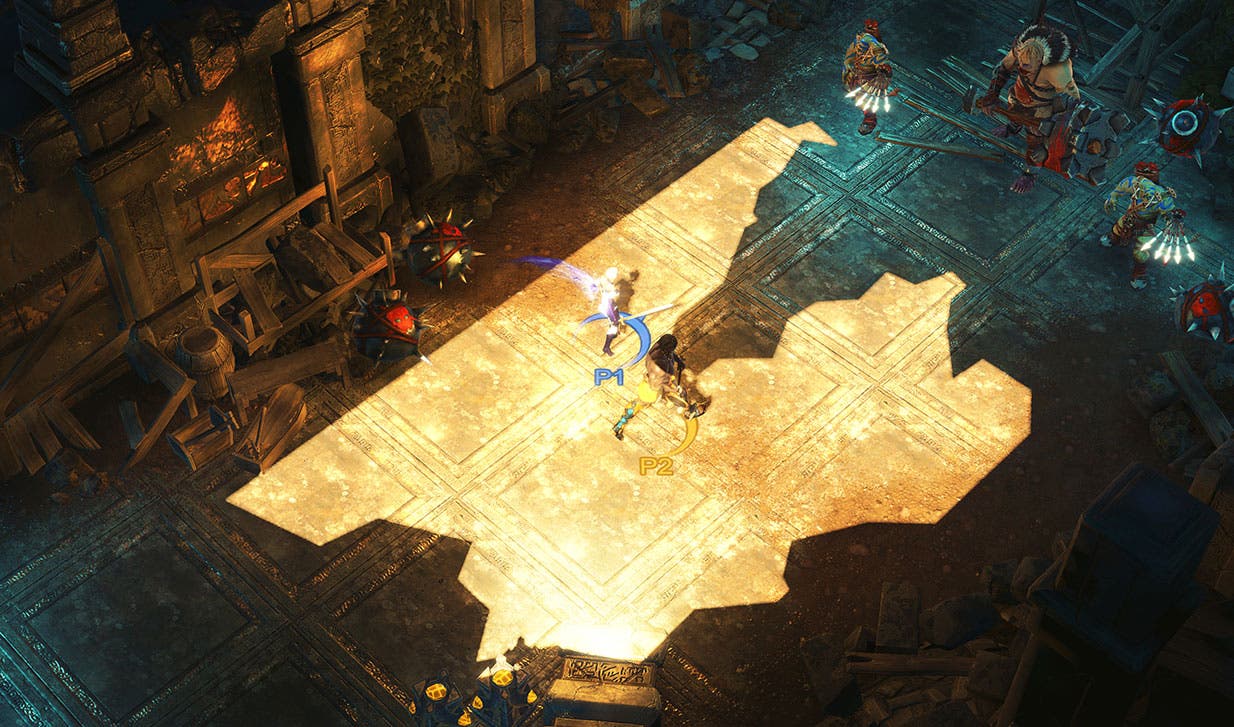 Each level of Sacred 3 has a nasty habit of repeating itself. Generally it goes like this: fight groups, run through artillery strikes of volcanic rocks, or something else falling from the sky, reach checkpoint for boss, walk two feet, trigger a cutscene, and fight the boss to end the level. Repeat this for every story mission and only a location change is the differing factor. It’s disappointing.

As stated, this is not an open-world. But there is a map that you traverse linearly. Along the way you have challenge levels for leveling opportunities, and to earn more gold. Challenge levels help alleviate the tedium by giving specific goals to strive for amongst the combat, like fighting off waves of enemies or clearing a single area of enemies. 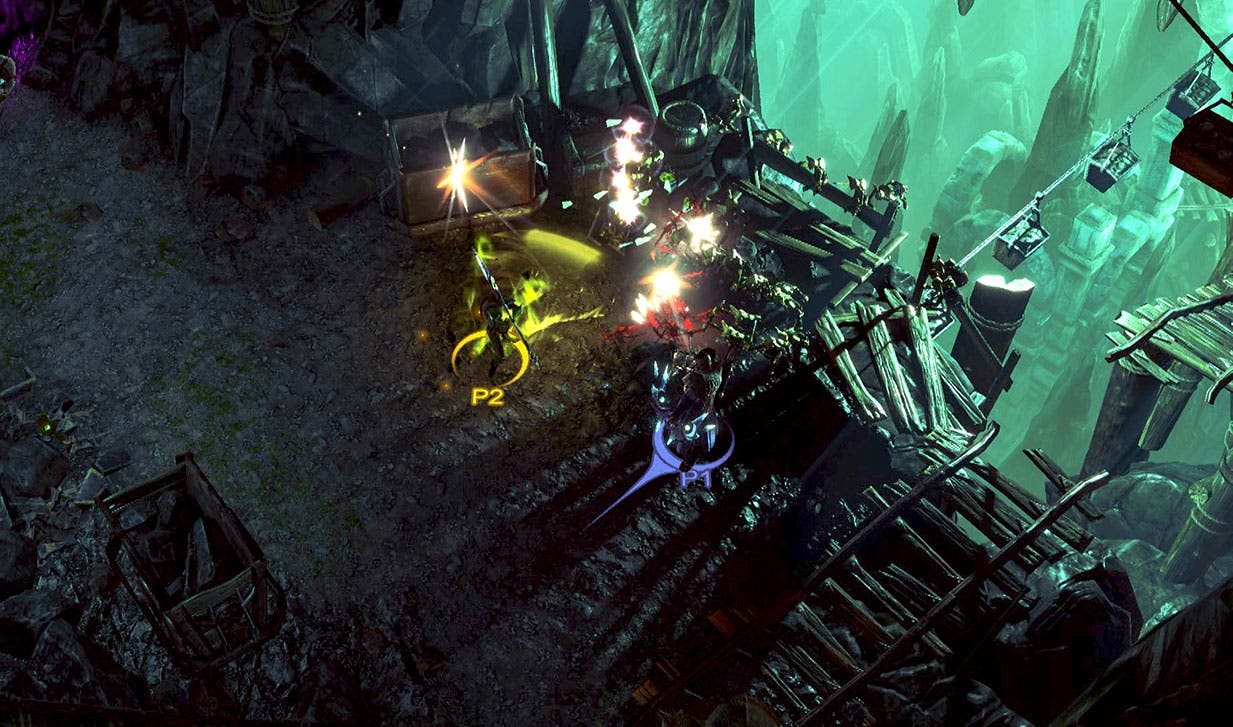 It is easy to see that co-op play was in mind from the get-go. End of levels shows who did better in what kind of categories such as kills and gold collected. Playing solo is a challenge, even on easy difficulty. When a friend joins you, the numbers of enemies increase, but the power of two or more help clear the screen just that much faster. Should one of you fall in combat, can be revived. Solo you must use a health potion, or be left for dead.

You are not allowed to quit the game mid-mission. The game creates checkpoints, but they only save your character progression, and not character position. So you must start a level with the intention of beating it, or you won’t make any meaningful story progress.

Sacred 3 is clearly aimed for players of the console version on either Xbox 360 or PlayStation 3, as the PC version with keyboard and mouse feels incredibly awkward. To play with a gamepad, you must activate the controller, only on the main menu – a very odd restriction. Else you run the risk of activating a second player locally. Then you have to restart the game or fumble with trying to disable the second player. 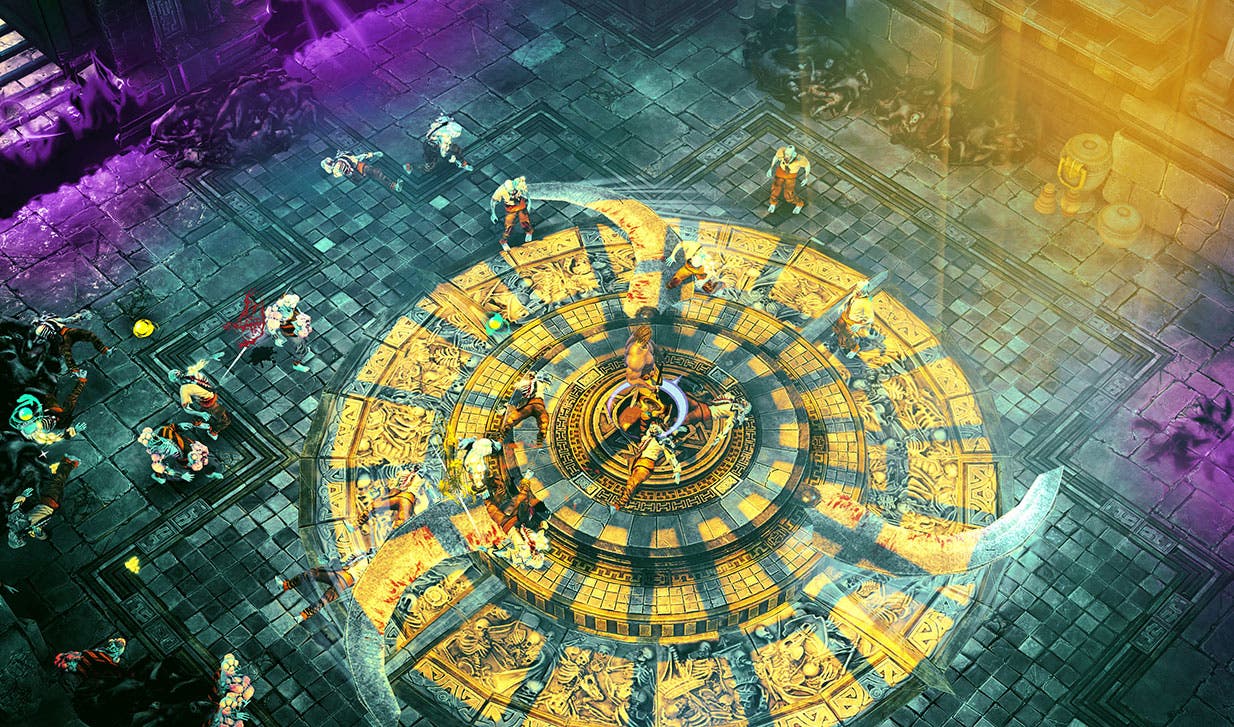 The purchase price is too high amidst the changes to gameplay and other oddities surrounding this game. Had this been a game not bearing the Sacred name, it would have been understandable. It is far too jagged of a game to recommend for the price that’s being asked of you. For as simple and mindless gameplay it provides, it’s much more fun with a friend, but punishingly difficult solo. Sacred 3 just doesn’t live up to its predecessor, or to the genre it wants to be.