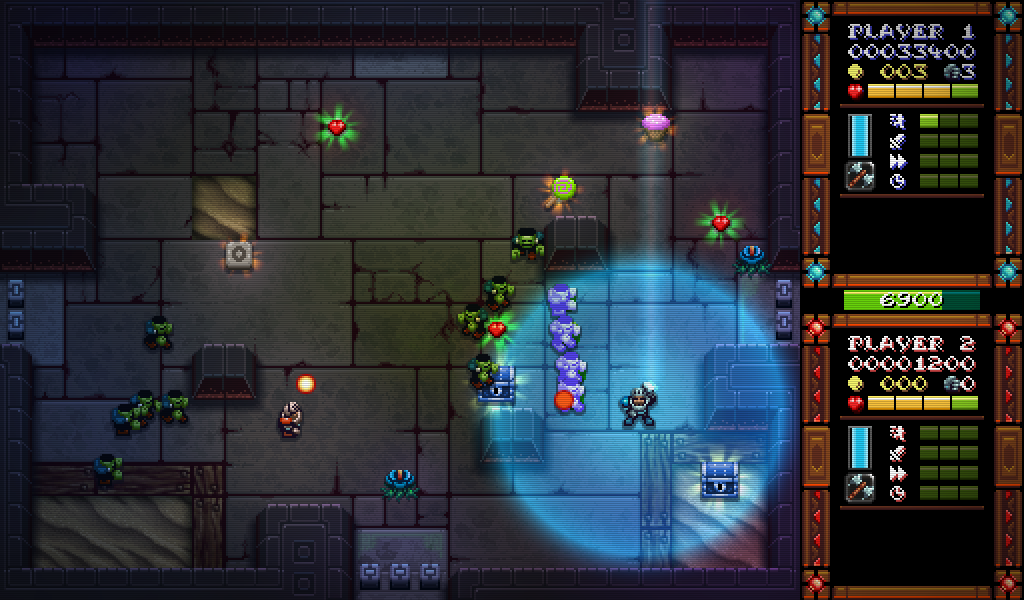 If you’ve played Robotron, Binding of Isaac, or the recently released Runers, you probably have a good idea of what this game’s about. Iron Fisticle does things a bit differently, though. You’ll start off in a room pretty weak, as you clear the room, enemies will drop power-ups that can stack and increase your character’s stats via leveling up. While you don’t increase any specific attributes directly though leveling, the game will automatically increase your maximum vitality, for instance. As strong as your character can get, you are equally as fragile. Any death means game over, and you have to start again.

If you take too long to empty a room of bad guys, a big “Hurry Up!” appears on the screen. Not long after, stronger, armored characters come in that take a lot to kill, so it’s best to move fast. Once a room has been cleared, a key is then dropped. You’ll usually have more than one exit to choose from. After leaving a room, a map will appear showing your current position and where the boss is positioned. You’re free to move about the level as you please, but you’ll be inclined to go straight for the boss, and while that’ll get you to the next level quicker, this being a game about improving character attributes and score, so you’ll be at a disadvantage and reach more difficult stages before you can handle them adequately. Controls are simplistic, but sublime when using a gamepad. The game is explicitly clear that it wants you to use a controller. If you want to try to navigate these environments with a keyboard, you can, but are likely to give you a hand cramp while doing so. All buttons can be remapped, allowing for total customization that’s incredibly welcome.

The completely optional scanlines for Iron Fisticle have no effect on gameplay, and I had a hard time deciding whether I wanted them on or off. I eventually settled on without them just for the extra bit of visual clarity. But either way, the game looks gorgeous and runs absolutely smooth while playing.

While the game doesn’t need it, bonus stages split up the top-down shooting that allow to earn more coins along the way in a side-scrolling platformer. In a slow crawl, this eats away the left side of the screen, with little room for mistakes. Coins also drop from enemies that can be used in shops to purchase faster movement speed and boost power-up duration.

You don’t have to go it alone, as you can bring in help in the form of local co-op. This doesn’t change the game drastically, but it’s a hell of a lot more fun than the typical solo games of this type. Leaderboards don’t play a huge role, but are there for comparing to your friends and the world. And as someone who is in the Top 25 players in the world, I’m pretty proud of myself – Until everyone else starts playing. Iron Fisticle is deep, challenging yet rewarding. And while retro-inspired, borrows many modern elements that makes it stand out from the pack: the beautiful art, the co-op, and the ways to improve your character. This this a labor of love worth delivering.