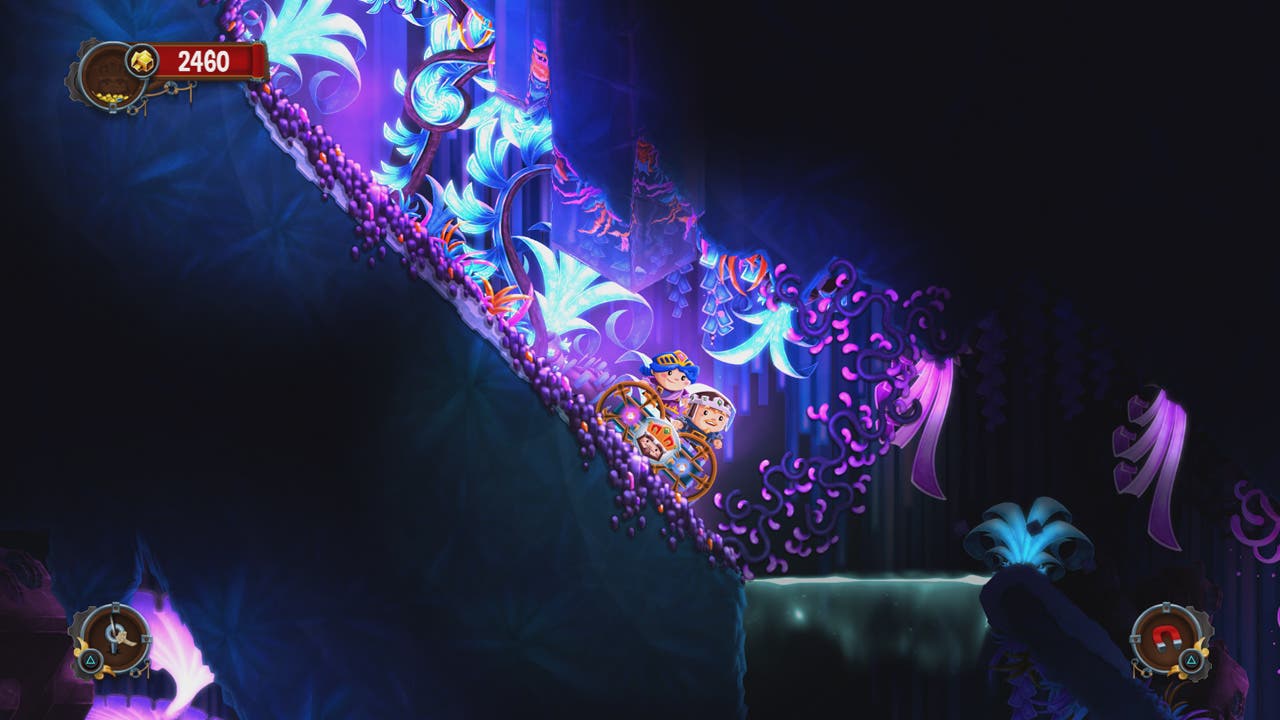 Chariot is beautifully animated and charismatic, one that gets you to smile and laugh as you play. From the fun way that physics plays a huge role in how you play, to the incredibly well done co-op. This is one of the most enjoyable platformers in recent memory for all ages.

You assume control of the princess, who is the daughter of the recently the deceased king. She is in charge of taking her father to his final resting place. But the king being greedy, returns in a ghostly form to inform his daughter that he wants to be placed in a sepulcher, buried with all the riches his daughter can find. Not necessarily a normal task, but she takes it on anyway, while roping in her fiance, who assumes player two. The king quickly becomes the “Goldilocks” of this game, never satisfied with each sepulcher introduced.

It’s a bit morbid to be pushing your father’s carcass inside a casket on a chariot, but there’s a bit of humor with a jovial attitude that elevates it above the macabre. 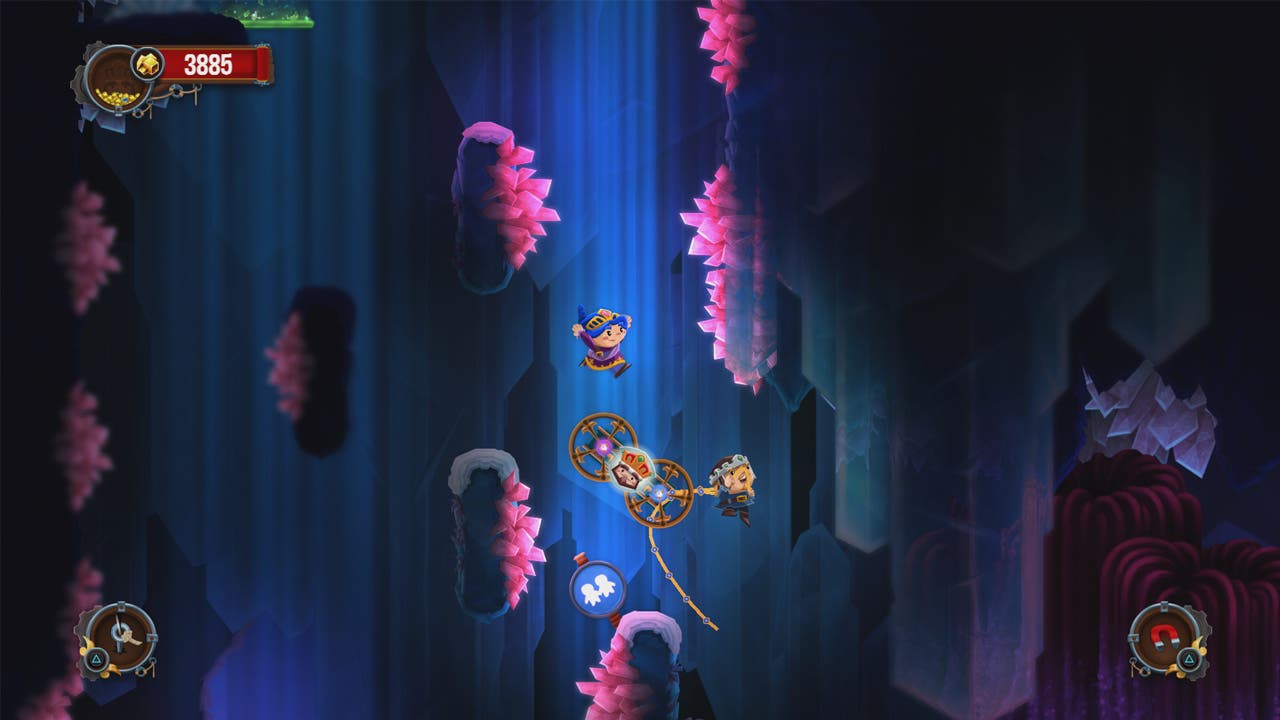 The chariot itself, is very mobile. With it’s large wheels allow it to over come most obstacles by being pushed, or pulled by a rope. A few later levels you’ll be tasked with more obstacles that require tricky platforming, but nothing too taxing. Life and death rails are later introduced that keep you on your toes. Life rails can be walked on by you, but the chariot drops through, and the inverse for death rails. Environmental hazards like lava also create opportunities for failure.

There are times that you have to abandon the chariot to get it to where you need it. Tapping the jump button does a small jump, while holding will get you to bigger heights. Get stuck? There’s a button that will reset you to the last checkpoint, or in co-op, it will respawn you next to your partner. 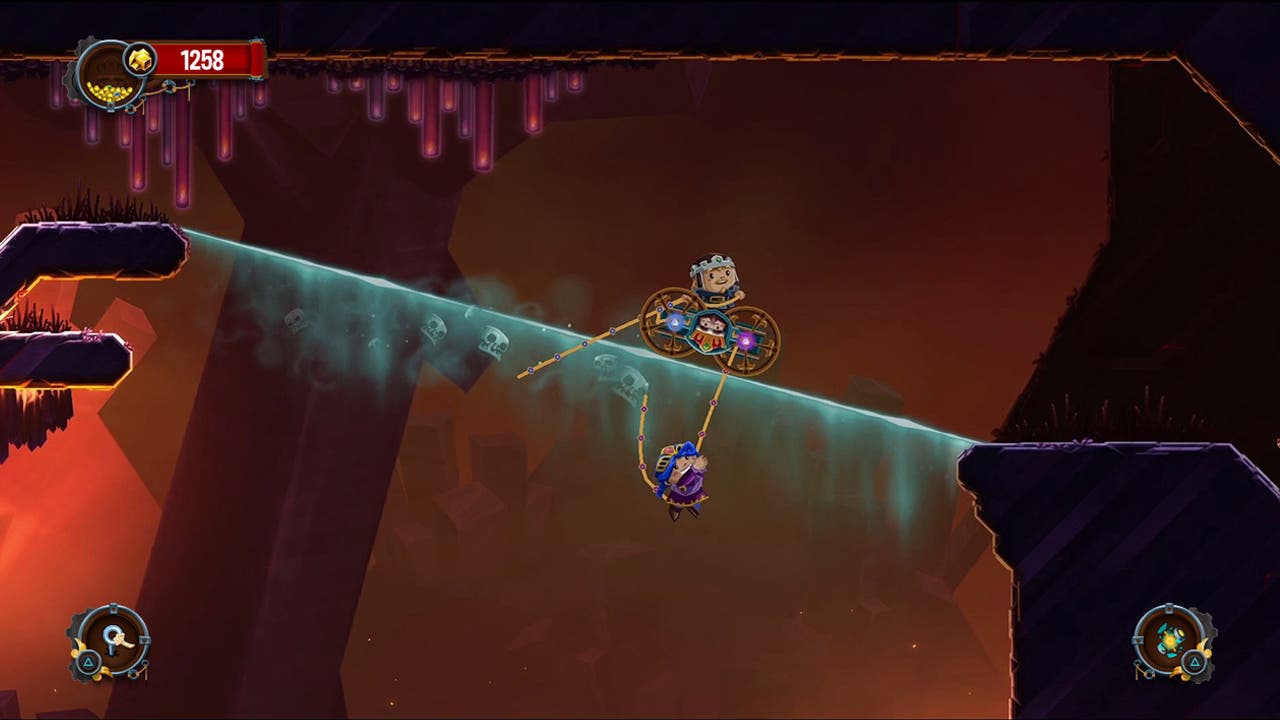 In an interesting twist, the chariot is the one must pick up the jewels, and not the playable character(s). This introduces clever ways of getting the chariot to tricky locations to pick up the most loot. The chariot then becomes a character, as you have to care for it, as it holds your father as well as it being a useful tool for traversal.

And sure enough, there are those out there that want the riches to themselves. Animals such as bats and penguins come in the form of “looters” who will take it off your hands should you make too much noise near where they reside. They can be swatted away pretty easily, and create tense moments as you don’t want to give up any of what you’ve earned through the level. 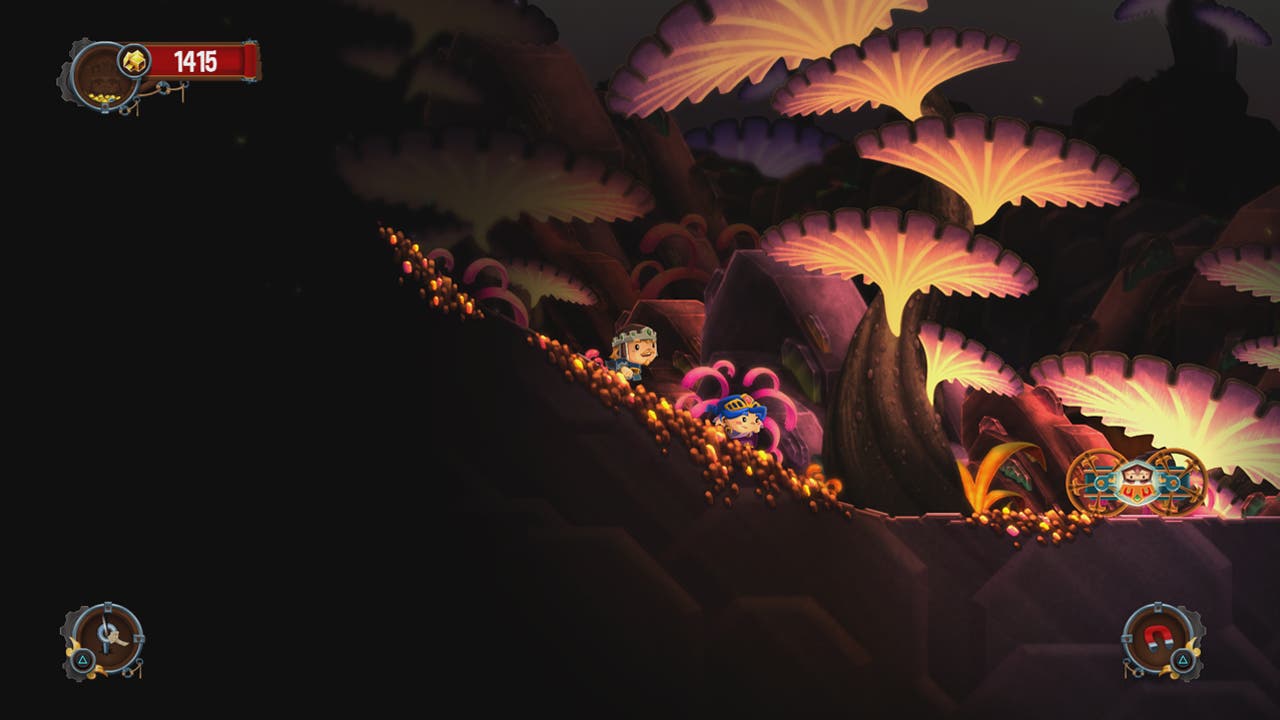 Upgrades can be found in the form of blueprints during your time in a level. Levels are extremely expansive, and offer multiple paths for would-be explorers. There’s a path of least resistance, but there’s rewards for those who wish to explore everything or try different paths on return trips. I couldn’t help but be reminded of Spelunky, with being able to discover different entrances, and collecting money. There’s even speed-run opportunities after completing the level for the first time.

Blueprints allow for upgrades such as a lantern to light dark caverns, which when unlit, scares the king for no reason whatsoever. And gadgets can be purchased, such as a peg that can pin your chariot to a surface while you get your footing. 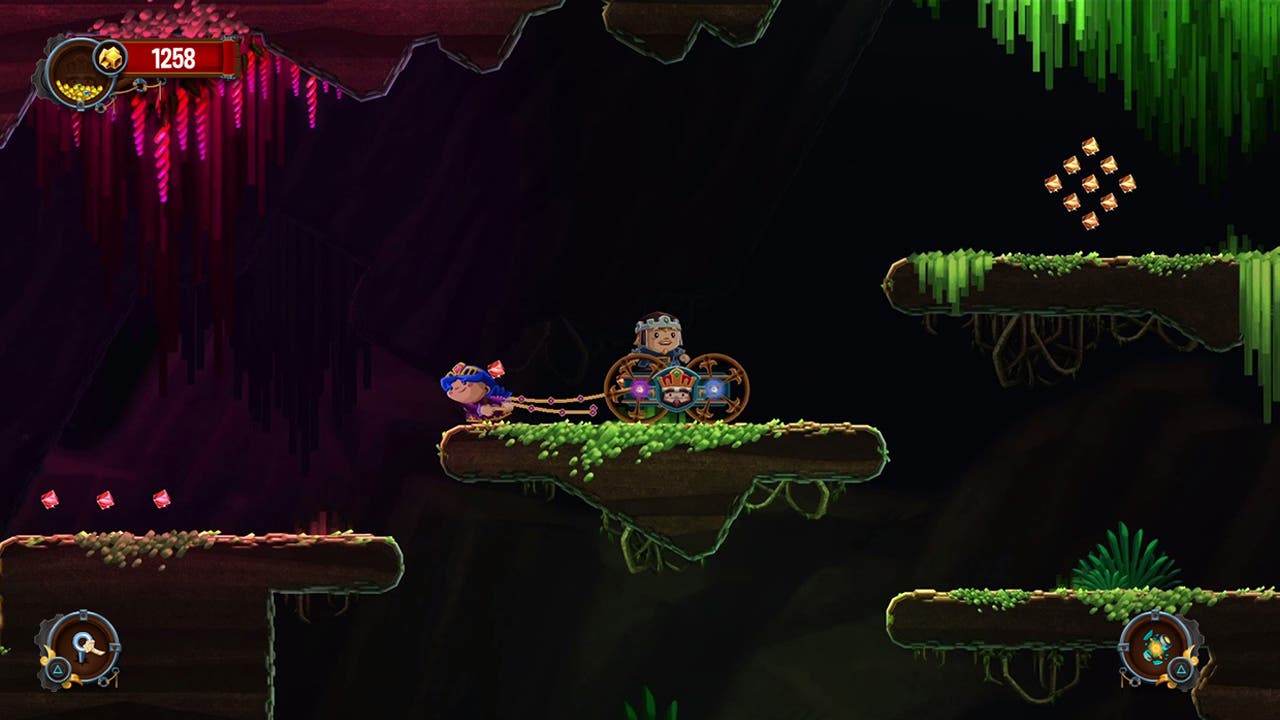 Chariot is almost more fun in co-op, not just for working together cohesively, but there’s areas you just can’t get to with one person. And interacting with the physics gets downright hilarious. It’s cute, fun, and challenging all while providing great couch co-op, or even single player fun.

A PS4 code was provided by PR for review purposes