“We’re really appreciative of all the support from long-time fans as well as new players to Shadowgate,” said Karl Roelofs, Design Director with Zojoi. “We’ve been receiving tons of great feedback and, with Halloween approaching, it was only natural to treat both new and existing players with an update that brings new game modes and improvements to current features. We think these additions will not only add replay value to the game, but make it a bit more fun for first time players unfamiliar with the Shadowgate franchise. Plus we’ve always wanted to do a side-quest paying homage to the Great Pumpkin but with our own take on the classic.”

Also with this new Shadowgate update, players will enjoy improved save and load features, object visibility options, a retro graphics add-on and much more that will help adventurers navigate the treacherous dangers of the living fortress Shadowgate. 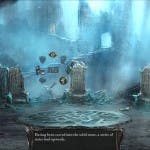 Shadowgate is now available on Steam for both PC and Mac for $19.99.