A selection of new Fractured Space ship and crew art has escaped from the airlock at Edge Case Games, a new British games studio formed from the team behind Strike Suit Zero. Fractured Space is an online multiplayer, tactical space combat PC title set to enter Early Access on Steam later this month–players will command gigantic capital ships in team-based space battles. The ship artwork shows the massive scale and intricate detail of the Sniper and Hunter ships in two new renders. The new crew artwork also introduces the characters who will be responsible for how player ships perform in battle. Once the Crew system is introduced, players will be able to boost the performance of their ship in certain areas, such as mobility or armor. Ships will always feature five members of crew, including a Captain. Crews will also level up as the player does, becoming even more effective at dealing with the enemy threat and instrumental in defining your play style in battle.

Each ship in Fractured Space is unique–differentiated by manufacturer, ship class and the loadouts they have access to. The Hunter and Sniper are both classed as medium-sized attack ships, each around 750 meters in length. The Hunter shown is a Zarek Industrial ship, which possesses the Blink Drive ability, allowing it to cover large distances in an instant. The Sniper is a USR ship (United Space Research), designed to inflict huge damage from a distance. 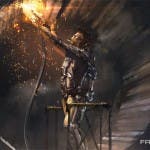 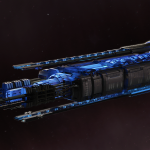