Fallen Enchantress: Legendary Heroes updates to 1.8 and new DLC, “Battlegrounds” on the way

Stardock announced today that the sixth downloadable content pack and eighth major patch for its highly praised fantasy strategy game, Fallen Enchantress: Legendary Heroes, will be available November 25 through Steam for $4.99 (http://store.steampowered.com/app/333040/). The Battlegrounds DLC pack greatly enhances replayability by adding 15 tactical maps and more than 20 stamps for the map generator to use to create unique gameworlds for each playthrough. Stardock is also giving all customers the new monsters of the 1.8 patch for free on the same day.

Fallen Enchantress: Legendary Heroes is the third game in Stardocks Elemental series. Launched to both commercial and critical success, the game begins after a cataclysm has reduced civilization to rubble, leaving players to carve out a home for their new kingdom and thrive amid the many dangers of the ruined world. Rival empires, however, are greater threats than any monsters and must be befriended, conquered, or held at bay long enough to dominate the world through magic, questing, diplomacy, or blunt force.

The dozen-plus new tactical maps added in the Battlegrounds DLC give players new challenges and opportunities in combat. You may start out surrounding or encircled by your enemies, or need to defend or assault tight chokepoints. The visual variety is better than ever with ruined Imperial highways, dark fortresses buried deep in desert sandstorms, and more serving as backdrops to the epic conflicts the break out in any game of Fallen Enchantress: Legendary Heroes.

The Battlegrounds DLC is joined by the free version 1.8 patch, which adds six all-new monsters with unique abilities to the game, including the flame-wreathed Gilden Lion and the battle-frenzied Obsidian Legion. Fallen Enchantress: Legendary Heroes version 1.8 is free to all owners of the game. 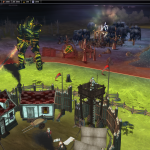 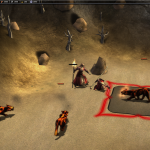