Brandishing the reinvigorated Sierra brand, which is a digital-only publisher under the umbrella of Activision, comes Geometry Wars 3: Dimensions. Lucid Games, (comprised of developers at the now-defunct Bizarre Creations, the development house that birthed the original Geometry Wars) is under some pressure to deliver a worthy successor, after a 6-year hiatus for the series. And on all fronts Lucid Games succeeds in doing that, even introducing a campaign of sorts, that gives level-to-level challenges beyond getting the highest score (even though you’re still doing that). “Retro Evolved” would be fitting for a subtitle here, more so than any game in the series’ history.

Perhaps the most overlooked part of this, is that this release is not just on Xbox. Now being available on Xbox 360, Xbox One, PlayStation 3, PlayStation 4, and PC makes this a welcome change.

For all its flashy images would suggest, Geometry Wars 3 is a simple game. You move with the left analog stick, shoot with the right analog stick. You drop bombs with the RT/R2, and can use Supers with LT/L2. The rest is up to twitch coordination of maneuvering your ship in-between tight spaces and kiting enemies for kills. Each enemy drops a “geom”, which is a small geometric shape that ups your multiplier. It’s intrinsic to attaining a high score to collect as many as possible to score well. But you also risk putting yourself in harms way by collecting them. So the risk is great, but the reward is even greater. The first mode you’re presented with, is “Adventure Mode”, a 50-level series of challenges that are unique to each other, with high score thresholds that yield star ratings for performance. These star ratings gate your progress through the adventure mode. If you don’t have enough, you’ll be going back to earn more to proceed. If you just aren’t good enough, but simply want to see all there is, can be frustrating not being able to progress. There’s bosses every five levels which have an added layer of challenge. While the objective is to beat them, you won’t get a good score if you don’t keep shooting the littler enemies to boost your multiplier first.

But if you just want to spend $15 to get to the Classic Modes (that are found in Geometry Wars: Retro Evolved 2), you can totally do that: Evolved – three lives and going until no more are left, Deadline – a three minute best high score run, Pacfiscm – no weapons but can use gates to kill enemies, Waves – a series of increasing enemies that line up horizontally or vertically, and King – where you must travel bubble to bubble, only able to fire within the circumference of the safety bubble. They’re all here, and play wonderfully, but you would be missing out some new challenges by avoiding Adventure Mode. 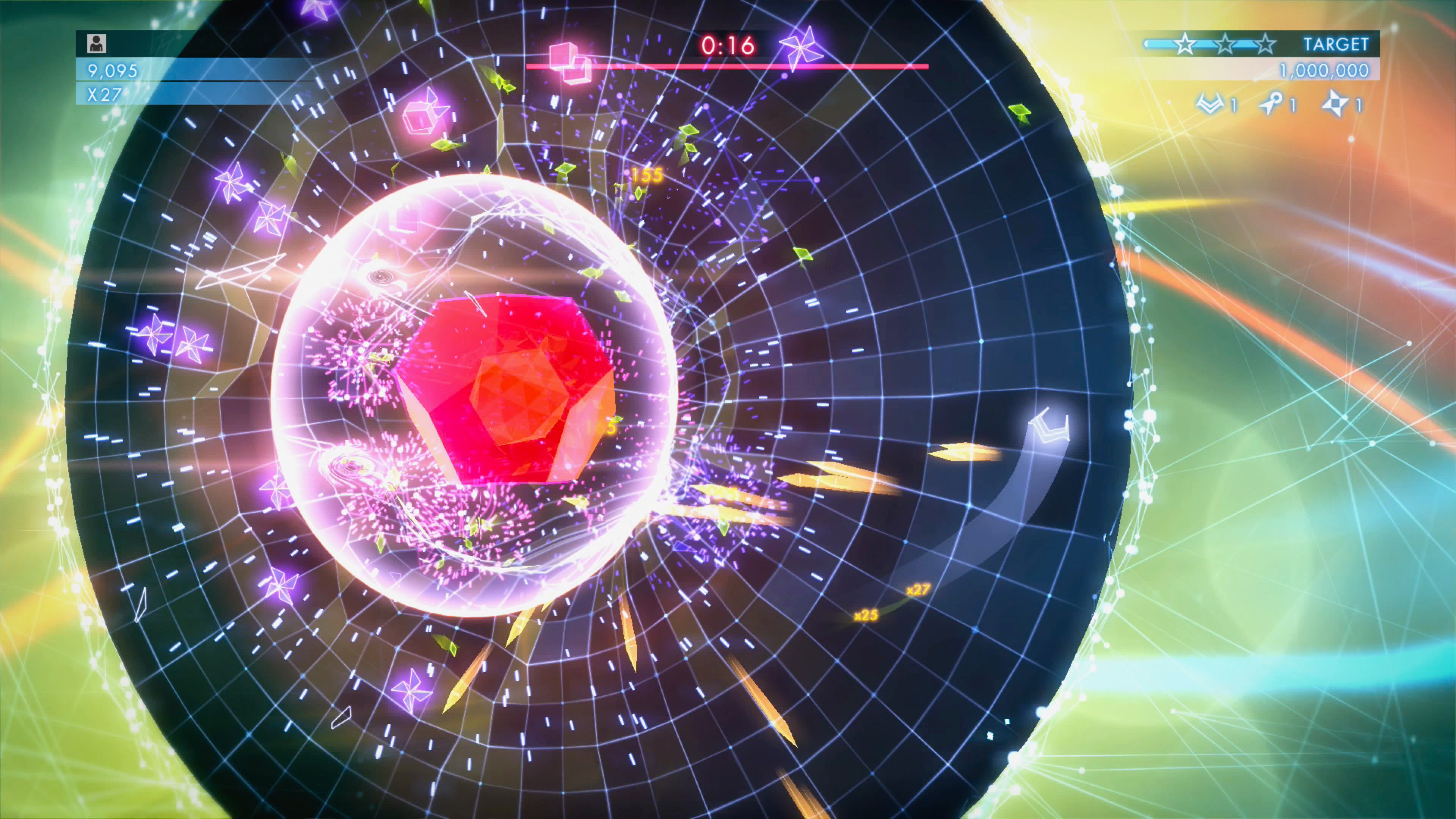 Geoms, introduced in Geometry Wars: Retro Evolved 2 are used as a currency to upgrade Drones and Supers. While Dimensions borders on the frustrating, there’s a lot of incentive to go back to earlier levels with upgraded items to demolish high scores and get you back on track to progressing through the game. Supers are pick-ups on the level after blasting all of the pieces away that form the shape of the super weapon you’re about to acquire. Drones are assists that will follow you into a level and do different types of effects, such as one that fires an extra shot, or shields you from one hit.

Geometric shapes play an even bigger role here, as stages can take place on cubes, pill-shaped cylinders, and regular square flat surfaces. Some levels have rearranging patterns, walls that become unsafe to touch, and more. This dynamic, evolving level keeps you on the move and one of the more tense elements to the game.

Each level has its own leaderboards, with your friends taunting you from the corner of the screen as you surpass them, or only barely get beyond what they’ve set. With instant restarts and quick navigation of the menus, there’s nothing sluggish holding you back.

The reprisal of the Geometry Wars theme when playing an Evolved mode is a wonderful sense of nostalgia, even for a game series that’s only been absent for six years, seems kind of odd to feel that way. But Geometry Wars 3 just feels good to play with the sounds feeling right at home.

Visually the games are identical to each other when comparing the PS4 version to the PC. The exception is that the PC has resolution options, and a “Very High” setting, I could not see any visual or performance differences between them. Though, I imagine comparing these visuals to the Xbox 360 and PlayStation 3 counterparts to be a different story. It’s great that no matter where you play Geometry Wars 3, you’ll have the same gameplay experience, save for having to record high scores each platform separately. 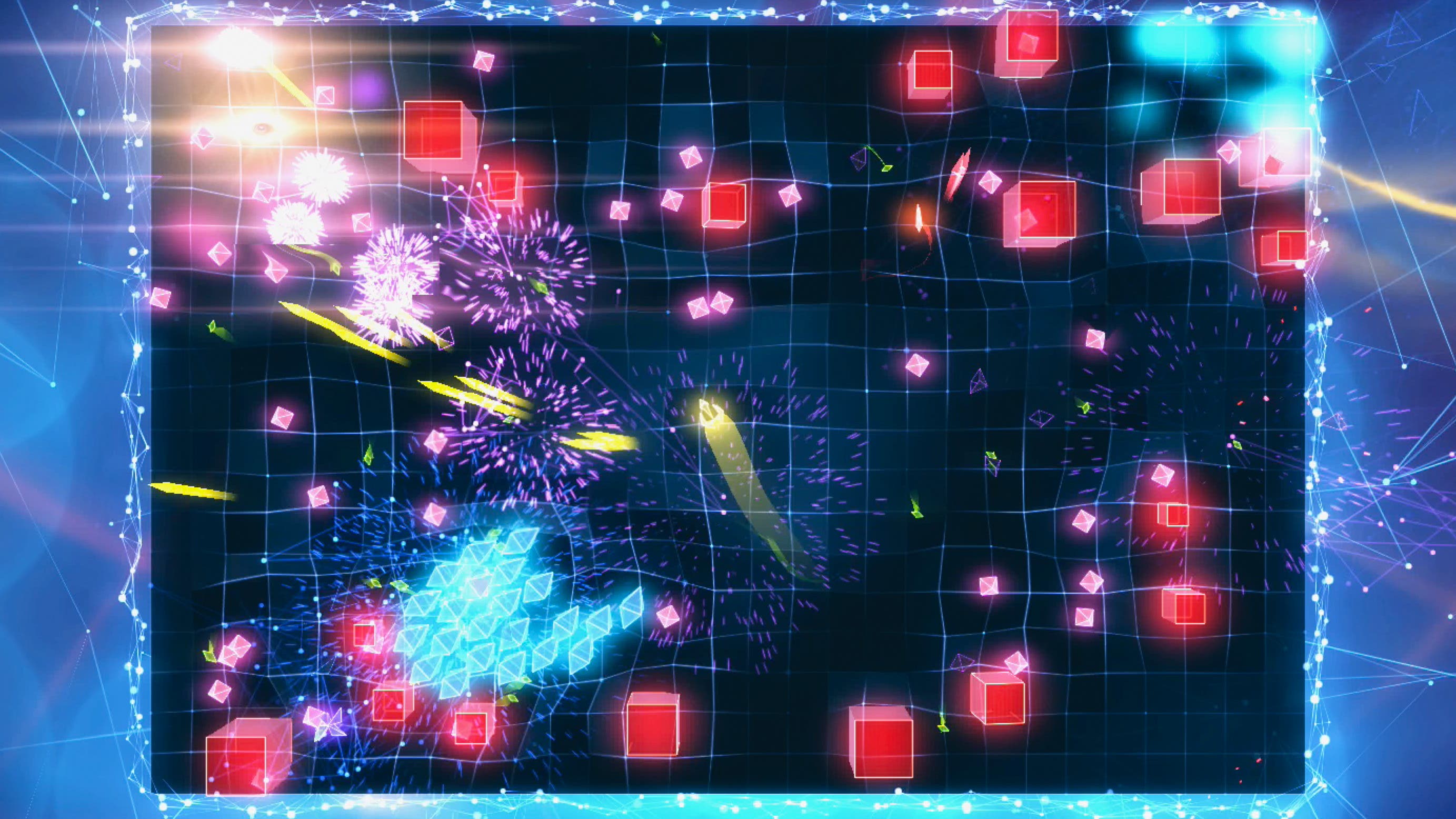 Online is a competitive, team-based mode whereby teams compete in trying to obliterate the boss first, whichever team does this, wins. It’s a simple concept. However, I was only able to get into a couple of these matches, as it doesn’t seem to be very popular.

Local Co-Op pairs you up with friends to achieve a cumulative high score. This mode is fun, but super chaotic and hard to keep track of your ship, and not get freaked out at the sight of other ships moving and shooting as well. It takes time to get used to, but wasn’t a particular favorite of mine. 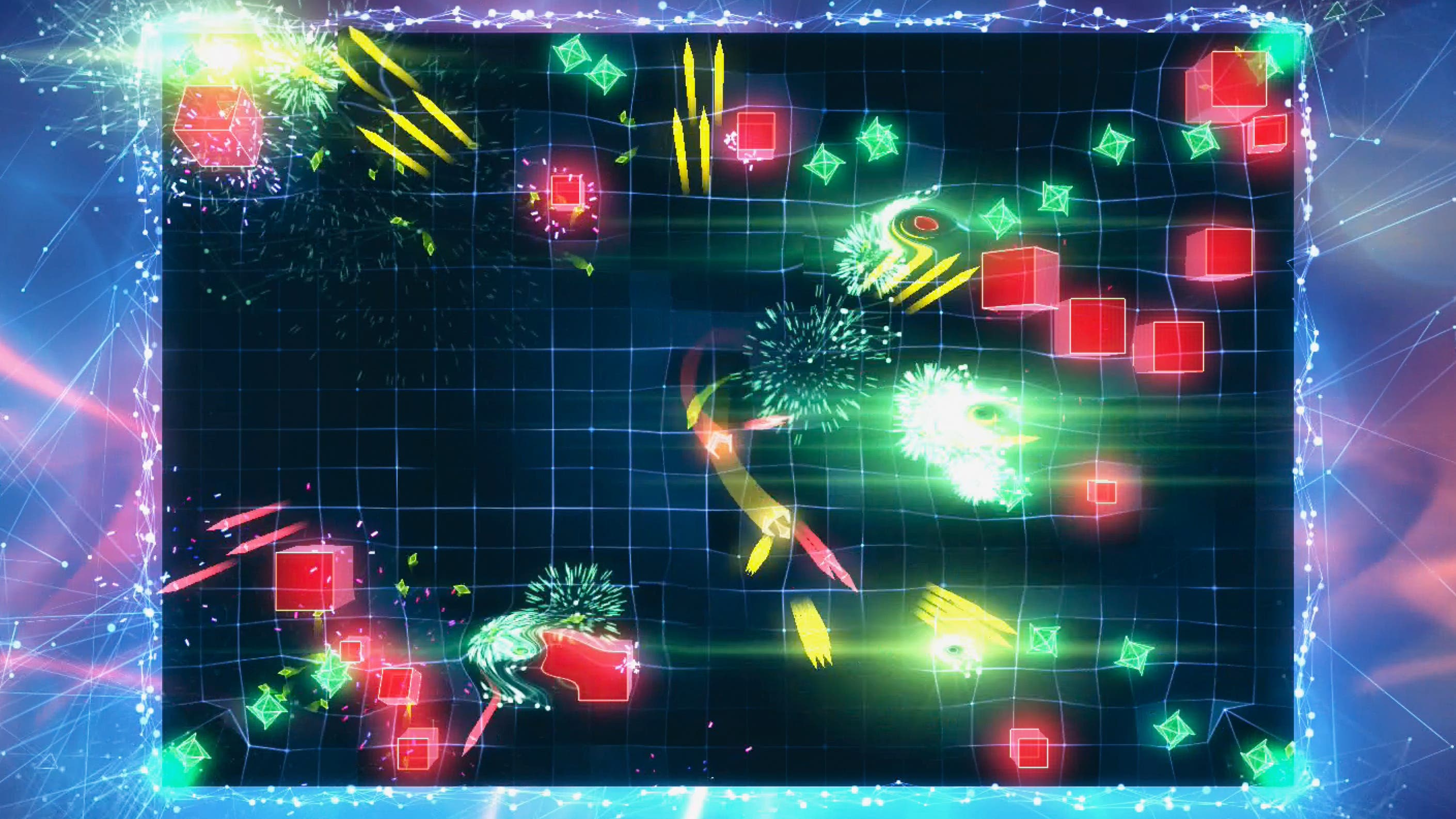 The worst thing I can say about this game is that the backgrounds are too bright and flashy. It distracts and seems to wash out the focus on your ship and the geometric shapes out to kill you. Geometry Wars Retro Evolved 2 was really good at saturating the neon shapes, making them the highlight, and there was no mistaking what was happening on-screen. Here, I kept losing sight of myself and was dying unnecessarily.

The best thing I can say is that this is the most fully-featured Geometry Wars game yet. Lucid Games was able to capture the lightning in the bottle that Bizarre Creations was able to do so well. And while it doesn’t improve on that, it replicates it so well. There’s Adventure Mode, Classic Mode, Bonus Levels, Online, Local Co-Op, and leaderboards to chase high scores. You can’t help but keep retrying a level to place higher to best yourself, or more importantly, your friends. 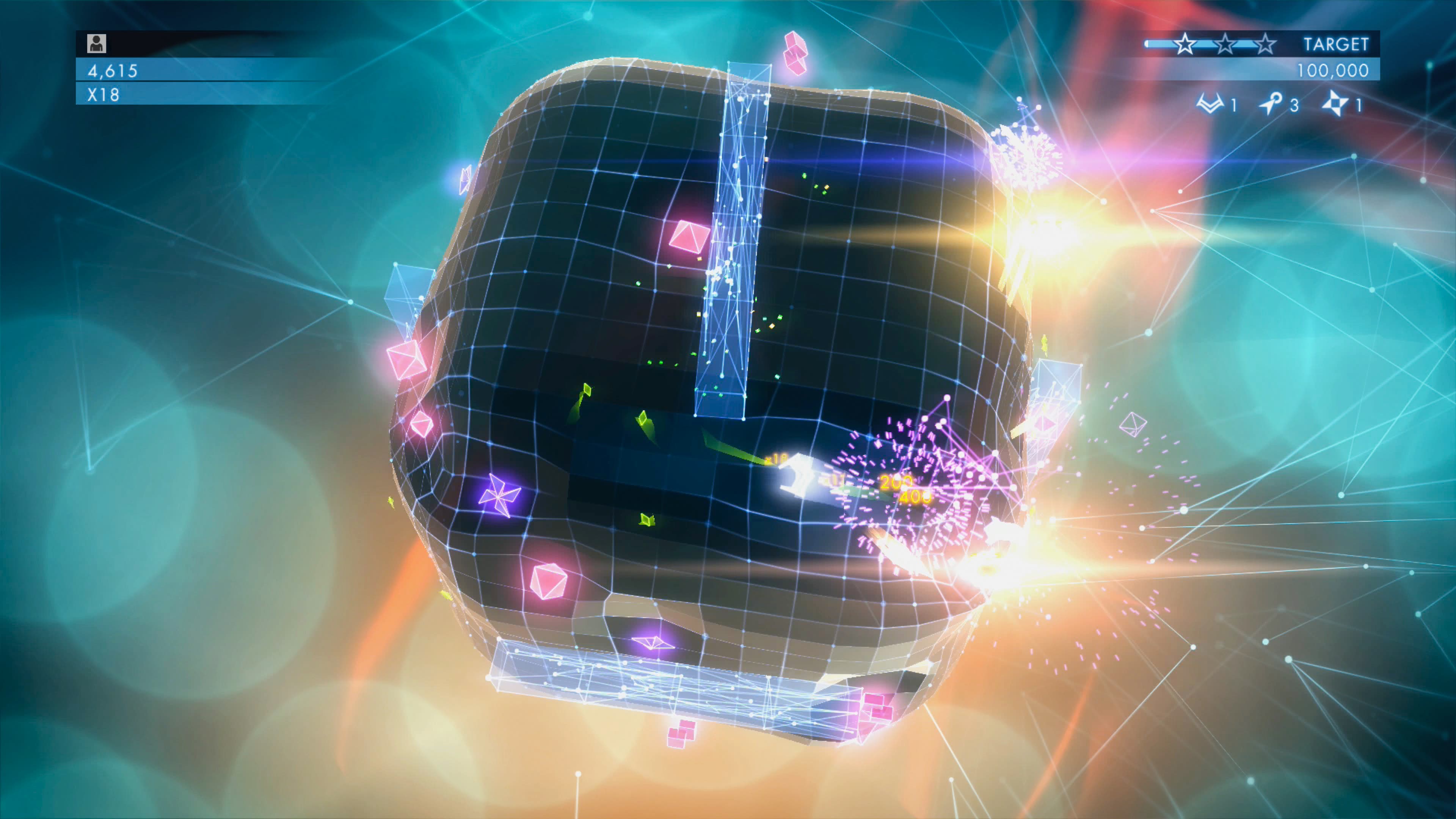 Geometry Wars 3: Dimensions is accurate in name, providing depth and nuance to what was ostensibly a flat game previously. Even if all you’re coming here for is the “Classic Mode”, it justifies the purchase. But Lucid Games didn’t rest with the familiar, the inclusion of “Adventure Mode” is a great, structured system with each level being distinct from the next, but not every level is a winner. However, it is one of the most unique, challenging, and ambitious modes that the series has ever seen. And for that, Dimensions is a great continuation for this series.