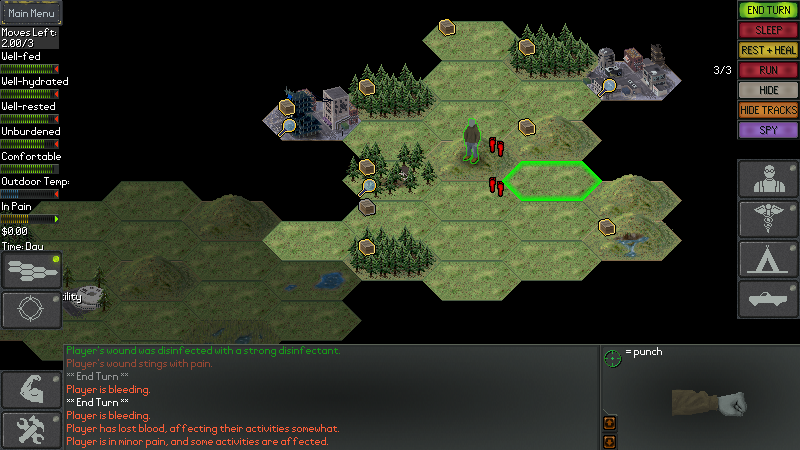 NEO Scavenger is a post-apocalyptic, turn-based RPG that takes place in and around the city of Detroit. The notion of waking up confused, starting over, and learning how to scavenge all over again in a new world is intriguing, and compelling. And this applies to playing the game, as each playthrough is a new experience, albeit a very frustrating one that holds it back from being enjoyed more than it could be. You start by picking abilities, each with a point value associated, that can make for a multitude of different starting characters, each with many or few characteristics. You must choose at least one weakness to counteract some of the abilities you’ve chosen, making this one of my favorite character creations yet. When the story starts, you’re thrust headfirst into it, without any tutorial or guiding hand to help you. It’s all or nothing. It is probably going to take a few playthroughs to figure everything out, and then construct something that works best for you. You’ll never be prepared for every situation, there is no “perfect build”.

This being a survival game, the first day is the same as you’ve come across before: find shelter, food, and water. And not so much in that order. You’ve got to find clothing to prevent yourself from freezing to death, you’ll never be a fashionista with matching clothing items as many RPGs allow you to do, instead you’ll often like a fashion nightmare. You can only hold things in your hands until you find a backpack that can support more than what your hands can hold. Engaging in combat is not as fun as one would think. The turn-based movement happens at the same time as enemies, on a hex-grid, similar to that of a board game. It creates this sillyness as you inch closer to each other with each move. This does allow you to ensure your strategy by the time you meet face-to-face. Try to imagine standing in a field, 50 feet apart from one another. And now, you each take a step towards each other in rotation, it looks awkward and plays just awkward.

The idea of having to pause and consult a wiki for recipes and other tips, is like a tribal knowledge whereby you have to communicate with others to gain knowledge in this new world. This unfortunately takes you out of the game, but the community for NEO Scavenger, after Early Access and now release has some really solid methods. But in the end, it’s actually all down to luck thanks to the game’s procedural generation. In fact, procedural generation is the biggest enemy, not the weather, baddies, or lethal berries I’ve made my character ingest. The story and environment are immersive and engaging. But it is difficult in ways it shouldn’t be, in that it is at odds with itself. This is a world I wanted to explore more, but the game doesn’t allow for exploration as it punishes it. As I got closer to uncover, I got yanked away due to an untimely death or a scrape that became more severe than it should have. It is difficult because it chooses to be, not because the game calls for it.

The graphics are retro-inspired, but do a disservice to the gameplay by making it hard to determine what items are at first glance. Now, mousing over an item can reveal the information you need, but that kind of defeats the purpose of having graphics. It would be more effecient if you were able to visually identify these items without a chance of confusing items with another due to their similar size and shape. I would love to play a version that had an easy mode or otherwise provided an ability to reload a save. The barrier for entry in NEO Scavenger is high, which put me off initially, and after several replays and rummaging through wikis or a PDF, was I able to become more successful in longer runs. NEO Scavenger is not meant for everyone, and while there is a story in this game somewhere, it’ll be damned to let you find it easily.