ScreamRide is a roller coaster construction game, putting you in the shoes of an employee at the Screamworks International Research Facility. Part of your research is to build coasters where intensity and excitement are top priorities. Even if it means launching people into destructible buildings or sending them flying into aircraft. This game is a hoot. It’s simple to play and easy to get hooked beating high scores. Giving you three different modes of play from intense action to tickling your creativity bone, you could say it’s quite a wild…ride.

ScreamRide’s career mode gives you three paths to follow: Scream Rider, Demolition, and Engineer. In Scream Rider you’re taking control of the coaster car trying to earn points and complete the pre-made tracks in the fastest time. You can accelerate, brake, and lean the car from side to side to prevent derailing. Getting your car on two wheels and keeping it there gives you even more bonuses to your score. This one can be quite fun to play if you like competing with your friends for those coveted high scores. It’s also great fun to feel like you’re actually riding on this crazy coaster.

Demolition, will feel very familiar to anyone who’s played games like Angry Birds. It’s a physics based destruction game that has you launch riders inside giant balls at buildings and objects. As the name suggests, the goal is to destroy everything you can by varying the speed, angle, and direction you toss the riders; trying to hit key structural weak points on the buildings and cause massive destruction. You’ll eventually unlock different types of balls for the riders that’ll have different effects to your shot. Things like splitting the shot into three and a more aggressive after touch are just an example. Of all the three career paths, this is the one I had the most fun with; trying to aim the shots to get as big of a score as possible and watching everything just tumble and crash was satisfying.

The last of the bunch I had the least fun with. It’s all about building coasters, with each level giving you a semi-complete track to finish. Using limited resources, you’ll need to create a section of the coaster as exciting as you can while keeping your riders satisfied. Your score is measured in “screams per second,” which calculates your riders screams, intensity, and nausea. I’m sure for the creative types this will be a more entertaining option but for me, it became frustrating trying to keep everyone in their cars while making cool looking twists and turns. This one overall is a pass for me.

But you must be thinking to yourself that these are the same people who brought us Roller Coaster Tycoon and Zoo Tycoon. Wouldn’t the main focus be the creating of your own far out crazy coaster? Of course! And boy are the tools ever in depth to create your own crazy attraction. There are a tons of pieces you’ll unlock throughout the career progression that you can use to create your own rides. From track pieces, to building objects, you’ll be able to create some insane stuff. Just one look in the user created rides and you can see some of the quality attractions. There was a Loch Ness Monster with a coaster circling it’s neck, designs for fan favorite websites, and even a giant PS4 for you to destroy. This is not to say that it’ll be a walk in the park to create something, I left from the editor confused most of the time and just overwhelmed. Again, this is probably not the mode for me so I won’t comment negatively on it, but one thing that seemed like an oversight here was not being able to just watch people ride your coaster.

In the editor you have a whole checklist of things you must complete before your can share your created level. The very first thing you must choose is the type of ride it will be: Destruction, Scream Ride, or your own Engineering level. That’s all fine and dandy if I want to make a level like those but if I want to just build something wacky and outrageous to see the AI coaster roll on, it’s not simple. Basically what I had to do is create a fully completed engineering level then just do test runs. It’s a backwards way of just doing something fun but hey, at least I got it to work the way I wanted. Speaking of the checklist, you’ll be able to set where your track will be located from the worlds you have unlocked and even create your own challenges for other players to complete. If you’re looking to just spend a few hours seeing what people have made, the challenges will definitely keep you coming back for high scores and sticking around longer. 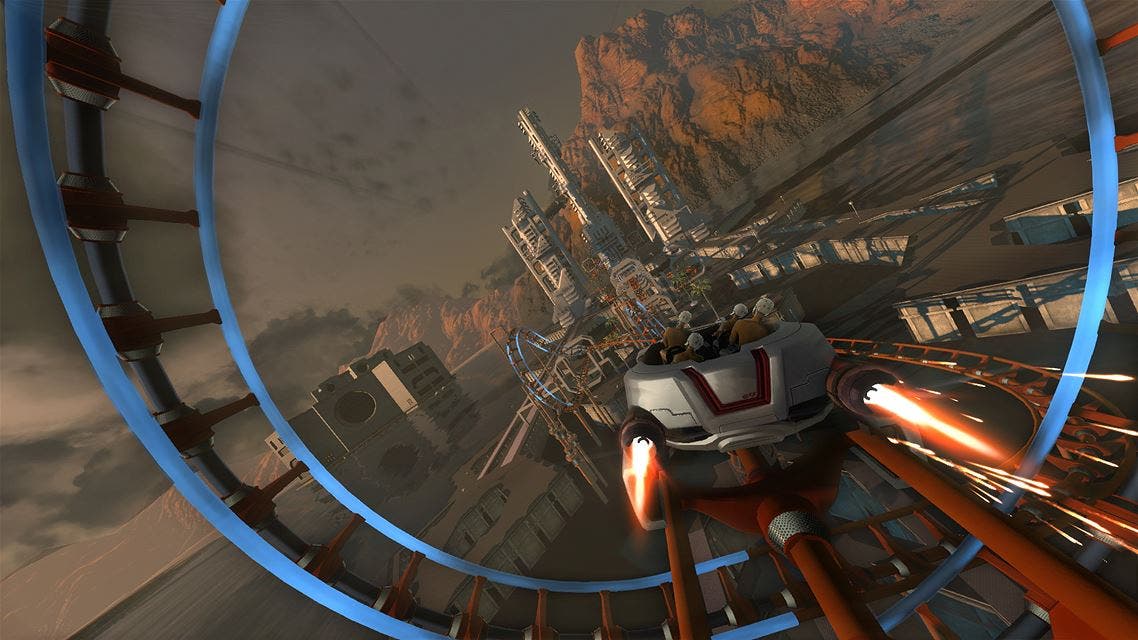 ScreamRide is a lot of fun, there will be something for any type of player to find here. With the quick reloads, retrying for high scores becomes fun and addicting in a way games like Flappy Bird and the aforementioned Angry Birds have achieved. Then there’s the near endless construction in the sandbox, players will be able to create anything their minds can dream up. The game is robust and the game is enjoyable.

A review code was provided by Xbox for review purposes