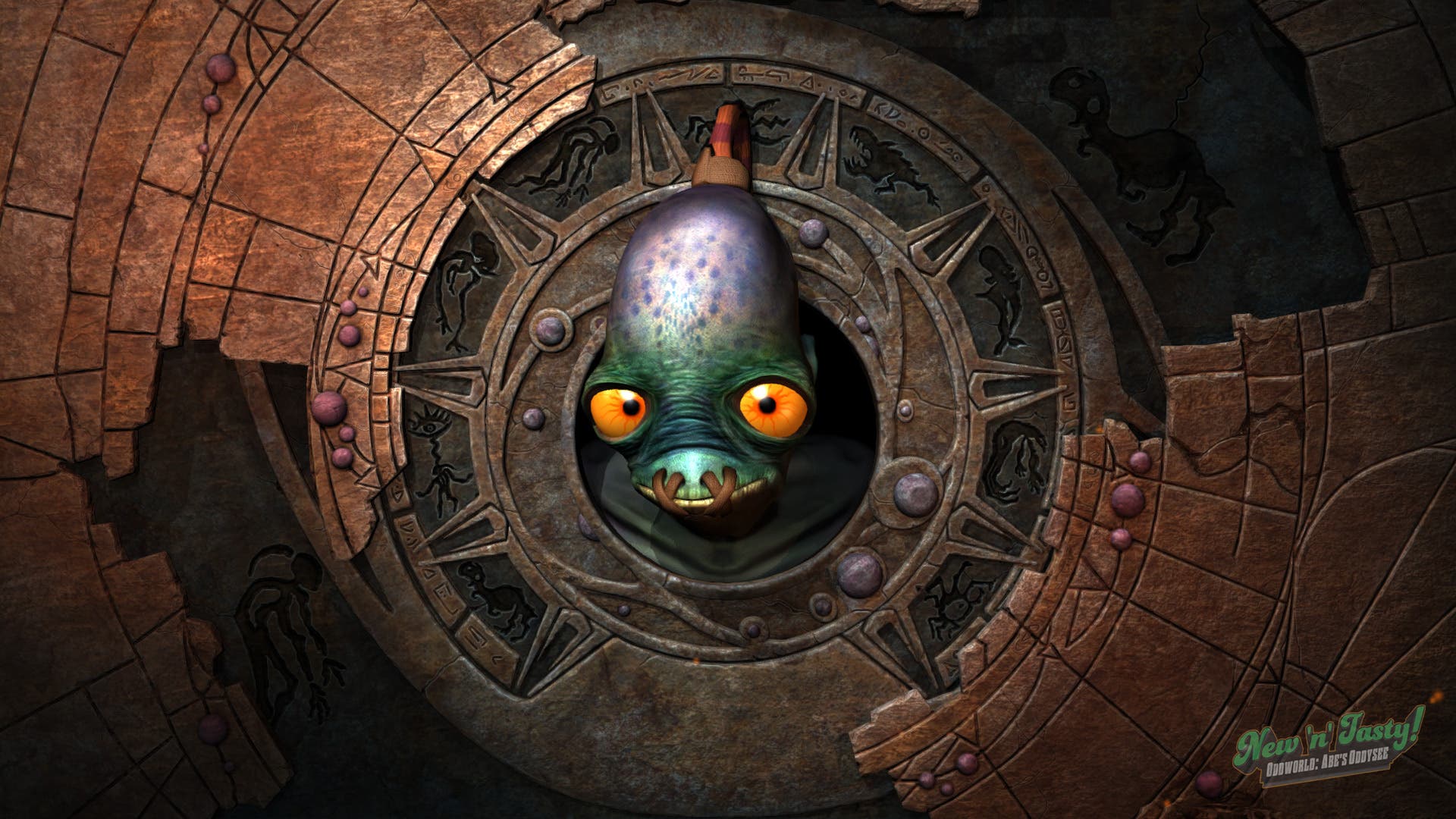 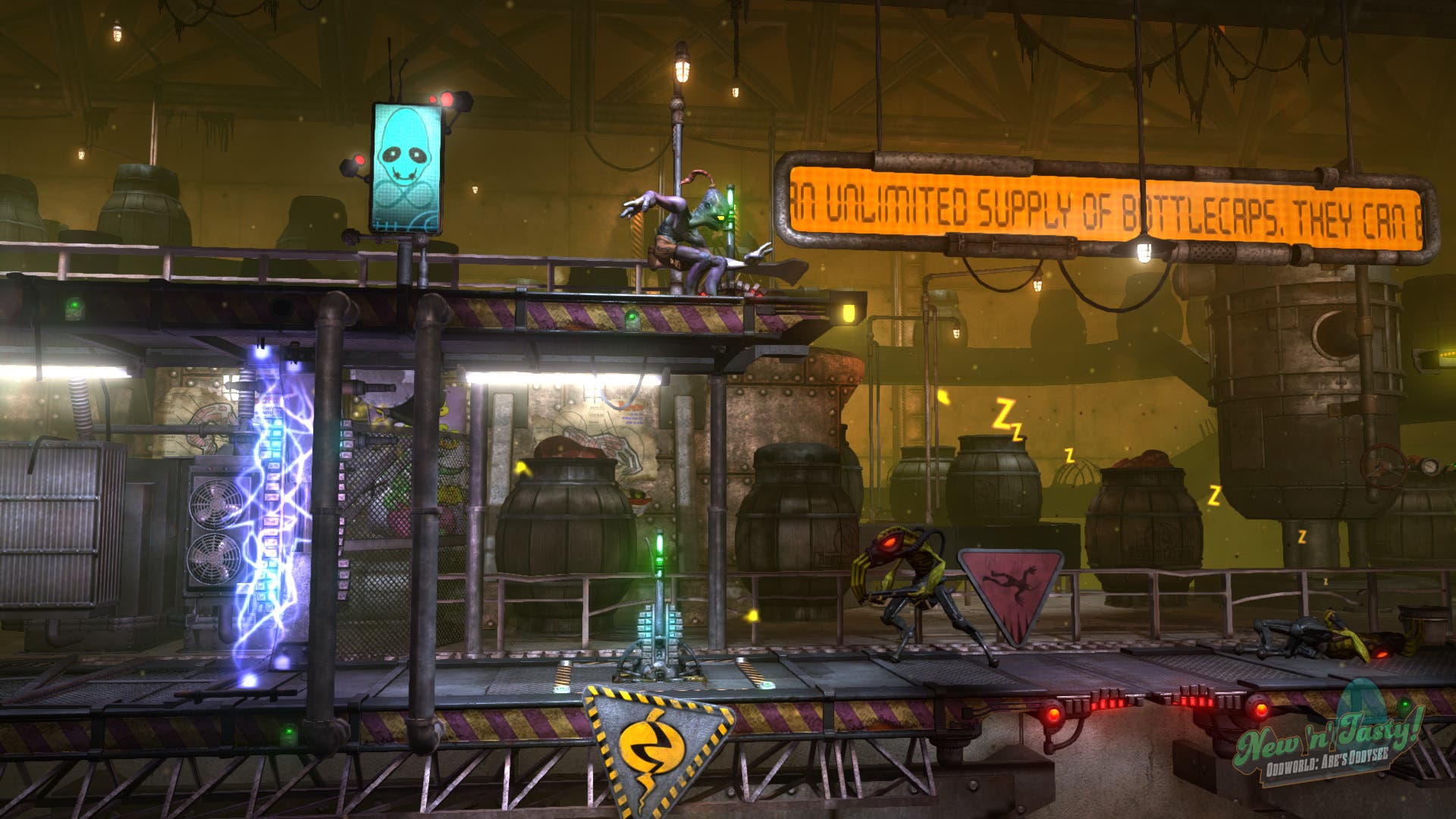 The “New” in the game’s title means that the game is running on a new engine, Unity. Built from the ground up and it mimic’s the look and style of the original in gorgeous ways. And the “Tasty” possibly refers to the fact that the slave workers in Rupture Farms, the mudokons are now being used as a food supplement, having replaced Meech Munchies due to extinction. Abe now must find a way out, and try to save as many as his fellow mudokons as possible – which is now a hefty 299 to save, that’s about 200 more than the original as I recall.

As you learn (or re-learn) the systems, there was an early moment where I earned an achievement by accidentally  killing a mudokon by releasing a platform he was standing on. An early and important tip, is to hide in steam vents which are technically along the same plane as enemies, but here they are able to get right past, unknowing of your presence. The way teaches you things by scrolling text within the factory is a neat touch for that “it’s a tutorial, but not really a tutorial” feeling. 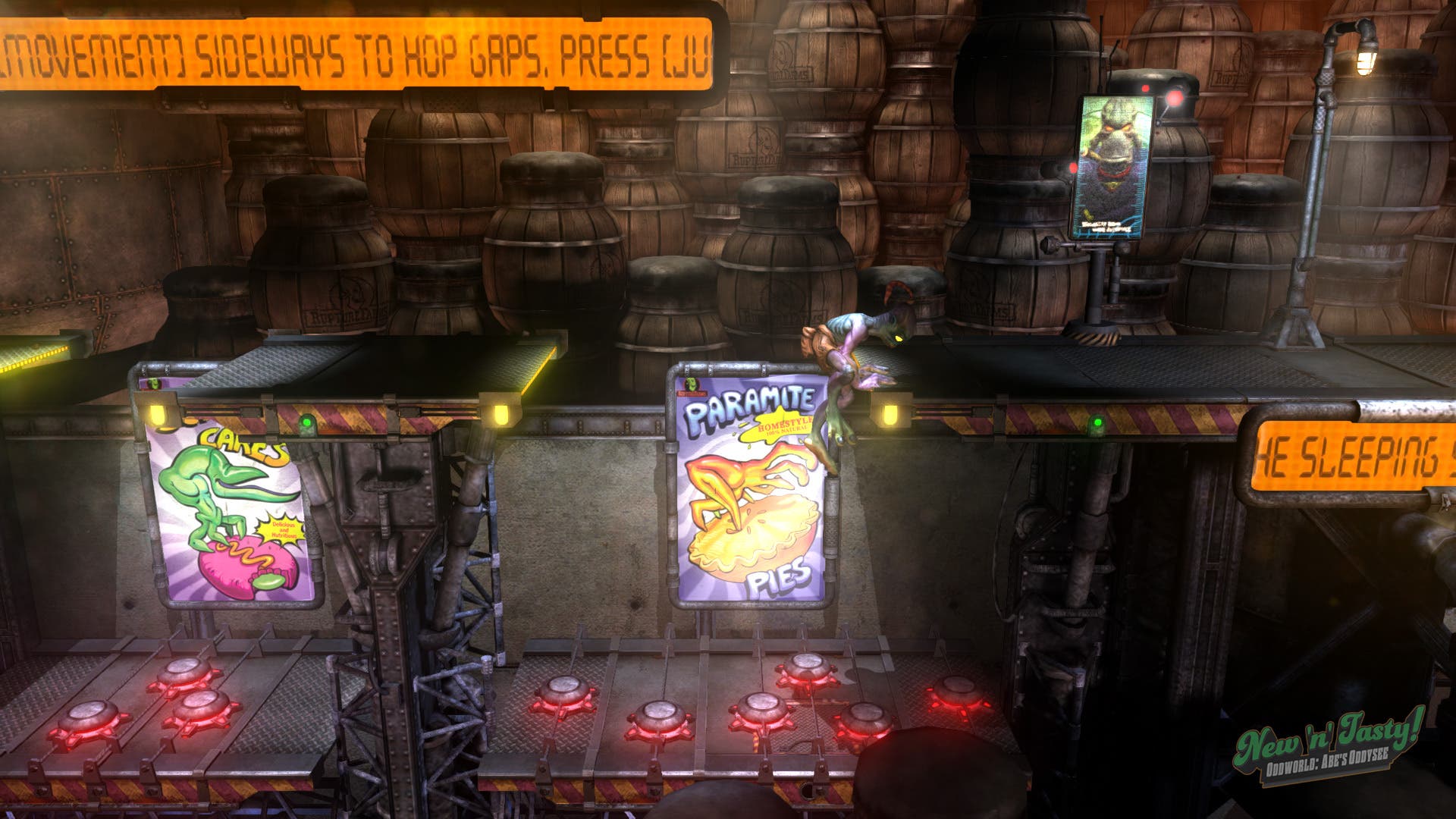 Abe has no offensive capabilities other than to use the environment against his enemies. Abe can use distractions such as throwing rocks to lure enemies into traps or slip by unseen as they investigate the noise. Abe can also throw rocks onto nearby mines to explode those willing to him harm.

Solving puzzles or performing precise platforming moves requires careful observation of threats to Abe’s mortality, and is all about learning patterns and how best to overcome them. Puzzles for completion are difficult as they were, often with multiple ways to finish them. But this being a remastered version of a game from fifteen years ago, finding your way through the game can easily be found online should you get that stuck. 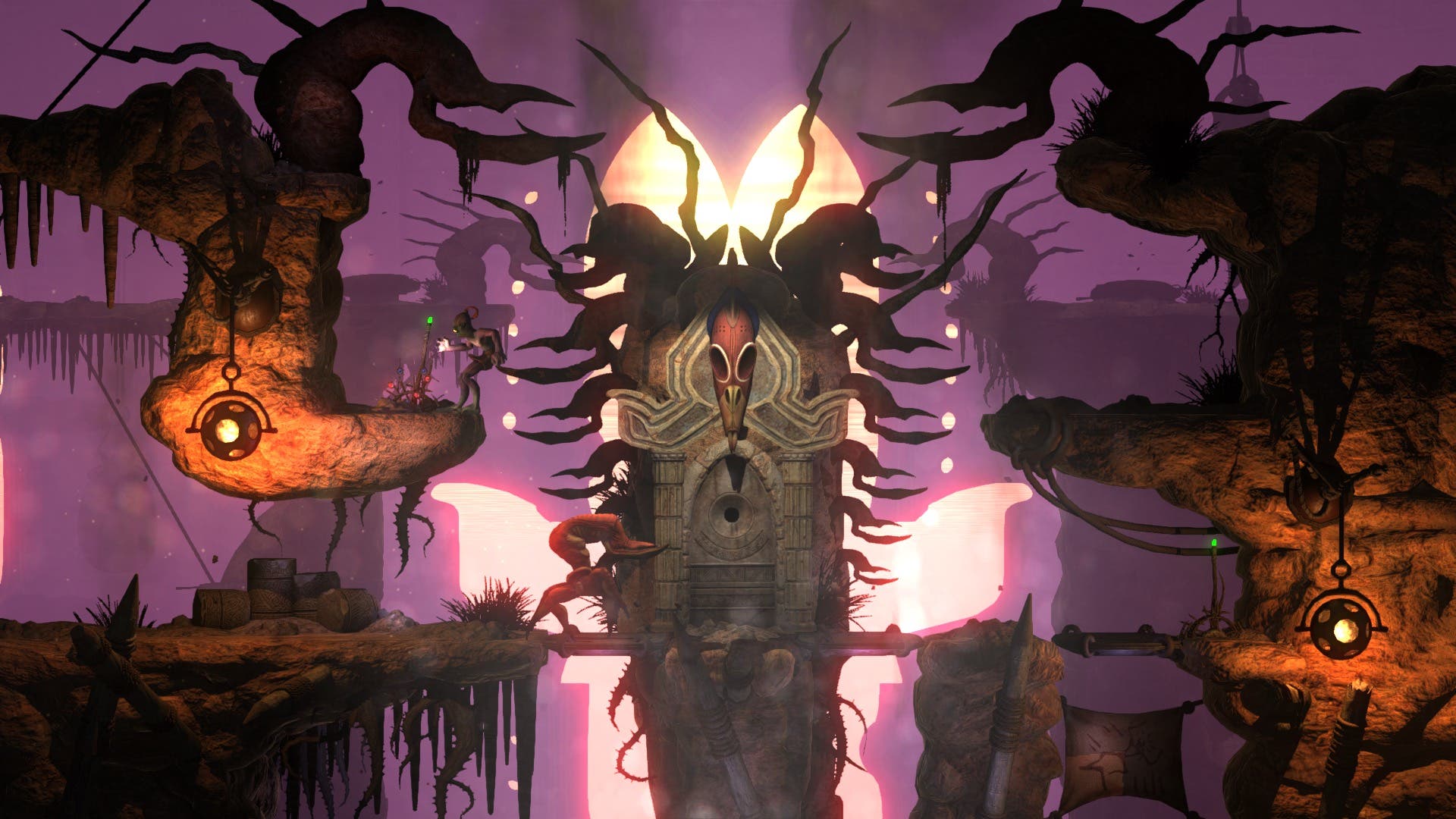 Abe’s Odyssey is a sidescrolling adventure, but while the movement is stiff, the overall animations are much more fluid in and around the environment. Platforming requires exactitude and precision. You can choose to play on Easy, Medium, or Hard with Hard being the recommended difficulty. That said, the ability to quicksave and quickload is HUGE. Quicksave yourself stuck? Reloading a checkpoint will get you to safe save state.

Communication is done in the form of “Gamespeak”. Where Abe can engage fellow workers with a “hello”, and then issue “follow” commands to send them through a portal to safety. There are alternate endings, such as a “bad ending” for not saving the threshold of mudokons, which is quite the downer to see. 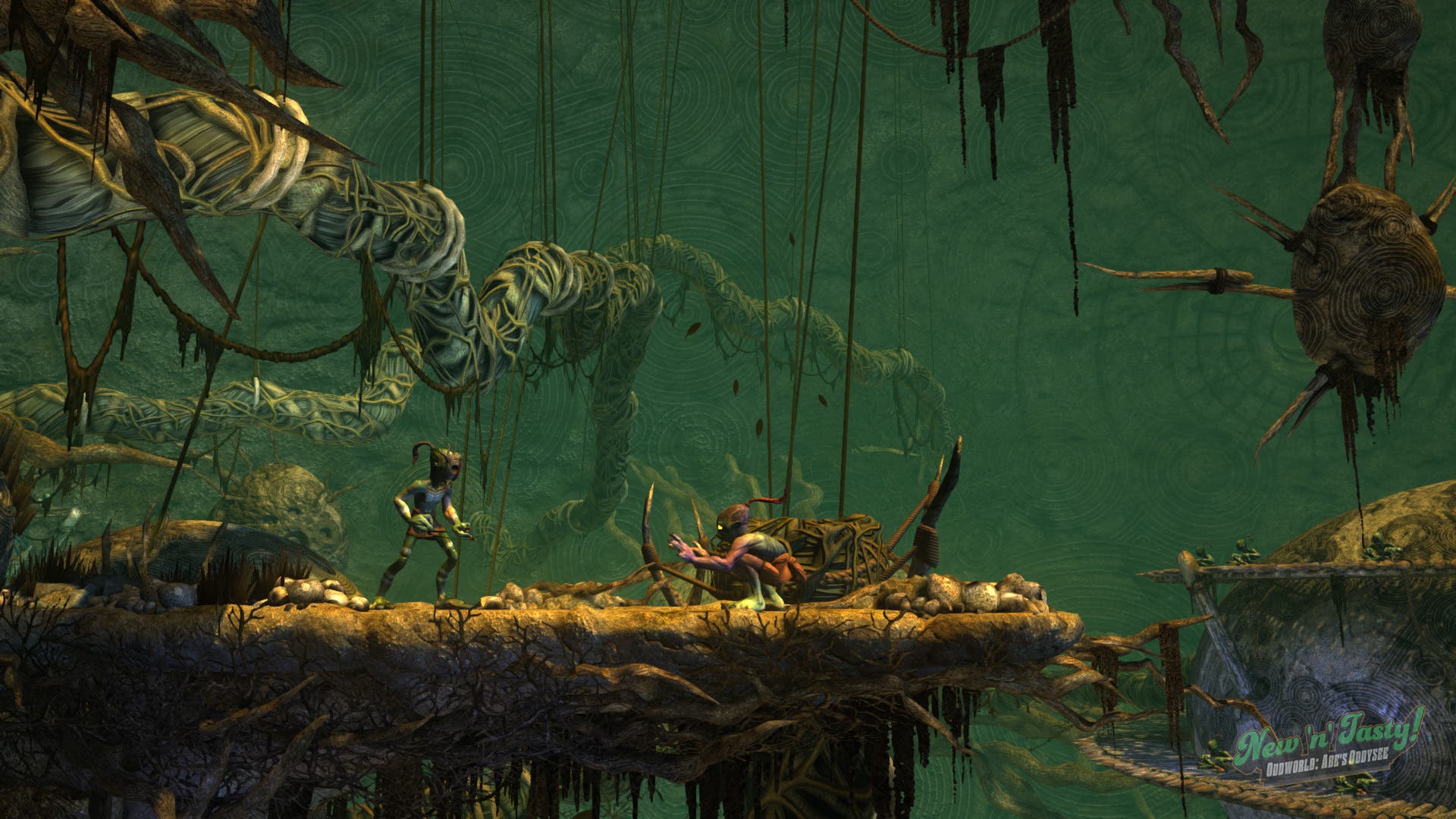 Keyboard feels most appropriate here, at least on PC. Gamepad support is present, and works pretty well. I had difficulties with using a DualShock 4, but it seems that JAW is all about patching the game to be the best it can be. And in that time, I’ve already seen support for XInput, which has allowed to the DualShock 4 to work as intended on PC. New ‘n’ Tasty features a cooperative mode, but it is anything but. It’s simply a “pass-the-controller” mode, and nothing more. It’s not really what anyone would consider “cooperative”.

The game’s visuals are absolutely gorgeous. Camera shifts are added to show the beautiful world and what the Unity engine has to offer in terms of something new, but the game is how you remember it being from memory. There’s no classic/remastered version to switch back to like Halo Anniversary or the recently released Grim Fandango Remastered to really see how things were. It would have been a neat effect, but not trying to reference how it used to be is New ‘n’ Tasty‘s best asset. It’s a recreation that stands on its own. 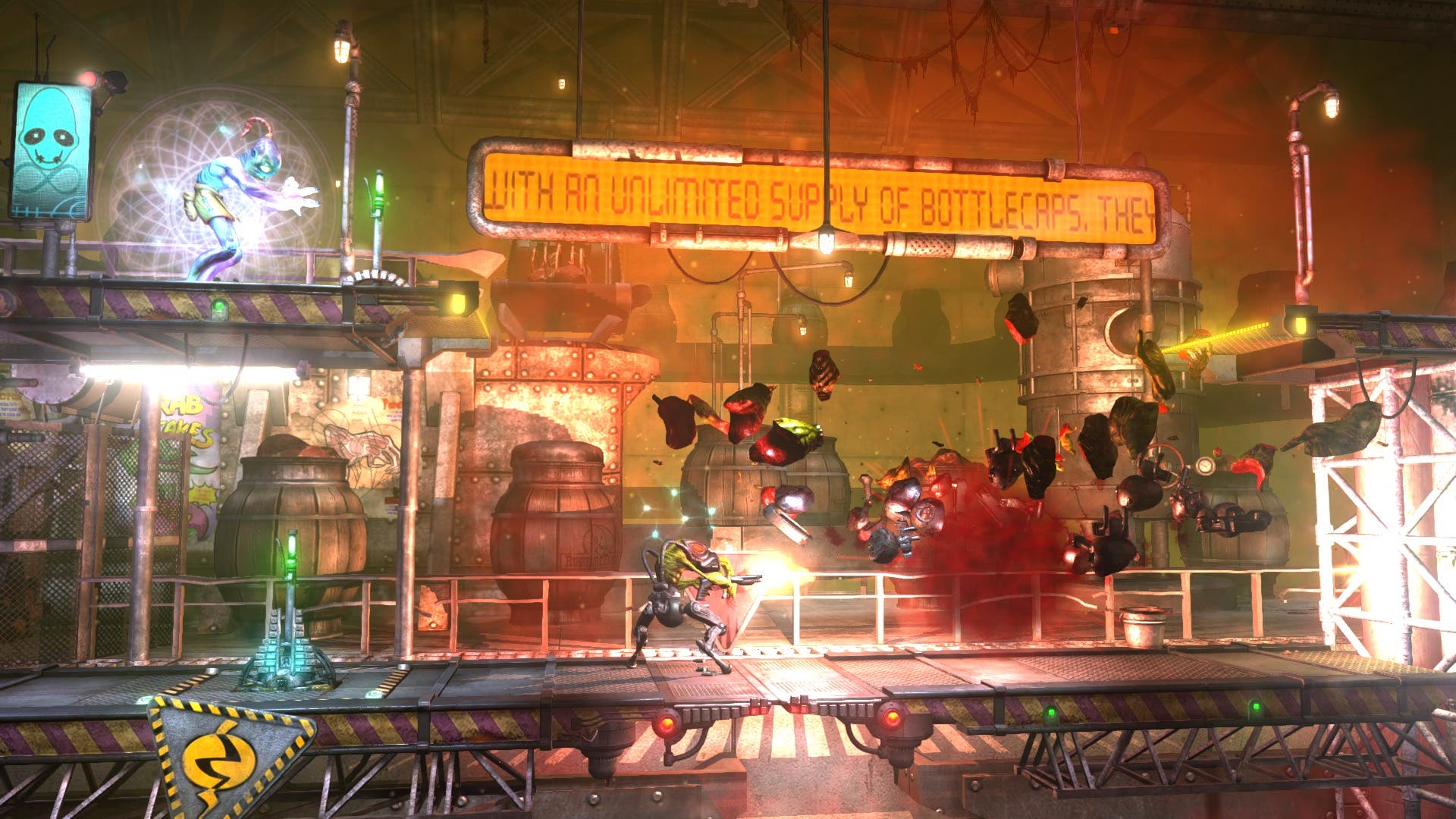 Oddworld: New ‘n’ Tasty adds a lot of modern conveniences and updates to make it one of the best remasters ever seen, both visually and in terms of quality. I’d definitely like to see the games in-between Abe’s Odyssey and Stranger’s Wrath finally receive this treatment as well. They don’t make them like they used to, and in the case of Oddworld: New ‘n’ Tasty, is a shame, because I’m hungry for more.

A Steam code was provided by Oddworld Inhabitants for review purposes