Strike Vector EX coming to PS4 and Xbox One this summer

Indie game studio RageQuit Corporation announced today it aims to light up the friendly skies with the fully-loaded aerial-combat game Strike Vector EX on PlayStation 4, and Xbox One via the ID@Xbox self-publishing program, later this year.

First introduced on Steam PC in 2014 as a multiplayer-only game, the revamped console version completes the studio’s vision by creating refined controls that enable players to maneuver their mech-craft like a pro to complement the dangerously-quick multiplayer dogfights that caught critics’ attention in its debut.

RageQuit Corporation’s debut Xbox One and PS4™ game has been fine tuned to provide instant feedback and tight console controls for players to light each other up amidst futuristic, industrial structures. Players gear up their ships to deploy specific strategies for each mission (paired with personal, bada$$ styles) to engage in frenetic multiplayer skirmishes. 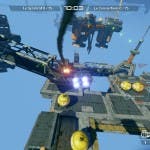 Strike Vector EX uses the Unreal Engine 4 and is slated for takeoff on PS4™ and Xbox One in summer 2015.