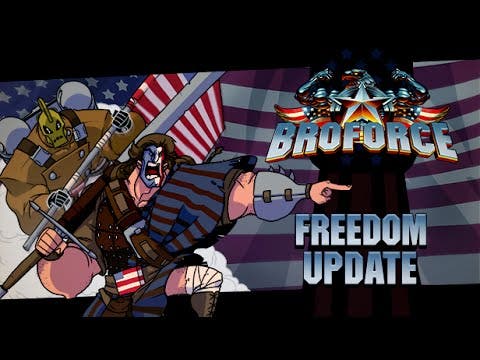 As Americans all around the world celebrate their freedom, developer Free Lives and the noted liberators at Devolver Digital have dropped the mother of all Broforce updates in celebration of the Fourth of July. The latest expansion delivers two new ultra patriotic bros, new democracy-spreading melee attacks, and the ultimate expression of the United States military might  combat flexing!

Joining the bros in their fight against rampant un-Americanism are the Brocketeer, a jet-packed hero from the golden age of bros with a devastating dive bomb move, and Broheart, the Scottish-American hero of legend whose FREEDOM yell strikes fear in the heart of all that stand in his way.

Broforces latest update also includes some devastating additions to the bros arsenal with new melee attacks. Dispense liberty for all with a well placed roundhouse kick or organ punch and let freedom ring with the visually impressive and always lethal chainsaw to the face.

No assault on terror would be complete without an impressive display of the bros raw power so Free Lives has introduced a new flexing feature. Now you and your bros can cease-fire, flex your biceps in the face of evil, and exercise your right to bear arms so thick your shirts tear in half.

“On behalf of the American people and those that cherish freedom, I would like to thank the lone indie developer that created Broforce,” said United States President Barack Obama. “Not since Benjamin Franklin invented fully-loaded nachos has one American done so much for the world.

Broforce is available now via Steam Early Access and is 33% off in America and Not America over the Fourth of July Weekend in celebration of freedom, liberty and the pursuit of a large Steam library (http://store.steampowered.com/app/274190/).