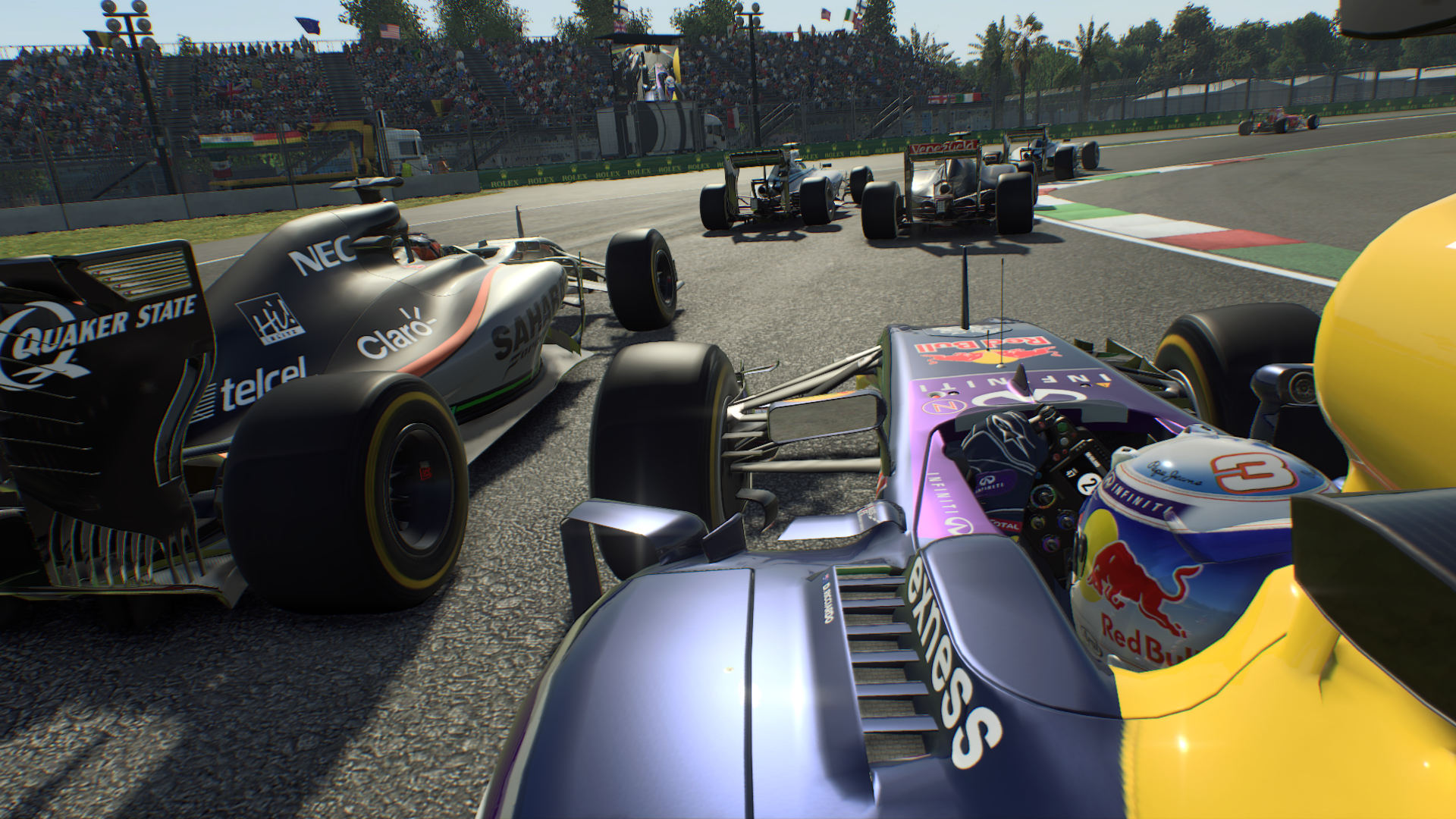 F1 2015 is two sides of the same coin. It is equal parts the best Formula One game to date by longtime developer, Codemasters. It is then also the weakest F1 game in terms of features and modes. If you haven’t seen previous F1 games and are on a new console, you’re likely not to notice the gaps. This is otherwise the best use of the F1 license, likenesses, locations, and experience of F1 racing you’ll find. This is the debut of the F1 series on a new generation of consoles, specifically for the PlayStation 4 and Xbox One. The PC has seen many iterations, going back to 2010. Oddly enough, the game does absolutely nothing to teach you about the basics, or even how DRS and KERS works. The game just assumes you know Formula 1 racing and the systems. At least F1 2014 had some semblance of a training mode, but nothing like that is found anywhere here. If you’re a newcomer to the series, you’re left to figure it out all on your own through playing or reading wiki’s.

Upon starting the game, you are incessantly asked if you want to play the 2014 or 2015 season. In theory, this is nice because you will have two seasons to play through, but there are two different menus to navigate. There’s a possible chance that when trying to race online, you won’t find each other due to the different decisions taken at startup. With every year in Formula One and Codemaster’s F1 series, comes changes. For instance, Honda is back, and the German Grand Prix track is in 2014 season, but not 2015. The track can’t be loaded from Quick Race if you chose 2015 either. Certainly there’s a better way to do this, but Codemasters didn’t implement it. Thankfully, with the game being out earlier in the race season, there will be game updates that reflect what’s going on. While you can’t work your way up and be yourself through the career mode, you can join any of the F1 teams like Lotus, Marussia, Red Bull, and more and pick a driver from the team and bring them to victory. This is how the Championship Season works. You can do the same thing in Pro Championship, but it is the real deal: no assists, full damage, and full races to test your mettle. The selection here just seems to be a way to add an extra item on the menu selection to seem more robust than it is.

The track selection is, splintered between the 2014 and 2015 seasons, but feature some impressive looking locales at all times of day (pre-determined) and weather (dynamic or set by you). Learning the tracks is a very important part to these games, and the time trials are the best way to go about doing that. In an unexpected audio improvement, is that of the radio chatter. Now, it is much more informative of telling you what’s going on around the track. This is hugely improved over prior versions. The radio can be used by you as well, allowing you to ask your engineer questions and get feedback. But given the button’s location and all of the things you have to keep a track of, using this feature is highly stressful while racing.

There’s a few things F1 2015 has, but let’s talk about what it doesn’t have. Firstly, there’s no safety car, not even the virtual one that the 2015 season is using. One of my favorite features was the online co-op, which has been stripped out. Then there’s the lack of split-screen, which isn’t a huge loss, but one nonetheless. And the most heartless of removals, not being able to do a career mode as yourself.

The TV-style presentation with narration by F1 commentators David Croft and Anthony Davidson give the game a lot of personality that it has been lacking in recent years. This, accompanied by more accurate camera angles for both racing and in replays, adds to the authenticity.

You can use the d-pad to adjust tires and braking on-the-fly, usually at the guidance of your engineer. Being able to do this really is something you get instantaneous feedback on. Crashes will get you feedback verbally from your engineer, but also from your car itself, breaking apart and starting to decrease in overall performance. F1 2015 is also more streamlined when it comes to loading the track. Now, you’re able to choose your settings on the way to the track. During Championships, your options are limited. But say in something like Quick Race or Time Trials, you’re able to set the weather,

While F1 2015 looks graphically superior to the previous F1 games Codemasters have created, thanks to the new game engine powering the game. Though, there’s an overall blurriness to the game that I can’t explain, and no options to turn it off to get a crisper image. The rain is something I always talk about in my reviews, and it just continues to impress and look incredible. I found that no matter if I was using my DualShock 4 (emulating an Xbox 360 controller), or my Logitech MOMO Racing Wheel, the configurations are infuriating to get them to work the way you want them to. Compared to Codemasters’ own GRID Autosport or Slightly Mad Studios’ Project CARS which automatically recognizes and maps these devices, I had to spend a lot of time in getting the controllers to be recognized and used properly.

The multiplayer, is a bit broken. Not only was it hard to find a race, but now they feature hoppers, or playlists now. While this might be an easier way of getting the right type of racers together over a hodge podge of preferences, I felt it wasn’t the right way to go. Though thankfully you can still create custom events, at least. If you have the means, F1 2013 is still the definitive game to play. That is not to discredit F1 2015, it’s a very fine simulation that uses the Formula 1 license very well while maintaining accuracy and realism to great detail. It’s just unfortunate that it lacks many of the modes and features we’ve been used to over past iterations. I have to say for a second year in a row that perhaps next year’s release is when we see modes and features start to bulk up the game. Still, F1 2015 is the best the series has felt in terms of core racing, and you should get it when it comes down in price.