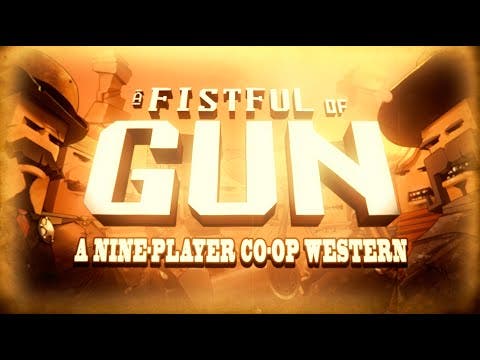 A Fistful of Gun rounds up a September 24th release

Lawless developer Farmergnome and misfit publisher Devolver Digital have announced that nine-player co-op western A Fistful of Gun is set to launch on PC via Steam, GOG, and Humble on September 24 [fistfulofgun.com]. Gamers that are quick on the draw can pre-order A Fistful of Gun now and save 25% off a single $12.99 shot, the $39.99 four-pack, or the fancy pants $84.99 nine-pack so you can deck out your entire posse.

Originally roaming the open range of the internet as a freeware project, A Fistful of Gun has sauntered back into town as an epic tale of vengeance set against a brilliantly colorful American frontier full of dangerous cutthroats. Select one of 11 unique playable gunslingers and seek revenge as a lone wolf or with up to eight other bandits in local and online co-op. Master the specialized controls of each character, collect gold from fallen foes to purchase upgrades, and imbibe a bit of liquid courage and unleash a tornado of lead across the dusty plains.

Im not legally allowed to promote a drinking game that involves a shot of tequila each time another player gets the drunk power-up during A Fistful of Gun co-op games but that would be pretty solid, said Devolver Digital CFO Fork Parker.