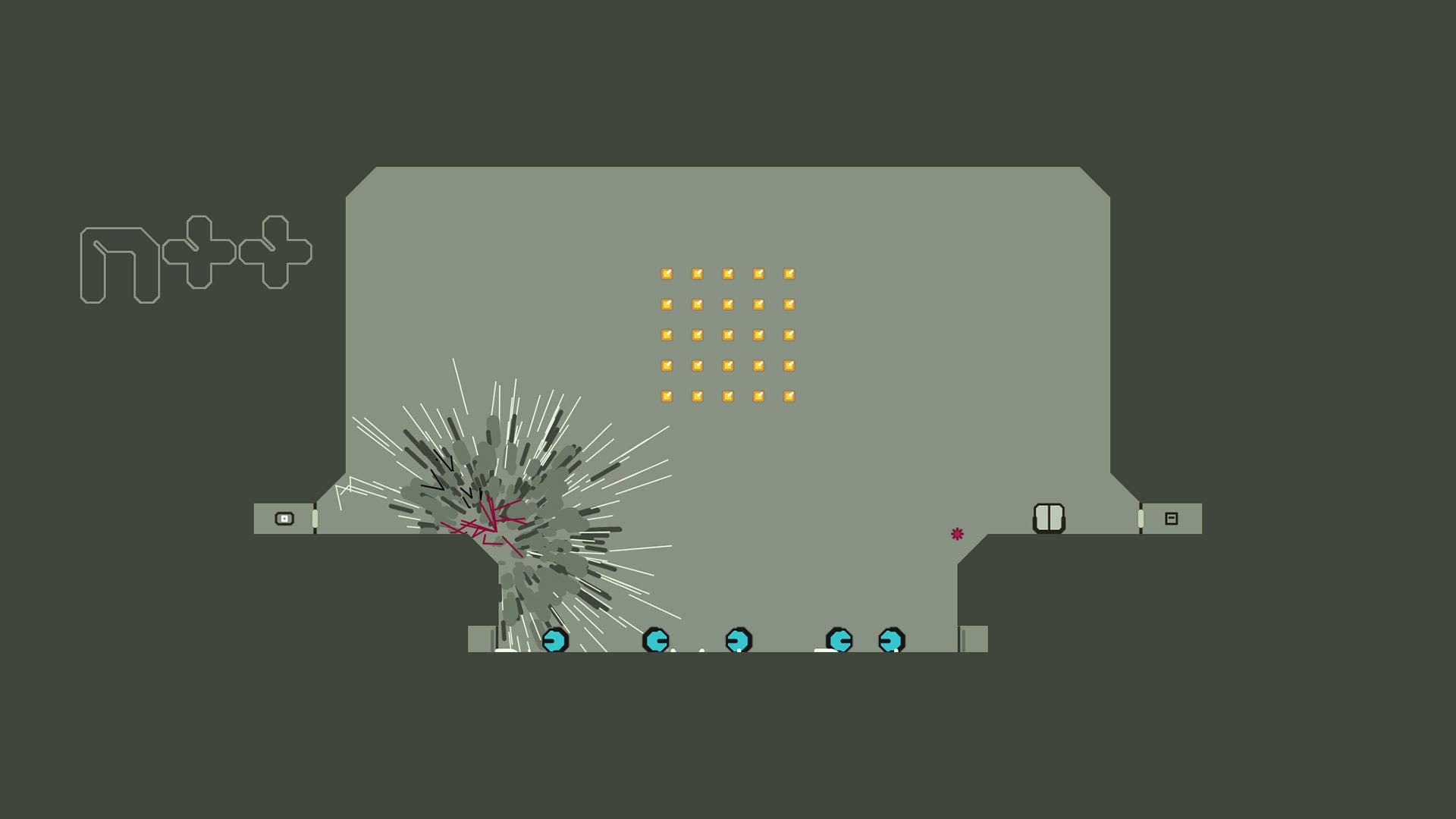 N++ has one of the slowest ramping up phases I’ve seen in a game, and I’m so grateful for that. You could entirely bypass the tutorial, but you’d be in for some hard times trying to pick up on everything that it starts to throw at you once the gloves are off. This is a game where you have to learn everything up front before you can tackle anything complex.

The controls of N++ are very simple. You either use the analog stick, or the D-pad to move the ninja. Movement feels better with the d-pad over analog stick. Then there’s the all-important jump button. A quick tap will do a short jump, or holding the button will be a long jump. There’s more to it than that, you can wall jump and slide down surfaces. The movement of the ninja itself is all inertia based, once you get moving, you gain speed and that speed can propel your jumps even further. Playing a level is not just about getting to the end, but grabbing all of the gold, and to the exit. Obtaining that gold gets more complex once jump pads and accelerator pads get involved. A number of enemies will litter a level like: mines, machine guns, lasers, heat seeking missiles, and even evil clones all get in the way of not only completing a level, but from getting all the gold.

The exit must be opened by hitting a switch or acquiring a certain or all pieces of gold. To further complicate things, there’s a time limit, which is actually of little consequence. Collecting gold does add time, and often you’ll have more than enough. Completing a level is all there is. The time in which you do it doesn’t matter, you won’t earn a gold, silver, or bronze. A gold icon appears on levels where you’ve snatched it all from. The aesthetic is somewhat of an abstract retro minimalism that works really well. These cold, sterile places that this ninja is stealing from, is nothing recognizable. Many color schemes unlock throughout play, can be changed at will or have them rotate. I found the default to be the easiest on the eyes over time, some are a bit obnoxious.

Death is frequent, but it is so quick to hop back in and start over. Every death is yours to claim, and not that of the controls or the game. It tends not to be so frustrating, because the game just say “Oops”. Like, okay, it’s not so bad. It’s a game that doesn’t insult you for being bad (except for the trophy that pops for dying the first time).

Leaderboard competitions are at every corner, comparing you against your friends and the world with each set of levels completed. With over 1500 levels to play across solo, co-op, and race, there’s so much to do and see. You can create your own levels, or play levels created by others. The life of this game has no end.

The inclusion of local co-op is a nice touch, with up to 4 players that can play the co-op levels, and even do races. Especially the co-op levels, they are strictly designed for multiplayer, as it will require a player or two to sacrifice themselves for the other to finish the level. This creates a very unique approach to co-op that I’ve never seen before. It’s so smartly designed. N++ is a pleasurable experience to play, even when the going gets tough. It never gets frustrating, you always want to do your best, and do better than your friends. N++ is a shining example of platforming with style and challenge done right. It’s also so packed with content from the moment you start it, but the player-created levels make it the only one you’ll ever need.