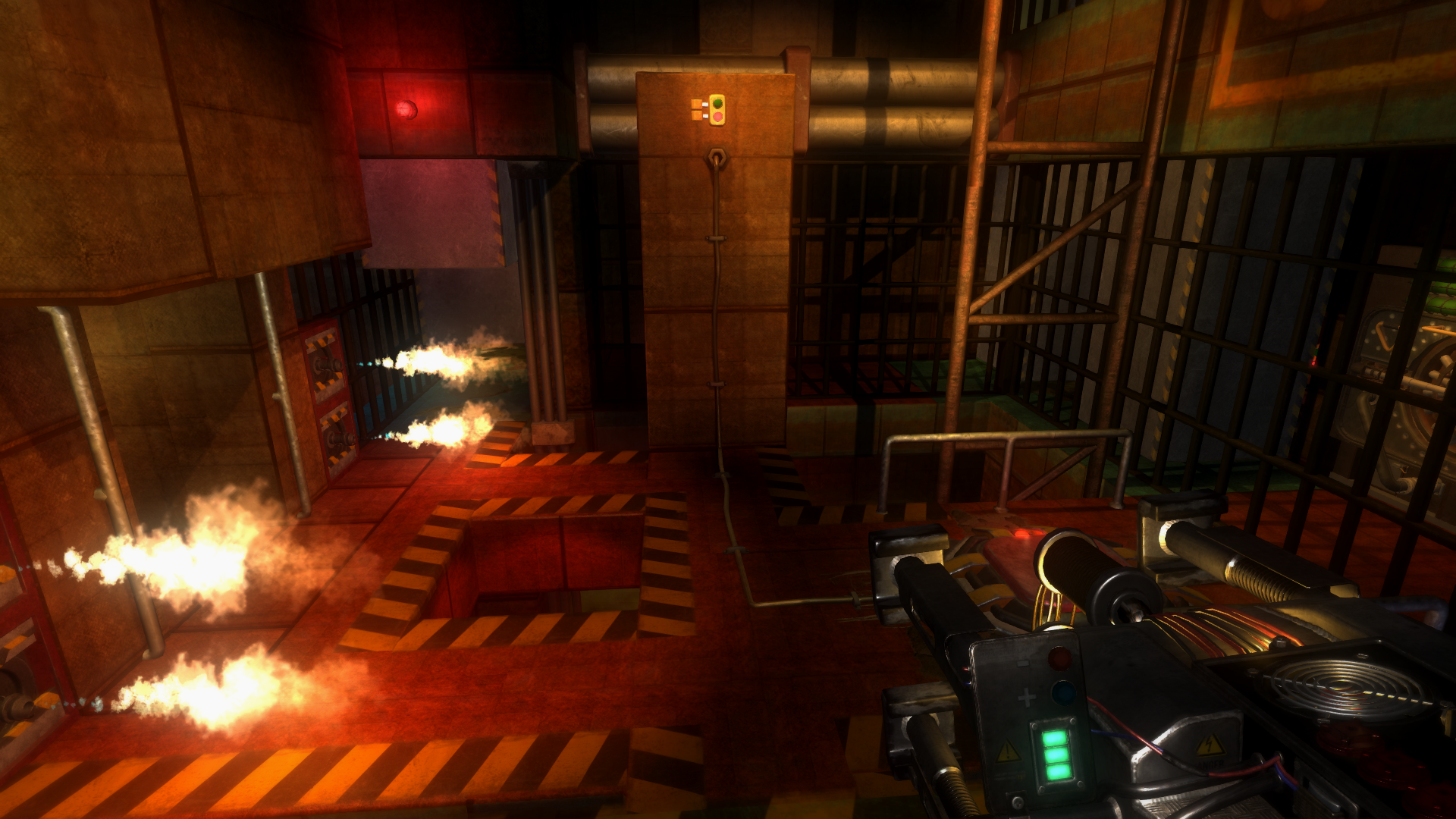 Portal was a game that fundamentally changed the FPS genre into a space where your mind become a more powerful tool then your bullets. Of course with the critical success of such a new idea, many games have followed suit with new ideas and takes on mind bending puzzles. What if a game took those fundamental ideas and core concepts, threw in a little bit of Saw and Cube movie flavor? This is Magnetic in a nutshell… or metal shell as I should say. Players take the role of a prisoner who has been taken and entrapped for the purpose of a game. Outcasted by society for crimes they committed, there are two choices, play the game or die. Stuck in a metal cube containment with a magnet gun, devious traps, choices to make, and puzzles to solve, players will find a very dark experience wrapped with the intent of killing the player. Can this death trap be completed and will players make it out of the cube alive and with sanity intact? Anyone that has played games in the FPS puzzle genre will be right at home. Magnetic gives players a gun (that looks like it was built from a PC fan) that can push and pull metal boxes, platforms, and hit switches with. The idea of magnetics being a driving force for the game and its platforming is interesting and makes for some mind bending puzzle solving. One particular ability is to shoot these sensors that propel the player upwards or away with the force of magnetics pushing gravity the opposite direction. Sometimes even requiring the player to look away from where they are leaping, which can be scary in and of itself. As players go through the motions of each room, loading new puzzles and new challenges like poison gas or flames shooting out of the walls, the idea that this place is trying to kill them really comes across and more so then some puzzles games. At key moments the player will be presented with choices that will affect other prisoners in the game, much like the movie Saw, player choices can have a difference in who lives and who dies. While I don’t think this effects much other than the ending, or story dialog players here, it still adds a sense of urgency and intensity that the genre normally doesn’t see.

Graphically it’s filled with many locations that look dark, metal, and very similar in nature. There is a whole lot of variety and it makes sense in the context of the game but it’s lacking. The soundtrack is appropriately moody and creepy at times and the voice over works good enough to keep players enthralled with the story that is there. Otherwise gameplay, while solid and offering plenty of interesting puzzles also comes with its down falls. Magnetic has lots of platforming that is required to progress and sometimes it just comes off feeling off. Trying to land jumps using magnetic abilities can and will lead to many deaths or restarting of a puzzle and it leads to a lot of frustration. The same can be said for trying to magnetically push blocks on switches. Players will aim, force the block away but still missing the mark even though directly points at it. Its leads to a tedium that just ruins the more interested story and pacing. Magnetic is an interesting concept that takes a lot of inspiration from other games in the genre and even some horror movies. Its fun to see how they story plays out with the prisoner and the warden who is watching your every move, but those moves are sometimes clumsily and frustrating as you repeat things over and over. There is a unique enough premise and story set up with interesting puzzles to see, but most of it comes away feeling as a “been there, done that” vibe and as such is only recommend to the most hardcore of FPS puzzle fans.