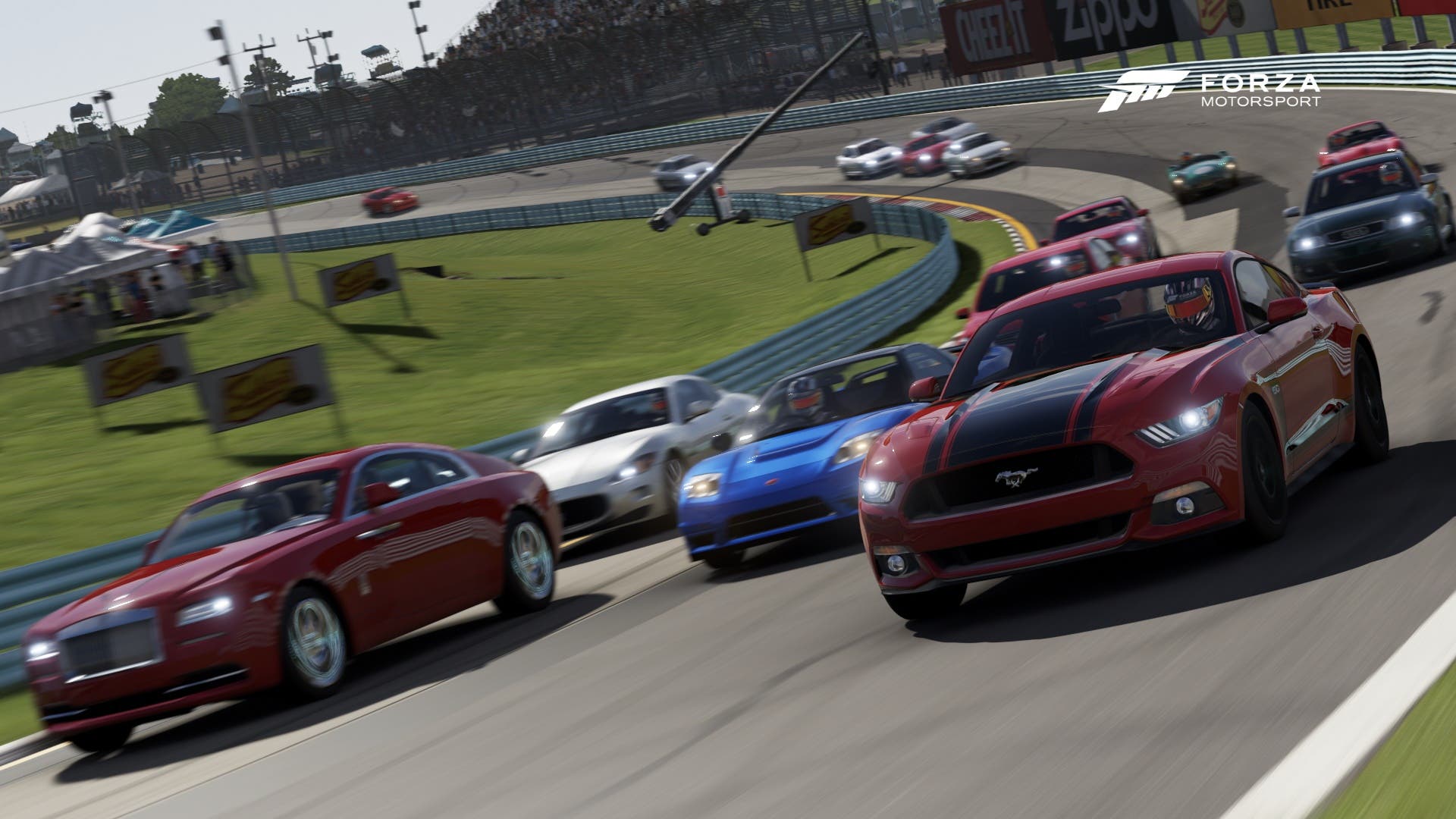 Buckle up that 5-point harness you’ve attached to the couch, you know that one your significant other yelled to you about the other day. Slip on those racing gloves you bought on a whim from the local auto parts store and confidently say “Xbox On” because Forza Motorsport 6 has arrived. Those coming off Forza Horizon 2 should not compare Forza Motorsport 6 to that, this game stands on its own as the best Motorsport title in the series

Trying to compare Motorsport to Horizon is like trying to discredit Madden for not being NFL Blitz. Both games are great at what they do, and Forza Motorsport 6 is an incredible sequel to the previous Motorsport title. Almost instantly when starting your game for the first time, those with the Forza Hub connected will receive rewards based on their previous games in older Forza Motorsport and Horizon titles. Also, if you’ve played the previous games and connected via the Forza Hub, Forza Motorsport 6 won’t hold your hand. The most they do is have you run an introductory race and then a three race qualifier. The Qualifier shows you some of the new weather features and the new Mods system, more on that later. After you complete the three races it’ll throw you into a new series to try but you can back out to the main menu and you’re given free reign. 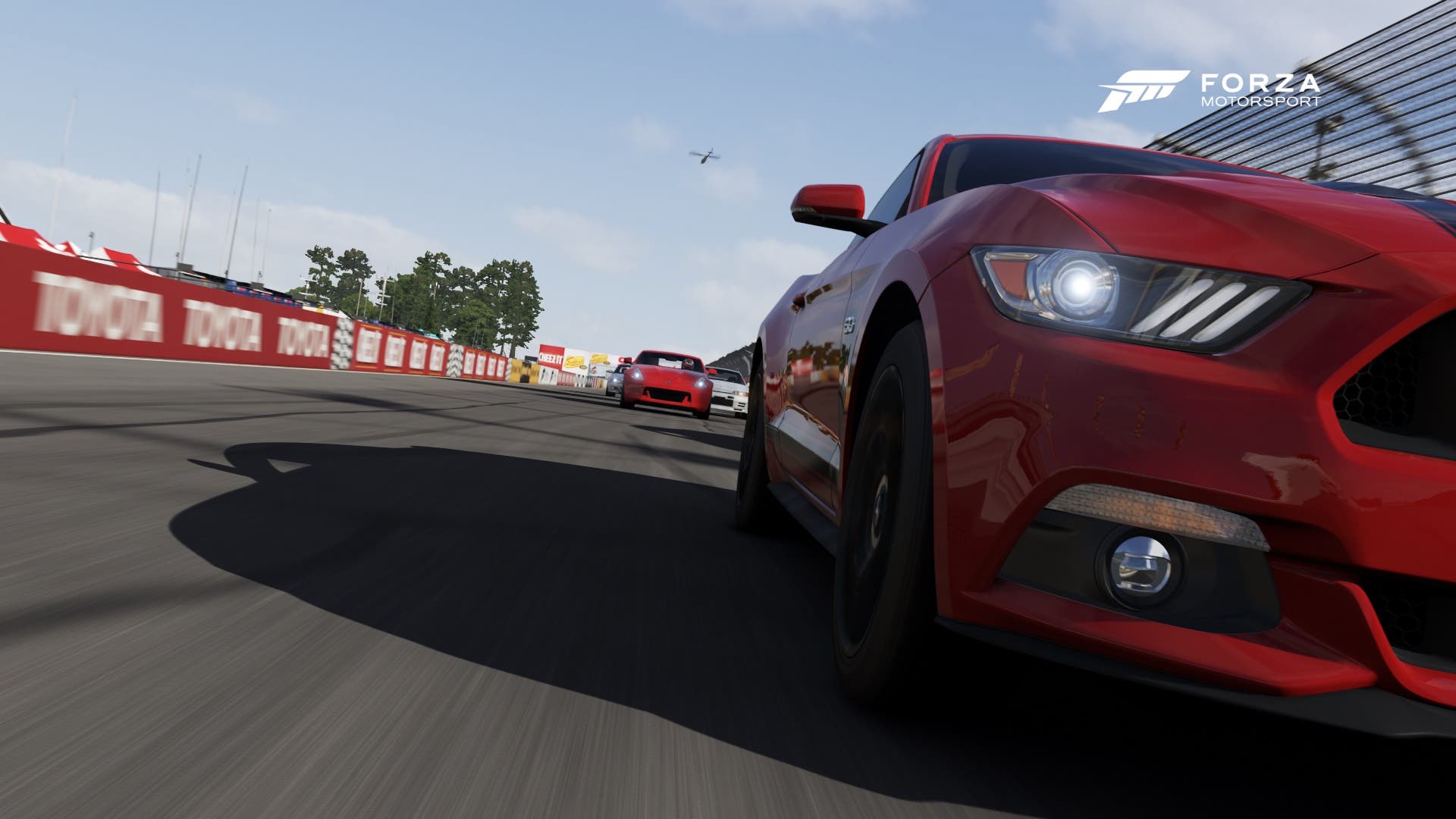 The game drives as you expect, near flawlessly. The Turn 10 Studios guys have honed their craft and it’s just as tight as ever before. Some new things to look out for now are puddles when it rains. Cars will hydroplane on wet roads and when you do hit those puddles the car will jerk in that direction just as it would if you drove your actual car over one. It’s another obstacle that you’ll need to learn to avoid making the racing that much more intense. Speaking of the rain, it’s gorgeous. Wet roads look wet and water gathers on the windshield giving your wipers a workout. It will be compared to by others so I’ll say here; the rain effects are comparable to Driveclub, not better but comparable. Since we’re here on graphics, the game is eye candy galore; cars and environments are as stunning as ever. Tracks look accurate, night tracks look great under “the lights”, cars shine then get dirtied up over time, and they even have sand that has made its way onto Laguna Seca’s course. There are over 400+ cars to choose from with the base game with more coming via car packs. What has me excited is that most of the cars included in the game have already appeared in both Motorsport 5 and Horizon 2, which means Turn 10 are more likely to included new cars that haven’t been in a Forza title before. 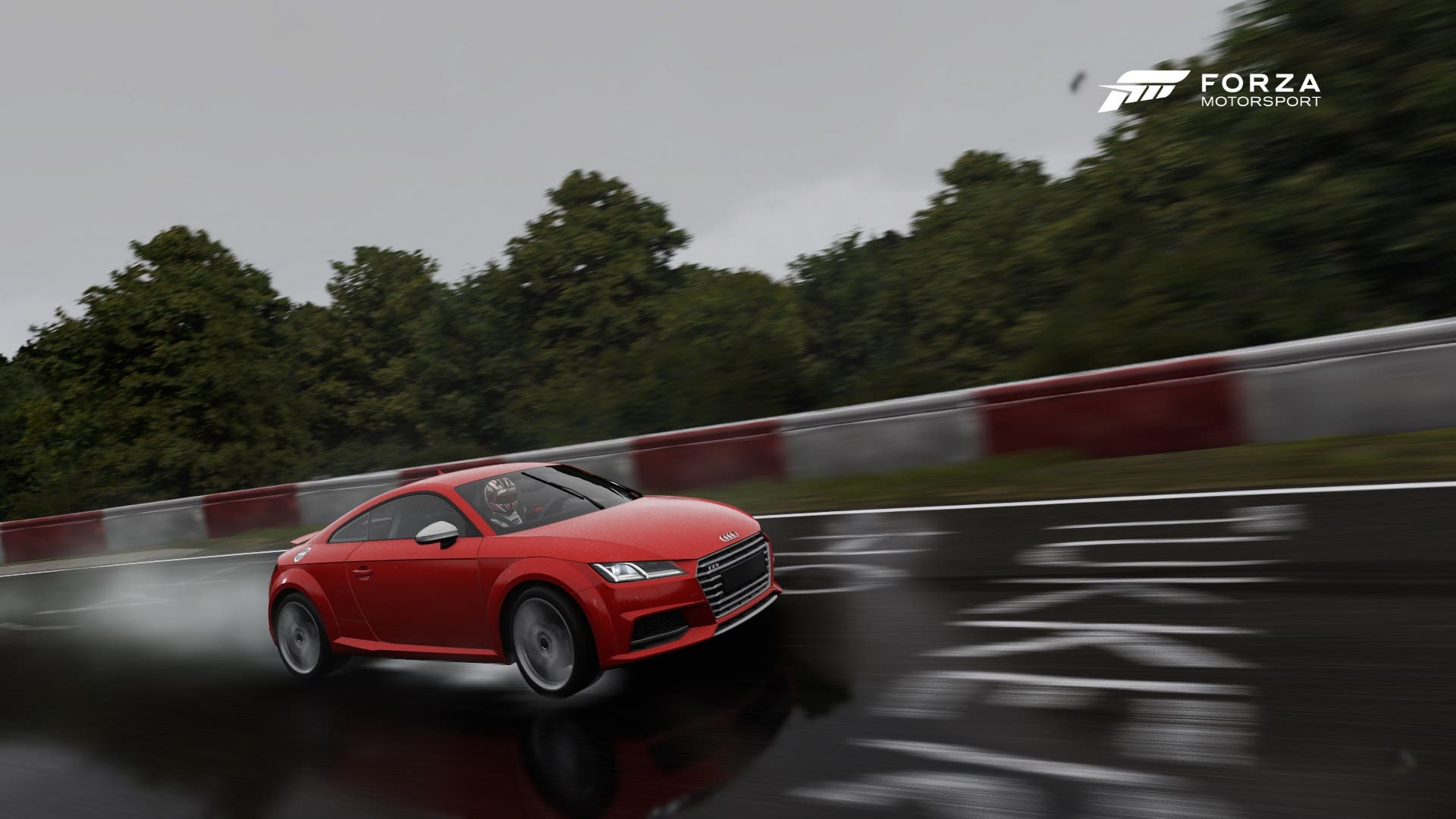 Once you get to navigate on your own, you may want to first head into the driver profile section and choose your driver gender! Now your helmeted avatar can either be Male or Female. Other than that shocker, for those of us who get into customizing our cars, designers will be glad to hear that you’re able to import your designs and vinyl groups from Forza Horizon 2 and Forza Motorsport 5. This was a feature Horizon 2 was severely lacking. Not much has changed with the paint section of Forza Motorsport but I did notice a nice addition that you can paint stock rims any color now. You can still share designs with the community and when you purchase a new car the first thing it brings up is some popular designs made by the community you can download, a feature that was in both Horizon 2 and Motorsport 5. I made a few designs and imported a few so feel free to look for them under “Nuts4Ford”.

Some other neat little tidbits you’ll find throughout the game are the voice overs this year. You’ll hear the famous voices of James May and Richard Hammond, formerly of Top Gear, and various drivers and stars from several disciplines of racing. You’ll encounter most of these voices during the new showcase events which Motorsport has borrowed from Horizon. Now these showcase events aren’t as “out there” like they are in Horizon, I mean you won’t be racing a hot air balloon around Nürburgring. These are events that will place you into famous racing type situations. The first one they put you in is taking an Indy Car around a few laps of the Brickyard, the famous Indianapolis Motor Speedway. Along with the showcases, Motorsport borrows the wheel spins from Horizon, every time you level up in Motorsport a grid pop up with 9 different options for a prize you’ll win at random. 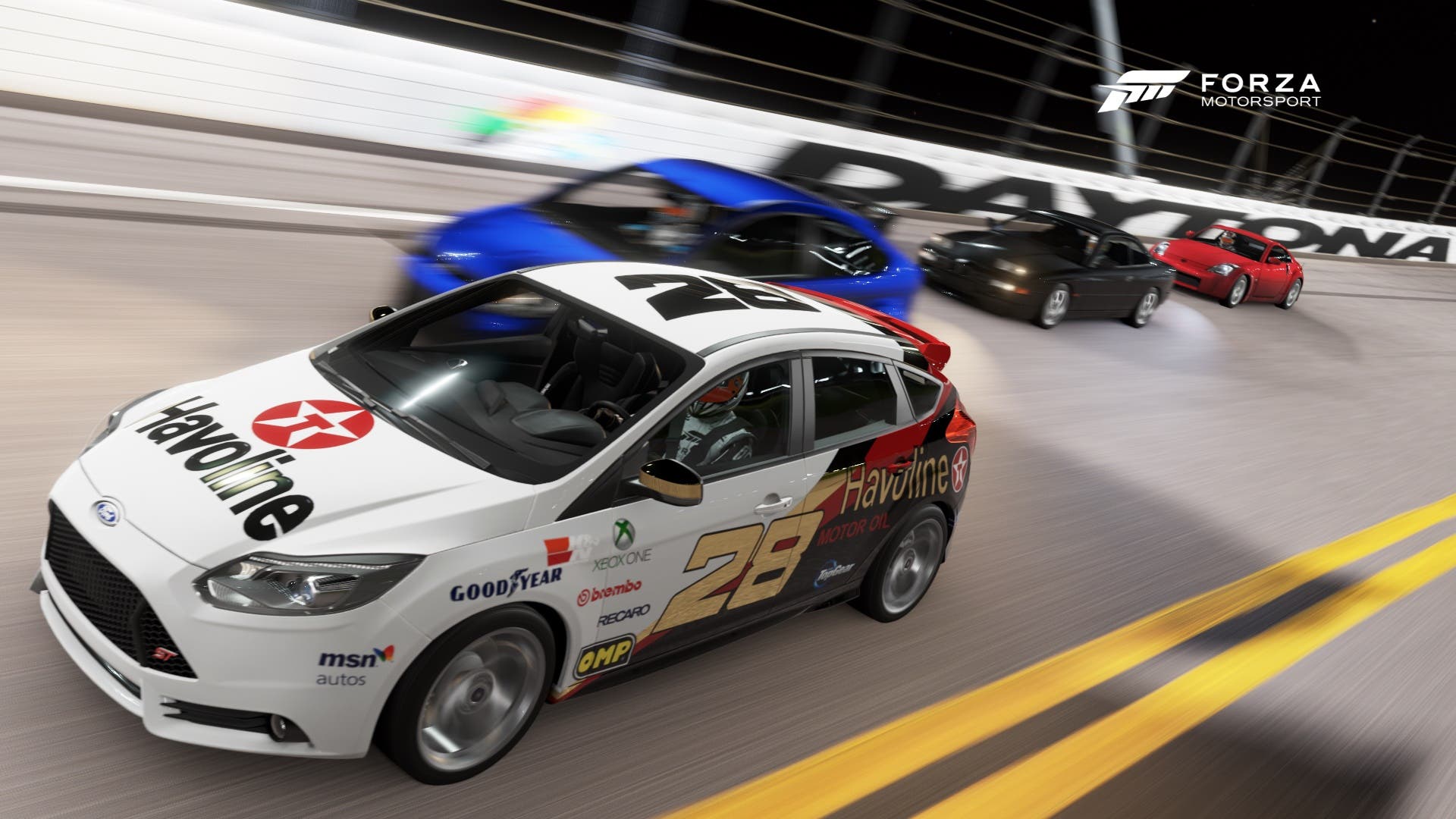 Brand new to any Forza is the new Mods feature. Basically they are cards you purchase with in game credits that you can equip (up to three) to give you bonus credits in return for certain conditions or boosts that increase your performance on track. At first I didn’t think I would be using them all that often but after I purchased my first deck willingly, I started to use them more often. Right now I have a crew card that gives me an 18% bonus to brakes and a bonus to grip. I also have a card equipped that reduces my brakes by 15% but gives me a bonus multiplier for experience. There are some neat things that can come out of these Mods so we’ll see how this evolves throughout the game and into future titles.

Online hasn’t missed a beat either, it’s still fun to race around with friends on all the various race types included in the game. You’ll find standard class-specific races as well as drag race and drifting competitions. Turn 10 has included a new League Mode, where developer-curated matches operate on a schedule with a Spectator mode included. This means there is increased pressure from having your races potentially streamed to large audiences. For me though, I’m boring and I’ll just stick to regular old fashioned circuit racing. 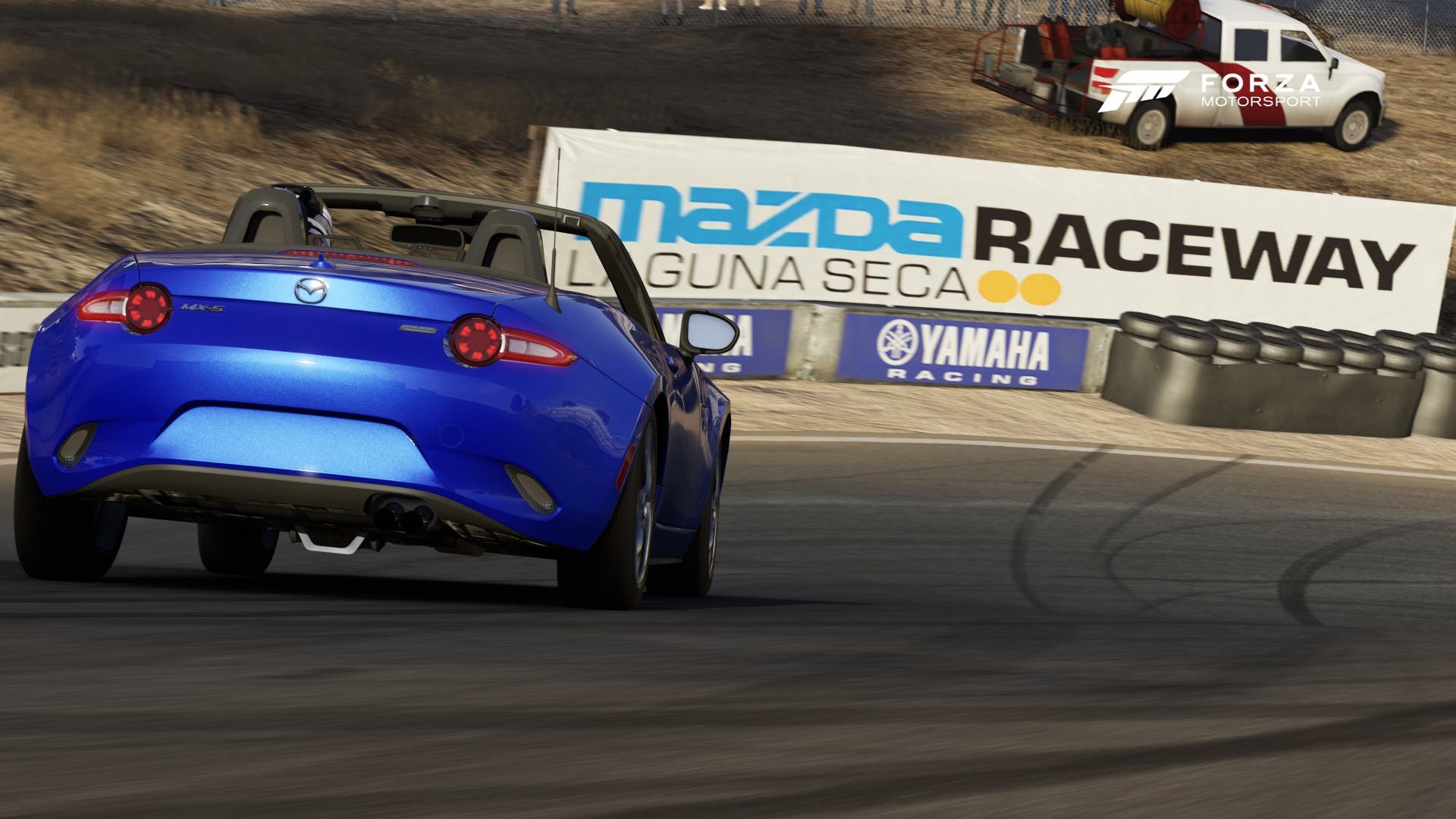 Forza Motorsport 6 is a love letter to cars and the men & women who love them. From the eye-popping visuals, the beautiful car sounds, getting racing and car enthusiast talent to narrate to you, and including many of the best world famous tracks (where’s Tsukuba?!) I feel Forza Motorsport 6 takes that philosophy and drives it home, as Turn 10 has done with each iteration of Forza since the beginning.