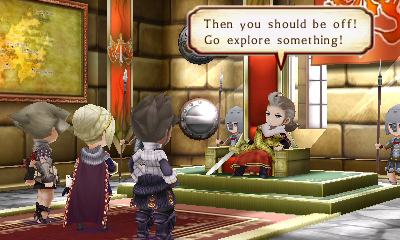 The Legend of Legacy Review

When a new roleplaying games comes out, if it has a certain style or charm to it from a visual standpoint, that is usually enough to get me to play it. Roleplaying games encompass a huge part of my childhood and always bring back fond memories, along with new ones created.  The Legend of Legacy has solid art design and a fantastic looking world, but these things along don’t always make a game great. The Legend of Legacy is the story of the island Avalon, most recently having been awakened from a long slumber. This of course gets adventures to visit in hopes of accomplishing their dreams or goals of treasure hunting and soul seeking. The players get to choose out of the seven which character they want to use and that ultimately helps shape their story and reasons for being on the island. Players head into the town, get their bearings and then it’s off to explore and adventure. That’s the plot in a nutshell and unfortunately there isn’t much more to it than that.  Over the course of the 30 hour game, there is little interactions to give meaning to characters or any semblance of a huge plot or direction.  The game just throws players into the world and it’s off to do battle over and over again.

Luckily the battle system is fun and unique. Being that the game is a spiritual successor to the “Saga” franchise, combat takes place using turn based actions. As the player gains control they will have various stances to choose from. This align the character in specific spots that cater to assisting them in battle. New formations can be tailored made and named also.  Once these are selected, the player attacks with one of two weapons. The more characters use weapons and abilities, the more they level up. There isn’t a way to track how they level up aside from at the end of battles or during the fight.  It’s a different mechanic and it’s at odds not seeing a level up screen with points earned at the end of battle. Still, the game seemingly boosts the characters up over time and usage.

Dying in the game isn’t a huge deal either as at the end of the battle, players will resurrect but with lower overall health points. A simple rest back in town at the inn will restore the total available heath points. This along with all character getting their health back after each round goes a long way in keeping battles and combat flowing quickly. Which seems to be the main focus of the game. Only if all three characters are downed will the game end and a save state have to be restored.  Normally players can escape battles and return to the start of the exploring area map every time. Yet sometimes surprise boss battles come along that are unescapably and when downed from the sudden spike in difficulty it comes off feeling unfair.

Doing a lot of exploring and fighting here, luckily the game is solid looking RPG with bright colors and a wonderful soundtrack to get lost in.  Variation in areas are interesting enough with the typical desert, forest, beachy areas. Boss battles look unique enough in design but regular enemies seem to repeat far too often.  Playable characters have a cute and charming look that remind me of another 3DS RPG called Bravely Default, which isn’t a bad thing at all. It’s just a shame that these elements can’t cover up the downfalls of an otherwise beautiful charming game. The Legend of Legacy is a 3DS RPG that surprised me in various ways, good and bad. It started off pulling me in immediately, then left me exploring at my own devices. I enjoyed the lack of hand holding from the start and just letting the game do the talking.  Yet hours went by, no interesting story beats occurs, and the sudden spikes in difficulty left me cold. That along with a confusing magic system left me feeling sour. I keep coming back to the game for its charm, combat, beauty and soundtrack, but it’s not a game that is compelling me to play from a story perspective at all with little to no direction either. Hours later and I’m still no closer to really knowing anything of a plot or really caring about my characters. They are simply colorful empty vessels in a pretty world, that just so happen to get in fight after fight and level up. Yes there is a semblance of a story, but it’s very minimal and not enthralling whatsoever. If you’re looking for an interesting combat system and world to explore, this offers enough of an incentive for those players, otherwise you might walk away wondering what could have been instead.