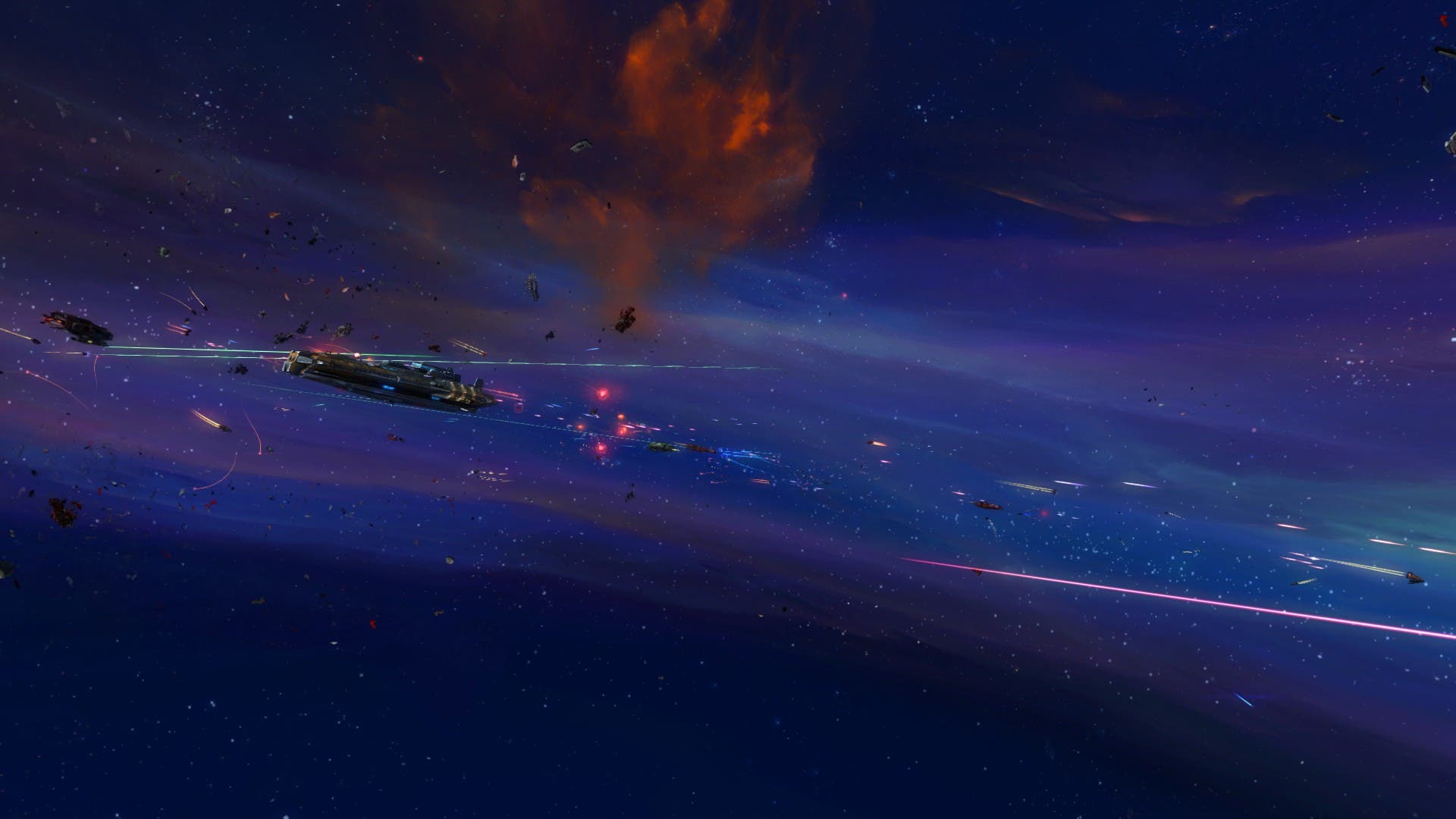 Rebel Galaxy gives you a blank slate in which to fulfill your wildest space dreams of becoming a pirate, trader, mercenary, be loved or hated by the militia, or even a hero or villain to the civilians that inhabit this galaxy. You can be all of these things throughout the course of your time with the game. There is no end at which you stop playing except under your own volition, but that will be a hard thing to do. Rebel Galaxy evokes space games of the past and the familiar while placing gameplay firmly in the present. Rebel Galaxy is made by mostly a two-man operation at Double Damage Games, with some contract help. Those two men, are Travis Baldree and Erich Schaefer, formerly of Runic Games who made isometric action RPGs what they are today. Rebel Galaxy is quite a distinct, and welcome change from that format and genre. What does change, is the scope of games like this. This is a massive game where you’ll spend over twenty hours exploring and building up your net worth, and that’s barely getting past the beginning story beats.

Rebel Galaxy plays like Freelancer with its freedom to do whatever with spaceship battles and the naval battles of Assassin’s Creed IV: Black Flag. The ebb and flow of battle is dictated by the weapons you place on to your ship. The first ship you start out with is limited, but it will help you learn how combat works. The broadside cannons require you to be within a certain distance before firing. You can fire away, but waiting for a charged shot will do more damage. As you progress, specific weapons will fire on specific targets. You can even hire a mercenary who will aid you in battles – which becomes crucial in bigger fights.

The game starts off with a story, which is a search for your missing aunt, Juno. The story is certainly a way for you to progress in the game, but it isn’t the only. It almost becomes somewhat inconsequential as it is completely optional. There’s a story end to the game, but no end by normal means. Along the way you’ll awaken an AI named Trell and that will carry for several hours as you pick up scattered pieces, but she doesn’t bring in any gameplay relevancy. So by skipping the story, you’re not harming yourself. I spent a good chunk of time investing in the story, and it has its peaks and valleys, but there’s certainly nothing groundbreaking here, but it is intriguing and provides variety in ways that the side missions you sign up for do not deliver on.

The side missions are pretty open-ended early on, giving you options for completing them. An early side mission has you choosing to mine for it yourself, or going after miners who will already have it aboard. This is good if you don’t have the means or desire to mine, you can just take what isn’t yours. These missions and their multi-pronged approaches become more narrow and repetitive as the game goes on. When in discussions through the story, dialogue trees at space stations or when being hailed, Rebel Galaxy allows you to tip the scales and have a dynamic morale system. Though, you’ll be spinning plates of who you are a friend and/or enemy to. The act of using your ship to take you from one end of the galaxy is never dull. Thankfully there’s never a concern of conserving or having to maintain fuel. It’s always there when you need it. Whenever you’re traversing the galaxy, you’ll be doing so at great speeds. As you’re about to engage warp, the camera zooms in as map zooms out to give a sense of scale and speed as you’re propelled through space. As you travel, you might be bumped out of warp for stellar mass, or enemy engagements, and never for anything else. When you approach a planet or space station, you’ll be taken out of warp automatically. Between point a to point b, there might be concerns of there being too much “empty space”, but that just isn’t the case in Rebel Galaxy. Along the vast openness, there’s distress beacons and unknown signals that can be answered for some surprises along the way, good or bad.

The economy of Rebel Galaxy is constantly evolving, and is very dynamic. Some sketchy sectors of space will allow for contraband to be sold and bought, as well as some space slaves. It’s a bit harsh, but it does make for some good money. But be warned, if you venture into militia territory, they will scan your cargohold and either take it nicely, or by force if you push the issue. This makes Rebel Galaxy a game that has shades of grey and continues the notion that you can in fact play how you want. Rebel Galaxy is a big game. Each time a new game is started, everything is procedurally generated, from the enemies to the planets, to the placement of each star system along the way. There’s roughly 14 similar sectors, each with a different look and inhabitants to encounter. Once you make it to the second star system, it begins to be more profitable but higher risk, unless you are continuing to upgrade your ship and its capabilities.

There’s plenty of ship-types to facilitate the type of player you are. Ships like Corvettes for fast, agile, and vulnerable ships cater to miners and runners. Frigates are more for heavy hitting battle cruisers, always looking for a fight. Each ship can be upgraded on its core components like hull, shields, and weapons. There are also ancillary upgrades that are almost necessities, like repair drones and a faster than light drive system to carry you from star system to star system within the galaxy. The upgrades aren’t specific to the ship you are purchasing it for, so you’ll bring them all to a ship so long as it is bigger. If any component of the ship is smaller, extraneous equipment goes into the surplus tab. Each ship is noticeably and remarkably different, with stats detailing why it is better or worse than your current ship before you purchase it. I wish Rebel Galaxy had a bit better of a user experience, the menus are a bit clumsy to navigate. It’s only ever little things, such as not remembering that you were in Shipyard before, and taking you to the top of the selection at the Equipment Bay for instance. While the autosave is generous, I would have appreciated a quick save or manual save slot. These problems do not get in the way of enjoying what Rebel Galaxy offers, but it is just unfortunate to be reminded of them when playing.

This is game where outlaws rule, backed by a blues soundtrack. Though, a forgotten but welcome option here is the ability to use custom music from your MP3 collection, if you prefer. I experimented with many types, mainly sticking to Sci-Fi. For instance, setting the game’s soundtrack to the television show “Firefly” fit with the core theme of the game. But then I tried Guardians of the Galaxy and that gave it a realistic and down-to-Earth. Lastly, and most fittingly, I used the Syfy television “Battlestar Galactica” soundtrack to use, and it worked very well. It made every battle a dramatic encounter and certainly removed a lot of the levity the game offers, but it is very fitting. Rebel Galaxy‘s galactic vastness is staggering, and getting the best parts of Freelancer and Assassin’s Creed IV: Black Flag‘s naval combat is simply satisfying no matter how many times you go into battle. I wish there was a compelling reason to play the story, but not having that looming over your head as you go off and do something else is appreciated. Rebel Galaxy is a fantastic open-galaxy game that gives you the freedom and tools to play how you want for plenty of hours as you gallivant from star system to star system.