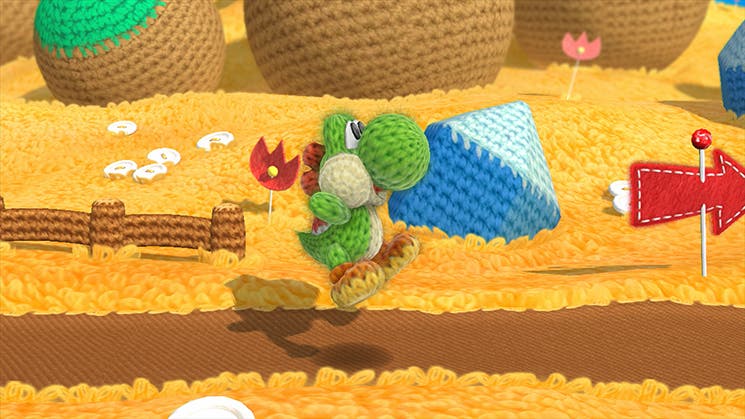 If you had asked me as a young boy if I ever thought Yoshi would have a ton of games after his debut in Super Mario World, I’d have said you’re crazy. Don’t get me wrong, Yoshi is arguably the best side-kick Mario has ever had in the main series and cute to boot. Now years later and many games under his belt, Yoshi returns and in a whole new, yet familiar way. Made of yarn and looking for his friends, this game can quite possible have you in stitches, in all the right ways. Yoshi’s friends have been stolen in typical fashion by Kamek the sly wizard fiend, and now is off to rescue friends in need. It’s as simple a premise as any other platformer game. That’s to say it’s not the reason we play them.  Of course gameplay is the star and Yoshi returns in one of his best outings yet. Featuring platforming that would make any fan swoon with delight.  From being chased by huge enemies on screen, diving into unique transformations like a umbrella Yoshi, and attempting to find all the hidden items, everything comes together to make it an experience that platformer fans are familiar with, yet always craving more of. Nintendo has a way of making platformers that outshine almost anything else in the market and this continues here. While the gameplay hasn’t evolved too much from its origins, the saying goes “if it’s not broke, don’t fix it”. There are things that do make the experience stand out and one which is the visuals which are absolutely charming and cute for the lack of a better term. I’d like to say there is another way to describe it and that could be as simple as saying “it’s as if a cute leprechaun, granted the wish of a child, which produced a friendly colorful unicorn, which found a barn of yarn, and then vomited rainbow strands all over the world” which lead to the creation of Yoshi Woolly World, but I’ll leave it simple: Cute. Levels comes to live with strands of yarn, that Yoshi can suck up and unravel other areas of the levels.  It’s just such a unique way to experience visuals in a game and to look as if the yarn could just jump off screen and into the players lap, which if players get the Amiibo version is quite possible.  Everything is made out of the stuff and it’s a visually striking experience. Yoshi experiences many unique worlds and a few hidden levels even. While the core gameplay is rather easy at times, with some moments of challenge, it’s finding all the hidden items that really give players the most out of their experience. Coming upon a collectible and not knowing how to reach it can drive a player crazy, but figuring out how to reach it and obtain it is one of the most satisfying moments in any game and that rings true here.  Don’t want to play alone, grab a second controller and play co-op, it may or may not ruin friendships and relationships, be warned.  That’s not to say it’s not fun together, but some hilarious moments of bouncing off one another, reaching each other’s, and getting the other killed can and does happen. Yoshi’s Wooly World really has no major faults I can find with it. It has excellent gameplay, perfect for any age. It’s colorful, easy to play, hard to master, and the soundtrack is music to my ears. With songs you can hum to and matching the visuals with it’s bright and poppy sounds, the entire package feels excellent. There is a small issue where if you play with the gamepad turned off, the game can stutter so fair warning, leave it on. The challenge in just beating the game is fairly easy, but getting everything in the levels is where the real fun starts and provides many more hours of gameplay.  It’s still as Yoshi as Yoshi platforming games ever were, but with a great new style, fun co-op, and more reasons to enjoy your Wii U. It’s a definite recommendation to any Nintendo or platforming fan.