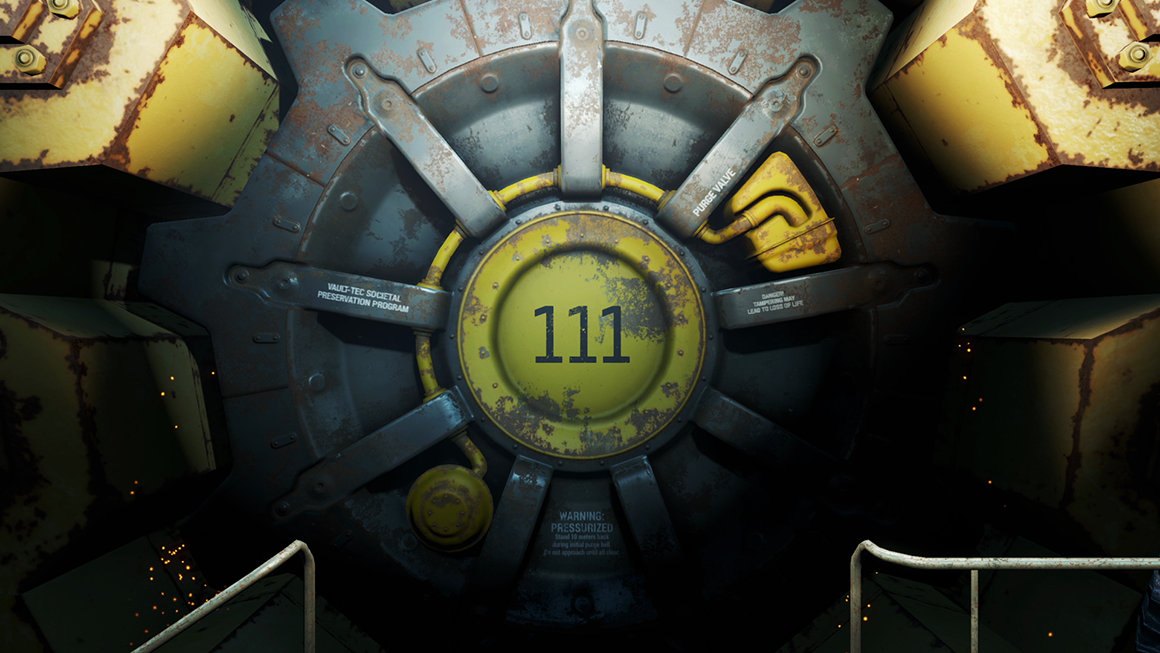 What if being on the brink of war meant actually going to war? What if everything you loved was gone in an instant? Fallout 4 explores the human element of both pre- and post-war Boston, seeing the fragile world shattered right before your eyes. Your journey in this new wasteland will allow you to have to make hard choices, creating friends and enemies, and help unite the Commonwealth through a fantastic system that allows you to rebuild whole communities through what you can scavenge. This is a bigger, more beautiful, and better-realized Fallout. As pre-release trailers and gameplay footage have shown, Fallout 4 places you into the shoes of a man or woman, who are the husband or wife to each other. They live in their idyllic home in the aptly named town of Sanctuary, and are raising their son Shaun. As the bombs fall to cities around the nation, panic takes over as you desperately make your way to Vault-111, seeing people get denied such as the Vault-Tec representative who just came to your door and ensured your place inside the vault. There’s a strange calm as you descend into Vault-111 just as the nuclear blast is ravaging overhead, but you’re safe – at least, for now. After some poignant story beats happen, it is time to leave the vault. Once you emerge from Vault-111 in the year 2087 (exactly 210 years since the bombs fell), you’ll have to learn what has changed since you last saw the world.

It is here that you’re off to do anything you please. You can choose to rebuild parts of Sanctuary, go off and see the next town of Concord as your quest indicates, or something else entirely. The freedom of Fallout 4 allows you to do anything you wish, as quests can be continued and delayed at-will. Walking in any number of directions can lead to some unexpected moments and stumbling into side quests. Objectives often are a bit too vague, and with no way to review the dialogue that just transpired, you’ll have to pay close attention to what the characters say around you to provide clues. Dialogue options will always have you asking yourself, “what lengths will you go to complete you mission?” Even if the decision does carry much weight, it always creates a moment of pause before selecting an option. The combat of Fallout 4 is a tighter experience. Not only is the third-person view actually a competent view compared to the water-skiing character of Fallout 3, but the first-person shooting has received a welcome upgrade, with gunplay that feels tighter and more responsive. You can of course go to VATS (Vault-Tec Assisted Targeting System), and what now slows down time rather than stopping it completely. Now more than ever, do you have to prioritize targets and make decisions as you can also be taking damage during this time. This system works well, save for a few instances where VATS would teleport me to different locations within the same areas sporadically.

No longer is there a reason drop all the accidental junk you end up carrying around. In Fallout 4, every item is meaningful and worthwhile. All items break down into common materials like steel, gears, wood, and more. So that wonderglue, pencil, and desk fan are something worth taking as you can find a way to use it. These items apply to all elements of building with weapons, armor, and housing. The housing selection is all pre-fabricated walls, fences, door, and buildings. You don’t get to customize too much in that aspect, but a completed house will be entirely all your own. These common materials can be used on building defenses for your settlements. If you need a specific item to complete that turret, you can tag a material so when you find it in the world, you know that it breaks down and can complete building said turret. There will be some quests that teach how some of these systems work, but it’s often unknown as to what you need to do to do any of the crafting in the game. You’ll be surprised at how soon you get access to Power Armor, but it is an old set than can have its pieces swapped out for newer ones. It also has limited use, now using fusion cores to power it like fuel. Unlike Fallout 3, it is no longer treated as traditional armor. This makes a special use case, where you are getting into a type of vehicle rather than super resilient armor you wear like clothing. That animation of how you get into it is like how the Iron Man suit envelopes Tony Stark, and it never gets old.

The updates to the well-worn systems we were used to in Fallout 3 and Fallout: New Vegas are noticeable in Fallout 4. Most notably with S.P.E.C.I.A.L. (Strength, Perception, Endurance, Charisma, Intelligence, Agility, and Luck) can you upgrade your base stats. Each stat carries with it some perks, and you can even preview their progression to determine whether you want to proceed down this path, and what requirements need to be met. Other tweaks, while minor is the fact that when you sprint, this drains your AP (action points), this serves the purpose of stamina out of VATS, and Action Points when in VATS. Thankfully, as quickly as it empties, it gets refilled just as fast. As you acquire radiation from bad food, water, and areas that has high concentrations of the glowing nuclear waste now chips away at your maximum health. This has you rethinking what you eat. A way to combat this aside from taking Rad-X for resistance or RadAway to remove the radiation, is to cook your food. Now at campfires or places where there’s a cooking station, you can now cook your irradiated meat so that it no longer damages you upon eating it. This system is so incredibly smart, that it makes you wonder how you ever played this game without it.

One of my favorite changes is the fact that looting no longer has an interface you are locked-in to. You now just look over the body or cabinet, take your items, and go. The lack of a karma system is still present, but not in your face. Companions will like or dislike your actions if they are around. An odd choice, is the fact that waiting can only be done seated or in a bed. Even out of combat, you can’t wait standing in the wasteland. Boston is not a city I’m too familiar with. It is a city with historical significance, but not one I can recall specific “landmarks” like I can with Vegas or Washington D.C. That said, it’s less of an issue with a city and it’s surrounding towns so full of life, color, and things go see and do. The Commonwealth has areas with unique looks such as swamps, dense forests, and little towns trying to survive the harsh reality. The rain and thunderstorms that often comes, makes these places especially atmospheric when strolling through, but be sure to hide when the sky is green and you take on radiation from the ensuing acid rain.

You’ll be quick to notice that no longer are you awkwardly zooming in another character’s face as you begin to engage in a conversation. The camera has more cinematic angles and touches. While it wasn’t something that bothered me, the dialogue options are limited to four short phrases, and what your voiced character will actually say is a bit different on delivery. A wandering dog you find early on, the Fallout name of “Dogmeat” becomes a meaningful companion in later quests, and as you get many others like Piper and Valentine, you realize what they can bring to each encounter. Though, if you choose to go it alone, a cumbersome interface awaits as you either want them to do something, ask a question, or even dismiss them to have them go back to a safe place.

As you explore the wasteland, radio station signals will come and go, giving insight to what these deejays are thinking. As you listen to the people having their conversations around you as you walk around, this is a world that wants change (that hasn’t had any in 200 years). It’s a somber place to be at times, and the music that accompanies these moments reflect these emotions, and is excellent. New to Fallout 4 are the synths. In a Blade Runner-esque fashion, they are androids that are progressively becoming more human, while trying to understand what humanity is. They are a big factor to the Commonwealth in and around Boston, and are intriguing to get to know both the good and bad guys. While there isn’t much in the way of newness surrounding enemy types, the changes to some of the existing ones can be downright scary. Feral Ghouls now rush you not only packs but with such ferocity that the stumble, but will ultimately surround you and do massive damage. They are no longer an idle threat, they are massively powerful this time around.

You can now encounter legendary enemies that will mutate and a unique drop in the form of a legendary weapon will be available for looting. It’s worth trying to engage these special enemies in the hopes of getting some unique loot that has a statistical advantage. Fallout 4 is not devoid of bugs or slowdowns. On PlayStation 4, the game did occasionally encounter framerate drops when in heavy combat and many enemies, but not when roaming elsewhere. Fallout 4 does a good job at maintaining 30fps on consoles. On PC, with settings set to Ultra and everything maxed at 1920×1080, I’ve had no issues while playing the game. It seems to be the most stable and superior version to play. There’s been some interesting side quest bugs, and almost a story mission progression bug that was thankfully resolved by dying and reloading the checkpoint. But none of the issues ever were too much that they became bothersome or annoying, but they were noticeable.

The checkpoints and auto-saves work pretty well and frequently, but they’re not always great. It’s always good to quicksave or create a manual save when necessary, even if that’s a couple of steps too long on console, it’s a snap on PC. The map is still wonky and not as informative as you want it to be, as many icons will be cluttered together. Playing this RPG from the first or third-person perspective is incredibly engrossing and satisfying. Learning about what happened in and around Boston and the world is satisfying as you read computer logs and hear conversations. Fallout 4 is a better introduction to the series than Fallout 3 and Fallout: New Vegas ever were. The opening moments of Fallout 4 are more informative, thrilling, and immersive than any Bethesda game that has come before it. The countless hours that can be spent in Fallout 4 is the absolute best time you can have in a post-apocalyptic wasteland while listening to 1950s-era music as you’re shooting ghouls in the face.