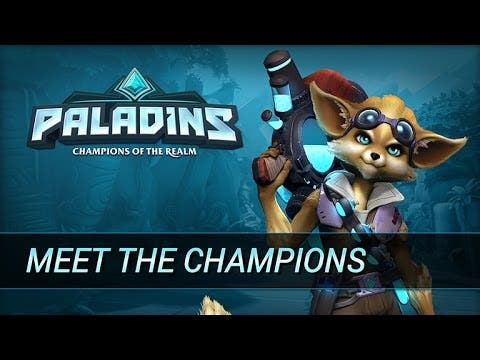 Hi-Rez Studios, creators of the hit action game SMITE, have released Paladins, a new team-based, first-person shooter, into closed beta on PC. Paladins combines a competitive online action experience with a collectible-card-based progression system, giving players tactical choices for amplifying their abilities in each game and ensuring no two matches are ever the same.

“We’ve been giving gamers hands-on play time with Paladins at select events around the world since we unveiled it in August, and the response so far has been incredible,” said Hi-Rez Studios COO Todd Harris. “We’re excited to get the game out into the community so we can fine-tune it further into a truly spectacular multiplayer experience.”

Players interested in joining Paladins’ closed beta can sign up for a chance to earn a free invite at www.Paladins.com. Alternatively, instant closed beta access can be acquired by purchasing the Paladins Founder’s Pack, which includes an exclusive Fiery Warhorse mount and 20 card chests, for $19.99 USD. In-game progress may be wiped during the beta phase as the game continues to evolve, although any purchases made will always be saved.

During this first phase of the closed beta, access to Paladins’ servers will only be available from noon to midnight EST, eventually moving to 24-hour testing as soon as possible. Streaming and video capture are allowed from the beginning of closed beta.

Paladins combines classic fantasy elements and visuals with modern multiplayer action design. Players on each team must work together to capture points and push their colossal, base-annihilating siege engine toward the opposing side’s gates across a vast map. Every champion has a primary weapon, unique combat and movement abilities, a personal mount, and a customizable deck of  cards. These cards are drawn and activated as matches progress, giving players and teams strategic opportunities to change the course of each game.

Paladins is expected to officially launch as a free-to-play game in 2016.