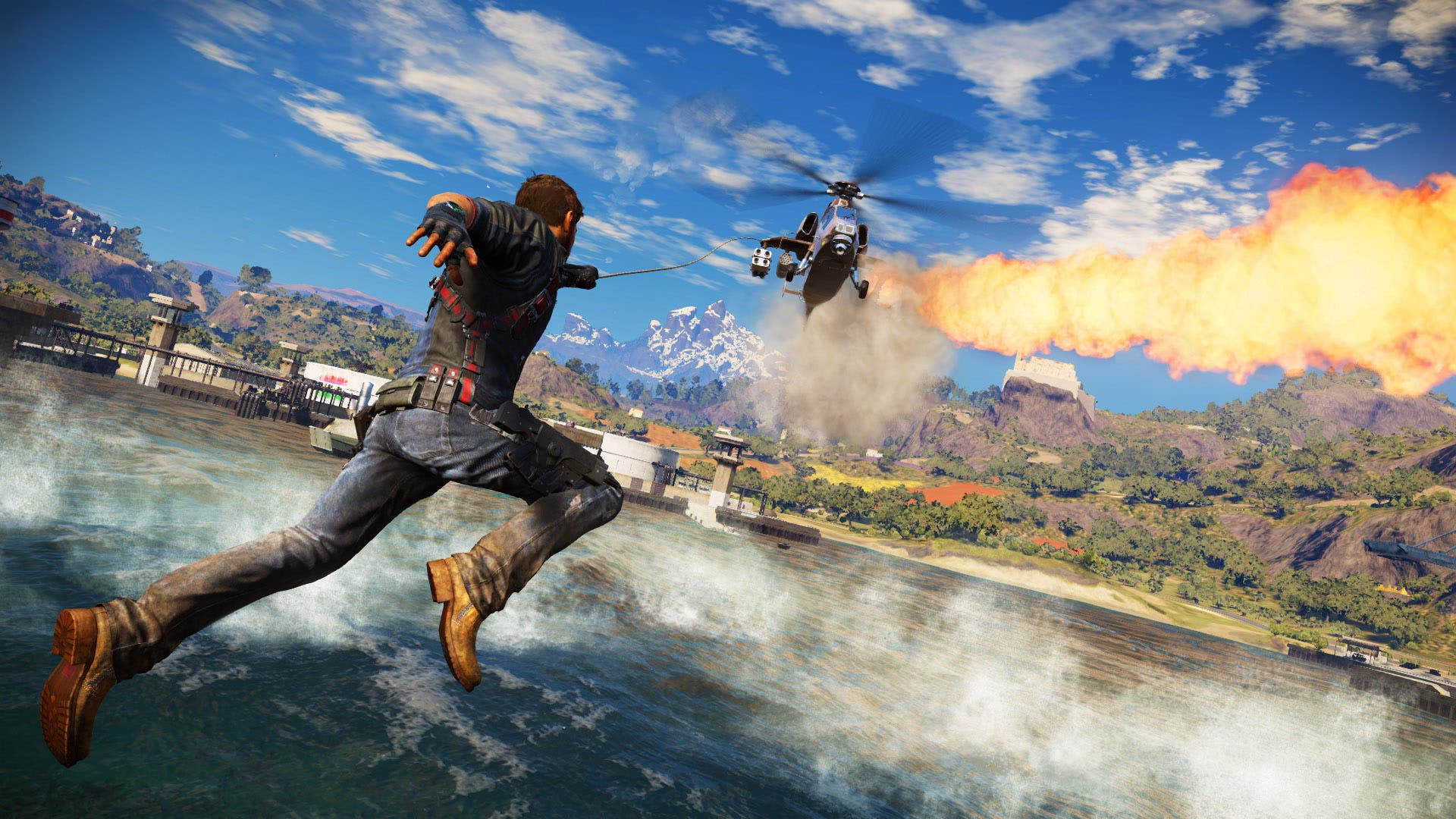 Just Cause 3 has been a long-awaited sequel, especially to a game that saw extensive modifications and even a completely fan-created multiplayer mode for Just Cause 2 (which didn’t ship with any kind of multiplayer). Just Cause 3 may not have multiplayer, but it attempts to connect you with your friends via challenges. The dedication of the fanbase to create new and exciting tools for Just Cause 2 saw no bounds to make it even crazier and wackier. Just Cause 3 draws inspiration from those creations. The game series is known for its egregious explosions and insane stunts, and now it is available on PC. Just Cause 3 is full of kinetic action and destruction, but it falls short of being as good or as polished as its predecessor. Editor’s Note: This review has been amended from its original to highlight the improvements and specifics the PC version offers while still discussing the game as a whole. You can read the console review here.

Unlike the console versions, there is no Boom Island to explore, whether you want or not. Once the game is installed, you can just start Just Cause 3 proper. The initial load of the game is much short than its console counterpart, but there’s an odd waiting period while the opening animation of Rico on the beach happens. It seems like it is performing a connection to the server underneath the surface. Soon enough, you’re in and exploding things faster than the console.

You again play as Rico Rodriguez, who’s world-famous at this point, judging by the way civilians react to his shenanigans. Rico has a different voice actor this time around, making him sound more like from a telenovella, which only exaggerates his character to bigger and better heights. He’s returned to his home of Medici which has been overtaken by an evil dictator, surprise surprise. There’s characters from Just Cause and Just Cause 2 where they make their returns, too, as all good trilogies tend to do. This story is a personal one for Rico, and has a serious tone goes against its fun-loving, care-free attitude the game expresses everywhere else. The crux of the game’s flow this time around is to liberate settlements and bases through chaos. Chaos being the point system earned from blowing shit up. A checklist of items will be presented to you destroy by any means necessary: guns, tether, explosive, or with vehicles. The choice is yours, but it only matters that you do it all. You’ll have to blow up satellite dishes, transformers, turbines, and many, many more things to accomplish the goal of liberating them. Once it is all said and done, only then the province will be free of DRM, aka Di Ravello Militia’s control. It is by design that it is repetitive, but it feels too formulaic at times to be enjoyable over long stretches of time, so it is good to split up your time between liberating, completing challenges, and playing story missions.

There are dozens of challenges scattered throughout each province, more are unlocked as settlements or bases are liberated. Challenges vary from land races to charging across a landscape to set off a bomb to wingsuit challenges and even shooting ranges. These challenges are meant to be meaningful this time around, and incentivize completion by rewarding you with modifications to existing systems across destruction, explosive, land vehicle, air vehicle, traversal, etc. So now, something like a land race that was a throwaway side activity in games prior, is now something worth doing, even if the vehicle handling isn’t so hot. You aren’t spending points, so you’re never “locked in” to a certain path for a mod. These mods can be toggled on and off at-will, and fills a meter based on its cost. At some point you’ll have to pick and choose what’s active, but you’ll likely not want everything activated at once anyway. Rico is very resilient, able to take a lot of punishment. While there is no minimap or in-game health system, the game does a great job of telling you how close you are to death through its sound design and visual direction. This time around, Rico recovers health automatically as opposed to finding health packs. As Rico causes more trouble, he will reach up to five different levels of heat, and reinforcement requests can be canceled by killing the man calling it in. Once you evade them, they will go into a search pattern, and eventually call it off if you disappear long enough.

During times where you are liberating a settlement or base, Just Cause 3 will save after each action is completed, making for little to no lost progress. The map will show you each location of the item to be destroyed, but it is very hard to see and the map doesn’t zoom in enough to get a better idea of where it is at. Often during a liberation, will be SAM (Surface to Air missiles) sites, these can be hacked to make the SAMs work for you, rather than against you. This will make things easier as your heat level rises, and you can do what you need while the SAMs take out the helicopters. My experience with Just Cause 3 on PC is rather consistent, which is not something I can say with the PS4 version. When on foot, the framerate would hold up during explosions, wingsuiting, or parachuting. However, I’d lose 10-15 fps from just driving around. When the game runs at 60fps, this is less of a concern. I also was running the game with max settings. When Rico is zoomed in to take more precise shots, his movements and animations are jittery like a junkie looking for a fix.

Controls have some nuance to them. It’s easy to learn how everything works, but things like swimming is a chore, and cars control badly, even ones that are high-performance. While it is rare you should be driving or swimming, when you have to due to the circumstances, it’s never fun. The flying controls are fine, with some odd design decisions for rudder controls and lack of camera movement on helicopters. New to Just Cause 3 is the use of the wingsuit, which allows Rico to move at blistering speeds. There’s a faint cursor that shows you how to “aim” Rico through tight spots and useful during challenges. The grappling hook gets a few upgrades this time around, actually taking cues from the PC modding community, where you can now tether multiple times (up to six things). It’s here where you can retract these tethers to pull items, people, and other objects together to make them explode or have wacky physics interactions for your amusement.

No matter the time of day, or weather conditions, the game is stunning to look at an explore. Just Cause 3 is beautiful, and full of little touches. Such as displaying knots when you’re in a boat, or kilometers per hour when in a car or plane, which is the metric system an area based out of the Mediterranean would do. When hovering close to the ground, flowers and grass will bend to the helicopter’s blades. The game looks crisper on PC, and is the visual standout over consoles. The weapons of Just Cause 3 are pretty standard, and realistic, with the explosive weapons getting the most liberties. While you limited ammo for most of your weapons, your charges (C4) have an infinite supply of, making the chaos you cause exponential once they replenish. What’s new here is the idea of Rebel Drops, rather than the Black Market of Just Cause 2. Rebel Drops allow you to pick a replacement loadout, and a vehicle to be dropped to a location of your choosing. That can be called upon with a limited supply of beacons. Items given at a Rebel Drop have a cooldown before they can be called upon again. As you acquire vehicles and deliver them to liberated garages, will give you more variety in what can be dropped at your current location, so that you’re not ever stuck without a vehicle to get somewhere quickly.

Just Cause 3 amps up its chaos with the ability to destroy bridges, bases, and various structures. Not everything can be destroyed, but there are callbacks to Red Faction: Guerrilla with its destructibility this time around. Not quite GeoMod, but it does a fine job when things go boom. And things will go boom often. Medici is a huge world, one that rivals that of Just Cause 2‘s Panau. Thankfully you can fast travel to locations that have been liberated, cutting down the travel time or the need to find a vehicle fast enough to get you where you want to go. There’s distinct biomes that traverse the desert, snow, tropical and more that looks different as to not feel the same through during your time with the game.

No open-world game would be complete without collectibles to obtain, like rebel shrines and tape recordings of the evil dictator, which are easy to find via subtle signal strength meter. These never felt important, but some of the tapes are interesting to listen to while you’re roaming around. You’ll also briefly interact with civilians in the form of encounters. Encounters will have you helping a civilian get their boat to water, or helping their out of gas car reach the gas station, which you can do many ways, but using the new grapple mechanic and attached to a car to reel it in.