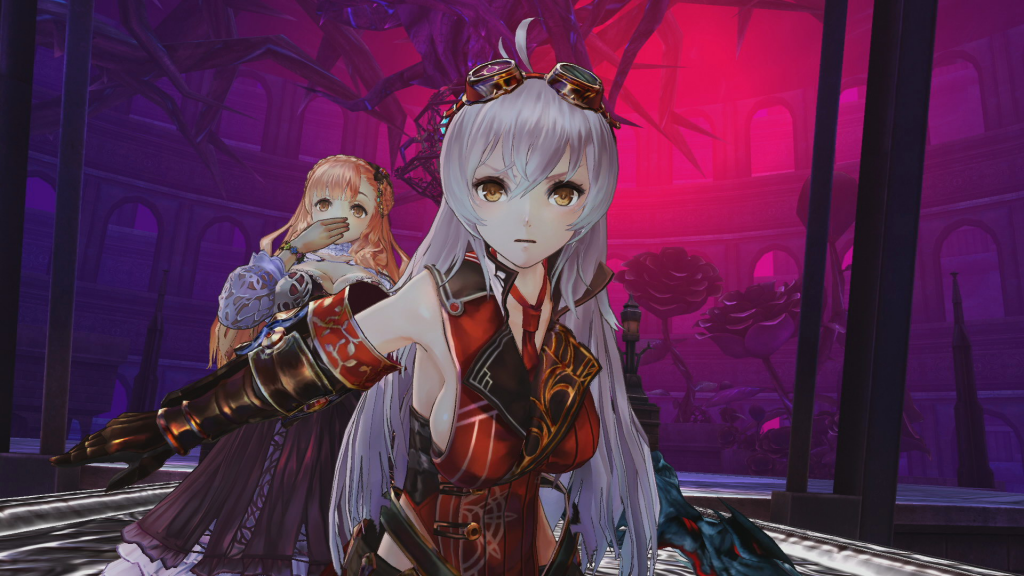 Developer Gust is no stranger to role playing games and have garnered a huge following from the community. They usually stick to the more traditional style of turn based role playing games though. Nights of Azure is an action RPG and quite frankly I don’t believe there is enough of these types of games, particularly in this art style. So did Gust do well or should they stick to what they know best? Players take control of Arnice, a Knight who is fighting for the cause. What cause? To prevent the awakening of the Night Lord. It sounds dark and that’s because it is. While the game features a very cartoon and vibrant style and aesthetic, don’t worry. At its heart the story and themes in Nights of Azure are very serious and even somewhat mature. Combat is all in real time and for those that might remember a game called Castlevania Curse of Darkness, might just feel very much at home. As players use Arnice to hack and slash through the various monsters and demons, she can also summon the help of other creatures she has called Servans. Some heal, others perform area of attack, and more. Continue using them and the level up learning new abilities also. So while combat can feel somewhat limited, it also feels just good enough. Not exactly the most robust attacks or in depth combos but it always kept me entertained going between the main characters attacks and the Servans. Dodging becomes a key element to ensure victory also, but the challenge never really felt challenging. Actually for the most part it seemed rather easy, if not flashy, though some moments had difficult spikes later on that could really test player’s skills. It’s not Dark Souls hard but it still comes across as a sudden spike of difficulty, but going into it knowing that will help curb those reactions.

As I mentioned earlier, visuals are very bright and unique. From the locations, to the characters and enemies.  While the game doesn’t push the graphical capabilities for the PS4, it has a nice smooth look and vibrant even with its dark setting and atmosphere. That said the game runs extremely smooth for the most part with little load times to get in the way. I’m not sure I can call this a treat for the eyes but something about it just resonated with me in both style and gameplay. While story is present in some cut scenes and heavy dialog moments, the presentation is just about right, though I felt sometimes the dialog dragged on a bit too long and had me craving to get back to the action.

Nights of Azure is a game that I didn’t know much about but totally won me over. It’s going to cater to fans of action RPGs by far and those that enjoy a decent story. The relationship that the two woman have, the questions that arise, and the love theme that permeates the story is one that feels unique and different than most titles when trying to tackle these themes. That combined with the more than adequate gameplay, visuals, and a fantastic soundtrack. I really don’t have too much to complain about. Sure it could be a bit more interesting in the gameplay department at times, especially if the core combat doesn’t strike players as fun. For me, this felt like taking a step back in action games from years ago, just more refined and polished. It’s hard to explain, but It’s just a feeling I get when I play Nights of Azure and that’s what makes me treasure it just a bit more then maybe most will.

A PlayStation 4 code was provided for review purposes