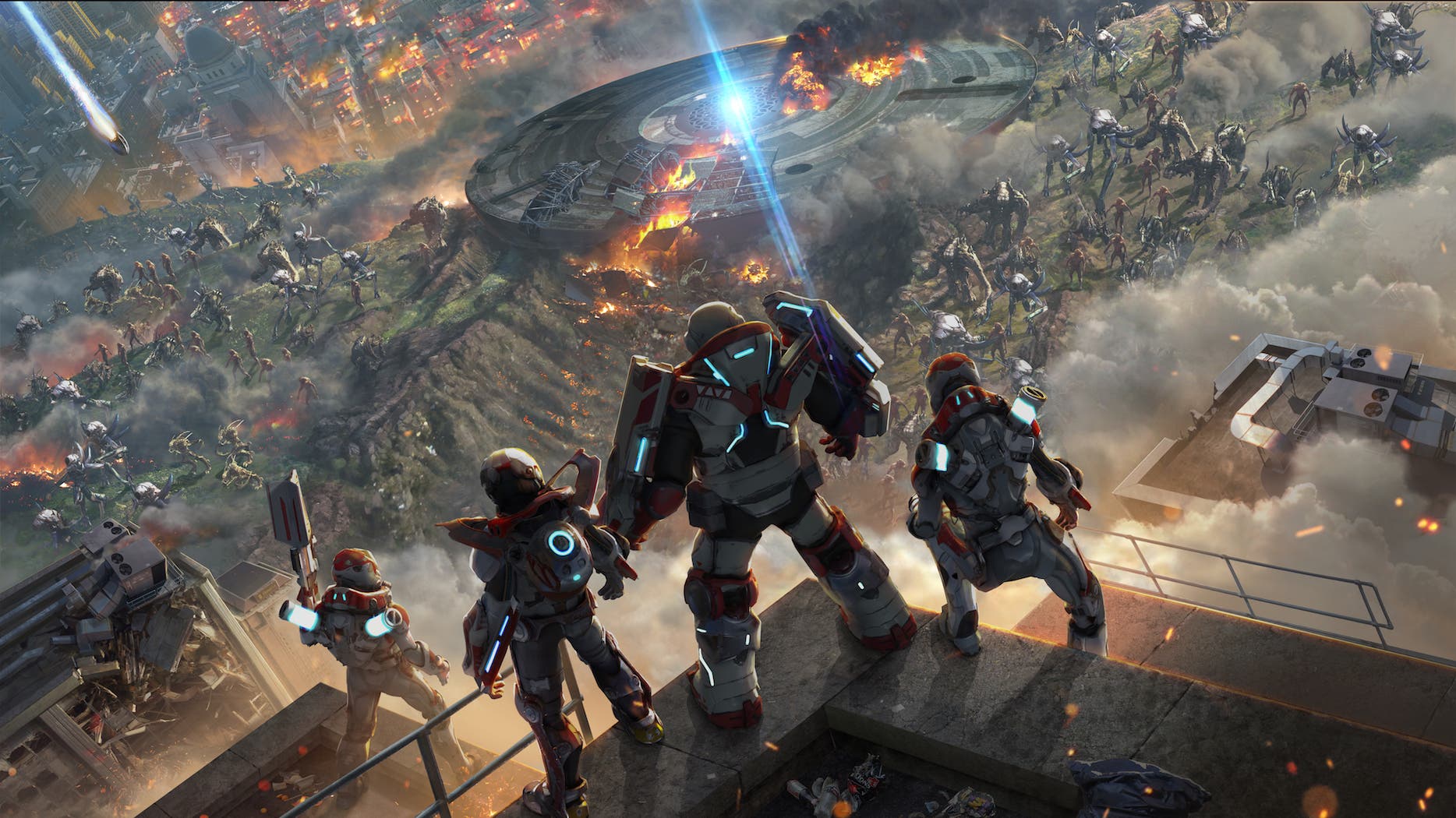 The Scorpions song, “Alien Nation” has many fitting lyrics, but the one repated most that bares resemblance to the goings on is ‘Beware of the alien nation’, this is true for Housemarque’s Alienation. An invasion of Earth has begun, and now it is time to repel that invasion. Alienation is a spiritual successor to Dead Nation, Alienation is a damn excellent twin-stick shooter that doubles as an action RPG. Alienation reminds me of Diablo III in that it’s more like a traditional action RPG with loot and augmenting gear. The difference here, is that not all of the missions flow into one another, allowing you to step out and change your gear around, then start the next mission. Those who were turned off at Helldiver‘s unyielding difficulty and challenge will find an easier time with Alienation, even if you can’t pause the action. Combine that with twitchy twin-stick shooting, and this is the makings of something great.

There’s three classes to play as: the Tank, the Bio-Specialist and the Saboteur. You start by choosing one begins the campaign as that class. The other two slots allow you to start over and experience them. Those familiar with action RPGs can create a Hardcore character that, once killed, stays dead and you must start the game over again. It’s never been an interest of mine, but I really like that it is here. Moving and shooting in Alienation requires quick reflexes. The game has an active reload mechanic, this is something seen used many times, but here it is a necessary action to get right. While you have offensive capabilities like doing a melee attack, or a rush move to get away, nailing that active reload doesn’t do anything but get you back to shooting again. As you’re backpedaling away from a horde of enemies, messing that up can have consequences. Additionally, you can have up to three active abilities. Playing as the Tank, there’s a shield that can be deployed to deflect fire and reduce incoming damage. Or you can rip everyone to shreds with the rail gun.

While there aren’t that many new locations, Alienation lets you free-roam a location once you’ve dropped into it. You can of course go straight for the objective marker, but there’s events to uncover that have special bosses that drop special loot. There are respawn nodes that must be activated that, should you die, can allow you to respawn closer than where the heli dropped you off at. Enemies come in all shapes, colors, and sizes and will spawn, spew, and hatch from various crevaces. It’s up to your skills and ever-changing looted gear to keep from dying. If I had to say anything negative thus far about the game, is that all of the weaponry is named the same, but the differently colored items based on their tier of importance and damage output and augment slots are the only thing that differ them from one another. It would be nice if the names changed, so you knew you were getting something special. Leveling up in Alienation allows you to pick active and passive abilities. As you spend more points into them, items denoted by a plus (+) icon can be swapped at any time, giving you freedom and how you want to build your character. The only thing you can’t do is completely respec your character, and reset the stats. Replayability is high and rewarding and lots of fun to join in on randoms or with friends.

As you go through a level, you’ll gain an experience multiplier which resets after death. This encourages skillful play, or perhaps some cooperative play for up to 4 players online and off. There are three difficulties that missions can be played on: Rookie, Professional, and Veteran. Unless you have kids, there’s almost no point to play on Rookie, it doesn’t provide any benefits of any good gear to drop, more or less just lets you enjoy the story. I played through the game on Professional, but only in Co-Op did I dare to play on Veteran, which was a heavy challenge that paid off nicely. Alienation is not short on showing off its particle effects, explosions, and excessive use of vibrant colors. All of this make Alienation look like a lively game with it’s flora and terrestrial fauna that have it out to kill you. It’s just a great game to look at, and though the framerate sometimes dips, is just nothing short of jaw-dropping to see.

The game does have some options for players in the end-game without asking them to start over. There’s end-game content for them to boost a new ranking and get on some new leaderboards, but that’s about it. Hopefully more will come in time. High-level characters can invade other players games like Dark Souls for some PVP action if they so desire. The PlayStation 4 has its share of games like Alienation, but having been made by Housemarque, allows them to give the game its unique touches like familiar audio coming out of the DualShock 4 speaker, and using the touchpad to navigate the map. Alienation is quite brilliant, simply put. It takes everything you love about action RPGs and twin-stick shooters and wonderfully mixes them into highly replayable game that comes enthusiastically recommended.