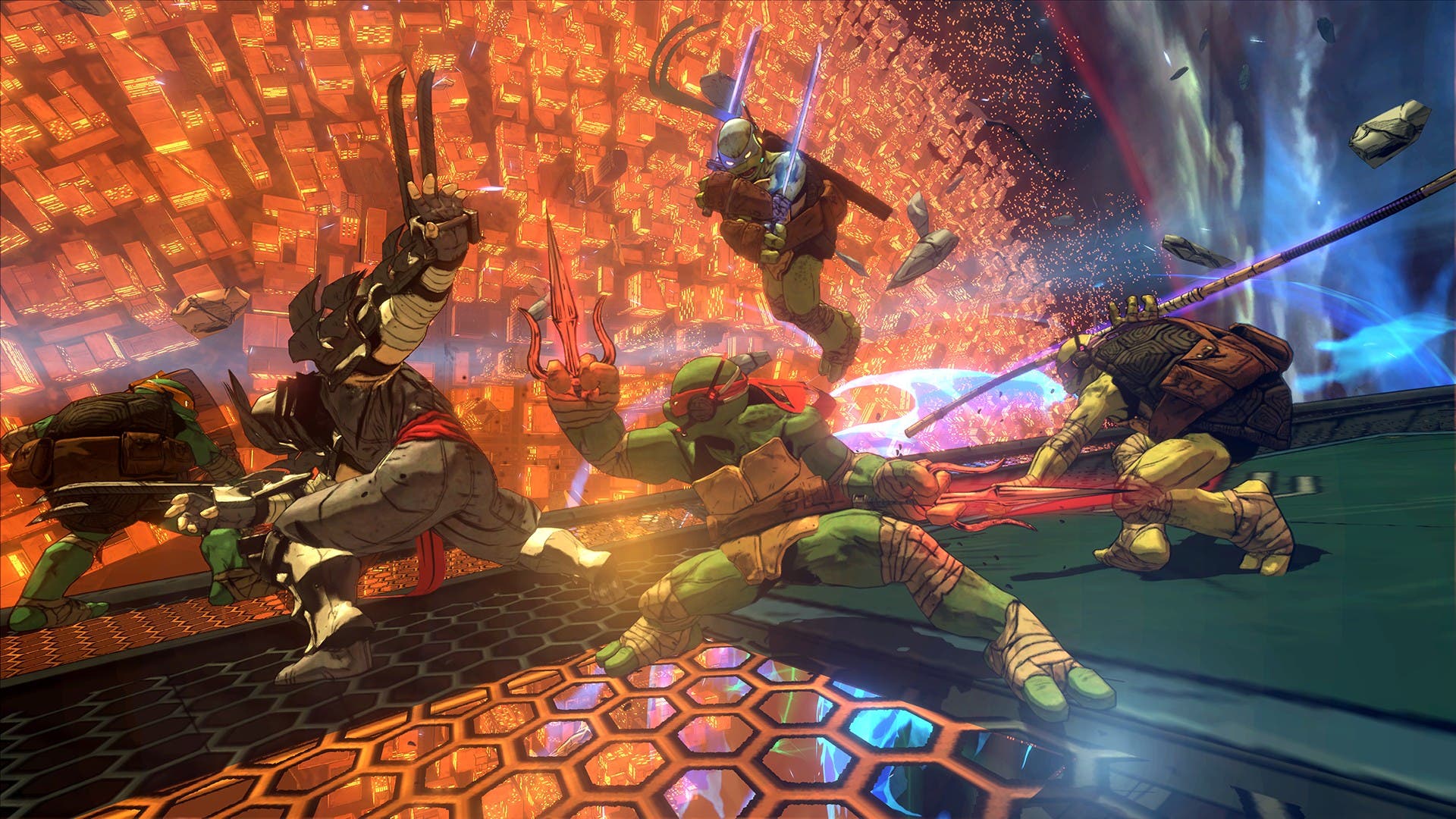 The biggest thing you’ll notice about Mutants in Manhattan is that the game world feels light. As if decisions were made based off of deadline goals rather than fun and immersion. That’s not to say the game isn’t fun, but on the surface, it’s easy to dismiss the Mutants in Manhattan as a quick cash grab since its release so close to the next Michael Bay adaptation. But if you take a look at Platinum’s catalog and the amazing work they did on Transformers: Devastation, it’s hard to feel like they gave Mutants in Manhattan an equal share.

Mutants in Manhattan sticks close to the time tested TMNT genre of brawler, where the Ninja Turtles combine forces to defeat enemies in order to save New York City. All four turtles are on screen and you can swap between them on the fly. The AI might be a little too good because on easier difficulties, you’ll easily complete an objective just by standing there and letting the other three beat up on the baddies for you. Great for less experienced players but a little boring if you’re looking to actually do something. The campaign is short and made for multiple playthroughs, about five hours in total. You’ll progress through each level by completing small battles or tasks before you move onto the next one and eventually face off against a boss. The difference here is that it’s in 3D with somewhat large set pieces to explore. You’ll run from one end of the map, do a battle, then run over to another end and battle. After you’ve done enough of this to fill up a boss meter, you’ll be instructed to go fight that level’s boss. The battles are all pulled from a few different variations. You can expect to defuse bombs, return items to a collection point, survive waves of enemies, or a variation on any of these. There’s nothing inherently wrong with this set up but it feels as if this was the quickest way Platinum could incorporate some sort of structure to the game. With some better decisions about the game, one could imagine something more in depth and less repetitive.

With the basic action, you’d think they’d also skimp on story, but it actually isn’t terrible, it just doesn’t do a lot to add to the overall game. Krang and Shredder are doing something that requires time and their lackeys are fighting the turtles to give them that time. It’s a serviceable story and one that compares to what was in Transformers: Devastation. During fights, there is quippy dialogue between the turtles and they tend to talk to one another. Sparingly at first but once in a boss battle they just keep on yapping. Seems their interactions could have been more evenly laid out. You’ll be doing a lot of combat in this game and learning a combo system that relies heavily on dozens of special moves. Each turtle has four slots to fill with a wide variety of choices to pick from, moves that will compliment your play style. If you like to load up on healing abilities or focus on attack only, you can mix and match to your hearts content. I personally kept a healing ability on the same button for all the turtles to make it easier for me to remember and load the other three buttons with attacks. By earning points when battling, you can upgrade these special moves to become more powerful making completing the game on harder settings a whole lot easier. To complement the special attacks, you have scrolls that will modify each turtle’s abilities. You’ll find charms throughout each level inside collectible orbs and by drops at the end of the level. These too can be upgraded using loot drops you get off of enemies and orbs you find within the world. Since some of loot can only be found in certain levels in certain situations, at random I might add, this way of upgrading can become tedious.

When it comes to the Turtles and video games, the first question out of everyone’s mouth is what about four player co-op. Hey, if it wasn’t expected, it wouldn’t be asked every time. The answer to this questions is yes and unfortunately no. Since all four turtles are on screen at the same time, in a 3D space, it must be difficult to implement local co-op because there is none. No split screen, no screen sharing, nothing. If you want to play as a team, you’ll have to stick to online play. There isn’t anything wrong with online play, it’s totally serviceable and you can bring in your turtle of choice with the upgrades and scrolls you’ve unlocked to use. But there’s no replacement for having 2 – 4 friends or family in the same room beating up on foot soldiers. Family, now this brings up another discussion point about the game. Who is this game really made for? Transformers: Devastation was really hitting hard on the nostalgia hooks of the original Generation 1 cartoon to bring in the older crowd while still making a fun to play game for all ages. My almost 10 year old nephew and I both love the Ninja Turtles so one has to wonder if this game can copy the magic that Transformers: Devastation captured and appeal to both of us. Where Transformers played to Nostalgia, Mutants in Manhattan is using the current IDW design of the turtles in a cel-shaded look. This look isn’t bad at all and stays very true to the Turtles legacy. It’s not based of the original cartoon, the movies, or the original dark comics. Although what is it with designers adding some sort of accentuation to the turtles noses? The Bay movies have nostrils and this game has a weird line that, I guess, is supposed to evoke some definition but really looks out of place. Small gripe, I know, but yuck.

Anyway, the combat and levels really didn’t hook me because of all the repetition. After awhile it felt like things were dragging and wasn’t fresh. On the other coin, the way this game plays is perfect for the younger kids who just want to beat things up with the Ninja Turtles, as is perfect for my nephew. The downside for them is that these aren’t their recognizable turtles since it has nothing to do with the current Nickelodeon cartoon series or Michael Bay adaptations. Does he care, probably not but I bet marketing isn’t so easy when you have three different looks of the turtles to cater to. So basically, this game walks this line of mediocrity between being for fans of a younger age or adults who grew up with the Turtles.

In the end, it’s a good game for being licensed but at the same time feels like it was in a bit of a rush. Activision trying to make it out in time for Michael Bay’s next adaptation, when more cooking time in the “pizza oven” would have helped. Wait a minute, how did I go through this whole review without more turtle or pizza puns?