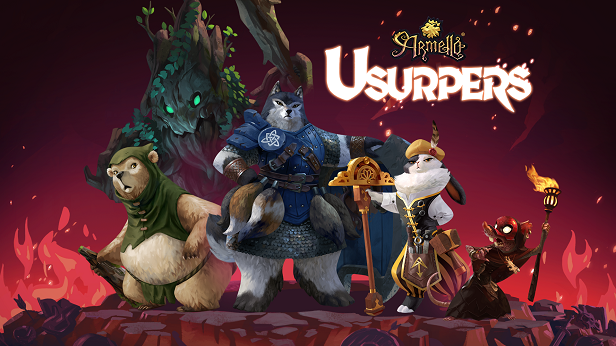 The Usurpers Hero Pack for Armello adds four new characters: Magna, Elyssia, Ghor, and Sargon to increase the roster from eight to twelve heroes, which adds four more of each clan type. Armello is a game that has a solid roster of characters to play as amongst friends and strangers, but the additions here make them worthwhile but not so much necessary. To get everyone up to speed, Armello released in 2015, and is a digital board game brought to life by League of Geeks and features turn-based action using cards to get items, spells, and tricks. Additionally, in combat you roll die and deal with what luck has in store. The goal of every game is to take control of kingdom where the current King, a lion has “The Rot”, which is a mysterious dark corruption. As each day passes he gets worse. Players can get “The Rot” as well. There are several ways to win: Get your Rot level higher than King to become Chaos Lord, get your Prestige to the highest, or by collecting four spirit stones and entering the kingdom and challenging for the throne.

In addition to the new heroes, each of the four animal clans also receives a new clan ring. The Aquamarine ring is used by Ghor, and makes it so that in battles and perils, you’ll receive +1 Moon so long as you have The Rot, Magna’s Rubellite ring gives +3 Fight when you only have 1 health remaining, the Rainbow Quartz ring for Elyssia gives +1 Magic at every dawn, and Sargon’s Tanzanite ring gives +1 Gold whenever you successfully escape a Peril encounter. These rings are really useful for any clan member to use, and doesn’t strictly benefit the new characters. It’s a small but meaningful addition. The first new character is Magna, part of the wolf clan with the ability of “Shield Maiden”. Any shield cards burned in battle reflect an opponent’s attacks. Magna has a high Body stat, the highest when compared to other wolf clan members such as Thane and River. Magna’s Fight, Wits, and Spirit stats are on-par with Thane and River, but the Body stat here is what allows Magna to stand out in combat and survivability.

Elyssia is the Architect, which allows her to end turn on a settlement and will fortify it permanently, it also ignores the fortify movement penalty. This makes it so she earns more gold each day for settlements that are fortified. Elyssia has the highest Wits stats when compared to Amber and Barnaby of the same rabbit clan. Her smarts makes her more of an economist in the game than a fighter. Otherwise, she is on even ground with Amber and Barnaby stats-wise.

Ghor has the power of Conduit where in Forests, Spells cost 1 Magic less per current and adjacent forest and Ghor can cast to any forest – even ones not adjacent. Ghor is part of the bear clan where she doesn’t have any one stat higher than what Sana and Brun have. This is a hero where the ability takes precedence over initial stats, and with the ring and amulet choices, can buff where other stats are lacking.

Finally, Sargon has the power of the Veil Gazer, where he can see the top card of each deck as they are put face up during card draw. This is borderline cheating as no other player has this ability or chance to see cards before they are drawn, he’s certainly going to be a divisive character in local and online play. Sargon has the highest Spirit stat to that of Mercurio and Zosha of the same rat clan, but has the lowest Fight stat, making him a stealthy, magic dealing type. His Wits stat is high enough that he will likely win Wits encounters more often than not, making him supremely dangerous. Armello‘s Usurpers Hero Pack is the type of DLC that if you have expended playing the other 8 heroes, and just want someone new to play, you absolutely should grab this pack. This makes for more diverse player selection when online or in a local game. Each hero brings something new to the table, to include clan rings, but the character additions don’t feel entirely necessary. One or two new hero clans would have proved to be more interesting. But in terms of what you’re getting, it’s a slight alteration on the same clan heroes you’ve come to know in the past year. The Usurpers Hero Pack offers a pretty strong line up, but Sargon is the standout in the pack. This is the type of DLC that changes how you play the game, but now how the game is played overall.

A pre-release Steam code for the DLC was provided by the publisher for review purposes.