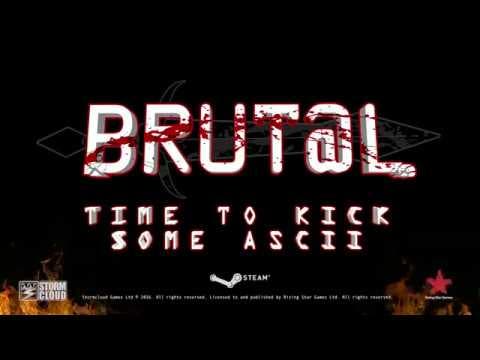 Video game publisher Rising Star Games confirmed today the global release date for the visually striking and critically-acclaimed action game Brut@l. On February 9, PC gamers across the globe can enjoy this re-imagining of the classic ASCII dungeon crawler. A procedurally-generated co-operative and single-player dungeoneering thrill ride, Brut@l fuses old-school gaming with a stunning 3D visual style, creating an experience that is inspired by the earliest of videogame adventures, yet feels uniquely fresh and exciting.

Playing solo or with a fellow adventurer in local two-player co-op, choose your Brut@l hero – Ranger, Mage, Warrior or Amazon – then descend into a procedurally-generated world constructed entirely of ASCII. Your goal? Reach the 26th floor and vanquish the fearsome Guardian of the Dungeon awaiting there.

Battle fearsome creatures as you explore deeper, gain strength and experience, craft and enchant weapons, brew and drink strange potions, risk their effects and level up your hero based on the play style that suits you. Survive for as long as you can and tactically decide when – or if! – to revive your co-op buddy should they fall in battle.

As well as offering extensive single and co-op adventuring with a near infinite number of dungeon layouts and enemy encounters, Brut@l grants wannabe arcane architects the power to get creative with its Dungeon Creator. This intuitive editing tool lets you build, share, play and of course die in your very own dungeon.

“We are delighted to be working with Rising Star Games to bring Brut@l, our humble homage to old-school ASCII dungeon crawlers, back to its spiritual home on PC”, said Frank Arnot, Managing Director at Stormcloud Games.

“Brut@l is an exciting and unique proposition and we are thrilled to partner with Stormcloud Games to be able to bring the game to PC gamers after a successful run on console”, said Martin Defries, Managing Director of Rising Star Games. “It’s a blood-splattered kick off for Rising Star Games’ killer 2017 line-up”.

Developed by Stormcloud Games and published by Rising Star Games, Brut@l will release on February 9 on PC via digital retailers.