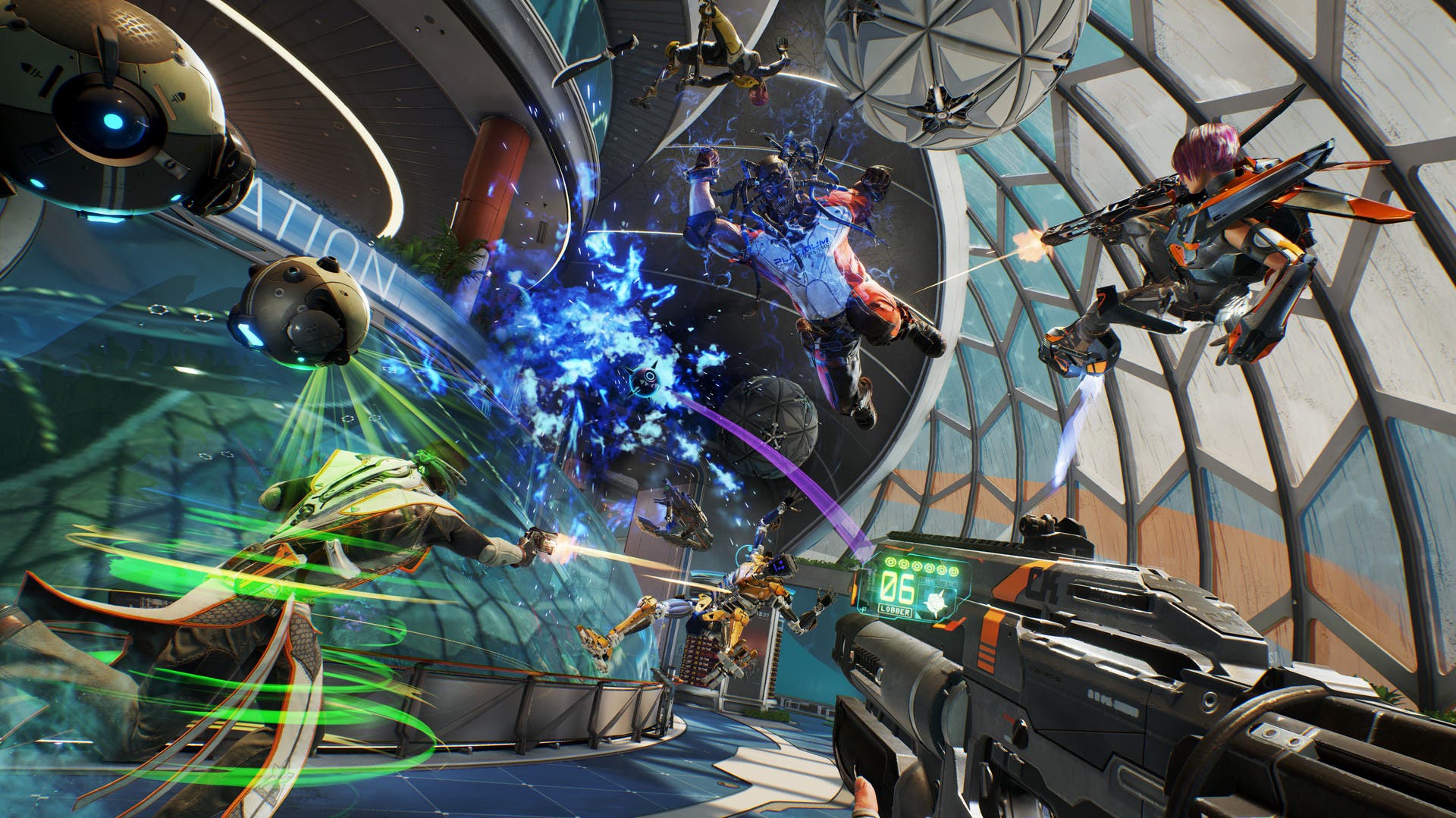 Editor’s Note: This review was written and based on playtime prior to the recently released 1.2 patch

The rise in rampancy from criminals to the need for police stems from our world has to be rebuilt after “The Shattering” destroyed our moon, and gravity on Earth became inconsistent. All the criminals unite to call themselves “Breakers” and law enforcement band as one as “Law”. Beyond that, there’s not much to what’s going on. Most of the lore is hidden within stickers and icons when you hover over them. Perhaps this isn’t the most important element of the game, but the story seems buried otherwise. LawBreakers never emphasizes the Law vs Breakers aspect, it just tends to exist, and I never feel like a cop or a criminal. Thankfully though, that is just a minor quibble as the gameplay more than makes up for the narrative shortcomings.

Playing LawBreakers ruins your common understanding of movement in modern games. Each character is not made the same, but everyone has their unique brand of fluidity and mobility in getting around a map. The use of gravity, or in most cases, the lack of gravity create even playing ground for everyone. You will need to enter or pass through areas without gravity and floaty movement to work towards the objective. An element of LawBreakers that isn’t explained well, or talked about more prominently is that you can shoot behind yourself. Pressing CTRL on the keyboard lets you propel yourself in anti-gravity bubbles faster than normal, especially when you character lacks abilities compared to others. The character roster in LawBreakers features 18 characters which gives 9 characters to each side. There are 9 classes, and each side of the conflict has the same class. Each class is self sufficient and can be supportive. Half of the playable characters are women, and of different ethnicity. LawBreakers if nothing else is inclusive and diverse as its cast of characters. Each character is unique in name and appearance, but what the characters may lack personality or identity, but make up for it in style. Each LawBreakers class has three abilities: movement, weapon and an ultimate. All of these are on cool-downs, and learning how to use them effectively is very rewarding.

For instance, I was immediately drawn to the Gunslinger, and who I currently main. The Gunslinger wields a three-shot burst pistol in the left hand and a revolver in the right. The burst pistol is a 3D printer that prints ammo to reload it, and the revolver is a gun that must be reloaded. Being able to fire these independently is key to the success of landing a shot with this class. From there, it’s using the dash ability (three pips for three dashes) to escape certain death or traverse the map a bit quicker. While no class has dedicated roles, the Battle Medic is the closest thing in keeping a team alive outside of health pickups and stations. The Battle Medic is also very hands-off, they just need to fire their drones at the ally they want to heal and can get back to dealing damage almost immediately. The Enforcer is the most well-rounded class that plays like a generic soldier that is the easiest to get used to. Harrier is all about mobility, and shares similarities to Vanguard except moves in vertical space than horizontal. The Assassin was my main initially, allowing for quick dashes and the ability to shoot with a machine pistol and a quick-stab that closes the distance on an enemy. You can also fire a spring-loaded blade that does damage and gives off an extra projectile. The rest of the classes are what you’d expect them to be, with Juggernaut, Titan, and Wraith rounding out the rest. There are five modes of play in LawBreakers. Oddly, Uplink and Overcharge are very similar to one another – where by you bring a satellite or battery to charge or sync at your base, and stay there for a set period of time to score a point. Blitzball is the most fun, as it has Rick and Morty’s Justin Roiland doing the voice-work on this animated ball. Turf War and Occupy are capture point modes, the latter one makes you chase a single point that changes positions. Why would cops and criminals play a game where a talking ball is to be captured? It seems to lessen the conflict that’s been setup? But thankfully the game doesn’t take itself too seriously despite the background of its origins.

Curiously missing is a server browser, a highly demanded option especially in PC games, and one that Unreal Tournament was known for. That, and the ability to select what mode or map you want to play is absent. There’s not even an option, you’re just at the whim of the server and I’ve seen several matches change modes, but the map stayed the same, or cycled back to a previous map on the next load. It’s not the worst thing in the world, but given the pedigree of what Cliff Bleszinski has worked on prior, you’d think you’d get more choice in what you play. Keep up with the trend in many games, LawBreakers features loot crates that can both be earned and purchased. With each account level you gain, you will have a crate to open. Or you can spend real money to buy more crates to open. There’s nothing egregious here. It’s all optional if you want to buy, and each crate will unlock: skins, weapon stickers, or kick decals to be used. There’s nothing to be gained from them that gives you an advantage over a player or vice versa. Customization ties into this, and is a big part of LawBreakers, and goes a few steps beyond what you find in something like oft-compared, Overwatch. You really feel like you’re making your character look unique when playing. You’ll unlock character skins, weapon skins, weapon stickers, and profile icons of static and animated variety. It just feels so lively to have so much control in your look.

While I was sufficiently able to learn on my own, the included tutorials are really bad at teaching you how to play. The included mode overviews are the best out of the bunch, but the character overviews don’t teach you how to use the characters and in what scenarios. Each of the tutorials are YouTube videos, which, on their own are fine. But inside the game doesn’t make much sense. There is a sandbox mode that lets you roam around and there are key. If there was really any one area to improve upon, it’s all of the tutorial sections. If you gave me the choice between playing Overwatch and playing LawBreakers, I’d choose this. This is a game where any class is helpful and doesn’t have to rely on strict roles to be successful in each match. I do wish the tutorials would acclimate people better into the game, but it isn’t hard to grasp on your own. The modes, classes, and weapons all look and feel the sci-fi part. The biggest crime in LawBreakers is that not enough people are playing it. For what’s here, LawBreakers is a steal at its price, and an absolute blast to play solo or with friends.