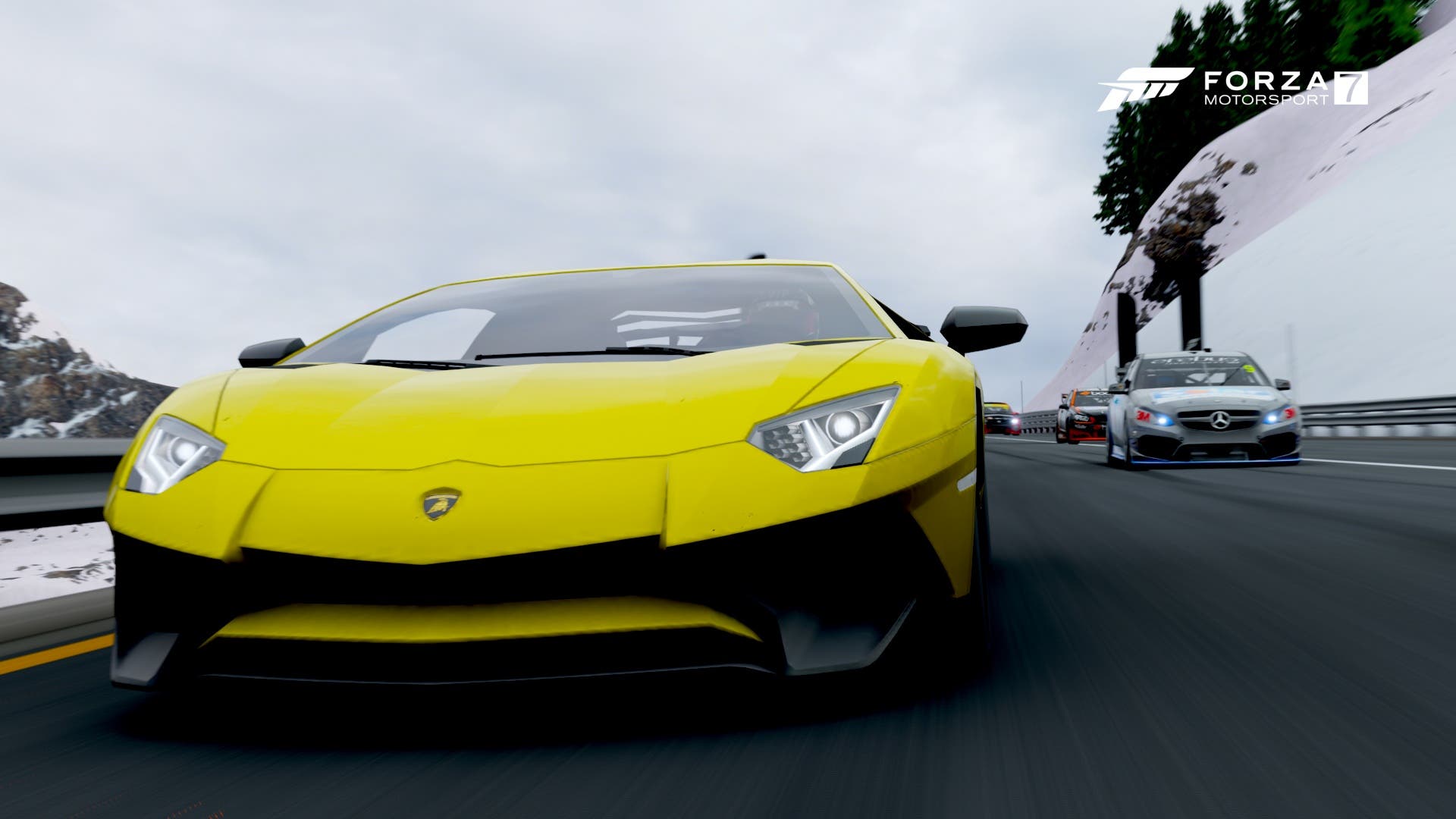 Forza Motorsport 7. I want to love thee, but you make it so hard. For one, there’s the same great Forza you’d expect. Amazing physics, deep customization, Fairly intelligent AI, all that’s there. Yet they stab themselves in the back with a loot box grind and a collection score that hinders the fun in playing the way you want.

The early game of Forza 7 is great. It will suck you in and you won’t notice the oncoming grind. Credits are given out plentifully, especially if you’re connected to the Forza Hub and played previous Forza titles. If you got an upscaled edition with VIP membership, expect and even quicker way to gain credits. But a few races in and you’ll start to notice how irksome their changes this year have become. Turn 10 limits what you can do with your garage. With the car collector score, they push you into buying cars you may not want or ever need. The system grades your car collection and each car in the game has a collection score tied to it. Some cars are worth more than others so they’ll raise your collection score total. The higher your score, the higher rank you’ll move up. With each rank they allow you to purchase higher tiered cars. Prior to 7, all you had to do was make sure you had enough money to buy the car you wanted. It was simple and a fine way to do things, all that you had to worry about was the always exceptional on-track experience. Credits for races were fair and the time spent getting cash was never a real drag. The collection score adds a needless system that forces you to spend credits on cars before you can attempt to save up for cars you may actually want. But if you’re the creative type you could sidestep some of that frustration by making that car into something useful and something that is tailored to you. As with previous Forza titles, you can upgrade your car with parts and customize with new bumpers or wings. Add a few decals here and there and you could turn that ridiculous Nissan, you had to buy, into something more tolerable. Turn 10 has given players even more choice with the option to wear different racing suits. There is a lot to unlock, you’ll find some basic color patterns to something very elaborate. Something like an English Knight or a Mummy. Maybe a Chef or a Ninja are more your speed? The suits are so rad, I hope that if any additional suits are added that they’ll go even further with the crazy designs. Also, how is there not a Master Chief suit in this initial collection?

To actually unlock some of these suits, you’ll want to explore another scoring system within Forza Motorsport 7, your driver level. This one is pretty standard though. The more races you compete in, the more driver experience you earn. As you earn experience, you’ll rank up and with each new rank you’ll get to choose a prize from 3 choices: an amount of credits, a free or discounted preselected car, or a preselected race suit. I felt this to be a good way to reward players rather than being stuck with something you don’t like. The new collection score even plays a factor here. Having a higher collection score rank opens up higher valued or rarer items to unlock. So unfortunately, if you want better rewards, better go spend your money on things you don’t want.

To help you rank up, you can increase your earning potential in each race by adjusting the difficulty or applying Mod cards. If you played Forza Motorsport 6 you’ll know what these are. They are race modifiers that can earn you more cash or more experience by completing a task within the race. Cards can modify various things. They can add difficulty by turning off steering help or forcing you to drive in cockpit only. They can challenge you with 3 perfect passes during a race. They may even give you bonus cash for doing nothing. The cards have rarity, and of course, the rarest of cards tend to have the highest payouts to credits and experience. Unfortunately to acquire more cards you have to utilize another new system in Forza 7, loot boxes. Yes, even Turn 10 has added this arguably popular, money draining, pseudo-gambling, feature to their game. To their credit, you can’t buy in-game credits with real cash yet, but that doesn’t mean they won’t. In the past Turn 10 were happy to sell you tokens to buy cars with real money. That in of itself is a fine way to open up a revenue stream. You don’t block your players from a means to acquire any car that way, in fact you’ve given them a second option for those with disposable income. But Ed, if you can earn loot boxes with in game currency, what’s the big deal? Just race more and earn that sweet sweet cash right? Well yes, technically. But the further you progress in the Forza Driver’s Cups, the more you notice that the race payouts are very thin. With my difficulty level I would average around 30k-40k credits for a win. So to compensate for that you’ll want to use cards. With some of the better cards and VIP bonuses, I would net something closer to 60k a race. But those cards have limited uses. You’ll have to buy more blind loot boxes to get more cards, which means you have to spend that money you’ve earned to do that. Taking away the option to save up for a car you may actually want. Or buying a car you may actually need to increase your collection score. That is unless you go for the best loot box that will include chances to win a rare car, rare cards, or rare race suits. Which by the way, seems to be the only way to earn the rare and interesting racing suits. The loot boxes start somewhere around 30k for a chance to unlock basic mods while the best boxes with chances for legendary stuff will cost you closer to 300k-400k. Just doing the math and you can see how bad of a grind this system will have you do.

The new systems ruin a lot of the enjoyment that Forza Motorsport once had. But the racing is still incredible. I had mentioned earlier the Forza Driver’s Cup and that’s actually a nice way to do a Forza career. It’s a campaign organized into six championships. Within each championship are a multitude of races to choose from. They range from multirace tournaments to one off special races. Each race has a, wait for it, a point based value associated with it. Each championship requires you to collect a certain amount of points to complete. So if you want to finish the championship faster, just do the few races that earn the most points and move on. As you do though, you’ll run into the issue where you may not have a compatible car for a race. So like any standard racing game, you’ll have to buy one. But here’s the kicker, if the car you want to use is outside your car collection score, you won’t be able to use it for that race. Or even worse, you wont have the option to buy any of the compatible cars because you’re too low a collection score. So back to the grind of getting cars you don’t want just to progress further. Then finally getting the option to purchase the car you actually want, so you can complete a cup. Some of the one off races in each championship will award you a car that may be able to be used for another race in that same championship, so they do throw you a bone.

Multiplayer is still an important part of the Forza experience and included is the split screen racing and online racing. In both of these modes you can use rented cars if you don’t have one that’s needed but you won’t earn experience or credits that way. It’s not so bad in split screen racing as you’re probably doing that to have fun with a friend. But in online matches, it makes it a bit of a chore to find races you can earn money in. Especially early on with the premade race hoppers. If you don’t have those cars or class, well tough luck, no money for your race. Rivals are back and they’re the same as with the previous Forza titles. Preselected races with preselected cars. Beat the fastest time and move up the ladder. If you have competitive friends, this is just as fun as it’s always been. With all these new systems, it distracts from how great Forza is to play and how gorgeous it is to look at. The dynamic weather is magnificently done and the night races are a hoot to race in. You can feel the road surface changing to the weather and your car responding accordingly. It’s such an amazing game to drive. It’s sad that there are now credit draining hoops you have to go through. New level restrictions placed upon you; creating this vision of a roadblock keeping you from playing a Forza game your way. Not something Turn 10 has forced upon players in the past. Then there is the ever looming threat of those pesky loot boxes. Forza Motorsport is my comfort food, my mac and cheese if you will. It always has been. It’s sad that I have to tear into extra layers of packaging before I can enjoy my meal this year.