You don’t find many true-to-life racing games for Nintendo consoles. Many tend to fall into the arcade spectrum, let alone use any actual licensed cars. Gear.Club Unlimited brings a grounded racer to the Nintendo switch while still maintaining an arcade feel. But does that make this game any good? Is it any fun?

The short answer to those questions is meh and in spurts. The game isn’t terrible but its mobile roots show hard. The physics aren’t the greatest and the graphics are middling. Progression can get boring and the car customization leaves a lot to be desired. Gear.Club Unlimited does a great job of making you believe there is more to the game than meets the eye, whether it’s through screenshots or the developer’s pedigree; looking at screens alone might lead you to believe that this could be Forza Horizon-like in its presentation. It’s not. Knowing that Eden Games is the developer behind this title might give you the impression that you’ll be playing something like their Test Drive: Unlimited games. You won’t.

First thing I noticed is that the cars have this mobile look to them. Because of the lack of power that most mobile devices have, the cars in these games tend to have sharp edges. Corners don’t look as rounded as I’d expect a few of the cars to be. I’m not the one to ask whether or not the Switch can handle better models or lighting, but from experience with other Switch titles, I would make an educated guess that yeah it could handle Xbox 360 or PlayStation 3 levels of detail. Gear.Club Unlimited doesn’t reach that point. It definitely tries with some upgraded lighting from the mobile version and a better depth of field effect. Unfortunately the world of Gear.Club is bland and each area you race feels uninspired. I never felt as if I were a part of the world but rather placed onto a toy car track surrounded by a diorama of the land.

If you were to look at the map of the world in Gear.Club you might get excited, thinking that you’ll be able to drive around this large area. But again, it’s nothing like Forza Horizon or Eden’s own Test Drive: Unlimited. Sadly, you never drive to any location, you only select which marker to go to. It’s no different than picking your options out of a menu list, just gussied up a bit. The game is set up in the mobile style, in that you have to earn stars to unlock more races and reveal more of the map. You can earn a maximum of 3 stars in each race and you are able to replay races to earn more cash. As you progress through the map, you’ll open up more dealers to buy cars from and different race types to engage with.

Tracks are mostly point-to-point with a few lap-based races peppered in. To its benefit, the races are never that long. Most I’ve encountered hit around the 2 minute and under mark. Because of the quick races, you’ll find yourself in and out of them and earn cash fast. Sit and grind a high payout race and you can easily afford any car you want. A far better way to play than the mobile version’s micro-transaction and timer methods. Granted the mobile version is free-to-play while you’re paying $49.99 on the Switch. 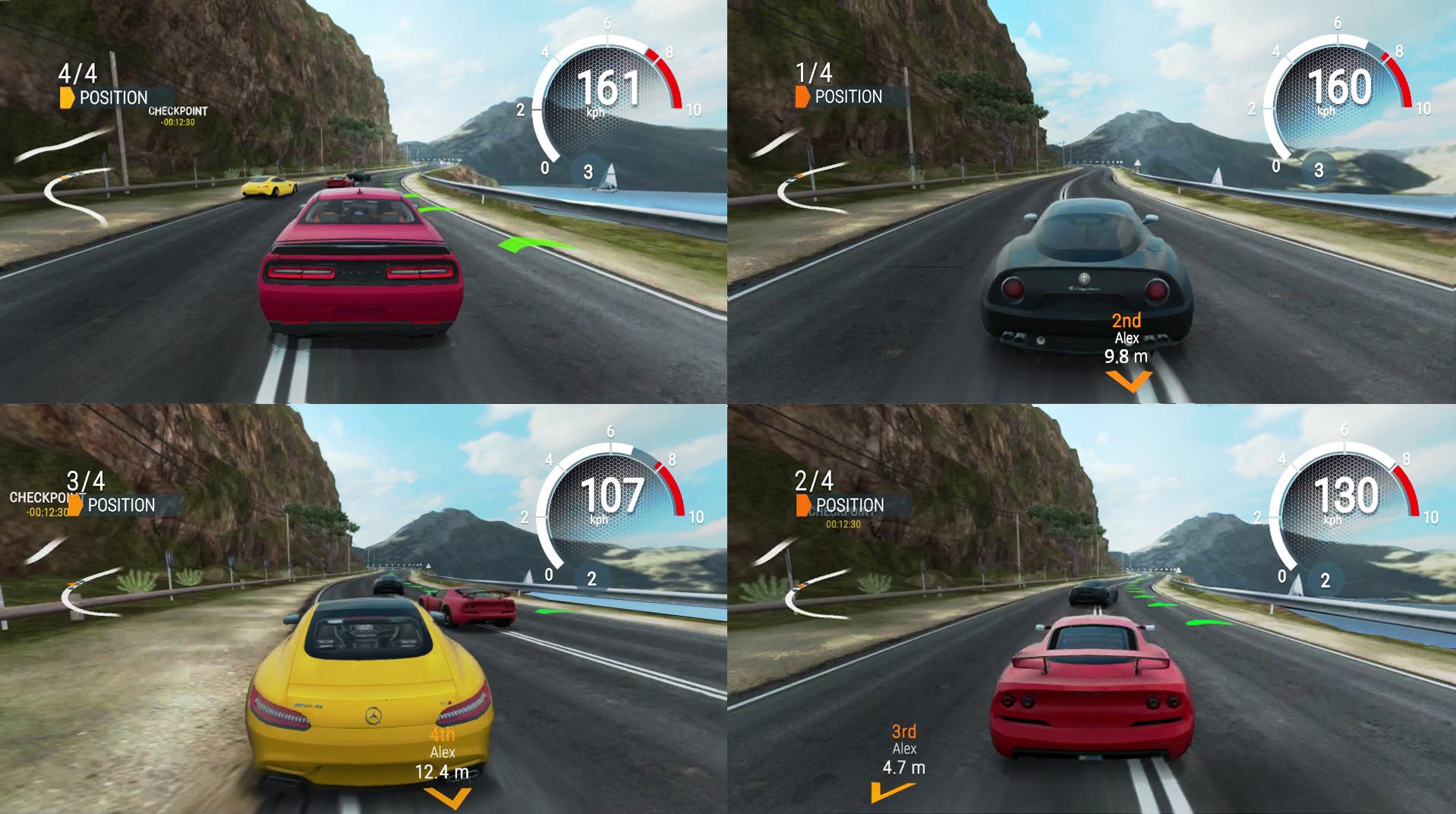 Because you can get in and out so quick, you’ll find that leveling up is rather fast; the game’s progression flows. The game isn’t very difficult either, the AI isn’t very smart and the cars tend to stick to a line. Even cranking the difficulty up didn’t affect much. I was racing with the professional setting where all assists were minimal to none and I rarely ever found that I would have to repeat a race. Even though Gear.Club is in that arcade realm, the driving isn’t enjoyable. It commits one of the racing game sins, cars drive like they have a pole stabbed through the middle. The car’s rotation going around corners feels unnatural and lends itself to want to drift. The tail end will slide out and will rubber band itself back to the center position on corrections, leading to some nasty fishtailing. No matter the car I drove, this issue was there and wasn’t that enjoyable to play. I will give kudos to the team for their implementation of a rewind feature though. It functions exactly how you expect a rewind to work; you can rewind to the exact spot you want to start on. Unlike Forza where the rewind sends you back to a pre-determined point, Gear.Club gives you the freedom to pick the exact point in time where you made a flub and try again.

The downside to Gear.Club Unlimited being on the Switch, versus an Xbox or PlayStation, is that the Joy-Cons don’t have full motion triggers; they’re just buttons. You’re either giving it full throttle or no throttle; same with brakes. It’s not the game’s fault by any measure but does make it difficult to be precise when whipping around the tracks. Even if I didn’t enjoy the driving, it was in short enough spurts that I would be able to experience new track layouts and go tinker with my car customization more often giving me the motivation to keep playing.

Speaking of the customizations, the whole build your own garage mechanic is cool. Something that I’ve not seen done before. To upgrade your car you need to unlock and purchase plots to place in your garage. These plots will be things like a paint-booth or an engine performance lift. By placing these in your garage, you get access to upgrades to increase the rank of your cars. Better engines, brakes, tires, etc… it’s something minor if you think about it but being able to move around and design your own layout is neat. I could do without the dragging of your car overtop of the plot you want to use but it’s not a big deal.

Within the customization, you can open up a variety of cosmetic mods. What’s interesting here is that not only can you change things like bumpers and hoods, but you can modify certain pieces on them as well. Choose the hood with a scoop. You’re then given an option to change the style of that scoop and options to add various vents to the side or not. The level of customization is fairly deep but still quite limited in certain aspects. The Mustang, for example, you could count how many variations of each part on one hand. The system leaves you wanting more, even after upgrading the body shop to a higher level unlocking more parts.

There is multiplayer in the form of split screen and that runs fine but you’re online options are left to a daily league race. They’re basically time trials against ghost opponents so no actual online play is in the game.

Gear.Club Unlimited isn’t a terrible game by any means. It just falls short. I’ll be honest in that I was expecting something more polished from the studio behind the far better Test Drive: Unlimited. Maybe if this sells, a sequel would follow that formula more. At $50 bucks though, I would pass. The game has it’s roots too far into its mobile sibling and even removing all the timers and microtransactions, $50 doesn’t feel like a good deal. Can the game be fun, sure, and being that it’s the only game of its kind on the Switch right now it’s serviceable. My recommendation though, go download the mobile version and see if you enjoy the physics. If they resonate with you then I would say give Gear.Club Unlimited a shot. Just maybe wait for a sale.