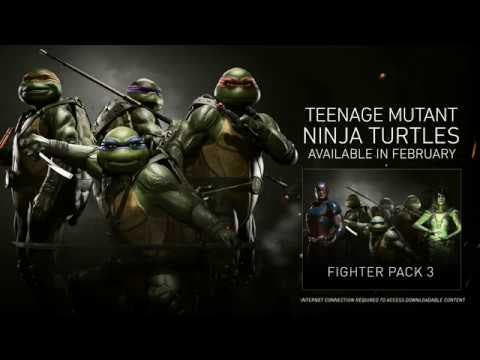 Out from the sewers, the Teenage Mutant Ninja Turtles surface in Injustice 2 on February 13th

Today, Warner Bros. Interactive Entertainment and DC Entertainment unveiled the first ever gameplay trailer for the newest, totally radical addition to the Injustice 2 roster: Kevin Eastman and Peter Laird’s Teenage Mutant Ninja Turtles. The trailer gives players a first glimpse at how the Heroes in a Half Shell will play as four distinct characters through Injustice 2’s unique gear customization system. By equipping one of four accessories – swords, bo staff, nunchakus or sais – players will be able to change their character loadout to play as Leonardo, Raphael, Donatello, and Michelangelo.  Each will wield their own unique move sets, character powers and special moves. In online and tournament modes where specific loadouts are unavailable, players will be able to select each individual Turtle from the character select screen.

The Teenage Mutant Ninja Turtles will arrive on Feb. 13 for players who have purchased the Injustice 2 Ultimate Edition, Injustice 2 Ultimate Pack or Fighter Pack #3, and will be available as a standalone purchase beginning Feb. 20 from the PlayStation® Store, Xbox Store, Steam, and Microsoft Store for $9.99.

Developed by the award-winning NetherRealm Studios, Injustice 2 features a massive roster of DC Super Heroes and Super-Villains and allows players to build and power up the ultimate version of their favorite DC characters. The game is currently available for PlayStation 4, Xbox One, and PC via Steam and the Microsoft Store, with DLC characters Red Hood, Sub-Zero, Starfire, Black Manta, Raiden, Hellboy, The Atom and Enchantress available now on console and PC. Injustice 2 mobile is available now for free on iOS and Android devices.