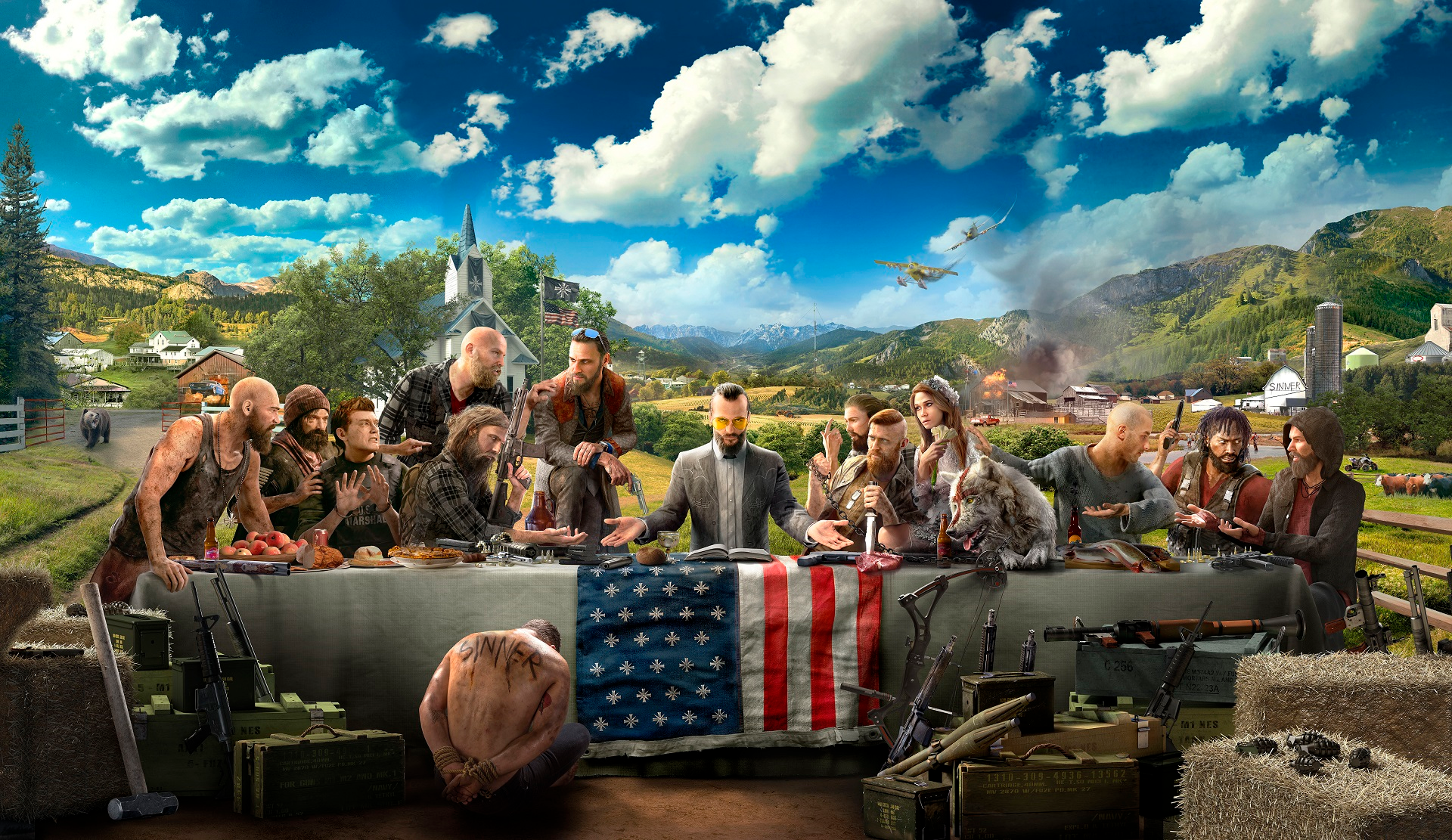 Montana is an unlikely place for a videogame setting, but in Far Cry 5 it is hard to think of anything more fitting. Taking place in the fictional Hope County, there’s a lot of big sky to traverse and experience. Almost from the beginning, you’re free to go anywhere you please and do things in any order. You’re never limited by what missions you can take on. This is an open-world, with very little linearity. With that, Far Cry 5 is an absolute treasure state. 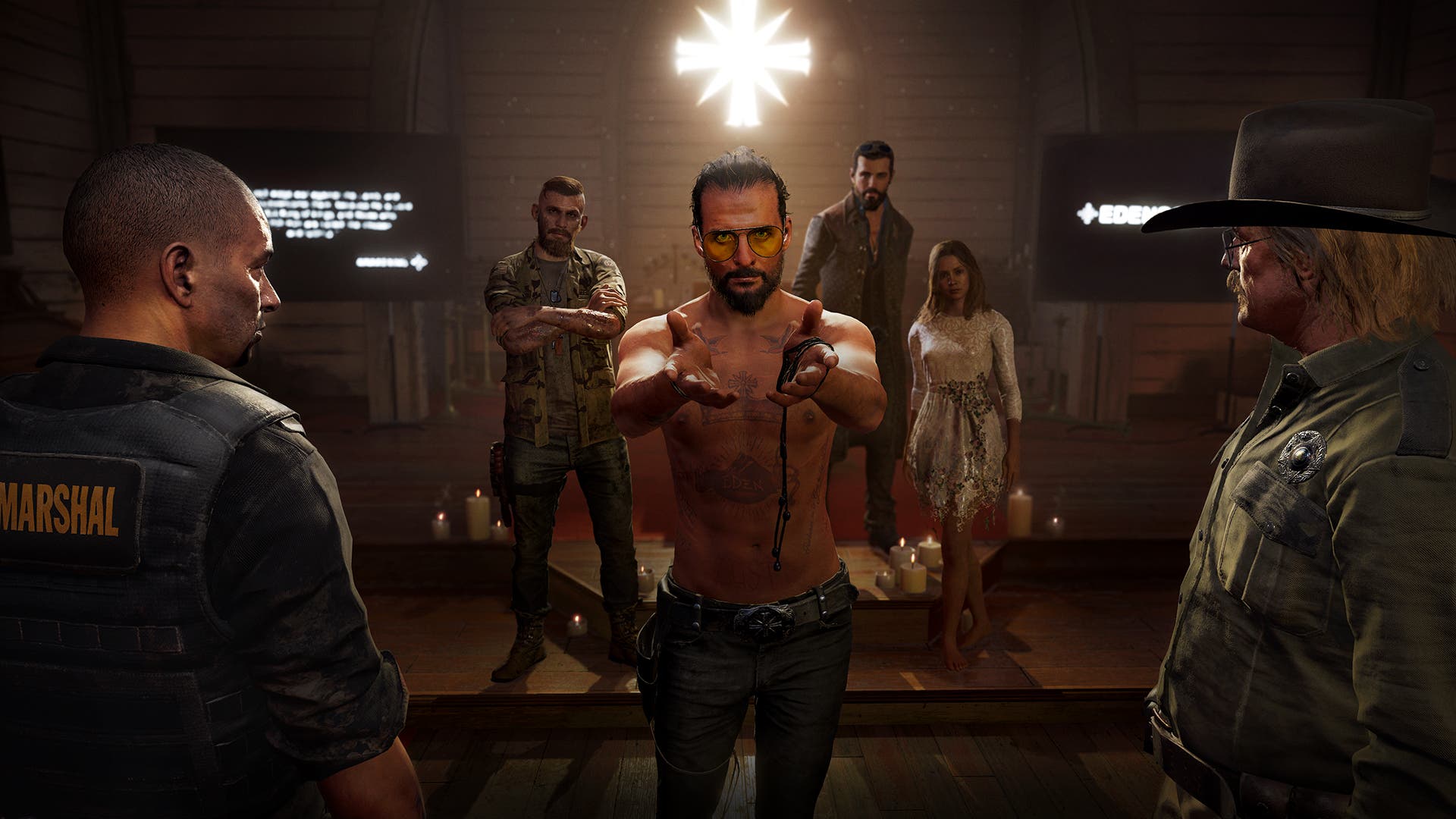 Ubisoft’s portrayal of past Far Cry villains have been met with disappointment. Far Cry 3‘s Vaas was insane and terrifying on his paradisaical island, who was removed far too early in the game and his replacement was nothing worth remembering like he was. Far Cry 4‘s Pagan Min was a tyrannical megalomaniac, who lived in his palace and drove the country on fear. In both games, things were said about them or said from their mouths to depict how bad they were. Joseph Seed on the other hand, the cultist leader and antagonist in Far Cry 5, is bad because of not only what is said, but what is shown for your own eyes to witness. He’s a man who gets his hands dirty, and his convictions are believed to the core, making this dude someone truly worth fearing.

From the melancholy, down home music of Far Cry 5‘s menu, you can tell that this part of the state of Montana has been better. Hope County is unfortunately the home to the doomsday cult known as Project at Eden’s Gate, or PEG for short. The locals who oppose the cult call them “Peggies” in a derogatory way as it’s all they can do to combat them, until you came along. Rather than named hero, you take on the role of a male or female deputy who’s part of task force out to arrest Joseph Seed. When that goes awry, you escape by the skin of your teeth, but not everyone was so lucky. This sets in motion the events to take down Project at Eden’s Gate cultists, including any followers to these so-called leaders. Your character doesn’t have a voice, but it does have a look, and one you can craft from the beginning, and in more finite detail later. Gender choices are final once initially chosen, but clothing and hairstyles can be modified as often as the wind changes. 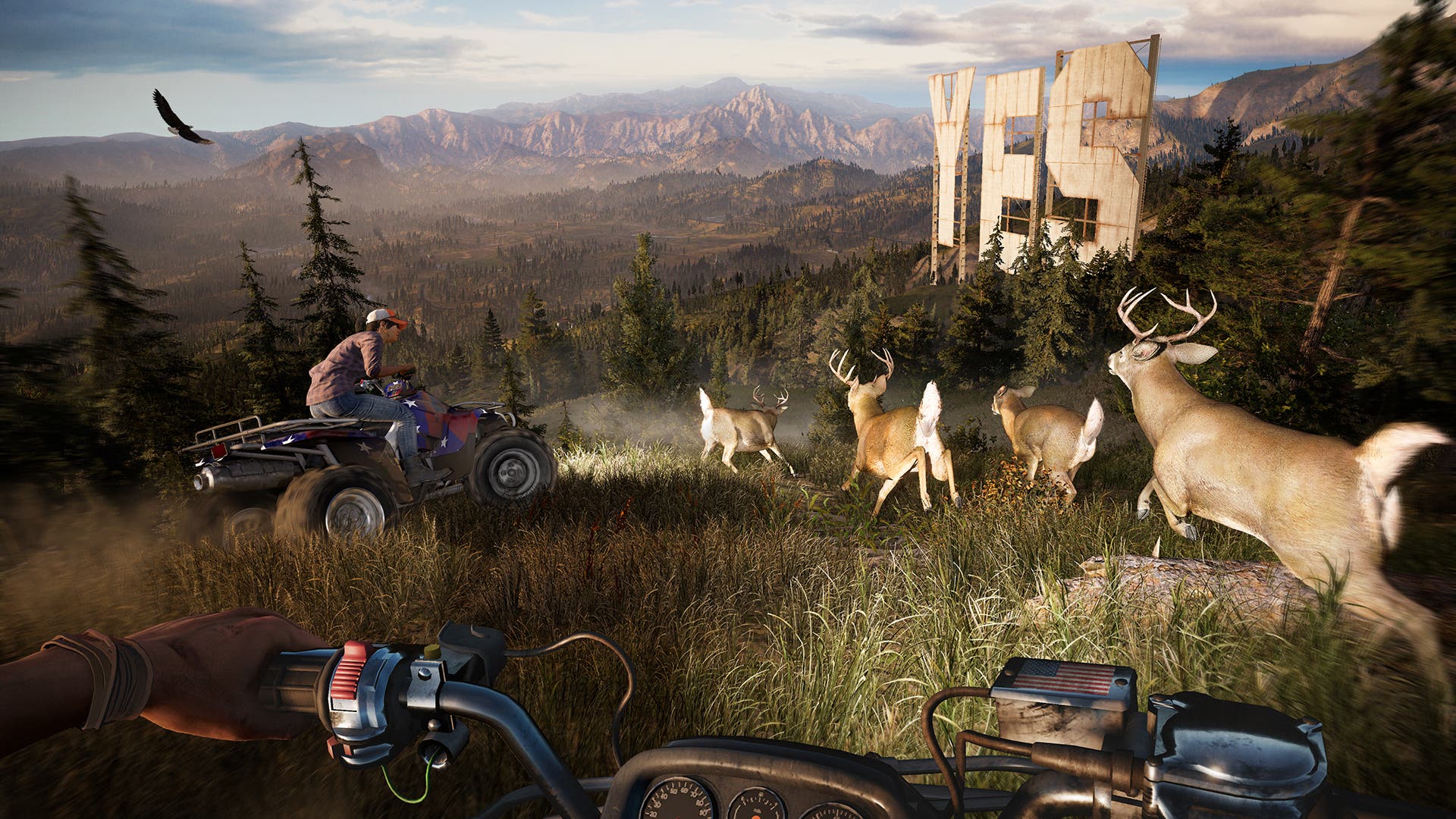 It’s not long after the introduction to the game’s mechanics that you’re set free to do as you please and go where you want in Hope County. Far Cry 5 is big step forward away its predecessors, as this steps out from the shadow that Far Cry 3 created and Far Cry 4 stood in. Some of the biggest changes come in the removal of elements that are better integrated in different ways. For starters, there’s no minimap – much like how Assassin’s Creed: Origins ditched the minimap, so has Far Cry 5, opting for a more immersive and a “learn to read your surroundings” approach. Next, there are no more towers to climb. While I applaud Far Cry 4‘s puzzle platforming towers, they are all gone here as means to uncover the map. Towers are present in other forms to do other tasks, but in order to uncover the map, you’re encouraged to explore the world to fill in the fog of war. Next, crafting has been removed. You no longer have to hunt animals to craft better equipment, that is now handled thanks to revamped perks system. Streamlining everything into a challenge system, perk points are earned by playing the game rather than through an experience system. As such, hunting is now treated as the sport that it is in America rather than a necessity for survival. At least when hunting there’s no unnecessary gutting and skinning animation. These changes are meaningful and make the experience refreshing.

Hope County is a large place, and like Tom Clancy’s Ghost Recon Wildlands, there’s sectors controlled by each of Joseph Seed’s brothers and sister. There’s not nearly as many bosses to dethrone, but these heralds as they’re called, must be dealt with in order to restore the county back to the way it was. Each territory has its own distinct look, and set of objectives. Completing missions, whether they be story or side missions, as well as blowing up cultist properties, and liberating outposts will increase a meter. There are stages to the meter, in one territory, the second stage means they send out a capture party to come get you, another will be an air raid, and the last will be taking you on drug-induced trips. Achieving higher tiers of liberation as a means of progression does not make things easier for you. In fact, the opposite happens: Roadblocks come up on the road, air patrols become frequent, and cultists are generally more aggressive to try and kill you. The more you push them back into a corner, the more Project at Eden’s Gate will fight back. This tug of war is really engaging until you push hard enough to trigger a boss fight which are unique and unorthodox events all their own. 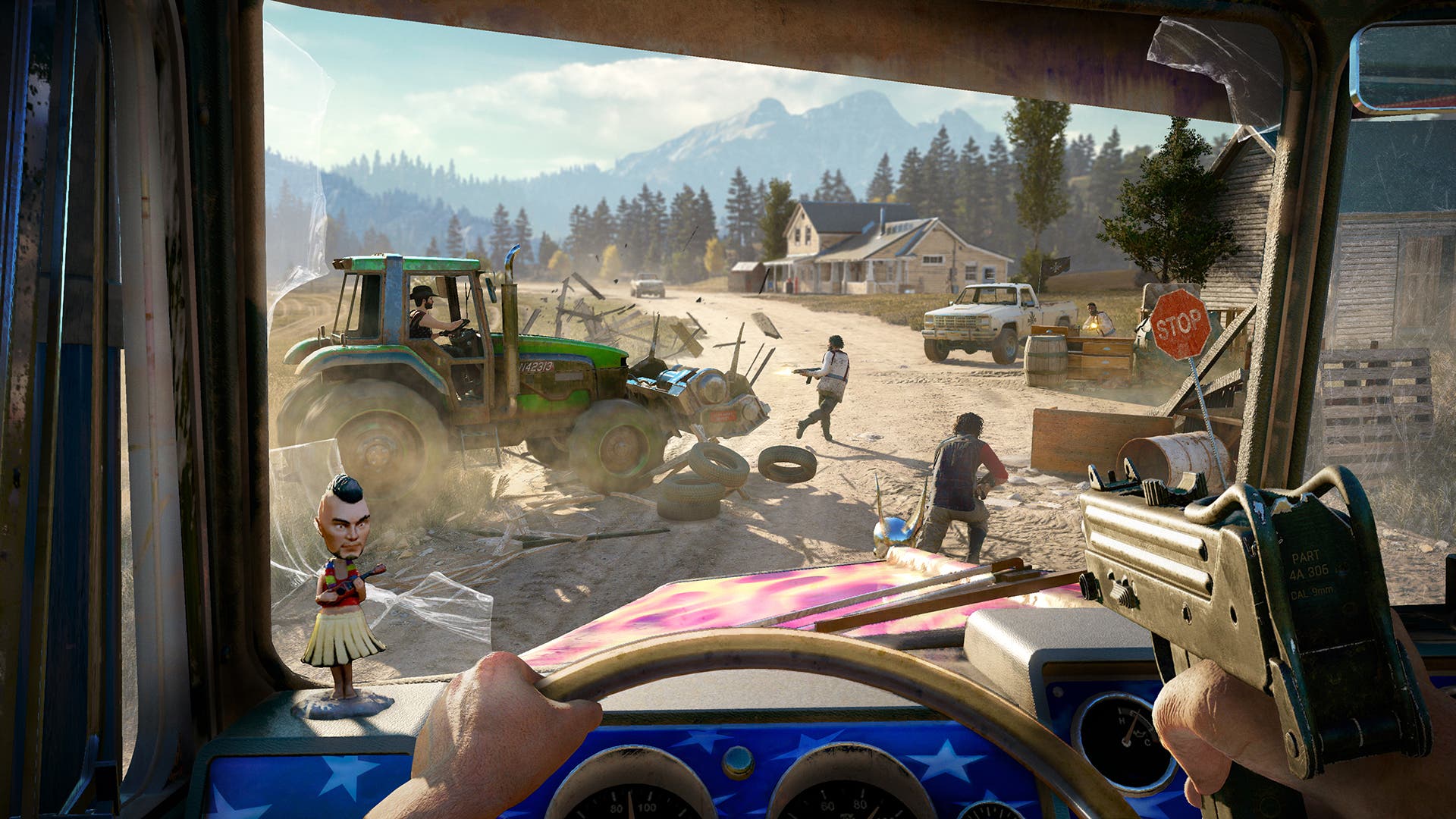 Far Cry 5 boasts a wide variety of enemies to dispatch. You still have your flamethrower-toting and heavily armored baddies you know and love, but there are others like angels who are high on bliss and will come after you without a doubt in their mind. You also have snipers and knife-throwing enemies present elsewhere, but the archetypes you’ve seen before feel different. The common link between all Far Cry games is drugs, and in Far Cry 5 the compound drug called ‘Bliss’ is something you’ll frequently come into direct and indirect contact with. It’s a hell of a drug, and is the reason why so many people have come to following this cult. Hope County feels a lot like Columbia of BioShock Infinite, ran by people with conviction and reasoning that people blindly follow that are clearly ravings of a mad man.

Along the way you’ll encounter special contacts who befriend you and can be used as a “gun for hire”. There’s even some animals you’ll come into contact with such as a dog, and a bear named “Cheeseburger” who become “fangs for hire”. These partners act as allies who can revive you should you get killed instead of having to reload from the last checkpoint. These allies can die, but only temporarily. If downed, you can revive them. If the timer expires before you reach them, then a cooldown happens until they are available again. There’s nine partners in total. To answer any questions on what happens when you ride in vehicles, all human allies will ride with you, but the animals do not. Healing yourself is simpler this time around, as you regain health on your own and no longer in pips – and you don’t have to witness those grotesque healing animations, you’re more civilized.

The vehicles in Far Cry 5 are the best handling of the series. Flying actually gives you real vehicles like planes and helicopters, you’re not flying just a chair and rotor with an altitude limit. There’s also boats and vehicles you essentially own and customize that make you feel a part of this resistance. Driving cars, trucks, and vans all control really well and can drift that makes you feel cool while doing it. Now there aren’t many options, but you have two kinds of radio stations to listen to: Eden’s Gate or Classic Rock. You’ll likely favor the classic rock for driving to, but Eden’s Gate is nothing if not stupefying to hear.

There are some really funny standout moments in Far Cry 5. You’ll be gathering testicles for the local cook who still wants to host the “Testy Festy” despite the kibosh the cult has put on the event. Or when you work with the local conspiracy theorist who believes aliens exist, and help him transcend this world just shows the diversity of its cast of characters. The seriousness of the goings on in the county subvert the humor, but they coexist rather well. When dealing with the cult, the game rightfully does not mess around, and plays it straight. 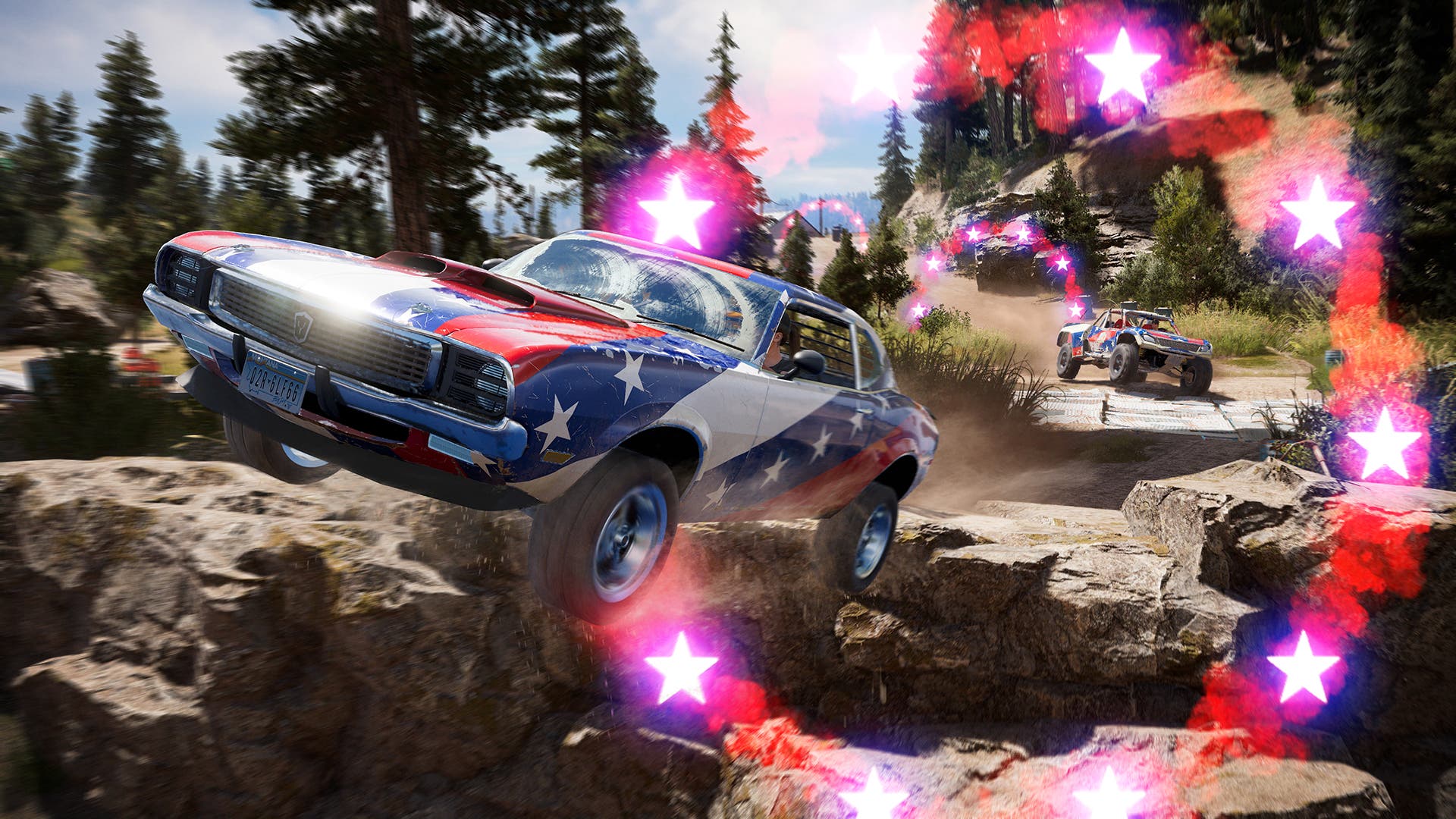 While you don’t talk, you do converse with NPCs all the time. And they all have something to say, whether it be cluing you into a secret stash, which are small environmental puzzles to access the doomsday prepper bunkers, or telling you of someone to talk to that will give you a mission. These people care about the place they live in, and this game feels close to home, making you feel like the things you’re doing actually matter. This is the first game in the series to take place in America, and while it is an unknown for the series, for most who will be playing the game will find this very familiar and relatable.

There are tons of activities in Far Cry 5 to take part in. The most lax of them are hunting and fishing, and can be the most lucrative when you go to sell the hides and your catches of the day. The more dangerous activities involve disrupting the cult’s work, discovering the hidden stashes, or finding collectibles out in the world. At no point did I ever feel worn out by the sheer amount of things to do, and I’m driven to complete this 100% because I like spending time in this fictional place. 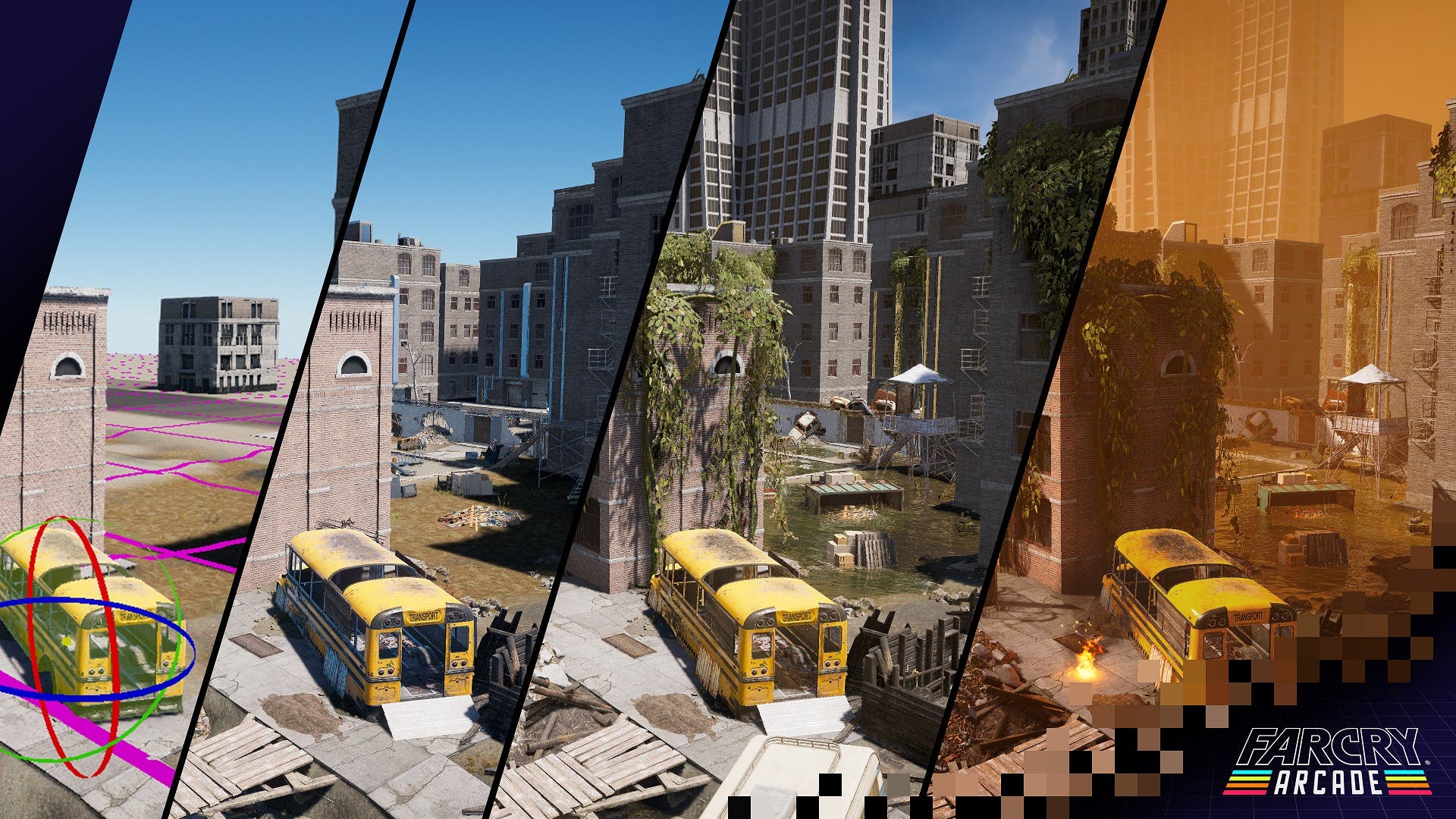 In the story mode, there are lots of ways and places to start playing Far Cry Arcade that transitions you out of the campaign, but the NPCs surrounding the arcade cabinets strewn about the world lay it on a bit thick. It’s clear Ubisoft wants you to play this, and rightfully so. It’s really fascinating and entertaining. Rather than play as a traditional multiplayer game, Ubisoft developers and users can create content of solo, co-op, or PVP events. You can vote, download, and share these maps to increase their popularity. What’s there for launch is solid, but it’ll be really interesting to see what the community does with the editor. 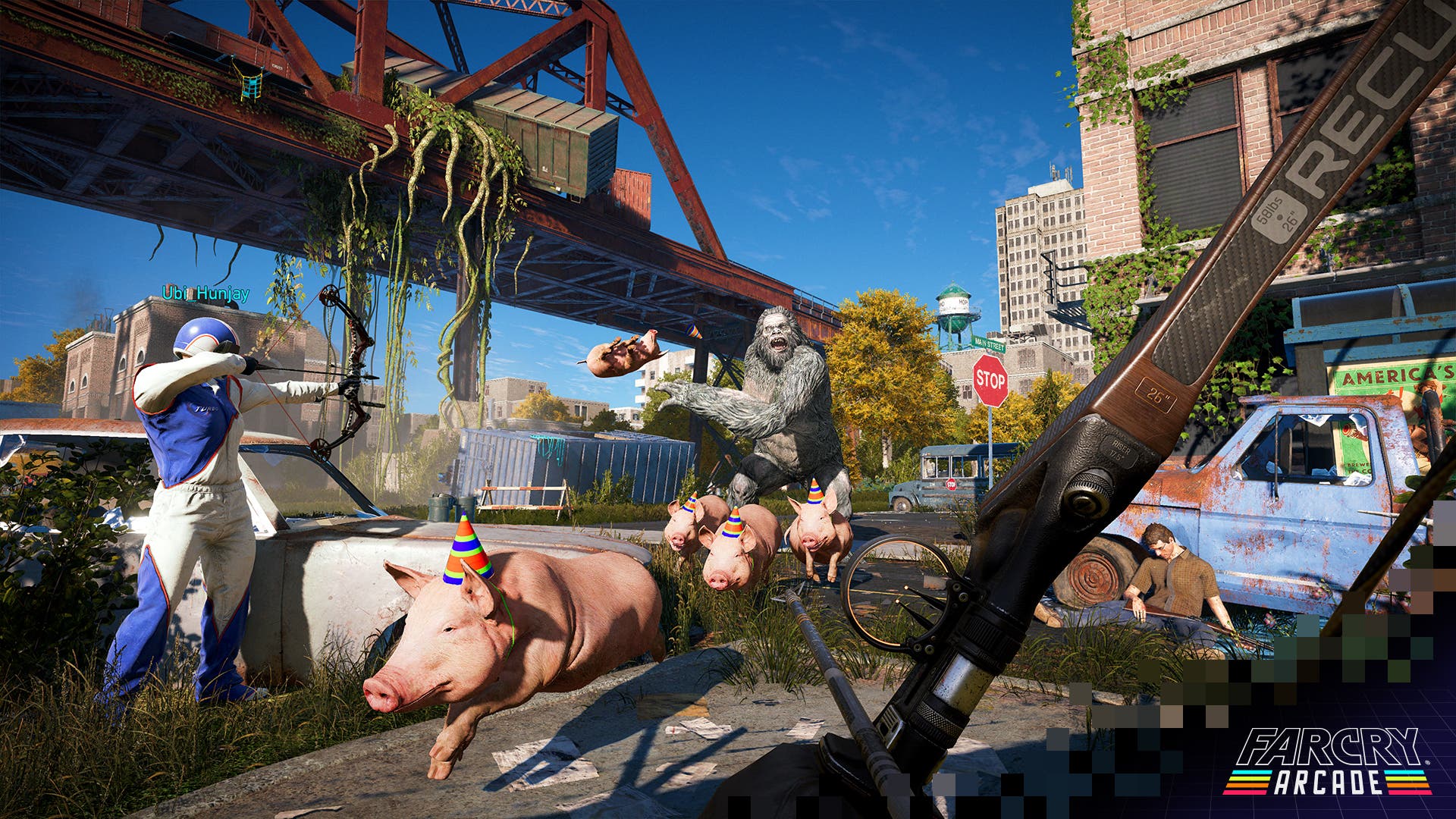 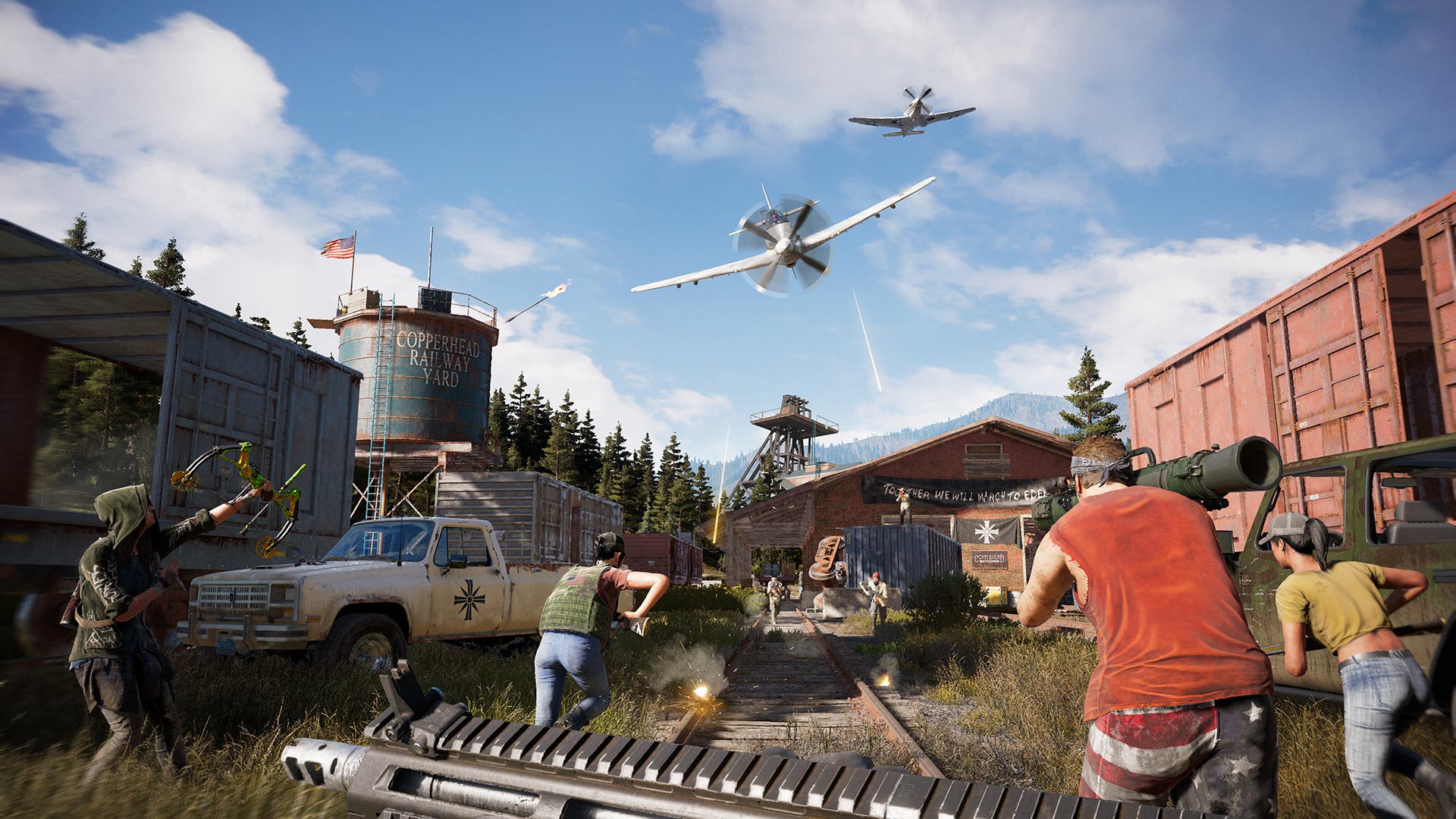 Hope County, Montana is the American Dream turned Nightmare. Far Cry 5 is dense with activities, people, places, and events that are never overwhelming, but wrack you with indecision as to what to do next. While Far Cry as a series still struggles with the juxtaposition of its humor and seriousness, it manages to do this well enough to not let them get in the way of each other. Far Cry 5 is a shining example of how to revitalize the open world, as this is the best realized game in the series to date, with a convincing villain and a tale to match its tone. Far Cry 5 will make you a believer.