Escape from Monkey Island is now available exclusively on GOG 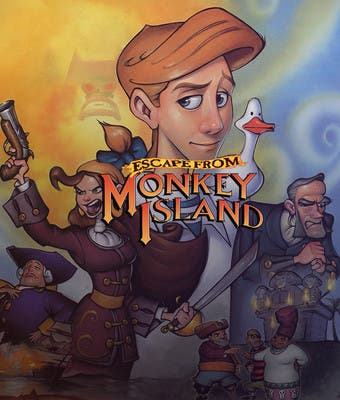 JUNE 19 – Escape from Monkey Island is now available, DRM-free and only on GOG.COM – the PC gaming platform where classics are saved from oblivion.

The first 3D iteration of the beloved point-and-click pirate adventure series has finally surfaced on PC digital distribution waters – for the collectors, and for long-time fans of Insult Sword Fighting. Escape from Monkey Island once again puts you in the boots of self-proclaimed mighty pirate, Guybrush Threepwood, as you embark on a hilarious adventure to save the pirates’ unsavory way of life from the curse of late capitalism.

Explore the Caribbean and return to the titular Monkey Island, meet old and new friends, face off your enemies in Monkey Kombat and have tons of laughs while saving the pirates’ land from tourist-friendly venues like StarBuccaneer’s and Planet Threepwood.

Escape from Monkey Island, one of the long lost PC gaming gems, is available once again thanks to Disney, Lucasfilm and GOG.COM – tuned up and restored to run smoothly on modern machines and completely DRM-free!

The 25% series completion discount will be available indefinitely, while discounts on individual games last until June 26, 1 PM UTC.