Hotel Transylvania 3: Monsters Overboard is based off the just released into theaters “Hotel Transylvania 3: Summer Vacation” from Sony Pictures Animation. Instead of replaying the events of the movie in videogame form, Monsters Overboard instead takes a sidestep from those events in which the cast gets marooned onto a series of islands after the hotel cruise liner crashes. While the premise saves the game from spoiling the movie, the game spoils itself from being a fun experience, and is something kids won’t entirely be enjoying. Hotel Transylvania 3: Monsters Overboard sees the cast stranded on desert islands after a nasty storm that diverges from the story of the movie, and there are compounding issues before they can leave. The main goal is to collect Neptune’s Compass in order to complete the game. But along the way, you’ll have to complete tasks like saving Drac’s friends: Frankenstein, Murray, and Wayne. The threats to their livelihood is nonexistent, but they’ve got themselves into a pickle, and you have to get them out. Though, all that’s required is finding four of something to get each one of them out. While the act of finding that thing isn’t so simple.

Due to the conceit that the movie and main characters are vampires, you can’t be during the day, only at night. The game features an in-game timer of 10 minutes to play through the night to complete as much as you can before you have to return to the ship during the day, and come out the next night. While the idea is smart, the practicality isn’t. This is a smart way to keep kids at bay from playing the game in longer spurts. You soon realize that playing those ten minute sessions back to back is the game keeping you from being saturated in its own tedium. 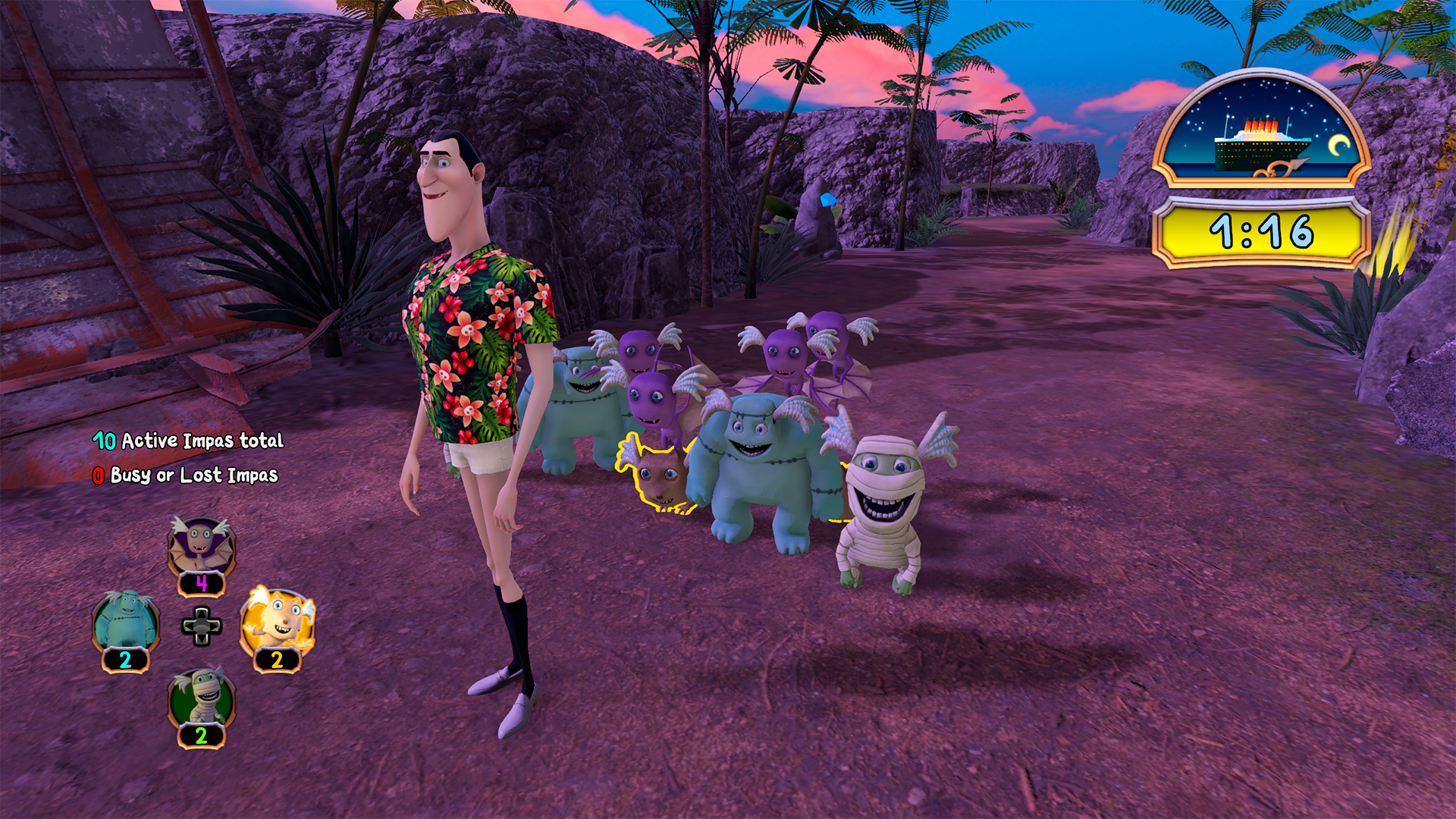 The game plays most similarly like Overlord, or its inspiration before that, Pikmin. You possess cute little beasties called impas, to which there are 4 different types that have different abilities. The impas can be controlled rather simply, to follow you, stay put, or attack a target of your choosing by sending single units or all units towards it. Drac and Mavis do not fight, and so all attacking is done via the impas. Impas can be “killed” and thus losing your army. If you’re reduced to zero impas, you must end the night early and come back again.

You play as Dracula (“Drac”), or Mavis – male and female equals, only using their abilities of mind control to control the impas. What’s disappointing here is that both characters in the movies have powers beyond this one trick, as they are . These characters can actually do almost everything the impas do by themselves, as they can change from human to bat form in a blink. This makes the game one note in what you do and how you play it, and isn’t fun in long stretches even with its imposed time limit.

Treasures serve as passive perks. The first treasure lets you get an additional impa to start with, that no matter how many you might accidentally lose during a session, you’ll have a new maximum that you start out with. It makes exploration worth it to find them as you can make things easier as you progress.

For a licensed video game, none of the original voice actors of the movie are here. There’s some solid efforts by their stand-ins, but anyone who knows what they are supposed to sound like will notice that they are clearly not them (aside from viewing the credits to confirm such things). Hotel Transylvania 3: Monsters Overboard is a budget title to coincide with the release of the movie and doldrums of summer. Having that companion videogame to the hotly anticipated movie is smart, but executed so poorly here. Hotel Transylvania 3: Monsters Overboard does a good job at making sure not to spoil the events of the movie, which can be applauded. Beyond that, the game itself is so uninspired and uninteresting that my kids couldn’t stick with it long. They enjoyed playing it and seeing their favorite characters, but progression was hampered by the time limit despite the game saying you can play at your leisure. There’s nothing broken in the game, but it just simply isn’t good enough or worth much of your time to warrant an immediate purchase at this time.