MOTHERGUNSHIP is one of my favorite things to say as of late, it sounds like a curse word, but isn’t actually anything vulgar. It is a very apt description, and is a game that has elements of roguelike mixed with being a bullet-hell first-person shooter. The developer’s prior game, Tower of Guns was a game you liked or didn’t, but is the evolution and improvement of that game in so many ways. MOTHERGUNSHIP has a crafting system to build your own guns, and alongside procedural generation make this a wholly unique shooter. 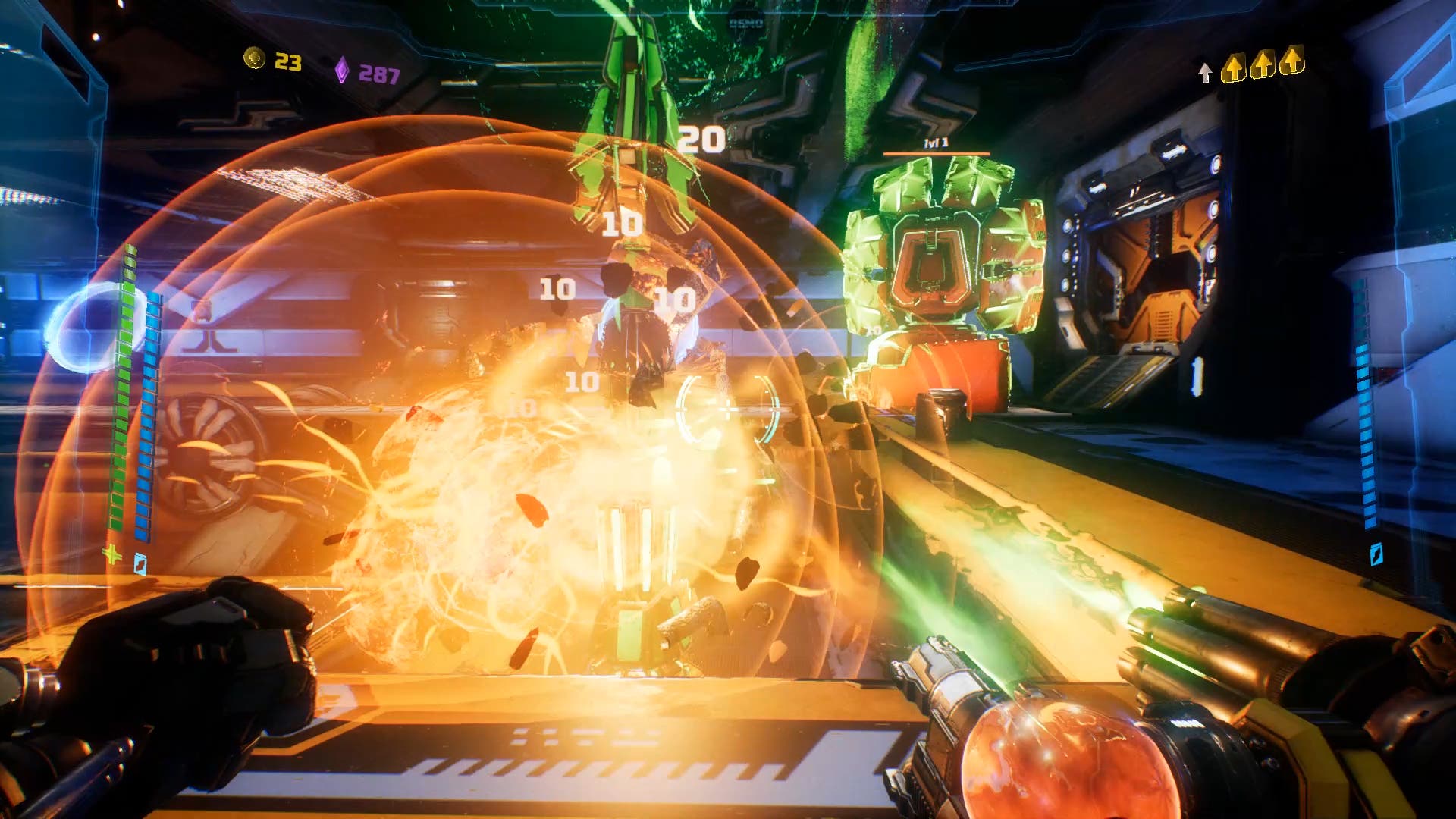 The setup for MOTHERGUNSHIP is rather straight forward. The world has been taken over, and not many humans remain. You are now part of the Resistance that is working to destroy the mothership, or MOTHERGUNSHIP as it were. It’s not all serious, as humor is injected into the dialogue. And for the most part, the jokes mostly hit, but often times everyone is too chatty for the game’s own good. While the main objective is to destroy the MOTHERGUNSHIP, there’s more to do along the way. Everything is mission-based, or run-based. You have the ten story missions, but along the way there’s plenty of side missions that can be played to earn coin, experience, or gun parts for other expeditions. MOTHERGUNSHIP is full of responsive, and fluid combat. With it being bullet hell like a shmup, you have to keep moving. Standing still means death. The weapons the enemies or their turrets fire can be fast projectiles, or slow, but the slow ones are deadly.

Each room of a ship you board is randomly or procedurally generated, and is full of its own environmental hazards, from spinning buzzsaws to lava. When you enter a room, you can choose to fight everyone in it, or in most cases, can find a door and shoot it to escape to the next level. It’s best to think of the room layout as grid like in other roguelikes, just done from the first-person perspective. This means you won’t collect a lot of experience or in-ship currency to get more parts, but it does mean survival. Rooms are signified by the icon they have on them. The shop room for instance, locks during combat but allows you to spend in-ship currency for upgrades and new parts to improve your loadout for future rooms. Dice rooms applies a random condition when you go into it. Challenge rooms that give you a random challenge like using one gun instead of two, killing X number of enemies in X amount of time, and more. There are plenty of others, but this makes up the most varied rooms. It’s always great to see green checkered flag rooms, because that means you’ve reached the end of the run.

The crux of what makes MOTHERGUNSHIP work, is the crafting. You can build your own guns from parts you’re given and collect along the way. The main rule of building is that all guns must face forward. Crafting a gun requires only two of three systems: connectors (the chassis multiple guns connect to), barrels (weapons themselves: blasters, flamethrowers, rocket launchers, etc), and caps (these serve as modifiers that increase accuracy, or add a percentage chance to cause more damage). I do wish there was a loadout system, or a way to save creations to use in later missions, provided you had some or all of the parts on you. You do have to be cautious of what you put on your guns, despite having the parts available, as instead of ammo, you use energy to shoot your guns. Each arm has its own energy bar to keep track of, and once depleted, takes a while to recharge.

The game is constantly tracking and updating stats, from shots fired to enemies killed and even how many jumps you take. MOTHERGUNSHIP cuts the bullshit, and gives you a triple jump from the start. I’m hoping this’ll change in the near future, but it seems very limited to let you only have 100 parts in your inventory at a time. Having to part with anything you may need if you die too often is so bittersweet. MOTHERGUNSHIP does a bad job at showing you what your level is compared to the upcoming mission’s difficulty level, as there’s nothing to measure it against. You can however, spend experience tokens at the armory to upgrade energy, health, number of jumps, and even landing resistance from large heights. 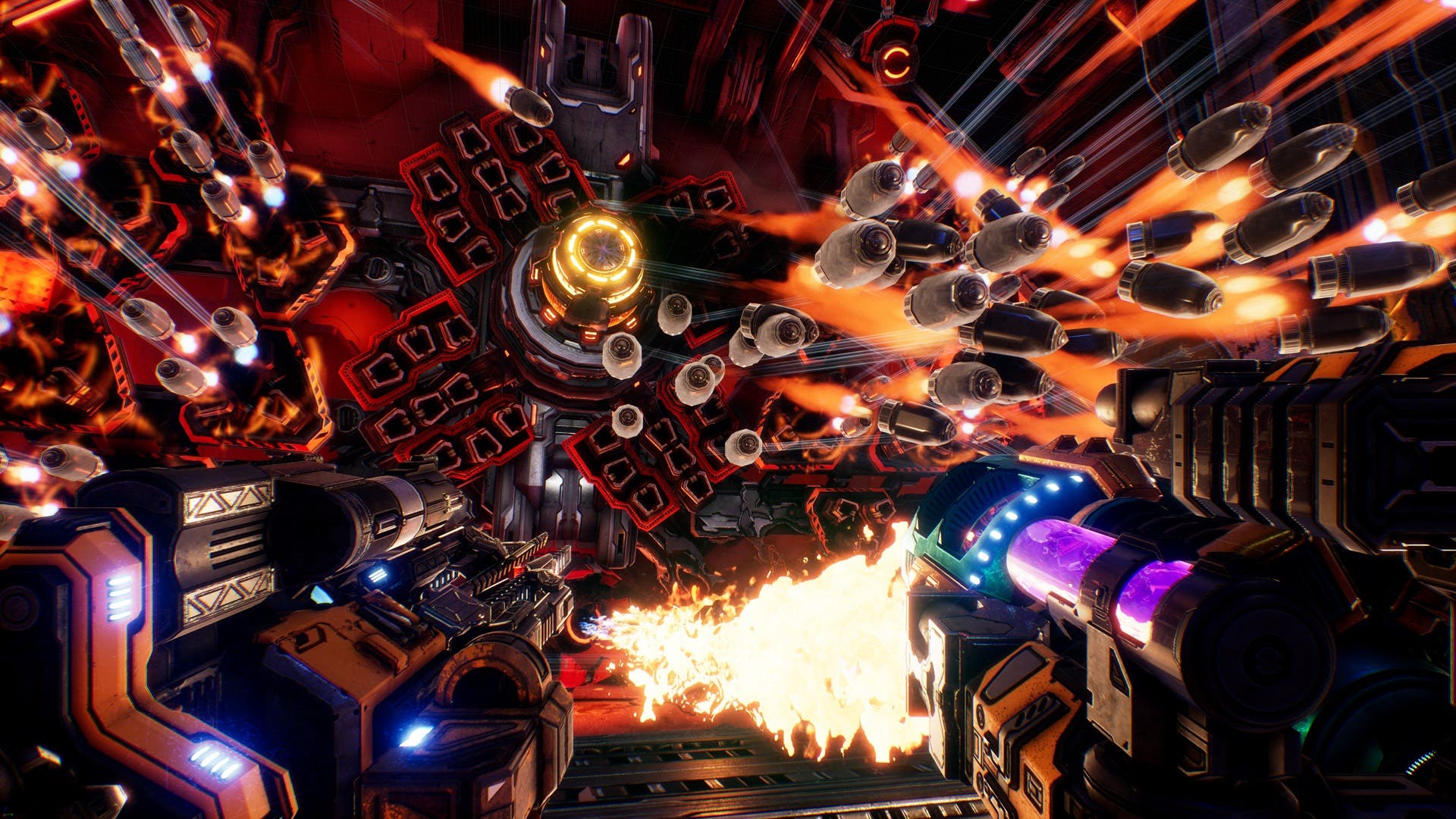 Mostly everything in the MOTHERGUNSHIP has permanence, but death during a run means you lose anything you’ve collected or brought with you for that run. So this exhibits some roguelite elements, but an even lighter version. Attrition happens through death, and as parts dwindle away, so will your patience. So, if you start to die during missions, that means you need to grind out some side missions. Yes, I said grind. It doesn’t feel as bad as it sounds, and is a lot of fun.

Co-op isn’t in the game currently, but is promised as a FREE update to the game in August, seems like a perfect. This is not only because every level and part of the hub are has a second station for your co-op partner, but the game really demands for social interaction. It’ll be really exciting to see how co-op factors into the game. Also promised is future updates of more enemies, new bosses, and new gun parts. 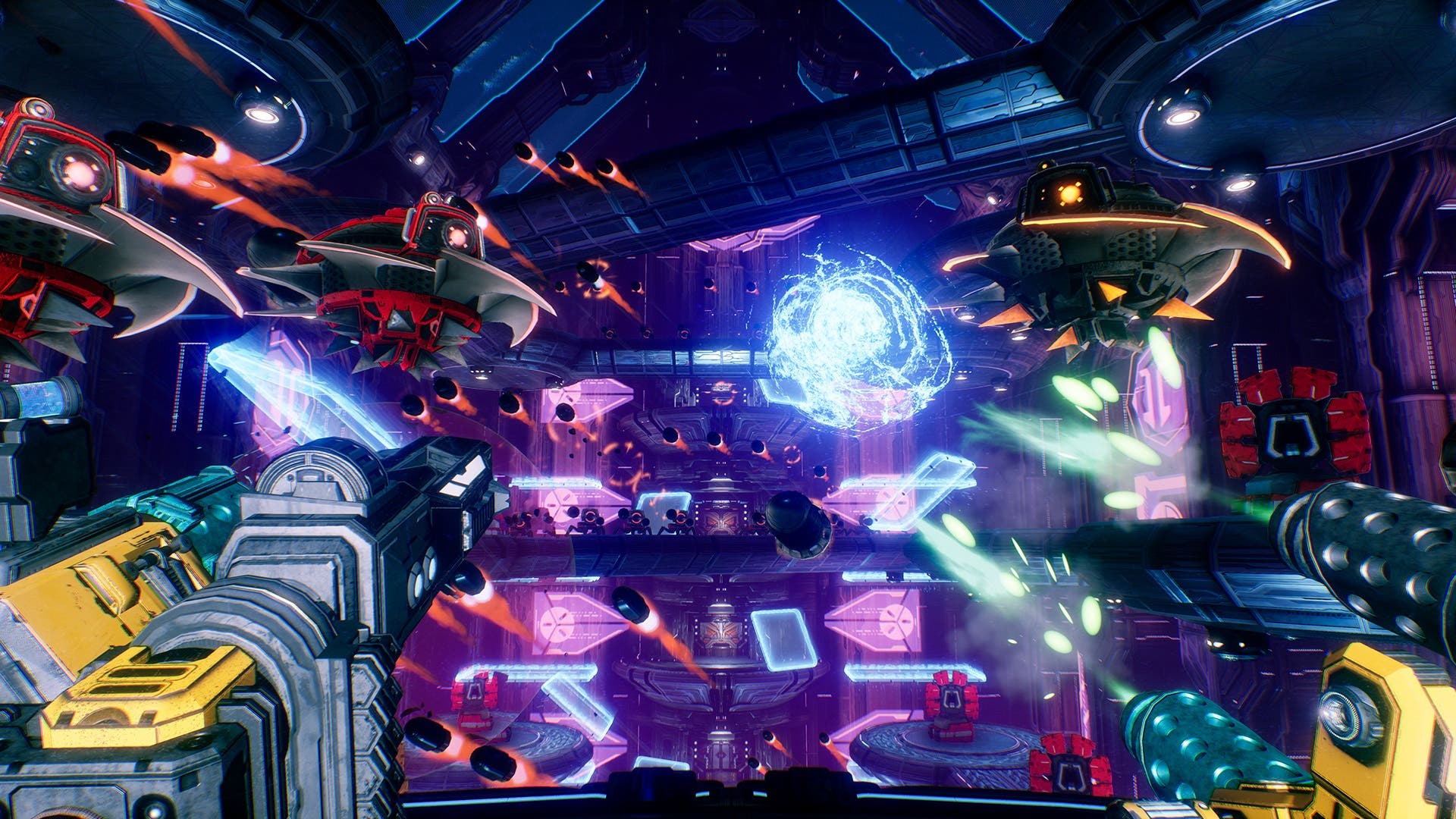 MOTHERGUNSHIP is dripping with personality and style. It excels in its end game when it reveals it has an Endless mode, then “Nightmare” difficulties, and ways to grind XP to make you stronger and faster. Crafting guns is far and away the best thing about the game. It’s a shame you can’t save any of them as a favorite, but knowing that you can form a window, or something that looks out of a cartoon is just such a highlight. MOTHERGUNSHIP is one of those games that you keep going back to see what other crazy shit you can make.