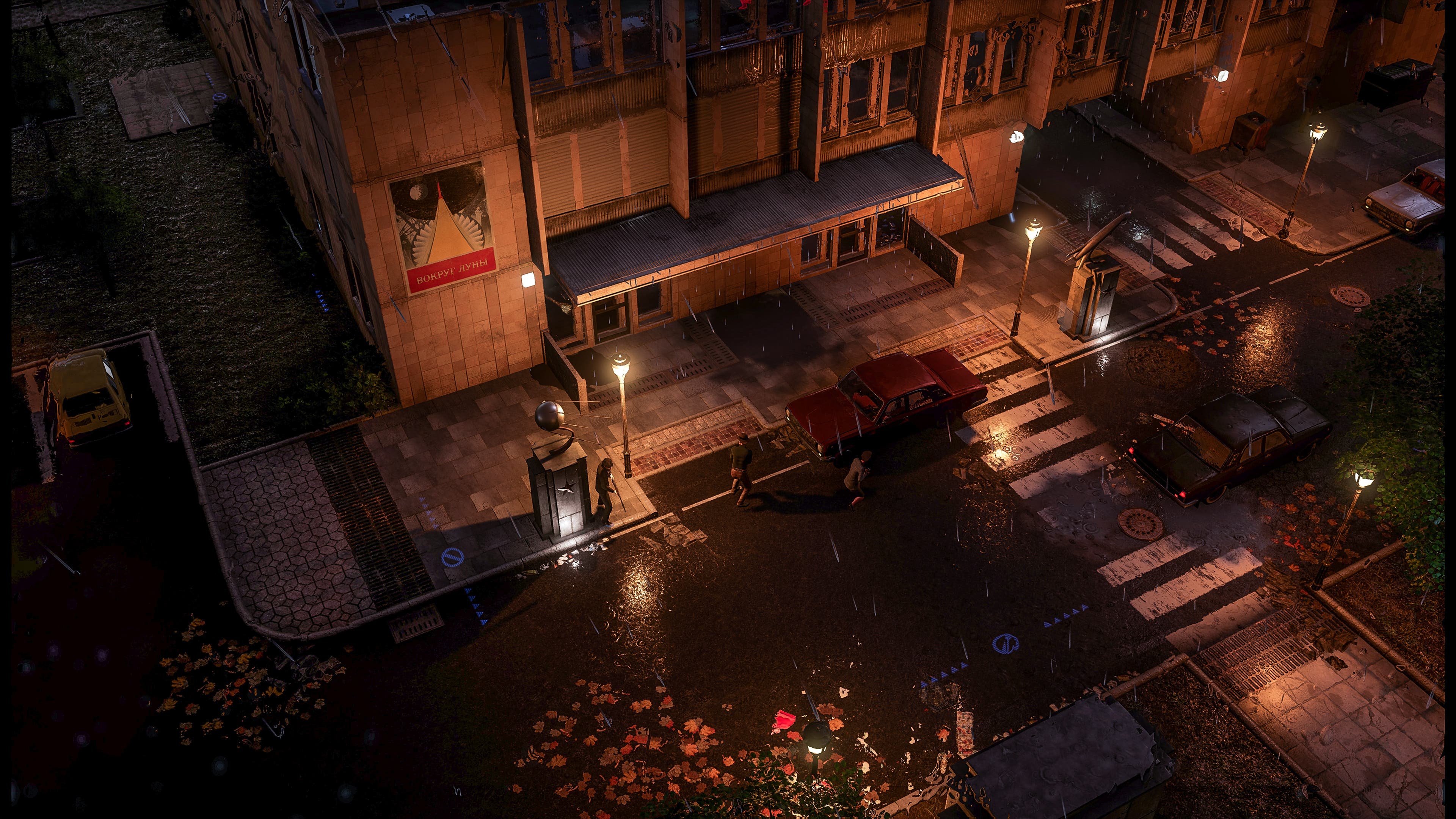 The year is 1983, and you choose your side: play as a rogue member of the CIA or a KGB agent out to unravel the conspiracy that is The Cabal. While the story is served when you want it, other missions are time sensitive and can get away from you. The paranoid of the Cold War is at its peak, and uncovering this shadow organization will prevent annihilation. CreativeForge went to great lengths to find as many real-life scenarios that happened during the 80s to be as accurate possible, then fill in the blanks with fiction. Phantom Doctrine is intriguing from the get go, and letting you make all of the decisions is full of tension and mystery for nearly 30+ hours on a single playthrough.

This is a tactics game, first and foremost. But it plays a lot like chess, and being steps ahead of the enemy is the key to victory. Everything from who and what you bring with you dictates how a mission can play out. Phantom Doctrine also has a heavy presence inside the hideout where it’s also a management sim. Decisions made here can affect the long game. Disguises play a huge role in the game, making it so your character blends in to the environment, but do something out of the ordinary and all bets are off. Noise is not always the best option, for a mission have better success, weapons should be suppressed and kills should be silent. Preparation in your hideout can make missions easier, and having that forethought goes a long way. This game has depth in the deepest of waters. 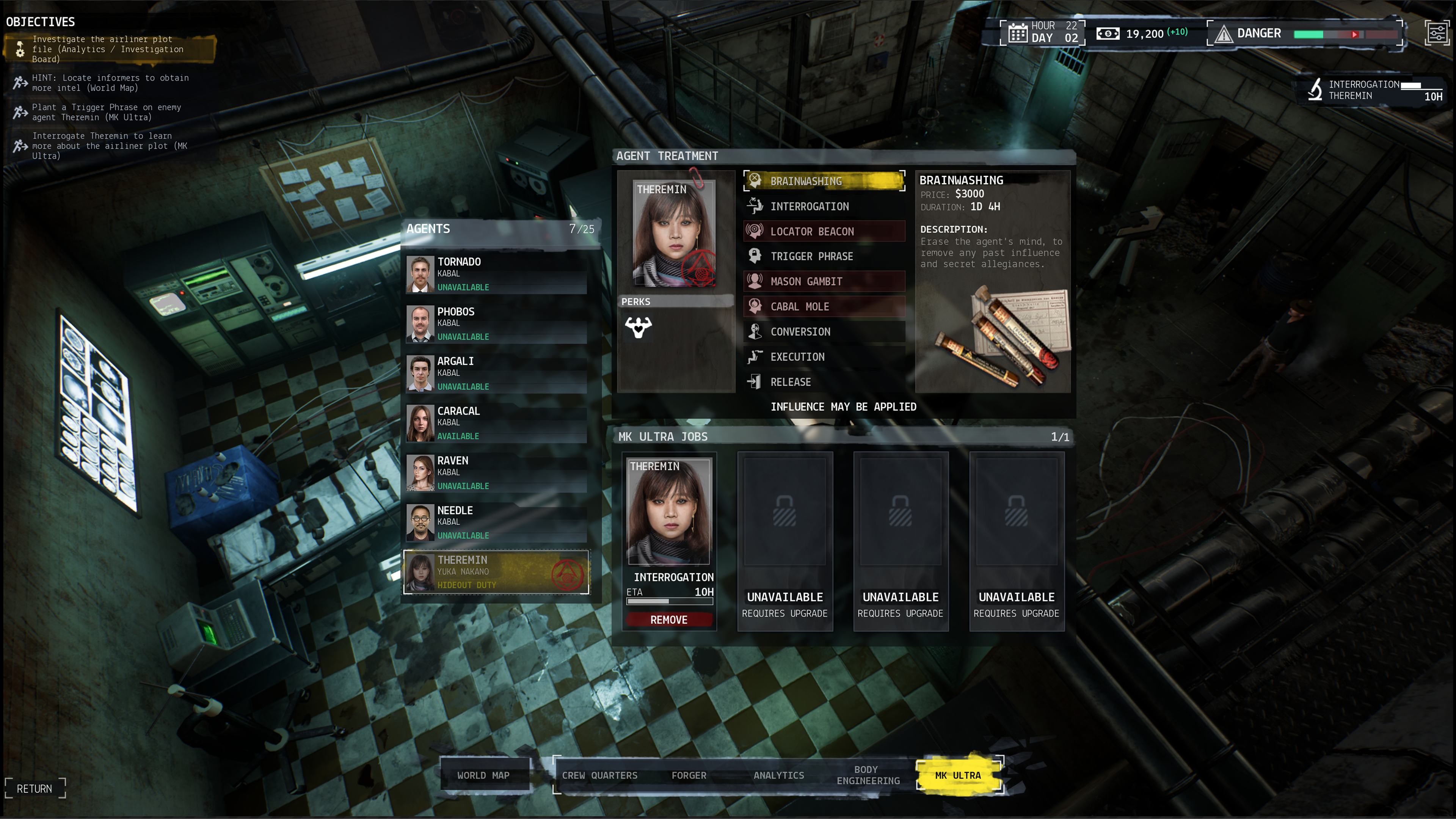 During missions, is at the height of tension for Phantom Doctrine. Every turn must be carefully planned and thought out. Any mistake you make is not due to the game, but to your poor planning. Prior to starting a mission, it’s important to send your crew out to the area to place people for being lookouts, or even disrupting things before you’re called to run a mission. The game is fairly forgiving, but mistakes have heavy consequences, even on the easy difficulty. Often times you’re given decisions like saving the person you’re after. This can be to question them at HQ, or to add them to your crew. Otherwise you let their secrets die with them but save the rest of your crew from increased danger.

Phantom Doctrine implores you to be silent and stealthy as possible, with take downs and the ability to hide bodies. Combat is multi-faceted, it’s not something you want to get into, but if you do, you can set roles. Like there’s a customizable overwatch, kills that focus on low health enemies with high awareness, or getting head shots when in close range. When it’s all said and done, you must call for extraction. This too is a careful process, because you have to wait three turns for it to arrive. This means you need to be aware of where you are and where you call your extraction vehicle too. If you take too long getting there, you incur an extraction penalty and increase danger to the mission. It’s wholly exhilarating to escape a mission as reinforcements are closing in and taking shots on you. The unrest you feel when finishing a mission feels crafted, in that you’re just getting by. 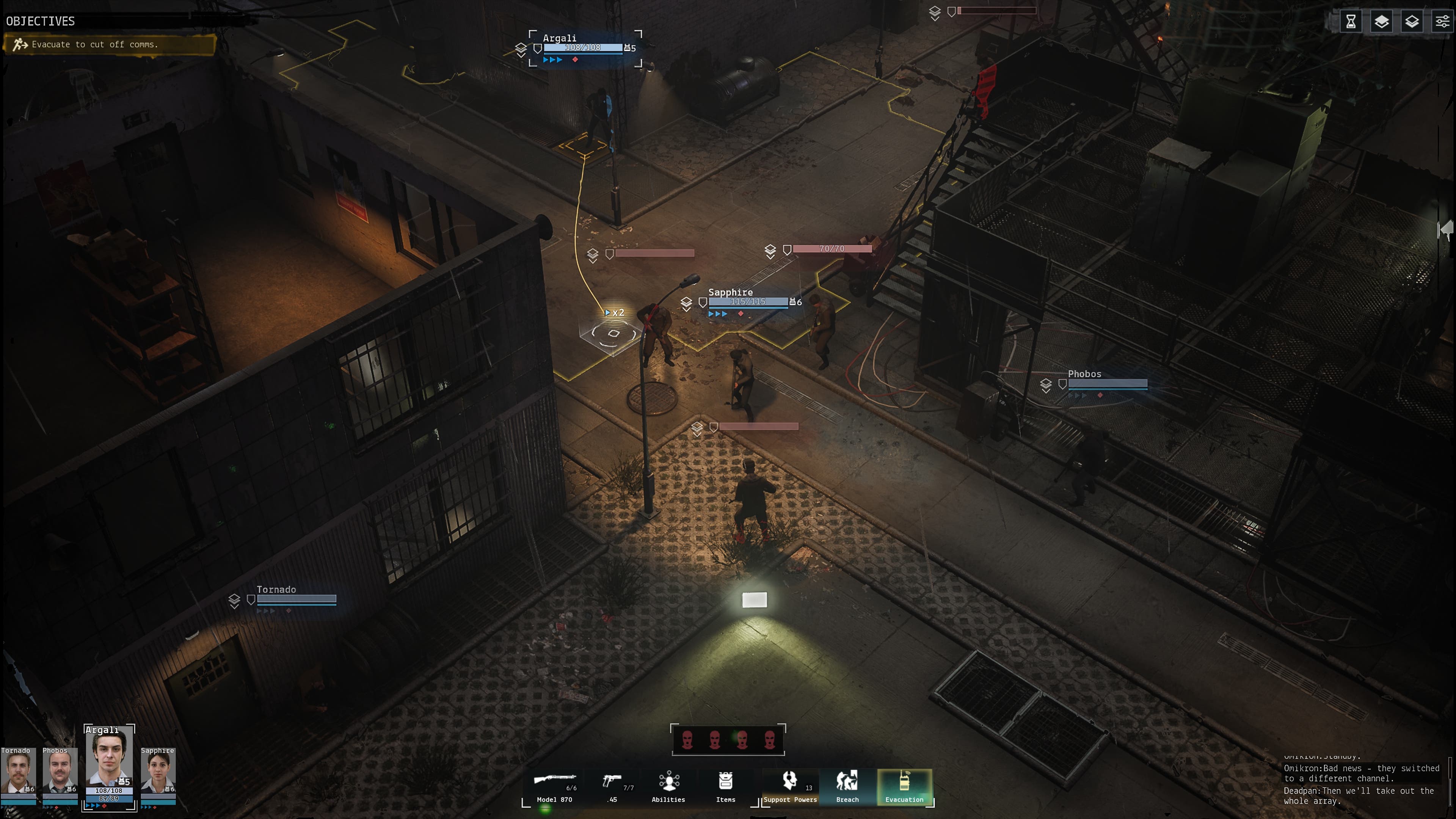 Outside of missions, you’ll have a lot to manage and worry about. First, you have you crew’s well being. Then, your safe house’s. There’s a danger bar that governs your team’s safety. If the danger threshold is breached, then you must move to a different safe house – only if you’ve scouted one out beforehand. Otherwise, when things are good, you’ll have different rooms to monitor: Crew Quarters, Communications, Forger, Infirmary, Workshop, Analytics, Body Engineering, and MK ULTRA. This is your headquarters where you’ll be assigning perks, forging new IDs for your crew, investing in upgrades, building smoke grenades, and implanting new agents with passphrases. It’s creepy and fantastic all the same, everything you’ve ever heard of during the Cold War makes an appearance in the game. All while you’re doing that, you’ll be sending your crew off to different corners of Russia to do anything from simply recon an area, to interrupting missions, and getting boots on the ground to carry them out.

Another aspect of the game aside from the tactical gameplay or the managing of crew, is reviewing intel. As you go through missions, there will be an area of a level to collect intel. These can provide big breaks within the dossiers for each case. Once you get them back to base, you’ll put them on your investigation board, which is a big pin-board complete with yarn strung between two objects to associate them. You’ll review text documents to reveal code words and key phrases that bring you closer to uncovering the conspiracy. Completing this intel is the only way to progress the story into special missions. They’re wonderfully named because it feels special to start these mission as opposed to any of the others. It all feels like you’re running an anti-conspiracy network, and it feels awesome every step of the way. Phantom Doctrine is not your enemy, it will save on turns, and create auto-saves. Unfortunately there is no quicksaving, which I hope makes its way into the game later. But even on easy, Phantom Doctrine is not easy. It asks a lot of you, and expects you to get it right, or there will be consequences. There’s 80s aesthetic everywhere. The game looks and feels the part, evoking elements of the aforementioned “The Americans” I so enjoy. The cutscenes that punctuate the extraction at the end of a mission have a great cinematic feel. When you’re about to breach a room with a lot of guys in it, you can’t help but feel the build up of the excitement. These systems serve a purpose, but thanks to NVIDIA Highlights, can be for show. When you kill someone while on overwatch or execute a breach, NVIDIA will capture that moment for you to share or playback at your leisure.

Customization is a huge part of the game. It’s a personal, and a way to get attached to your crew. You can create every detail, or let the game decide with a randomizer. Either way, you get a unique cast to work with that don’t look the same from one to the next. Events come up where things appear suspicious, but if you take certain actions, your crew will trust you more and unlock new perks and abilities. Agents can and will get their IDs generating too much heat, and it’s such a simple but welcome system to be able to generate a new ID for them. Phantom Doctrine has little details that feed into the larger details for cohesive experience like none other. 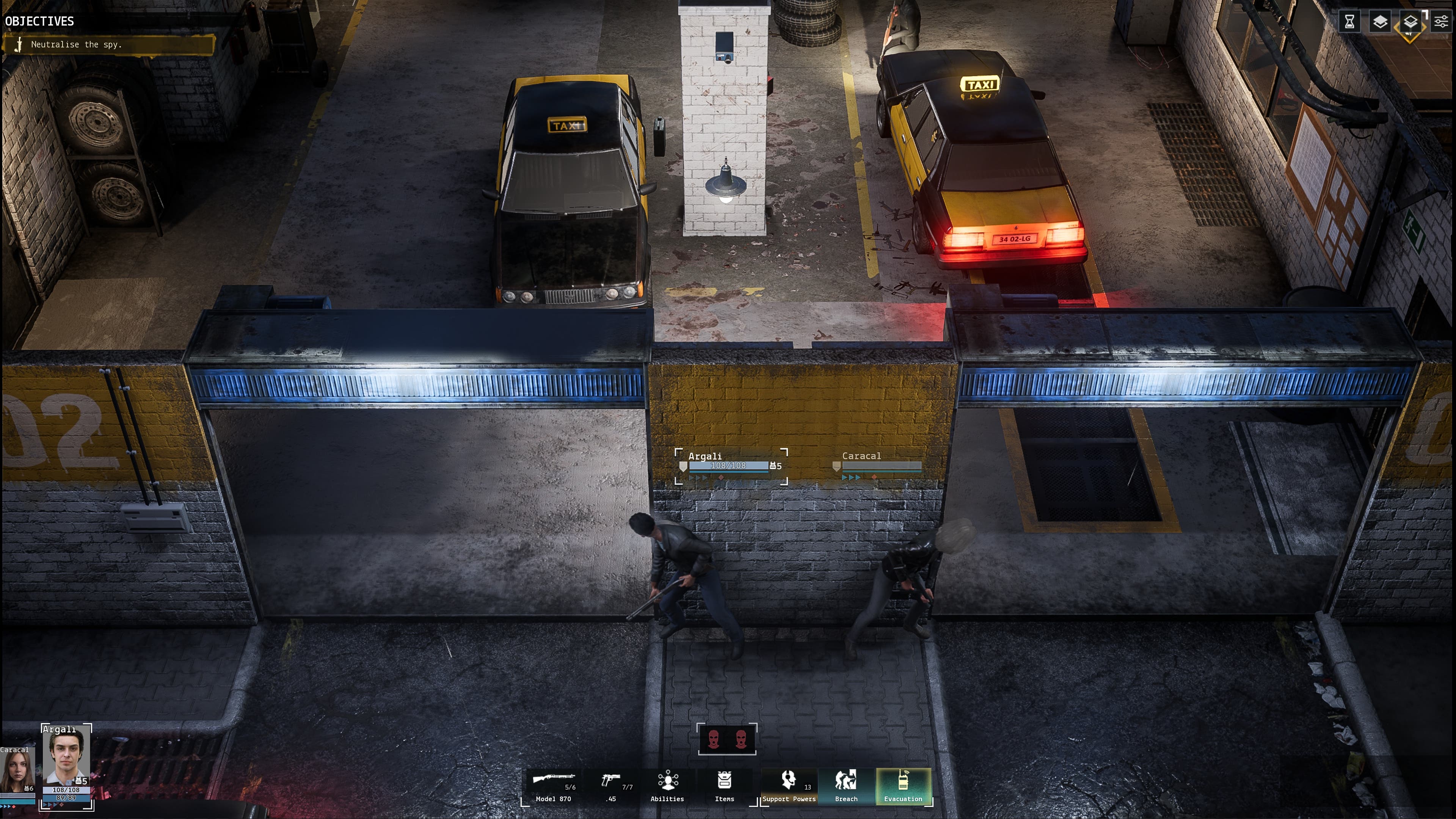 Phantom Doctrine captures the look and feel of the 80s and re-creates the paranoia that drove the Cold War up until its end. It’s like all the best parts of an espionage film or novel come to life. Whether playing as an American, or a Russian, you’ll get two radically different campaigns each and every time. This is simply CreativeForge’s best work to date. Phantom Doctrine is ambitious, bold, and creative; paying off in every way.