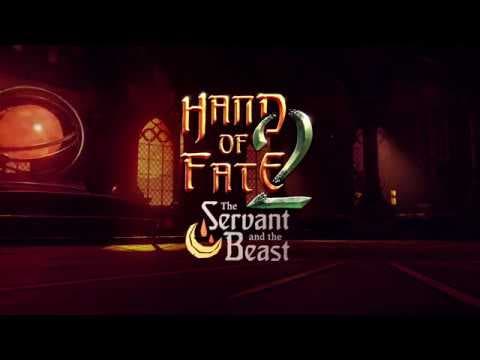 Hand of Fate 2 second DLC, “The Servant and the Beast” is available today

BRISBANE, QLD – Oct. 15, 2018 – Hand of Fate 2, the acclaimed action role-playing game from Defiant Development, expands today with The Servant and The Beast downloadable content and the “Combat Reforged” update. Available now for PlayStation 4, Xbox One, PC, Mac, and Linux, the DLC and free update will also be released soon on Nintendo Switch.

The Servant and the Beast invites players to return to the Dealer’s table once again. Enjoy a brand-new campaign in the Game of Life and Death that sees our hero strike a bargain with a monstrous entity who helps them escape from fighting pits in exchange for blood.

This character, Veles the Shadow Beast, is also included as a companion who can accompany players into combat and vanquish downed foes. Veles also has more dark and terrible powers, along with a vengeful quest chain filled with more encounters to enjoy and gear to unlock.

“The Servant and the Beast is an exciting new chapter to Hand of Fate 2’s growing story,” said Morgan Jaffit, Director, Defiant Development. “When players return to meet Veles and go on an all-new adventure, they will find our most ambitious and expansive DLC to date.”

Arriving in tandem the new content is the free “Combat Reforged” update, which dramatically overhauls how battles play out in Hand of Fate 2 with a myriad of enhanced fighting mechanics. It also rebalances enemies and equipment and contains other improvements that make this the best time to play the game whether it’s for the first time or a repeat playthrough.

Hand of Fate 2’s previous DLC, Outlands and Outsiders, is now also available on PlayStation 4 and Xbox One. Released earlier this year on PC, the new add-on features a story about altering the past, a new goblin companion with a unique quest line, and more cards to acquire.

The Servant and the Beast and Outlands and Outsiders are on sale for $6.99 / €5.99 / £4.99 / A$8.95 apiece on the PlayStation Store, Microsoft Store, and Steam, and GOG.com. The former currently is also available at a 10% introductory discount via Steam, where the base game is also temporarily on offer for 25% off its base price during the same period.