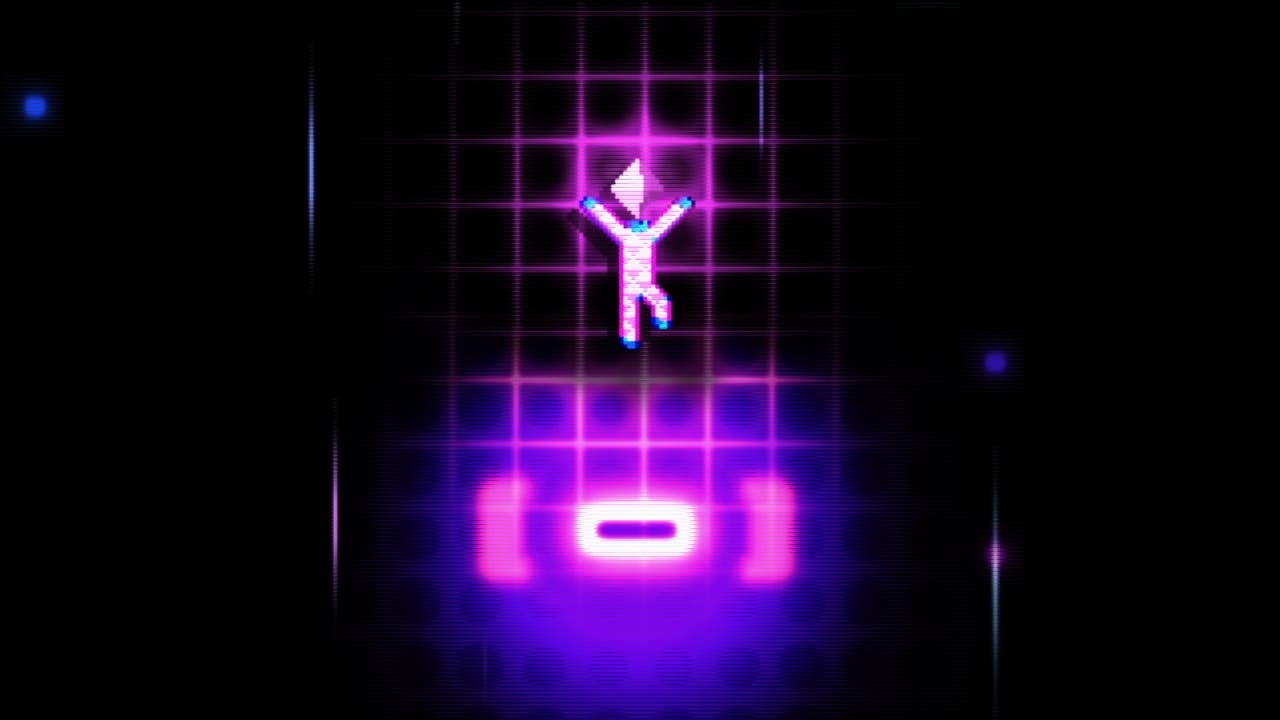 Imagine spending a quiet evening in your small cabin in the middle of the woods, going out for a nighttime walk, touching a spinning inter-dimensional octahedron which consumes your corporeal being, spirits you away to flatland and imbues you with the untold power to manifest blocks beneath your feet. It’s a tale as old as time, really. This is the premise for the neon fever dream that is Octahedron’s world, in which you will work through levels collecting gems, lighting bulbs, plucking flowers, and ensorcelling transient platforms beneath your feet to climb your way to the exit point at the top. As with any fish out of water tale, there is a sense of needing to find your way back “home,” but also that of escaping something sinister not far behind, and as such progression through the levels feels like casual exploration and compulsory survival in equal measure. 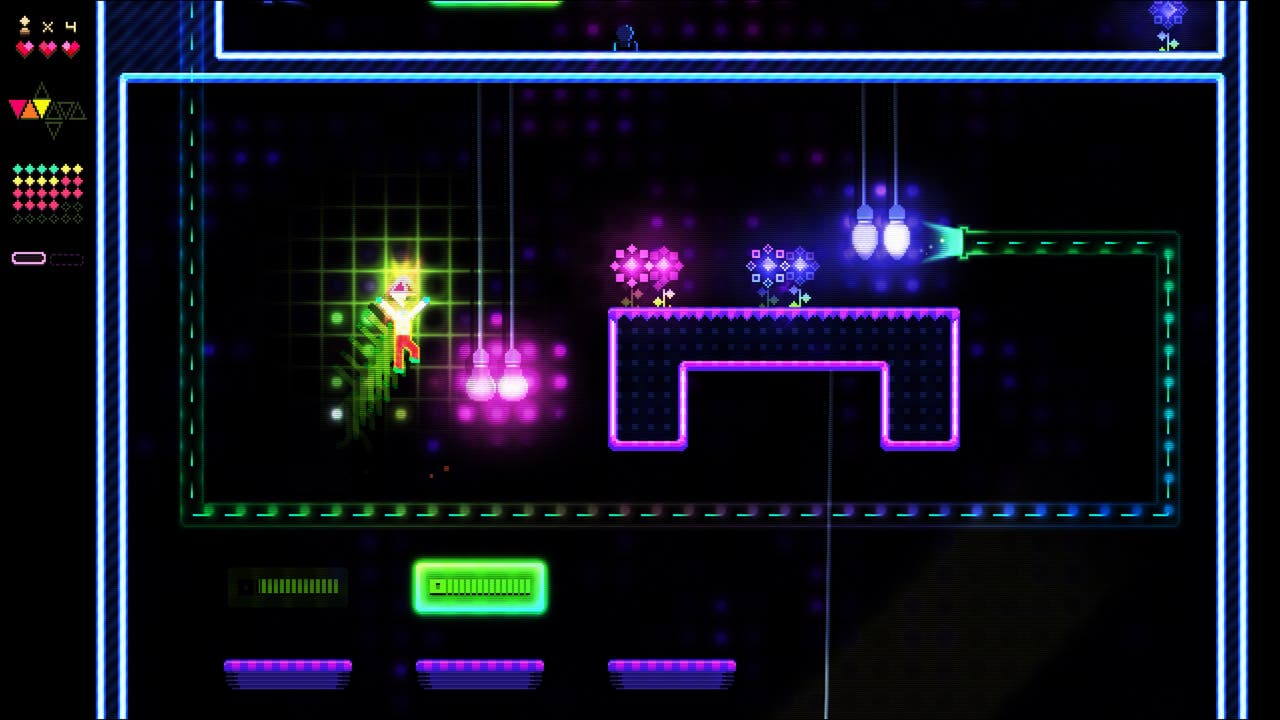 The primary things you’ll spend your time doing in Octahedron are jumping and making rectangular platforms appear underneath you to land on. You can keep your “SUMMON BLOCK” button pressed to ensure your platform remains underneath you, and it will even slide horizontally to follow you. However, the catch is that each one has a limited lifespan of a few seconds, so strategy becomes important early. The game does a great job of teaching you new level mechanics as you go and building them on top of one another to reinforce the lessons, but as your options expand, the challenge ramps up. You’ll quickly encounter special “chargers” that can send your platform moving, or large blocks with progress bars that fill up as you move past them until they become solid, remaining until you drain the bar again by moving back in the opposite direction.

One of the things I really like about the design of this game is that your abilities as the player are relatively limited, but the means by which they are built upon are part of the environments you play through and are integrated into the design of the platforming. Levels play out mostly fairly linearly, with fairly intentional paths and solutions through which you’re intended to move, but even when you can see the path laid out ahead of you, execution of the necessary steps still takes skill and precision. The result is the kind of platforming that fans of the genre live for, empowering you with a simple, well-tuned control scheme and an ever-expanding toolbox at your disposal through which to make your way through increasingly difficult levels until you have either mastered the game completely, or at least have the right mix of skill and blind tenacity.

The game is also clearly meant with both speedrunners and completionists in mind, as the end screen of each level is full of details like your completion time, the number of collectibles you acquired, and perhaps the main spectacle, the number of platforms you used. As early as the first level, the game is daring you to go back and do better, become more efficient, collect more stuff, get more good. For completionists, this is either a blessing or an absolute nightmare; for the speedrunning community and even for people who are competitive with their friends, it is an excellent representation of your triumph or failure. I’m not particularly good at going fast or being terribly efficient, but it’s very cool to have my opportunities for improvement visualized so tightly.

Artistically speaking, Octahedron is pretty dang good. Many games try to pull off the minimalist neon-on-black look, and where many fall short of their goal, Octahedron delivers, thanks in no small part to a strongly executed take on the aesthetic and a host of great particle and visual effects that amplify your immersion. Unsurprisingly, it’s all of the little details that make it work so well. Colors shift and flowers bop in time with the rhythmic tracks backing each jaunt, and the music is precisely what you’d want to accompany this kind of rainbow-drenched, dopamine-rush-inducing trip through technoland. Plus, it runs smooth as butter, even despite how much is happening visually, which is worth noting if for no reason other than I’ve seen less visually complex titles struggle on the Switch hardware. 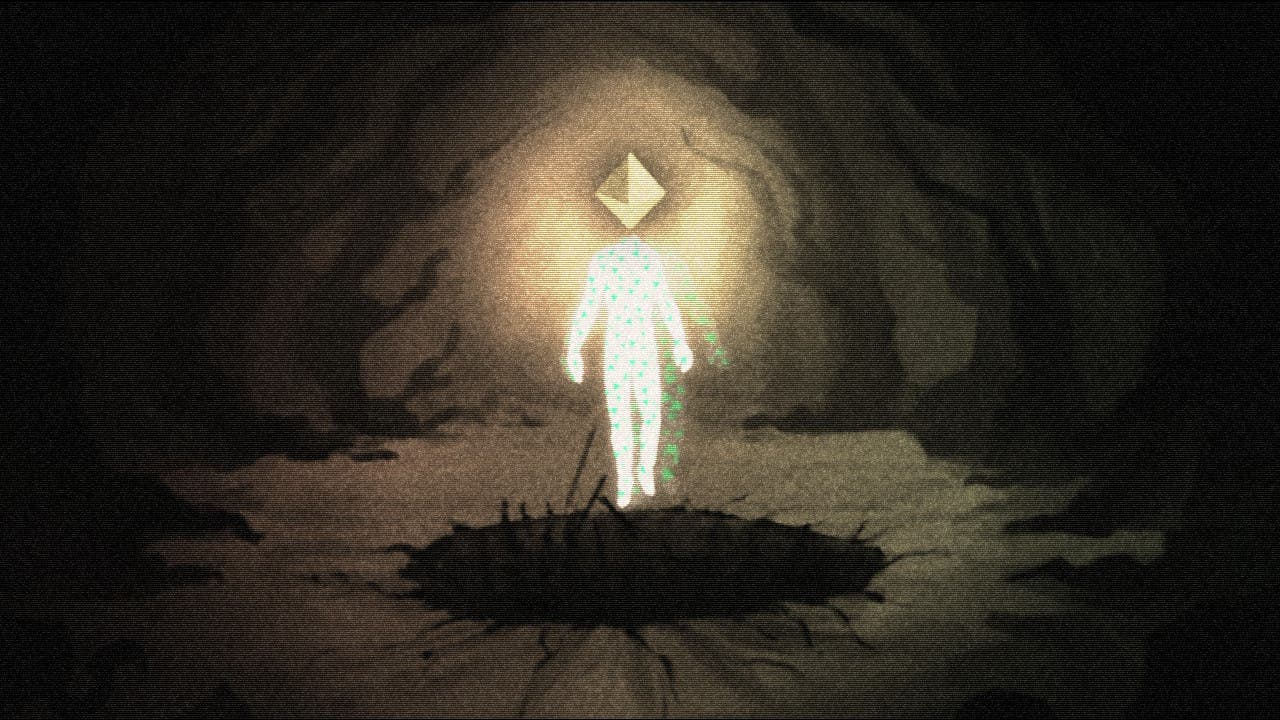 There is no shortage of puzzle platformers in this day and age, but there is certainly a shortage of games in this genre which are actually good. The advent of lower barriers to entry on various game marketplaces has allowed for many indie success stories, but also for a greatly increased amount of shovelware to wade through. Octahedron: Transfixed Edition is luckily a solid game with a strong, consistent visual style and a thumping soundtrack that helps to complete the sense of “being there” as well as any other component of the game. If you’re looking for a new platformer on the Switch to fill your time, look no further.