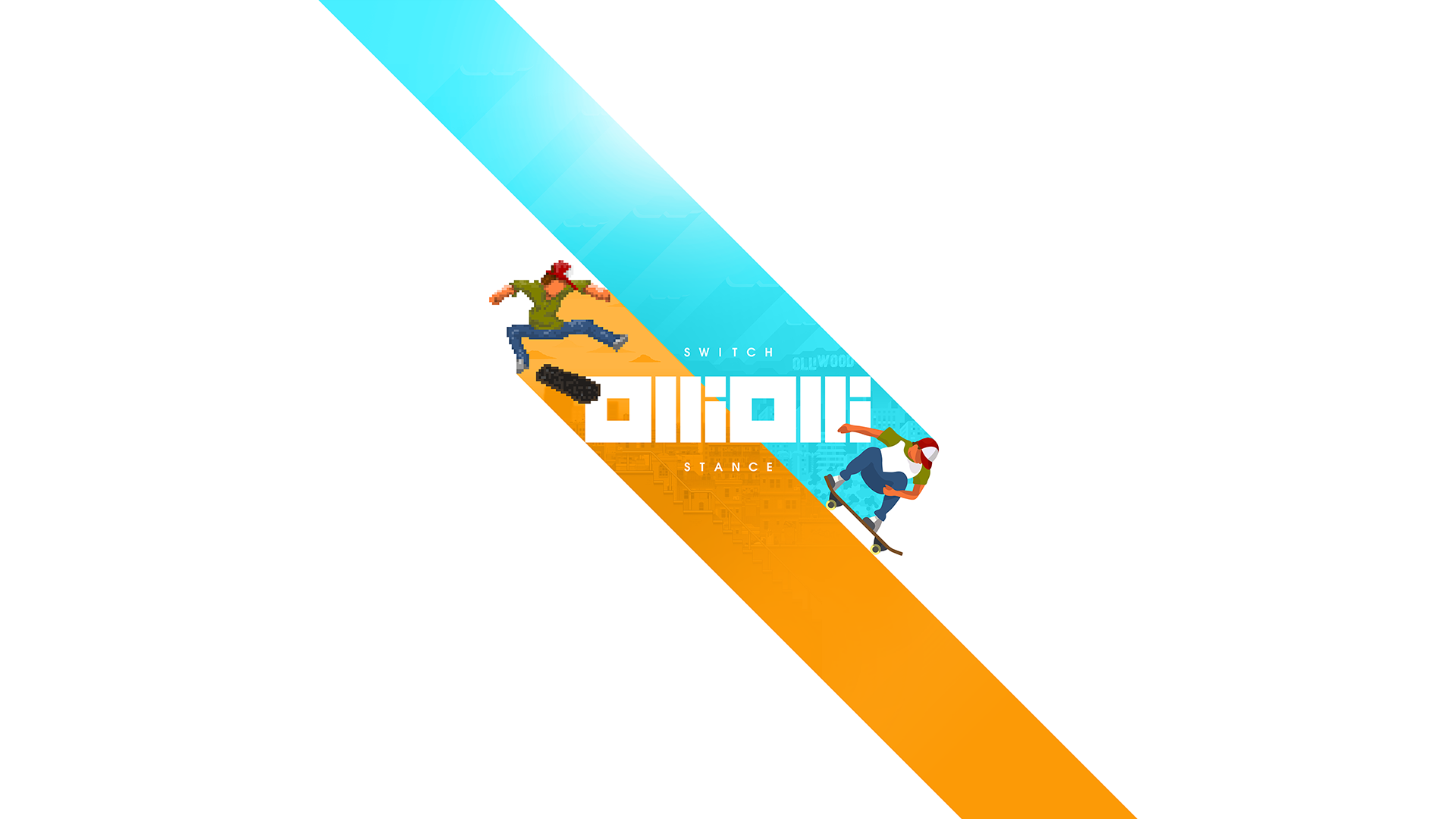 OlliOlli and OlliOlli 2 were beloved in their time for their tight mechanics, engrossing gameplay, great visual style and stellar soundtracks, and both games have aged incredibly well, to the point that they could be releasing for the first time today and still be extremely fresh and fun. Releasing both games on the Nintendo Switch feels like a kind of homecoming to a platform they were always intended to live on. OlliOlli: Switch Stance is the perfect companion for Nintendo's hybrid console and whether you're a series veteran or a first-time player, this is a title you should absolutely have.

There are few experiences in gaming so sublime as entering a flow state while working your way through a challenging landscape, chaining together moves and hitting every single button press at the exact right time to produce a perfectly executed run, the aural and visual feedback of which perpetuates your trance of gaming nirvana. Few games I have played in my life are capable of regularly producing this phenomenon, as doing so requires the right composition of controls, music, level design, and all of the small imperceptible details that hone a game into an masterfully crafted engine for driving you forward. 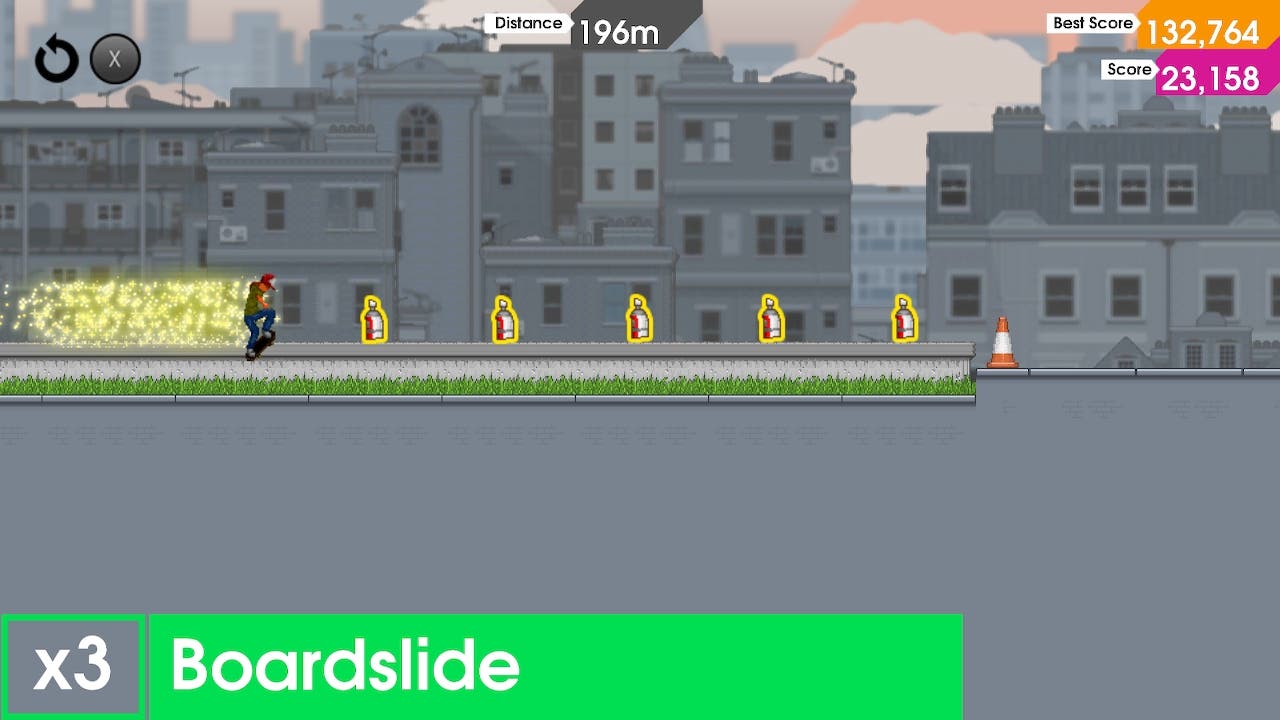 This is the experience that the OlliOlli series delivers regularly, accomplishing a feat most games can only aspire to. Yes, these are skateboarding games (arguably some of the more fun ones I’ve played), but make no mistake, these games are as much about creating that flow state as they are about pulling off tricks. They are designed specifically to create the conditions that allow you as a gamer to flourish and access the best of yourself, presented in the trappings of a stylish 2D sports platformer.

If you’re unfamiliar with OlliOlli, let’s review the basics. Both games are presented as a series of discrete levels across varying locales, each designed around a set of challenges. Your primary goal in each level is to skate your way to the end by pulling off jumps and grinds with some tricks thrown in so that you can traverse obstacles and maintain your speed. It’s an easy enough premise on the surface, and you could play the game focusing merely on level completion if you wanted. The real meat of the game comes from each level’s challenges, which are there not just to give you more to do but to help you practice your skills and get better. 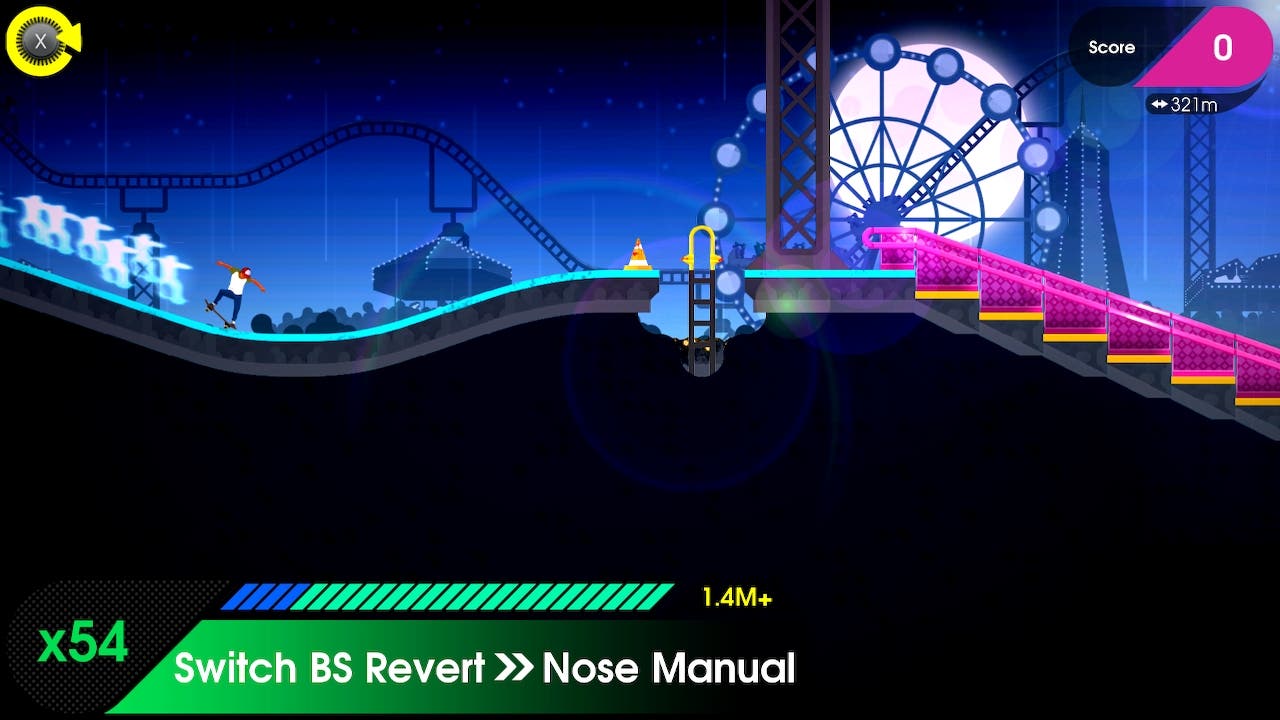 Challenges vary in type, but most of them push you to get better at some small aspect of the game, whether its pulling off a specific trick, chaining larger combos to get higher overall scores or specific combo scores, collecting certain items (which requires you to get better with jumps and timing), or completing a run with no bad landings. In the early levels, some of them can be mildly frustrating as you are developing your understanding of the game and working on your timing, but working to complete these trickier tasks effectively acts as practice, and before long you will notice yourself improving in those areas. It’s a clever, perhaps even obvious design decision, but it works wonders for your skill progression and overall enjoyment. Completing all of a level’s challenges unlocks the “pro” version of the level, which contains increasingly more difficult challenges to pull off.

Between natural progression, challenges, and pro variants, OlliOlli 1+2 allow you to tweak the game’s difficulty to suit your preferences, so that you can easily swap back and forth between quick jaunts through the various playgrounds and repeated runs to try and nail that giant combo. OlliOlli can be as relaxed or intense as you want it to be, although even in moments that would ordinarily be frustrating (like trying to perfect the timing of skipping a rail grind to pick up an item on the ground for the 30th time), the excellent soundtrack selection ensures that you’re always going to be really _feeling it_ and staying positive. 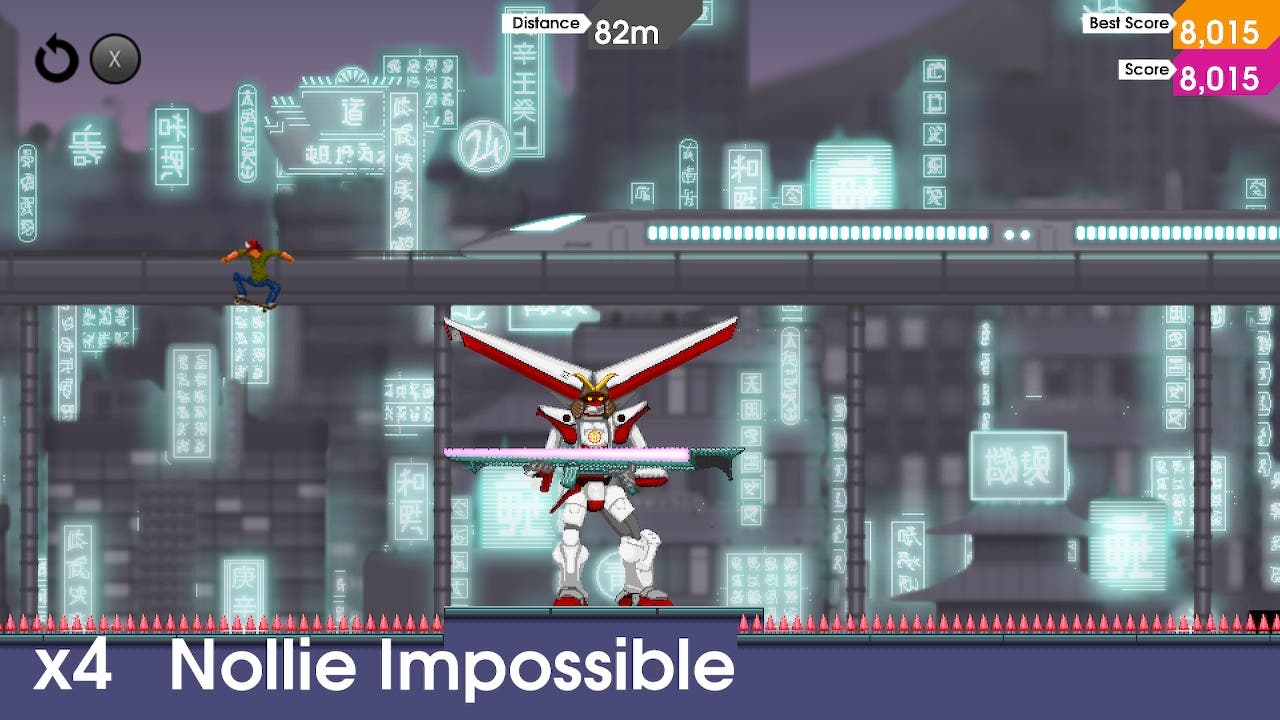 As far as pulling off tricks goes, the game uses a well-considered balance of button presses for actions like jumping, landing and spinning, and stick rotations for your jumps, tricks and grinds. It’s a simple control scheme with consistent implementation, so once you’ve memorized the controls for jumps and tricks, the same controls apply to the various grinds. This all works particularly well on the Switch Pro Controller, whose sticks give you ample rotational room, and honestly things work surprisingly well on the Joycons for the most part. Occasionally I will over or under rotate but that’s more a factor of the sticks themselves; typically they are spot on. This probably shouldn’t be much of a surprise considering OlliOlli’s roots as a PS Vita release, and the precision it needed to nail on the system’s analog nubs; roll7 are experienced with making their controls feel good even on smaller-sized inputs, and that shows very well on the Switch.

OlliOlli: Switch Stance ships as a single install but the main screen is effectively a launcher for the two games’ executables. There is a small part of me that would like to have seen all of the content and levels from both games in a single experience, but in pratice I don’t imagine there really is much want or need to jump between the two games. Not to mention that the visual styles of the two games are so different that having them occupy the same space would result in some strange incongruity. More than likely, fans and newcomers alike will spend time systematically working through each game individually, however it still would have been a really great bonus. 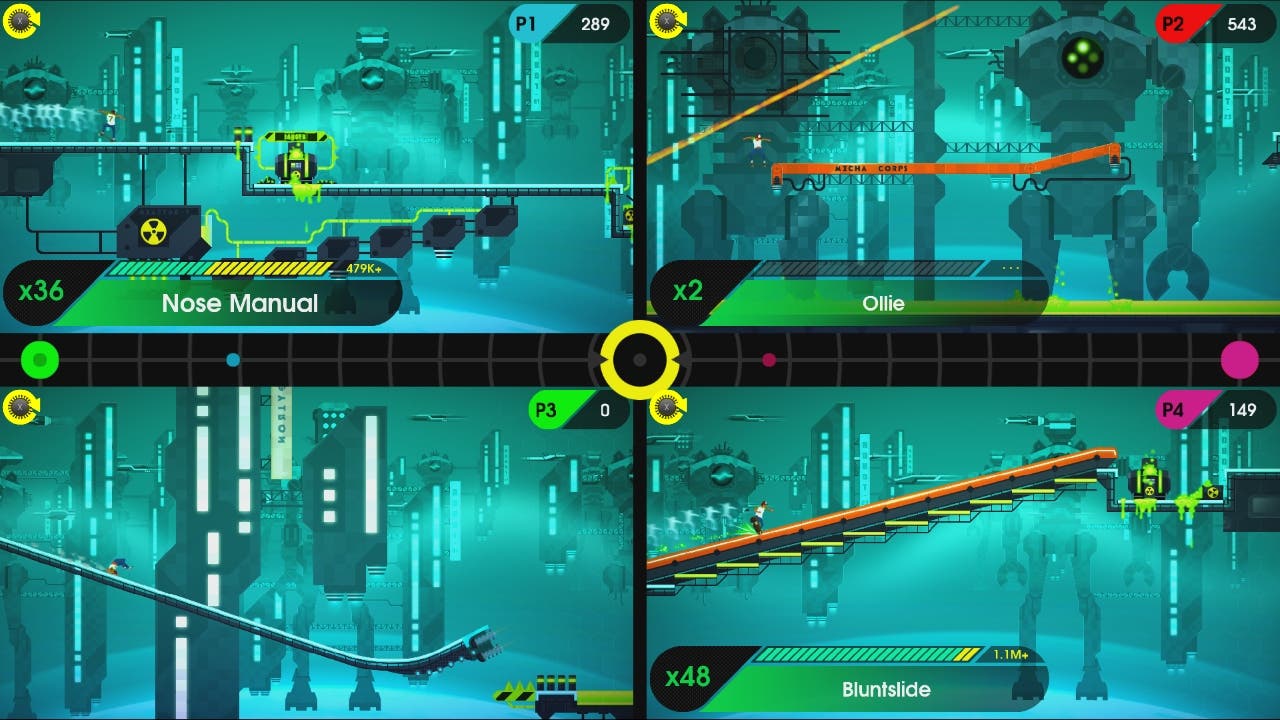 OlliOlli and OlliOlli 2 were beloved in their time for their tight mechanics, engrossing gameplay, great visual style and stellar soundtracks, and both games have aged incredibly well, to the point that they could be releasing for the first time today and still be extremely fresh and fun. Releasing both games on the Nintendo Switch feels like a kind of homecoming to a platform they were always intended to live on. OlliOlli: Switch Stance is the perfect companion for Nintendo’s hybrid console and whether you’re a series veteran or a first-time player, this is a title you should absolutely have.