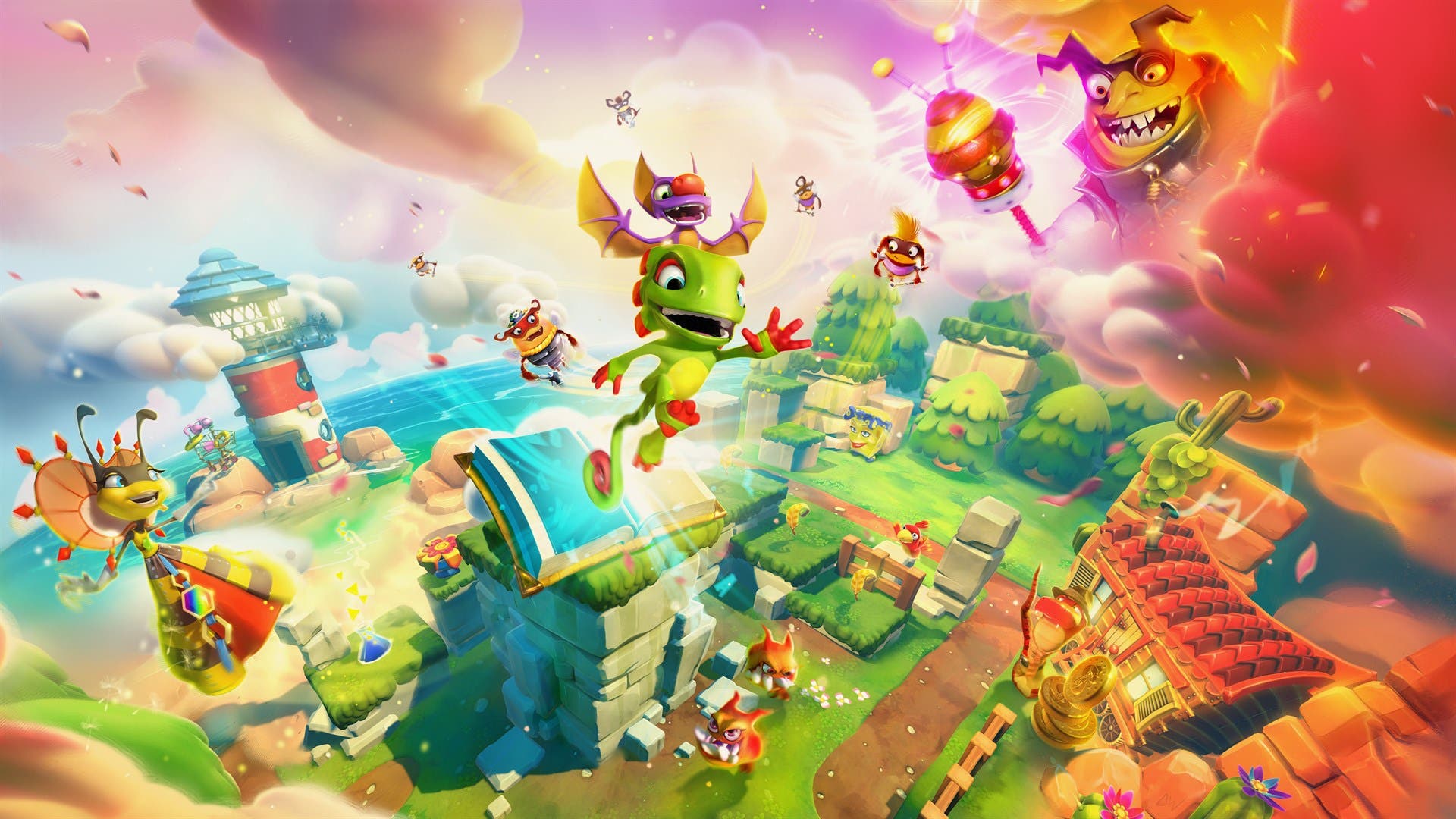 Yooka-Laylee and the Impossible Lair Review

When Yooka-Laylee released a few years ago, it was a triumphant return to 3D platformers from the past. It was reminiscent of games like Mario 64 and Banjo-Kazooie. When Yooka-Laylee and the Impossible Lair was announced, folks thought this might be a sequel, but instead it was later clarified we got was a spin off side project for the franchise. My biggest concern going into this was “would this be some sort of cheap cash grab to satisfy fans until the inevitable sequel?” Much to my surprise, while Impossible Lair is definitely a different spin on the franchise, it’s quality shines throughout.

The story here is simple enough, Queen Phoebe’s Royal Battalion Guard has been captured and the bad guy, Capital B, from the first game has taken over her land. Right from the start players are thrust into his Impossible Layer, but Yooka-Laylee are no much for the challenge.  So begins their quest to progress through the various areas of the over world, completing chapters, and rescuing the guard bee’s at the end of the level. These bees will later assist players in getting through the lair once and for all. It’s a great concept and the game even gives the notion players can complete The Impossible Lair without all the bees rescued. I didn’t dare challenge it but the idea that this can be done was a neat notion.

While the original Yooka-Laylee was inspired by traditional 3d platforms, Impossible Lair I would say has more in common with the Donkey Kong Country. As players explore and solve puzzles in the top down over world, chapters are presented as books, much like the first game.  Levels here though are presented in side scrolling fashion and players will run, jump, dash, and explore their way through each level, looking for special coin tokens, feathers, and hidden areas. When I say the game is heavily inspired by Donkey Kong, I mean it. Taking damage will have the two characters separated with a chance to get the bat back before disappearing, otherwise players need to find a bell to re-unite. When split, players also have less abilities to traverse the level making things a tad bit more difficult. Getting hit again results in a game over with a restore at the nearest checkpoint.  Checkpoints themselves are pretty abundant which is nice because the game is fairly challenging overall, with some greatly designed levels. An interesting aspect is that there is no lives system. Players are able to try the levels again and again from each further checkpoint they reach without worrying about having to start the level over completely. This is a wonderful change and kept me engaged in the levels even when failing multiple times.

Now I mentioned the levels being designed greatly, and this is both from a visual and level layout perspective. There is another huge reason I love the chapters in the game. Each chapter has two variations. When exploring the overall world which unlocks the new chapters, there are elements that can be applied to certain levels depending on the chapter. For example, one over world change that allows water to flow into a canal ends up flooding over a chapter book. Now going back into the world it’s flooded and the entire design of the level and how it plays out is changed. This was just fantastic to experience as levels I played already became a completely different experience. One level even had honey spilling into it and now the entire world had the sticky substance all over, allowing Yooka-Laylee to climb up walls but also it slowed them down during some normal traversal. Its elements like this that really show how well the game has been designed and pieced together and it offered excitement seeing just what the second variation of the levels had in store.

Speaking back on the over world, it’s a wonderful way of letting players explore a hub world which in many ways feels similar to something like The Legend of Zelda. Players will explore the hub, unlocking new shortcuts and abilities, finding new chapters to explore, and how to change those chapters to the second version. There are also gates that require a certain amount of coins to open new sections of the world map. This makes finding some of those hidden coins on each chapter a little bit mandatory. They don’t required a ton to unlock fortunately but it’s still a form of gate keeping some players might not enjoy. My best suggestion is to explore as players can on the levels and more than likely enough coins will be found to prevent any sort of replaying or backtracking.  Some of the areas of the map can also transform by doing Page challenges and these are rather simple, but also felt the most disappointing. The challenges are extremely basic most the time and take place on a screen that looks awfully devoid of charm unlike the rest of the game that’s bustling with colors. There so simple and quick that it’s not a major issue, but they noticeable stick out in a game that otherwise shines everywhere else. There are also secrets hidden all over the hub world. One such item is tonics, which allow players to add either buffs, challenges, or visual changes to their experience. One tonic might add cinematic aspect ratio bars. Another allows any of those coins players find to be kept, even when dying, but at the cost of some feathers being traded in at the end of the level. These are fun to find and change out. 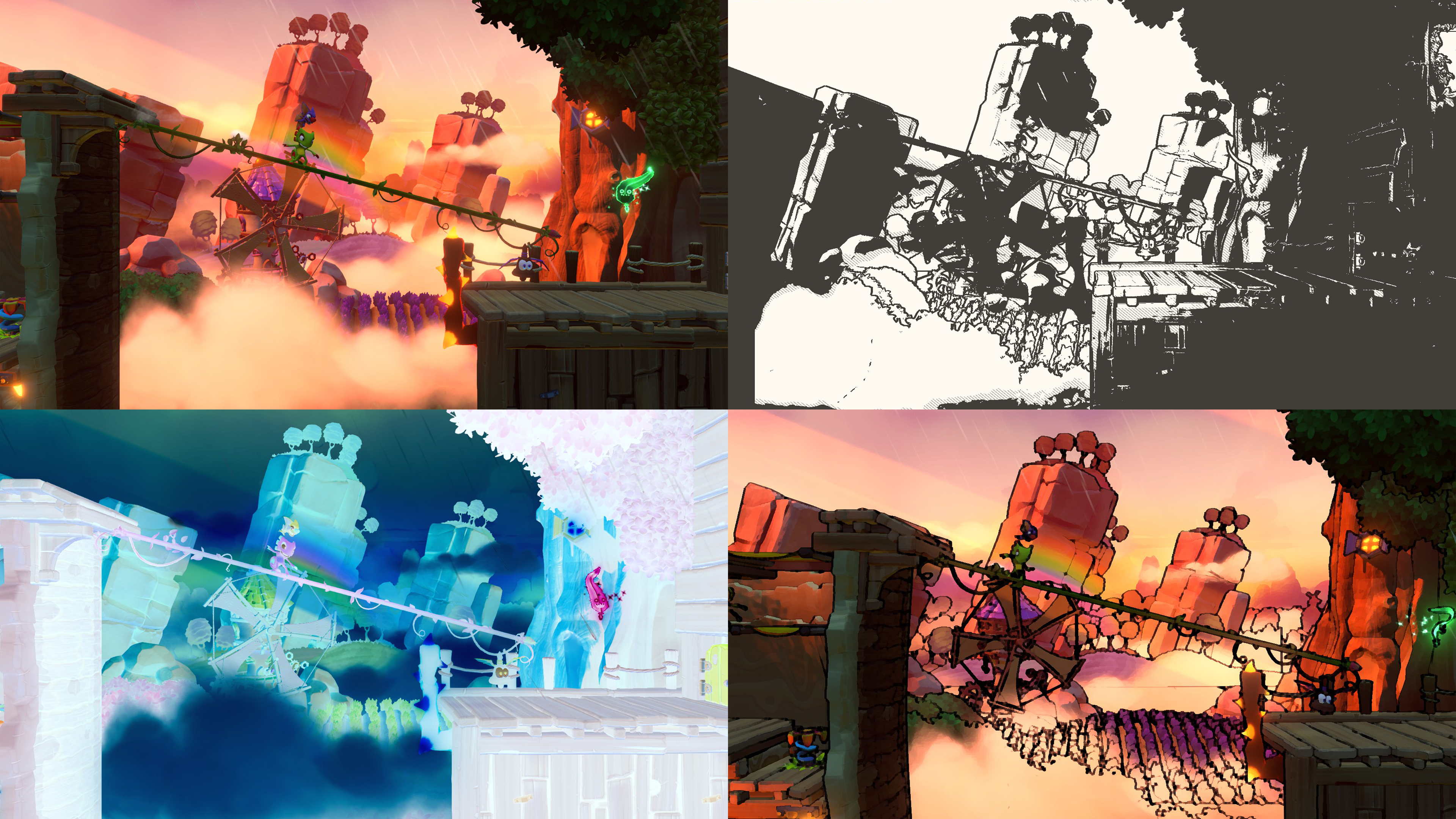 Yooka-Laylee and The Impossible Lair is such a surprise hit. Featuring challenging platforming, the pacing of it keeps up. It’s allows players to consistently push against the challenge. The design of no traditional lives counter really keeps things flowing. Meanwhile the exploration aspect of the hub world offers a totally new experience all on its own, even if it’s not the focus, it’s an addition I ended up loving. While some spin off games from franchises come off feeling like an incompletely experience or lesser experience of the original, I find The Impossible Lair an excellent addition to the franchise. A platformer that clearly takes inspiration from one of the best side scrolling games ever, Donkey Kong Country Tropical Freeze, and molds it into its own. As a side scrolling fan, this is one I recommend folks not pass up.  Charming, colorful, and runs extremely well on the Nintendo Switch, a perfect companion piece to the original game.